New reporting based on whistleblower interviews and internal documents reveals Facebook knew the dangers its groups feature poses in organizing users around harmful ideologies, including “Stop the Steal” and anti-vaccine misinformation, but the platform refuses to fix the problem. In fact, Media Matters’ latest analysis has identified over 1,000 active Facebook groups dedicated to promoting COVID-19 or election misinformation, with over 2.2 million combined members.

On October 7, Facebook whistleblower Frances Haugen met with a consortium of journalists from U.S. media outlets and offered to share redacted versions of internal Facebook documents, dubbed “the Facebook Papers.” These outlets started publishing reporting about the documents on October 22, releasing dozens of articles about Facebook’s own research on its role in amplifying misinformation, hate speech, extremism and violence -- both domestically, particularly after the 2020 election, and internationally, including in India and Ethiopia.

Publicly, the company has been promoting its groups feature for years while it has done little to proactively prevent fringe individuals and organizations from using it to organize and spread harmful ideologies, conspiracy theories, and misinformation. Meanwhile, its own internal research warned of the threat such groups pose.

This year, Facebook reportedly conducted research on “harmful topic communities” such as those dedicated to the QAnon conspiracy theory, COVID-19 denial, “Stop the Steal,” and anti-vaccine efforts. According to NBC News, one internal report by Facebook found that the anti-vaccine movement “closely resembled” QAnon and Stop the Steal movements and how they spread on the platform.

A separate cross-department group reported this year that vaccine hesitancy in the U.S. “closely resembled” QAnon and Stop the Steal movements, “primarily driven by authentic actors and community building.”

“We found, like many problems at FB,” the team wrote, “that this is a head-heavy problem with a relatively few number of actors creating a large percentage of the content and growth.”

“The power of community, when based on harmful topics or ideologies, potentially poses a greater threat to our users than any single piece of content, adversarial actor, or malicious network,” a 2021 report concluded.

Another internal study reportedly found that the risk of offline violence or harm is greater when like-minded individuals embracing harmful topics, such as the QAnon conspiracy theory, come together and support one another to act -- exactly what happened with election fraud conspiracy theorists on January 6.

*We categorized the topic of a group by its general focus based on its name and description. Many of these groups contain posts about multiple COVID-19 topics.

These public and private Facebook groups are filled with COVID-19 misinformation and provide a space to organize against preventative measures to reduce the spread of COVID-19: 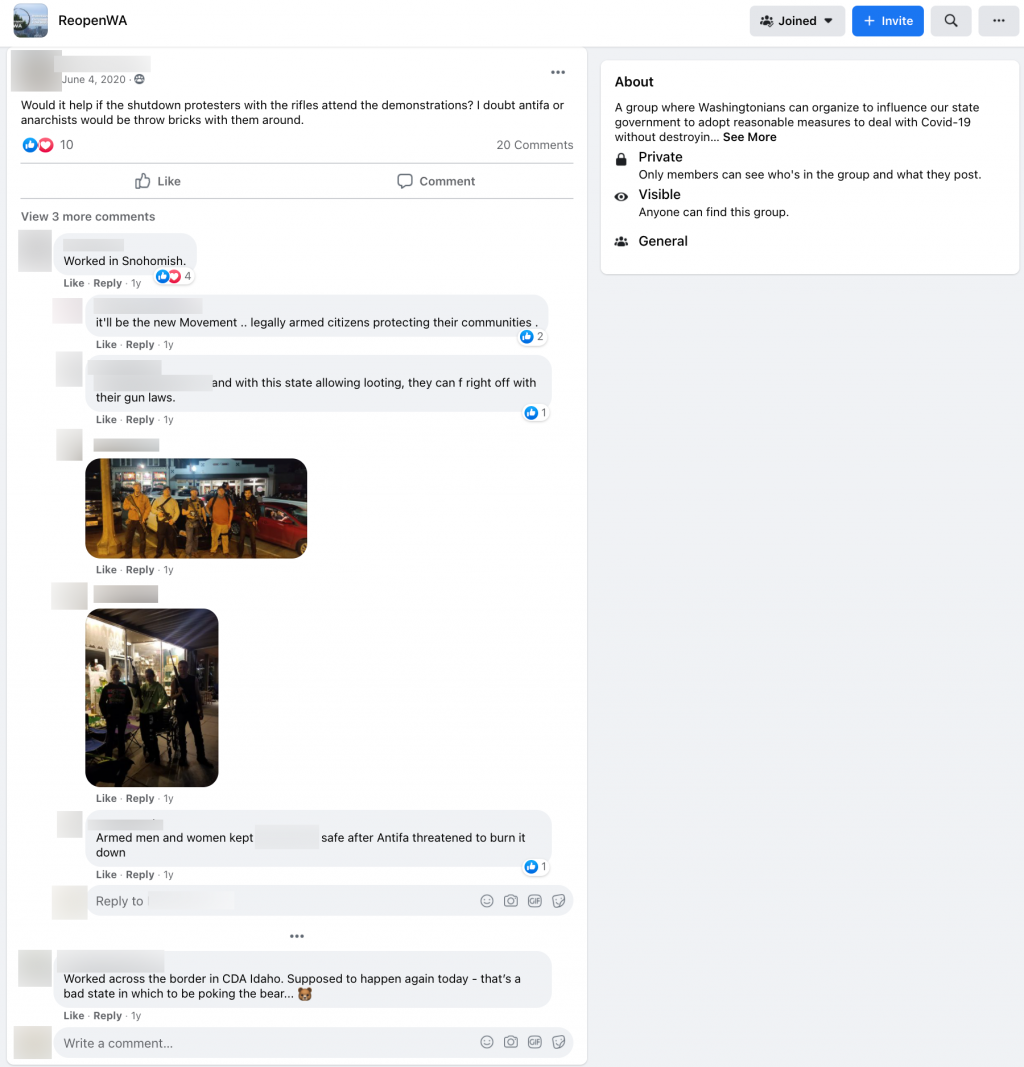 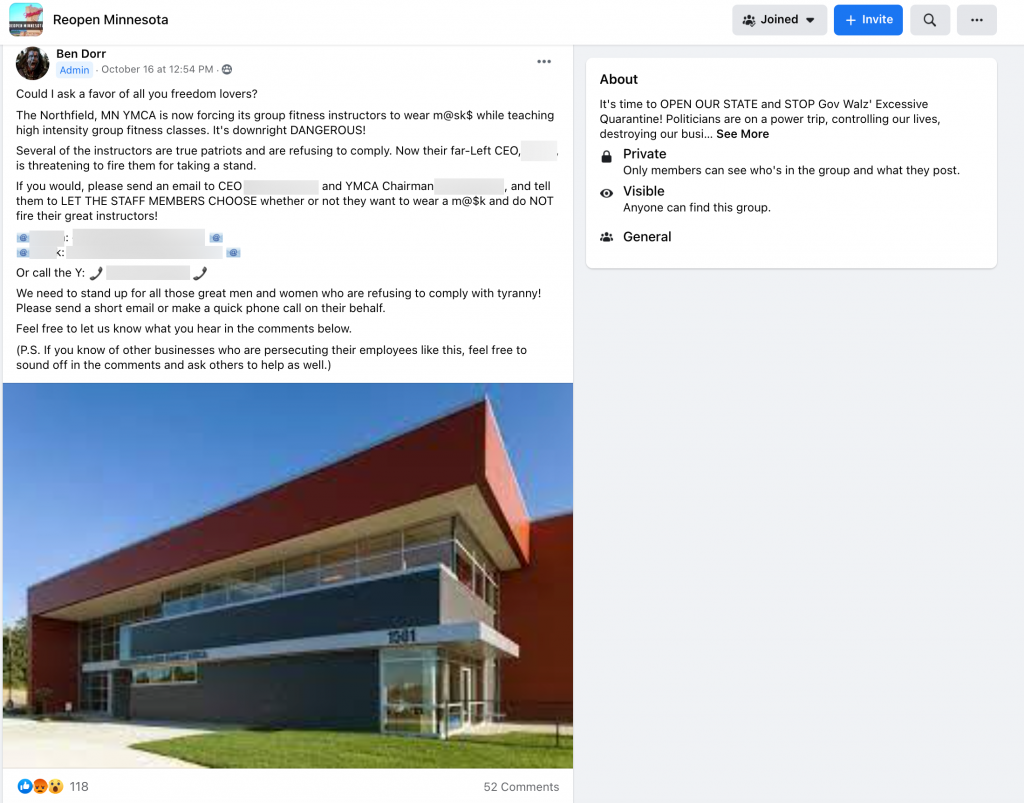 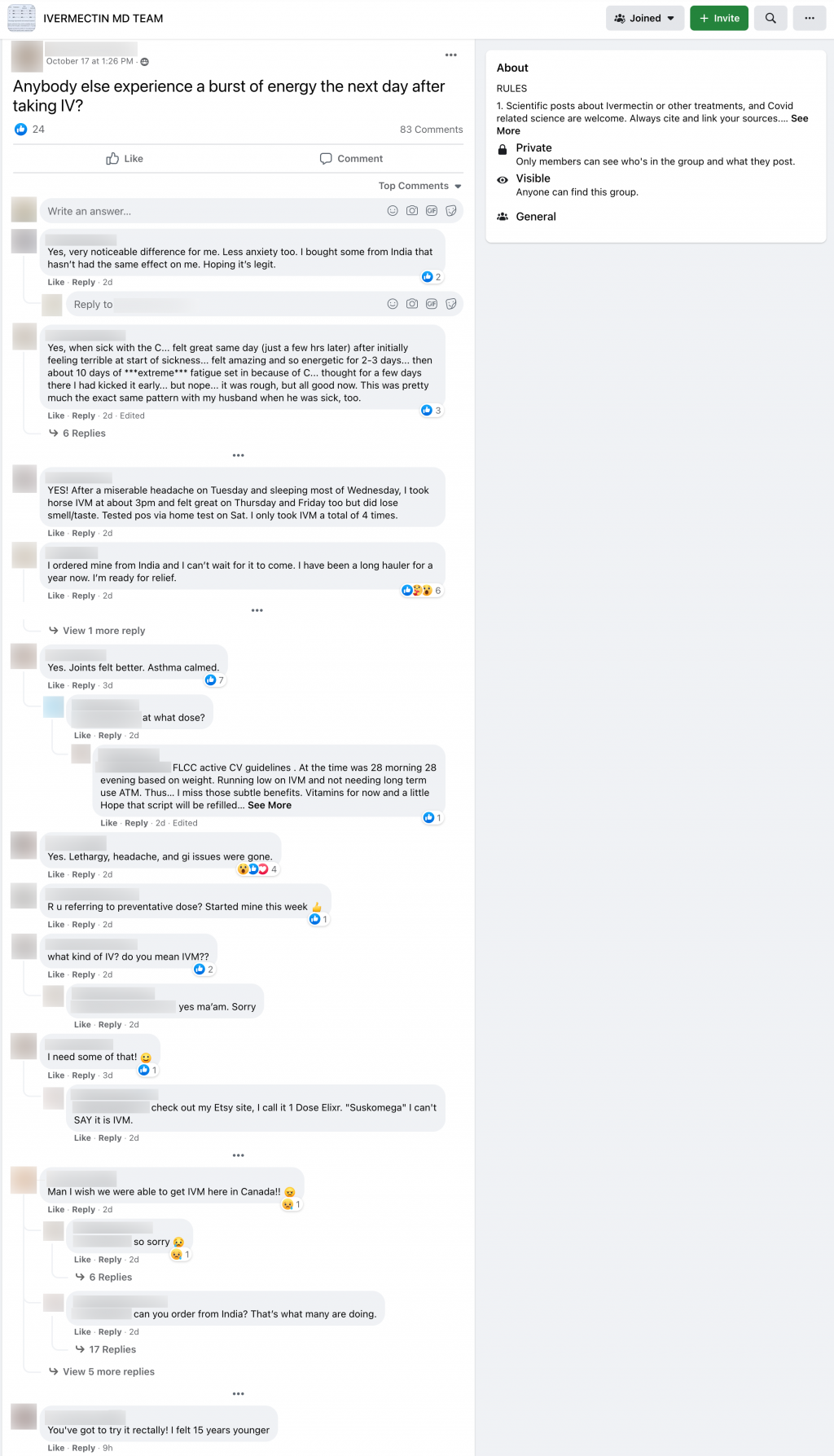 Facebook has previously failed to remove similar groups that seemingly violate its policies related to COVID-19 and vaccine misinformation, despite numerous reports from Media Matters and others highlighting the problem since the early days of the pandemic.

Last year, disinformation research organization First Draft found more than 100 state-specific groups created during a two-week period in April 2020 to protest stay-at-home orders being implemented to mitigate the spread of COVID-19. The groups gained more than 900,000 combined members during that short time.

More recently, Media Matters found at least 284 public and private anti-vaccine Facebook groups active on July 20 that were regularly spreading COVID-19 vaccine misinformation and/or conspiracy theories. They had over 520,000 combined members. (A week after that reporting, nearly 85% of the groups were still active.)

In September, we identified another 60 Facebook groups with nearly 65,000 combined members which promoted the use of ivermectin as a preventative or treatment for COVID-19, even as federal agencies warned that the drug was not approved for use for COVID-19. In fact, these groups were filled with users asking where to acquire ivermectin and seeking information on dosage and drug combinations. A month after our reporting, 37 of the 60 groups were still active.

Facebook has similarly failed to remove groups that seemingly violate its policies against election misinformation -- even after the platform’s admitted failure in recognizing the coordinated effort to delegitimize the 2020 election. We’ve identified at least 203 currently active Facebook groups pushing election misinformation, with over 217,000 combined members.

We’ve identified 24 groups that specifically mention “Stop the Steal” or similar language about a stolen election in their name and 179 additional groups related to election fraud or voter integrity.

These groups are filled with election misinformation and conspiracy theories: 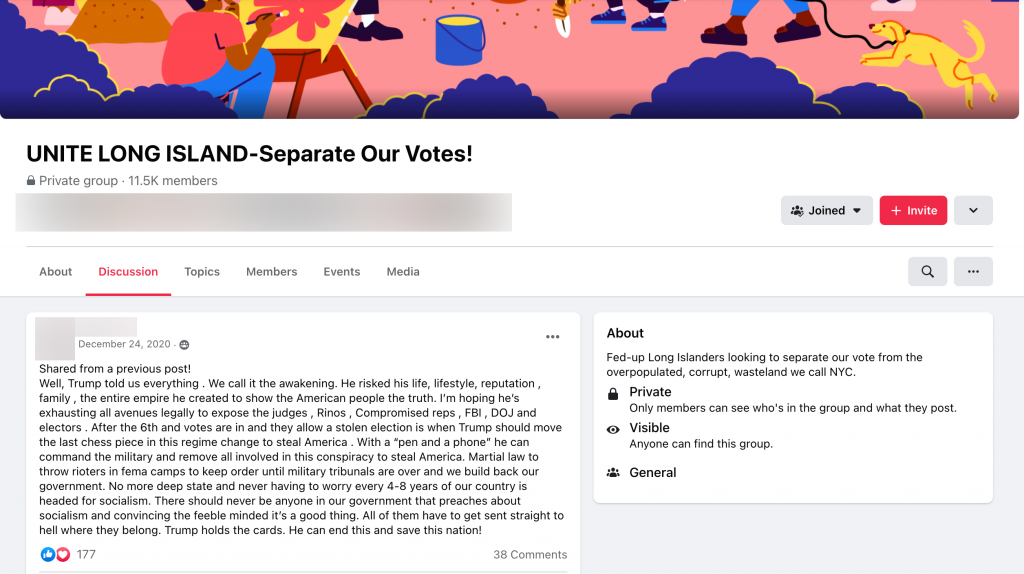 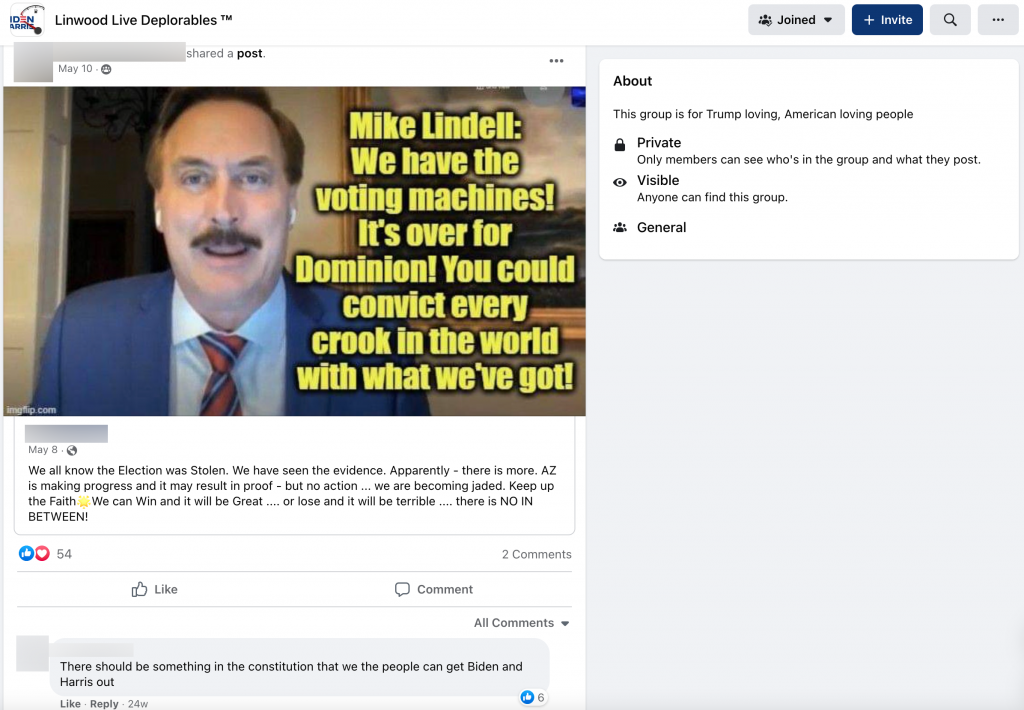 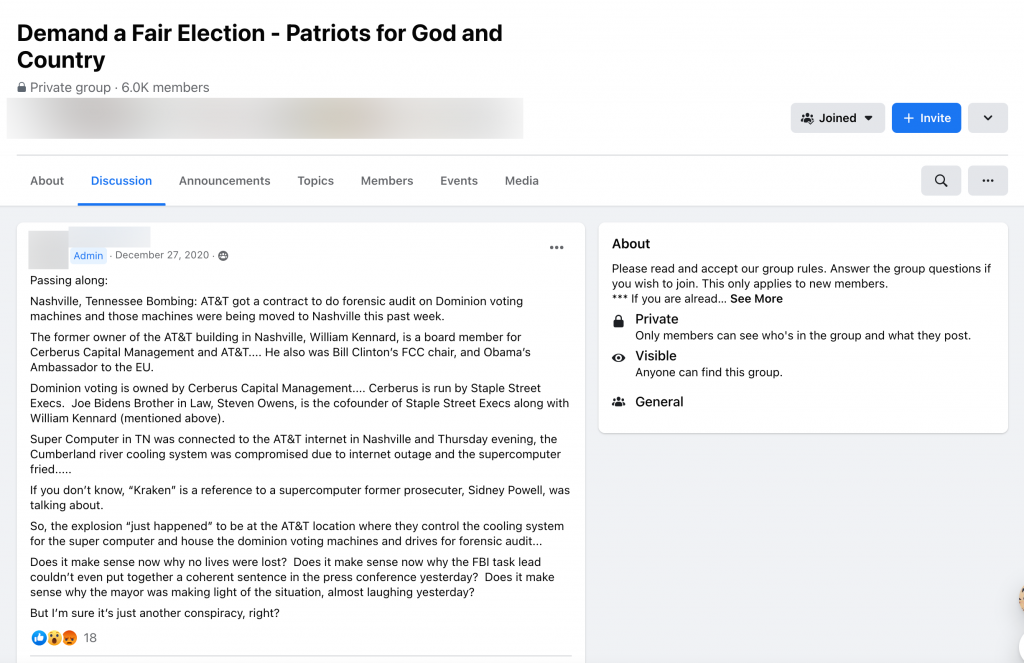 Unfortunately, the spread of election misinformation is not a new problem for Facebook.

On November 17, 2020 -- just 10 days after Joe Biden was declared president-elect -- Facebook CEO Mark Zuckerberg boasted to the Senate Judiciary Committee that the platform’s “systems performed well” during the election cycle. He failed to discuss the ways the company had profited from enabling the Trump campaign and right-wing media to relentlessly spread election misinformation.

In fact, Facebook whistleblower Frances Haugen later revealed that the company actually removed its election safeguards right after the election “because they wanted that growth back,” adding that the platform “had to 'break the glass' on January 6 and turn them back on.”

These relaxed safeguards between the election and January 6 allowed the spread of the “Stop the Steal” campaign, which Facebook has since acknowledged was “a coordinated effort to delegitimize the election” -- even though the company previously tried to minimize its own culpability. Before January 6, Media Matters and other outlets, all without access to the substantial data available to Facebook employees, had reported extensively on the presence of election misinformation and “Stop the Steal” narratives on Facebook.

In fact, we reported on as many as 91 Facebook groups that specifically mentioned “Stop the Steal” or used similar language about a “stolen election” in their name or within posts, as well as an additional 139 groups related to the topic of so-called election fraud. At least 34 groups were created on or before November 5.

Even before the attack on the U.S. Capitol, it was clear to outside researchers that many of these Facebook groups were concerned with more than just idle discussion. As but one example, we warned on January 5 that users in private groups were encouraging each other to break Washington, D.C., gun laws ahead of the pro-Trump protests scheduled for January 6.

After the Capitol insurrection, Facebook announced plans to remove any “content containing the phrase ‘stop the steal,’” but we quickly found that Facebook’s ban was extremely limited, seemingly applying only to posts or groups using that exact phrase. On January 28, we found at least 23 “Stop the Steal” groups and 129 groups related to so-called election fraud that remained active. Since then, only one additional “Stop the Steal” group of those 23 has been removed from Facebook, and election misinformation continues to thrive on the platform.