White House press secretary Jen Psaki singled out Facebook as needing to do more to combat Covid-19 vaccine misinformation on its platform. Meetings between the Biden administration and Facebook in recent weeks have been "tense," a source familiar with the conversations told CNN.

“Facebook needs to move more quickly to remove violative posts. Posts that will be within their policies' removal often remain up for days. That's too long. The information spreads too quickly," she said at Thursday's press briefing.

President Joe Biden went as far as saying that Facebook is “killing people” -- though he has since clarified his statement -- and Facebook quickly responded to the administration’s concerns, claiming that “when we see misinformation about COVID-19 vaccines, we take action against it.” The platform has boasted of how many false and misleading posts it removed during the pandemic, but refuses to report the prevalence of anti-vaccine misinformation. (Facebook reportedly declined a request from its own data scientists for resources to help track misinformation on the platform at the start of the pandemic.)

Media Matters’ latest review shows that the company is either being dishonest or willfully ignorant. We identified at least 284 public and private anti-vaccine groups that are currently active on Facebook, which is more than double the 117 anti-vaccine groups we reported on in April. These groups expose their roughly 520,000 combined members to harmful COVID-19 vaccine misinformation and, as nearly 60% of these groups are private, it is more difficult for Facebook to moderate them.

Despite Facebook’s claims of taking action against COVID-19 vaccine misinformation, these groups continue to replicate and grow even as researchers try to hold Facebook accountable. In April, for example, Media Matters identified “MTHFR Connections: Tongue Ties, Autism, V@xynes, Leaky Gut,” a private anti-vaccine group dedicated to a baseless claim that the MTHFR gene causes a harmful reaction to the COVID-19 vaccine. Despite our reporting, the group is still active and is now one of the largest anti-vaccine groups on the platform, with nearly 28,000 members.

Even when Facebook removes a group for coronavirus-related misinformation, the platform still allows users to make nearly identical backup groups to evade its policies. On April 22, Facebook removed a large private group, COVID19 VACCINE VICTIMS AND FAMILIES, dedicated to gathering stories of people allegedly injured by the COVID-19 vaccine after it amassed more than 125,000 members. Since removal, there have been at least two more iterations of the group -- one of which has roughly the same name, has been active since May, and is one of the largest anti-vaccine groups we found, with over 46,000 members.

Facebook’s content policy against vaccine misinformation specifically states that it removes claims that COVID-19 vaccines kill or seriously harm people, inaccurate claims about how the COVID-19 vaccine was developed or its ingredients (such as that it contains microchips or “the mark of the beast”), and claims involving conspiracy theories about a COVID-19 vaccine or vaccination program.

Of the 284 active anti-vaccine Facebook groups that Media Matters identified, six groups have over 15,000 members -- and each of them has content that violates Facebook’s stated policy against COVID-19 vaccine misinformation.

This public group with more than 93,000 members promotes misinformation about the COVID-19 vaccine, anti-vaccine rallies, and conspiracy theories: 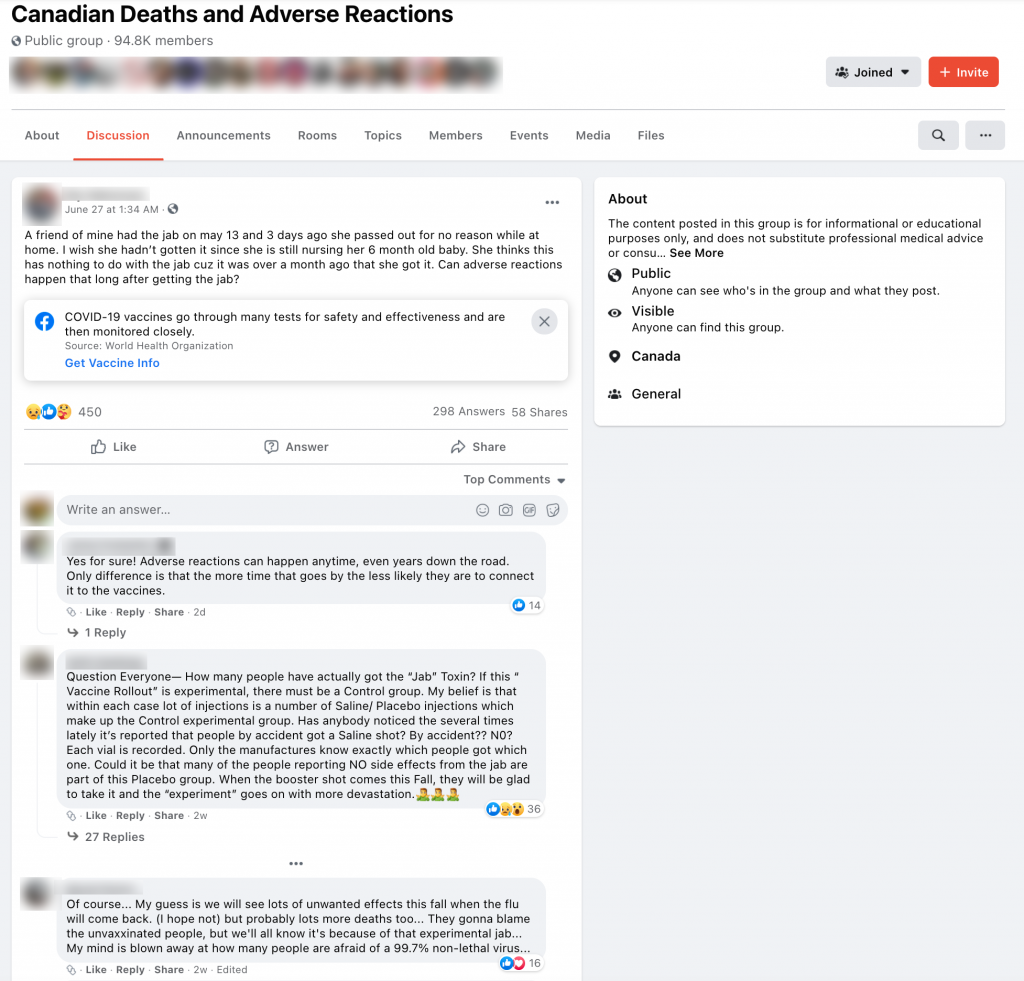 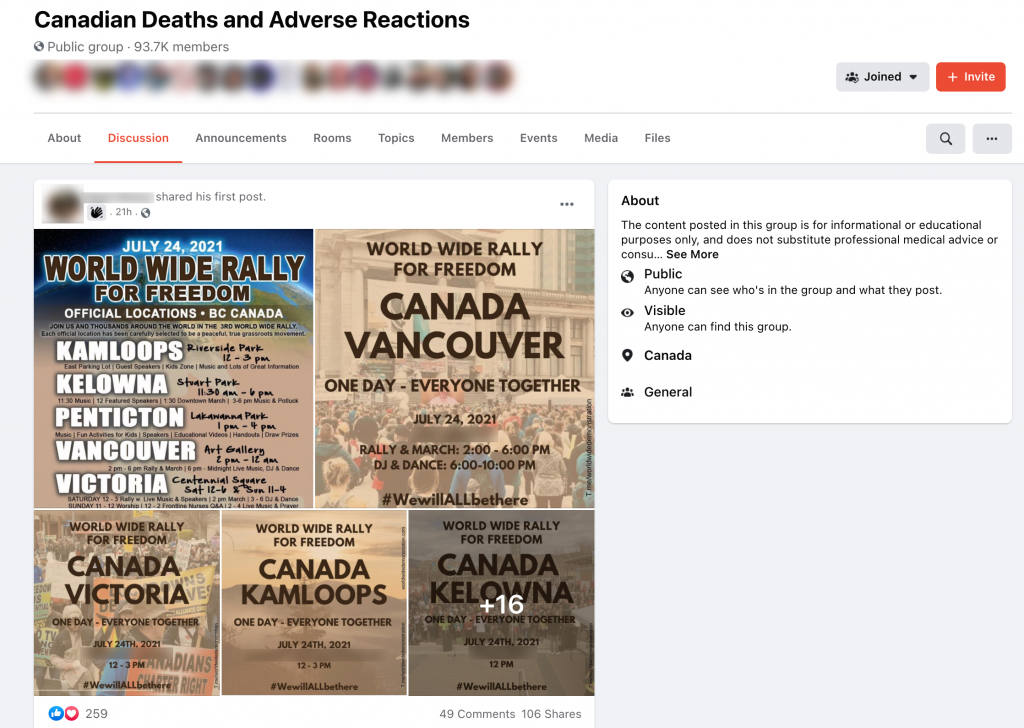 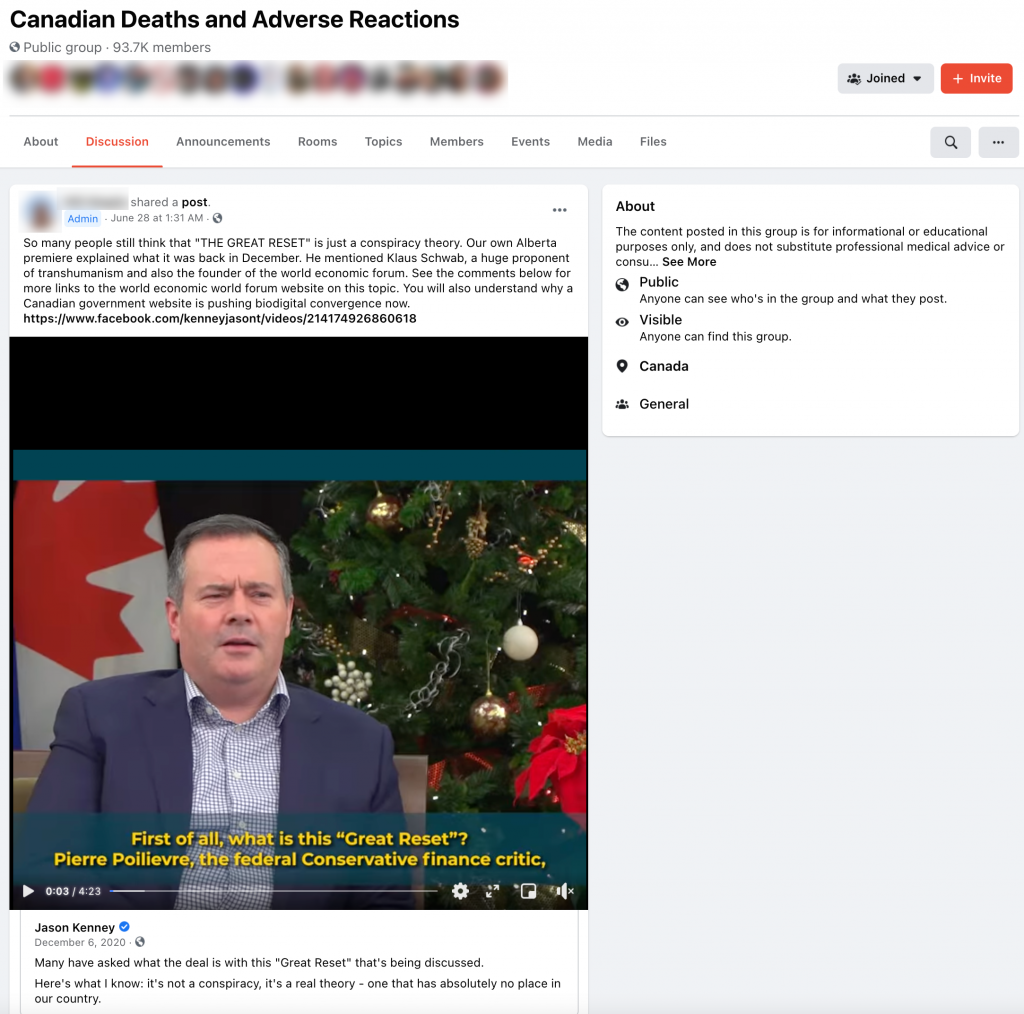 This private group, which is a backup for another anti-vaccine group that was previously removed by Facebook, has over 46,000 members centered around sharing stories about friends and family who they baselessly claim died because of -- or had serious side effects from -- the COVID-19 vaccine: 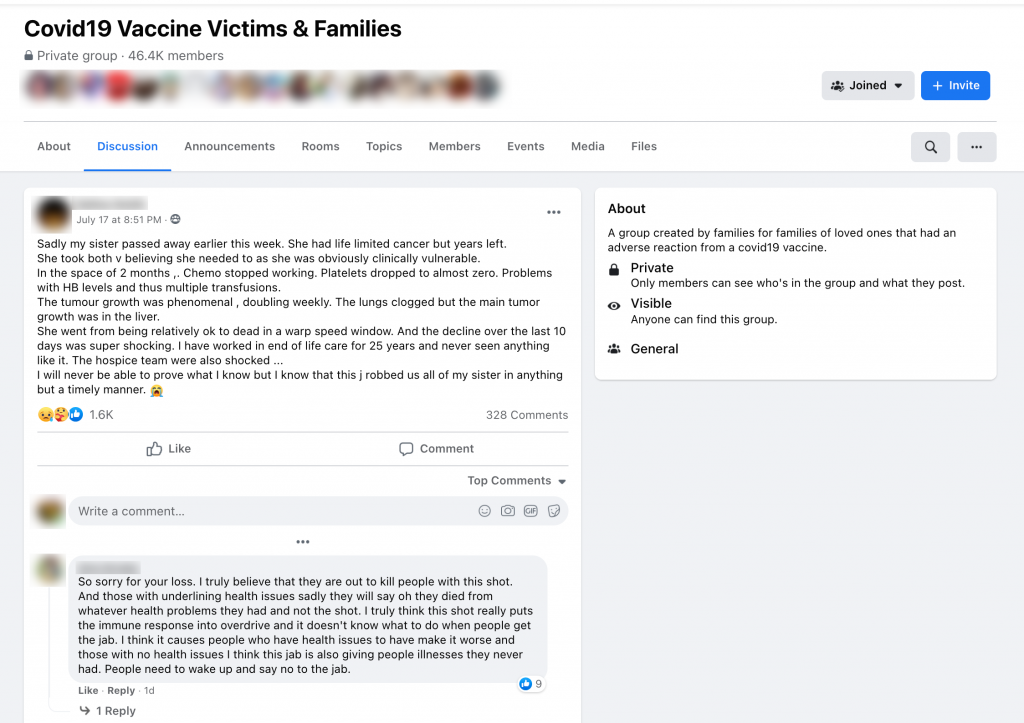 This private group with nearly 28,000 members is still active on Facebook, even though Media Matters reported on it in April. Members in the group continue to promote the baseless claim that the MTHFR gene causes a harmful reaction to the COVID-19 vaccine and provide each other with medical misinformation from anti-vaccine influencers: 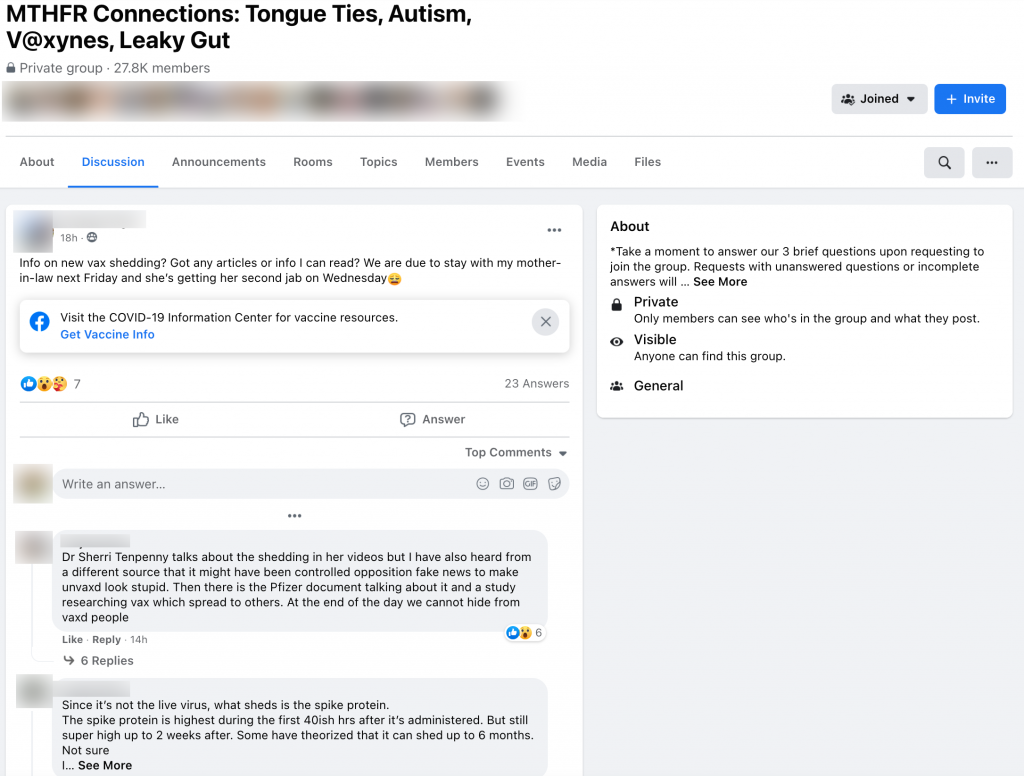 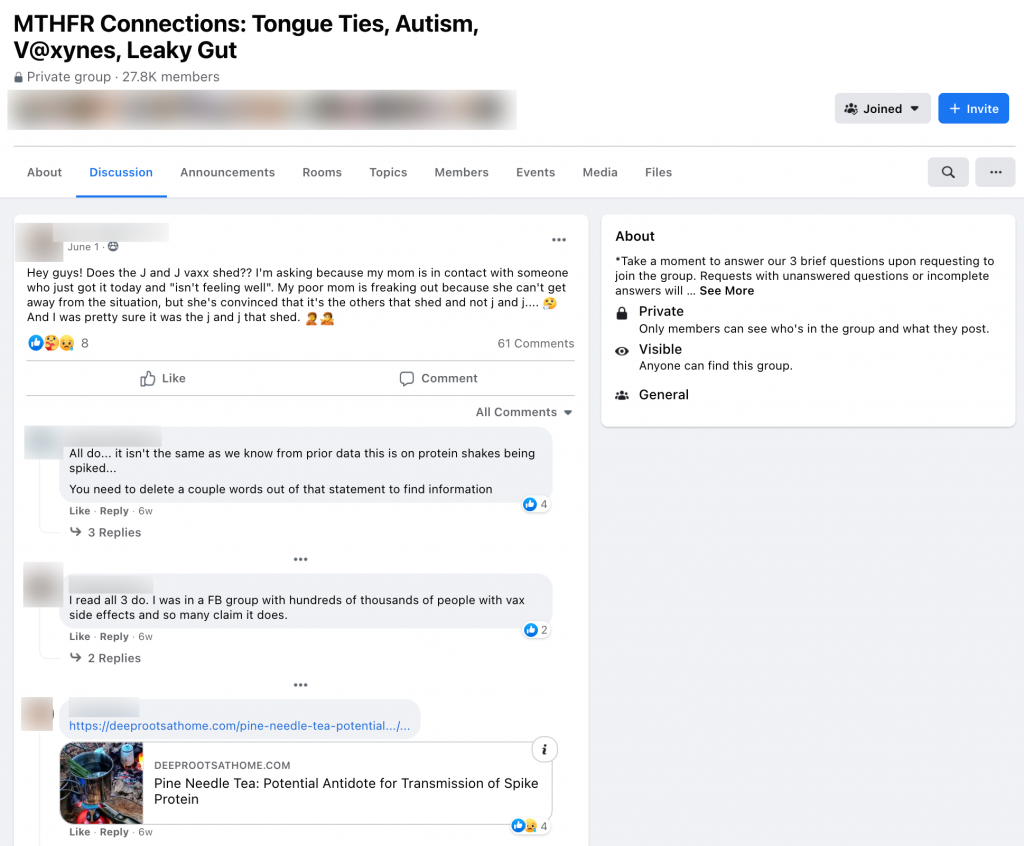 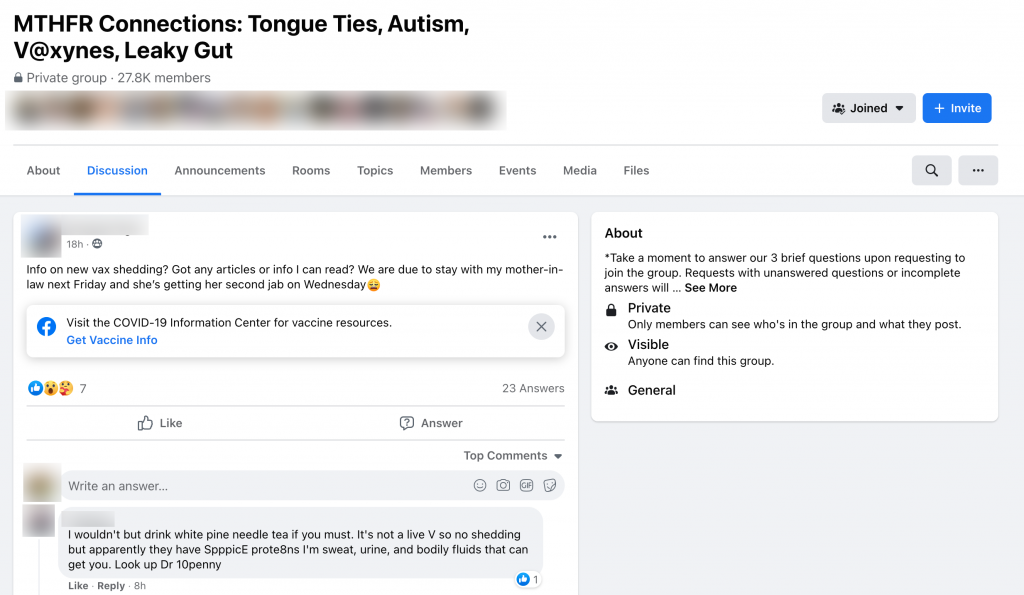 DONT SHED ON ME LITIGATION

This private group, with a name that references the debunked claim of vaccine “shedding,” has over 18,000 members and promotes anti-vaccine rallies and conspiracy theories: 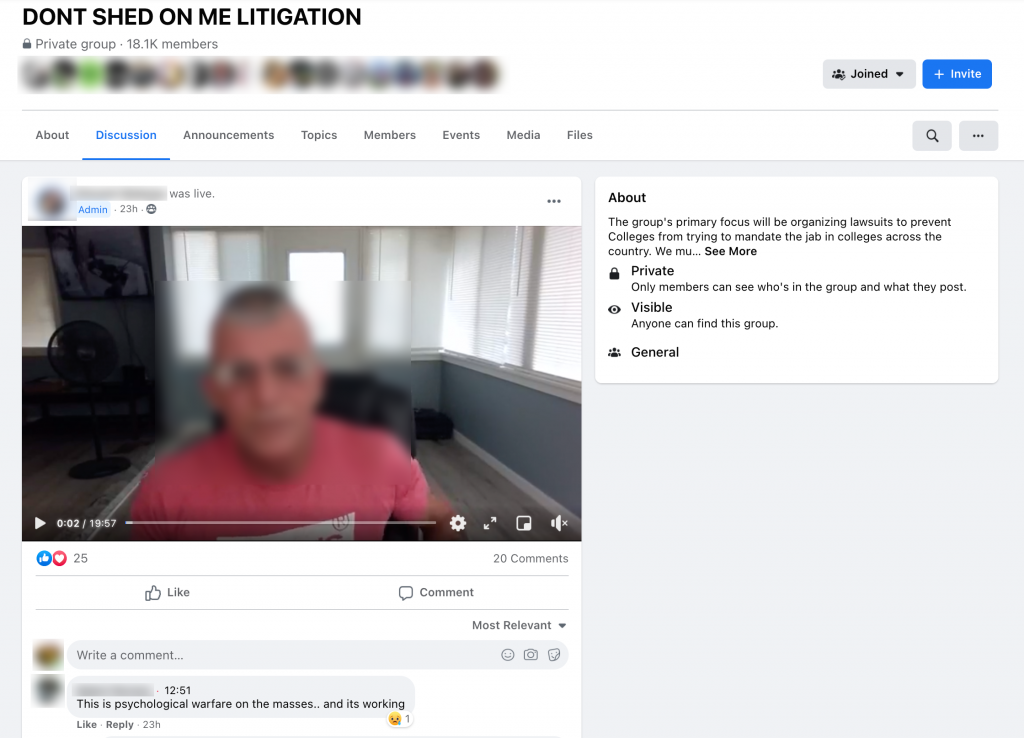 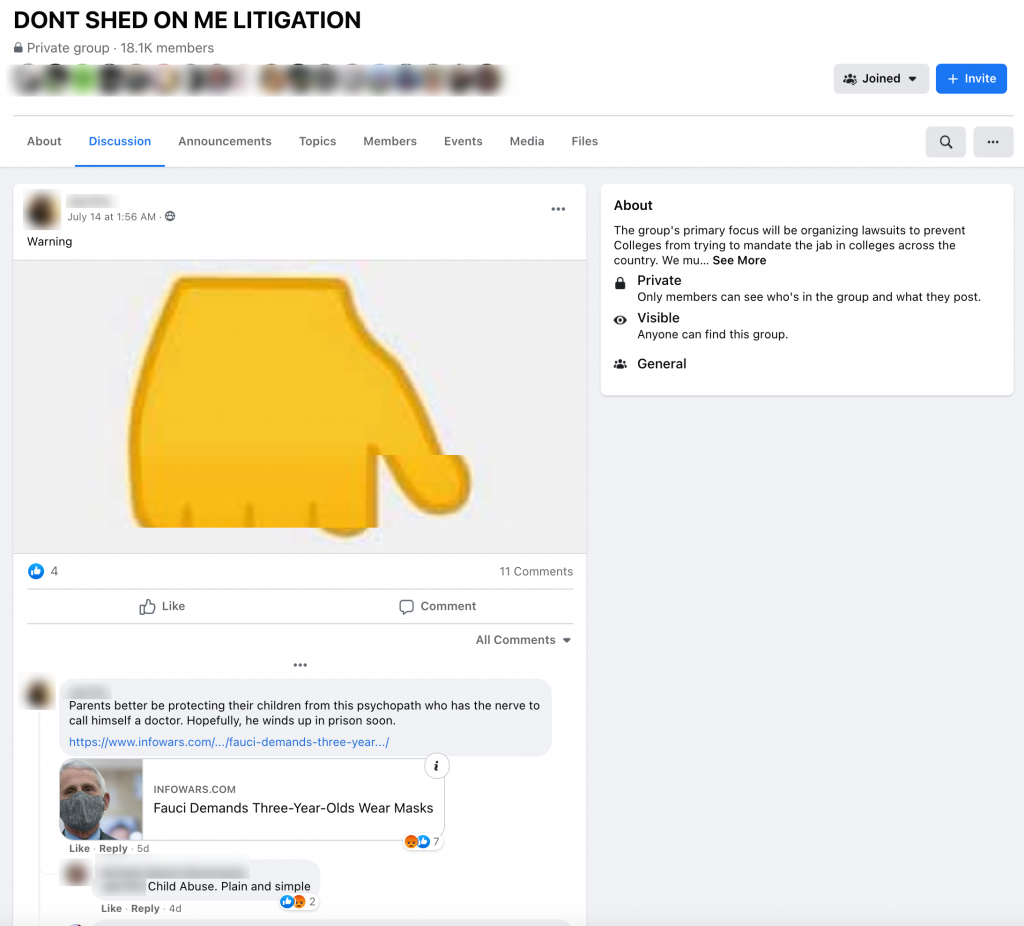 There are over 17,000 members in this private group, although it appears from its description to have previously been public. Many posts promote unfounded cures for COVID-19, alleged prevention strategies against the virus, or outright denials about the safety of the vaccines. Members have also used the group to share videos of Judy Mikovits -- a source behind the viral COVID-19 conspiracy theory film Plandemic. 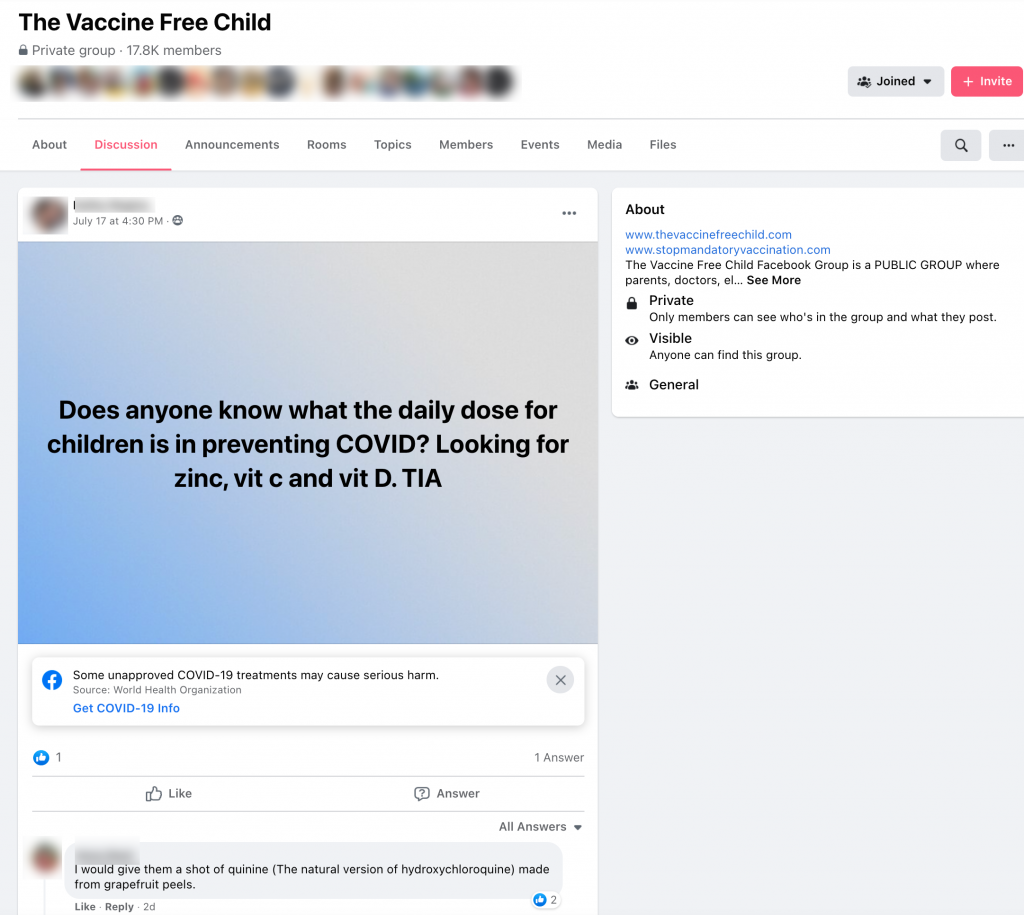 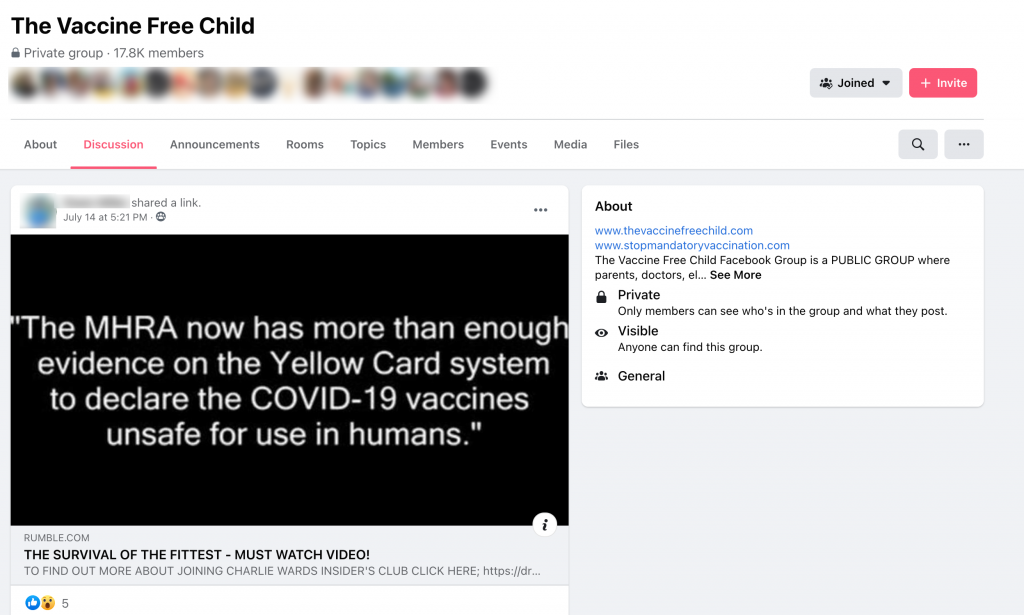 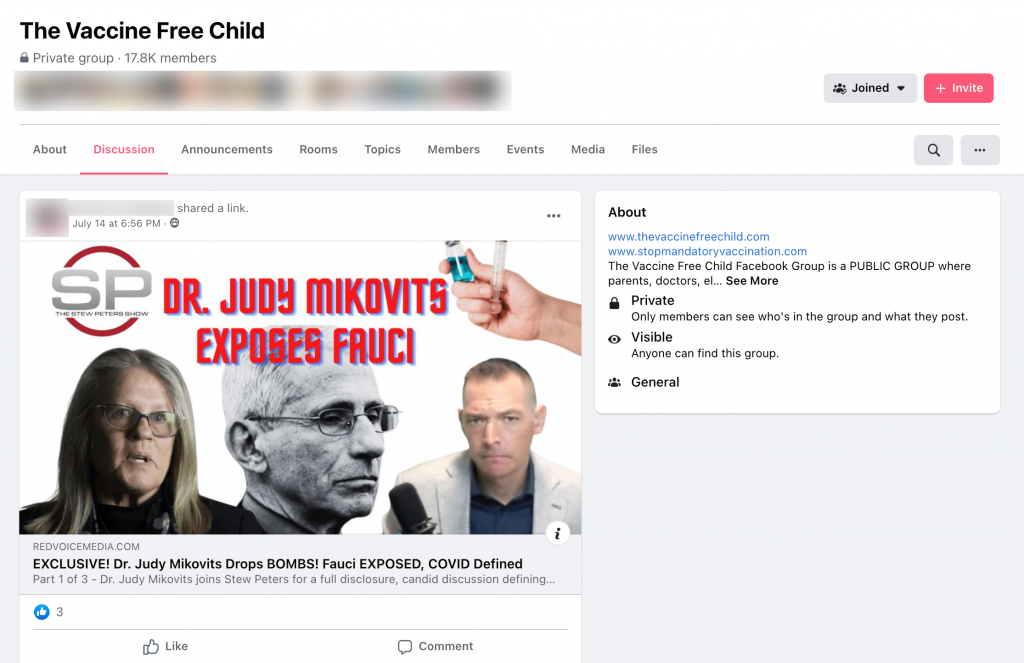 This private group, which was created as a backup, has more than 17,000 members and informs new users upon joining that the group contains posts that violate Facebook’s Community Standards. The group members share ideas and support for how to remain unvaccinated -- for instance, by promoting printable cards that read: “I do not consent to forced medication.” 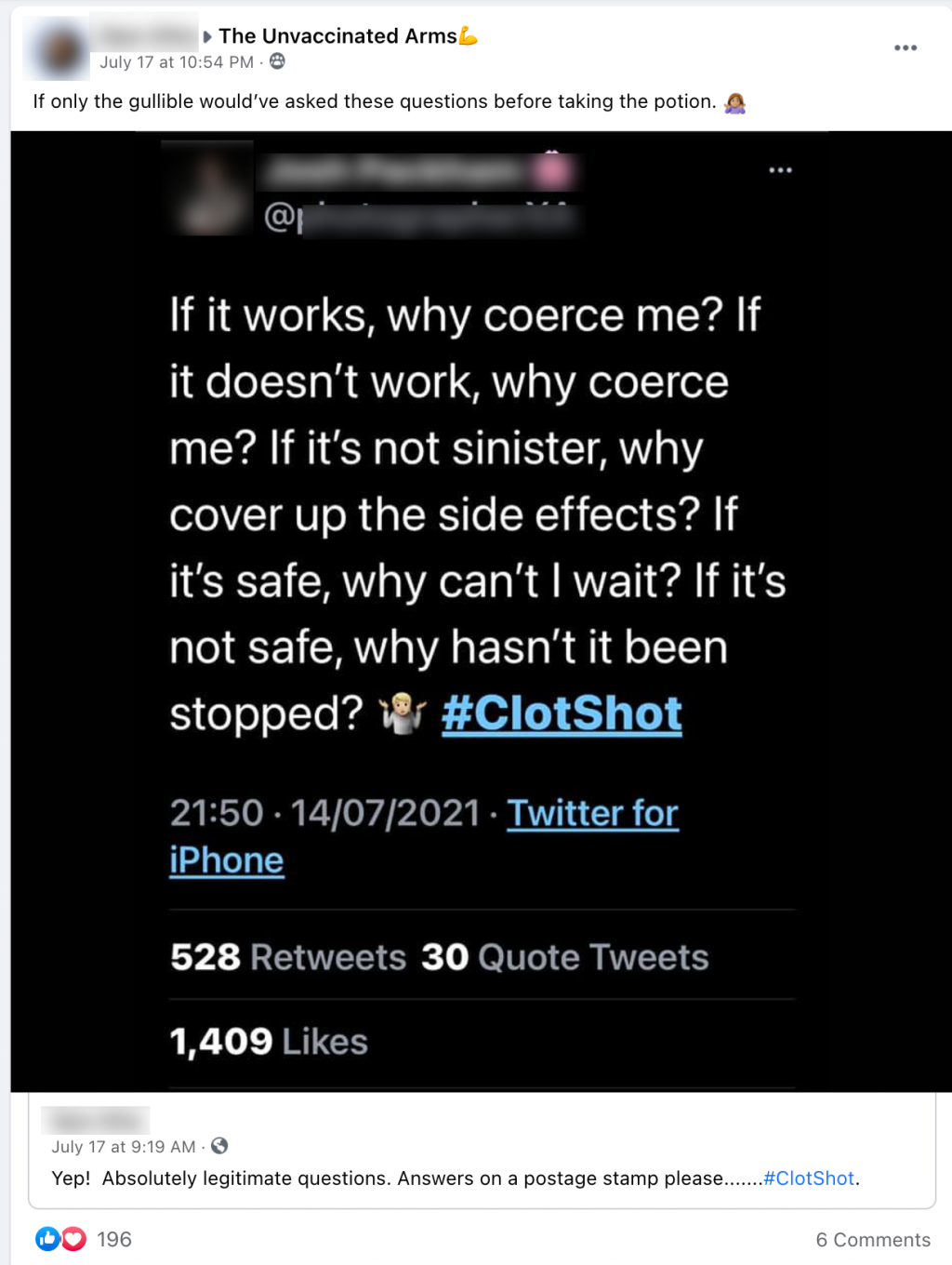 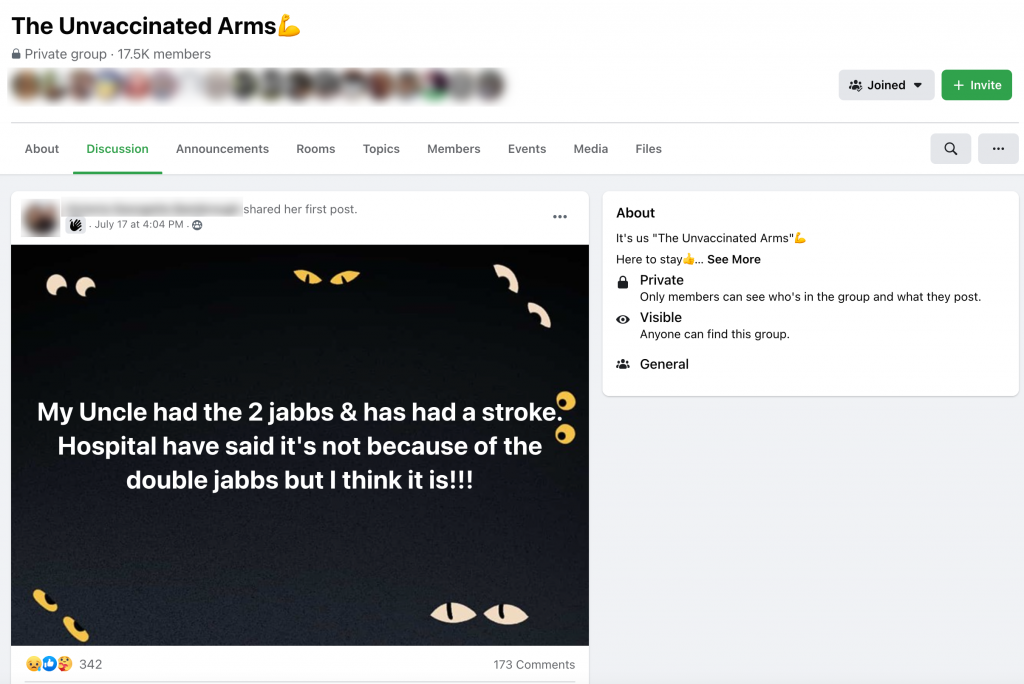