Facebook is once again contradicting itself: Despite its claims that the platform puts comprehensive “information labels” on content related to the 2020 election, Media Matters has found that misinformation about the sham Arizona “audit” spread on the platform unlabeled.

Former Facebook data scientist Frances Haugen has claimed that the platform took down the “safety systems” in place for the 2020 election shortly after Election Day and dissolved the Civic Integrity unit, which focused on risks to elections. After these changes, misinformation festered on the platform in the lead-up to the January 6 insurrection at the U.S. Capitol.

During testimony on October 5 to the Senate Subcommittee on Consumer Protection, Product Safety, and Data Security, Haugen specifically noted that “Facebook changed those safety defaults in the run-up to the election because they knew they were dangerous. And because they wanted that growth back, they wanted the acceleration on the platform back after the election, they returned to their original defaults.”

Following Haugen’s testimony to the subcommittee, Facebook Vice President of Content Policy Monika Bickert pushed back, claiming she is “very proud” of the work the company did before and after the 2020 election, including its use of “informational labels.”

On September 24, the illegitimate and widely criticized “full forensic audit” of Arizona’s votes reaffirmed that President Joe Biden won the state during the 2020 election, including in Maricopa County. After that, Media Matters found posts in various pro-Trump and anti-Biden Facebook groups pushing false and misleading claims about the “audit” results, sharing news articles with unchecked misinformation, and calling for the election to be decertified. None of these posts have been fact-checked or labeled by Facebook, even though it promised to label all posts that attempt “to delegitimize the election results,” and the company’s executives like Bickert continue to claim victory against election misinformation.

Some posts that were shared in public and private groups contain debunked claims that the “audit” uncovered fraudulent votes. These posts were not labeled or fact-checked by Facebook. 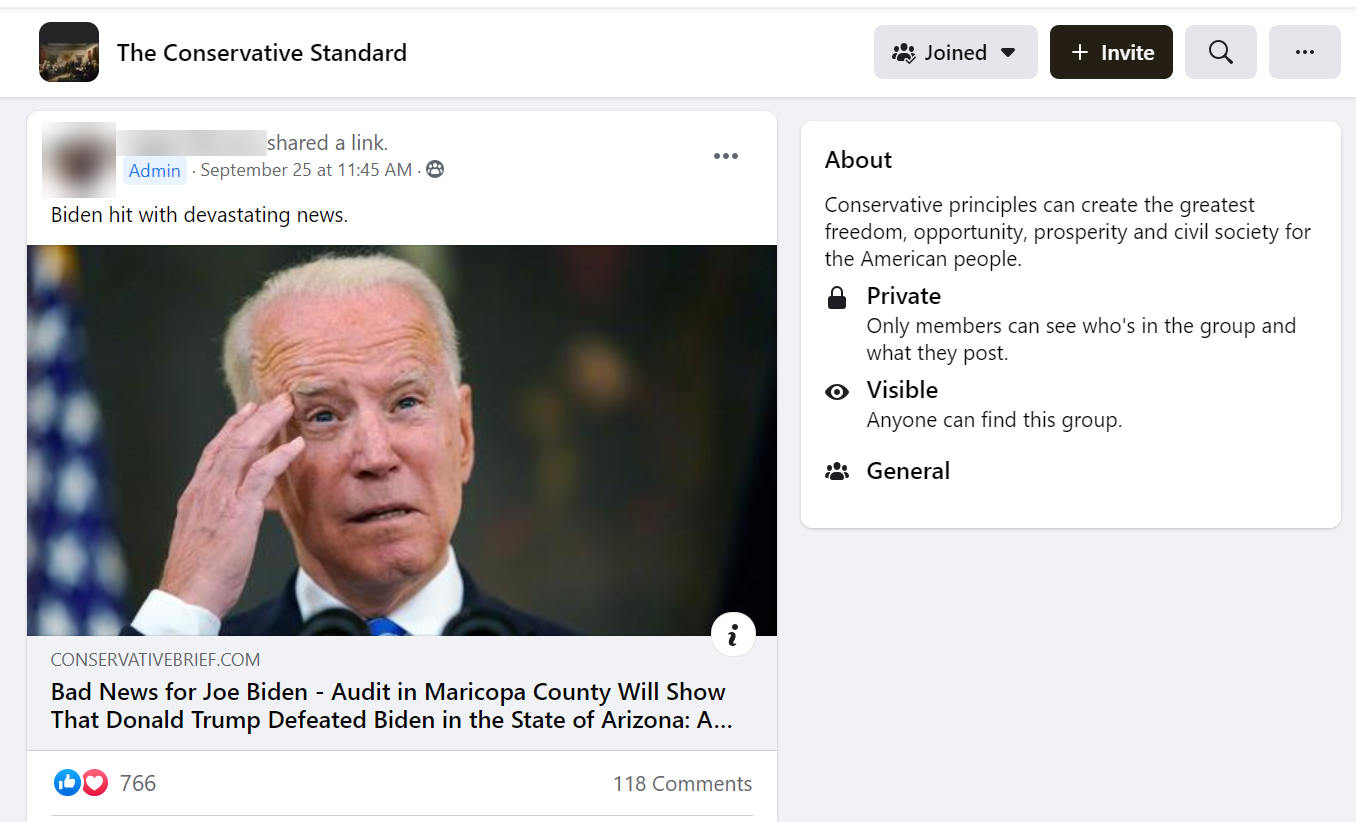 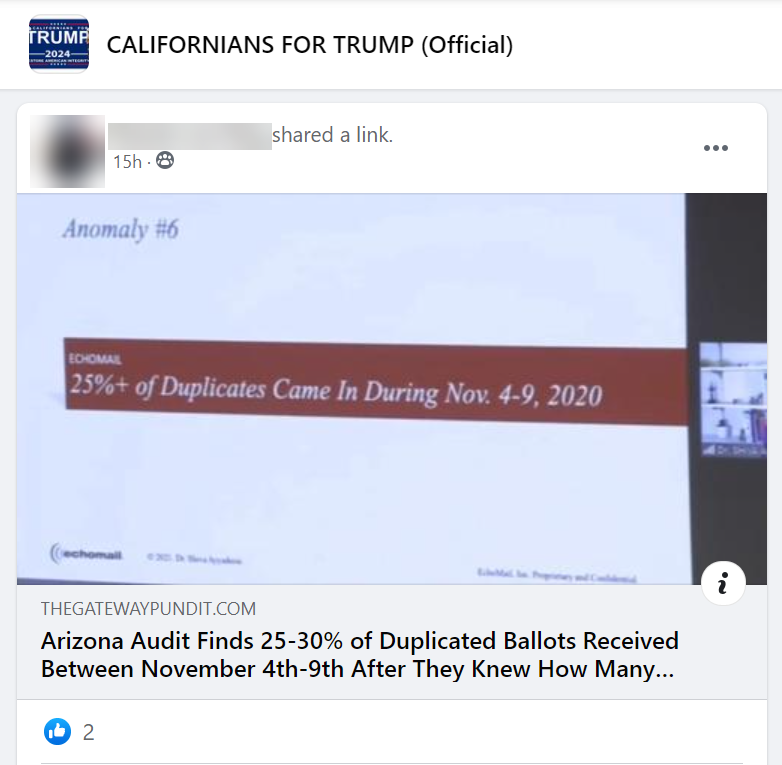 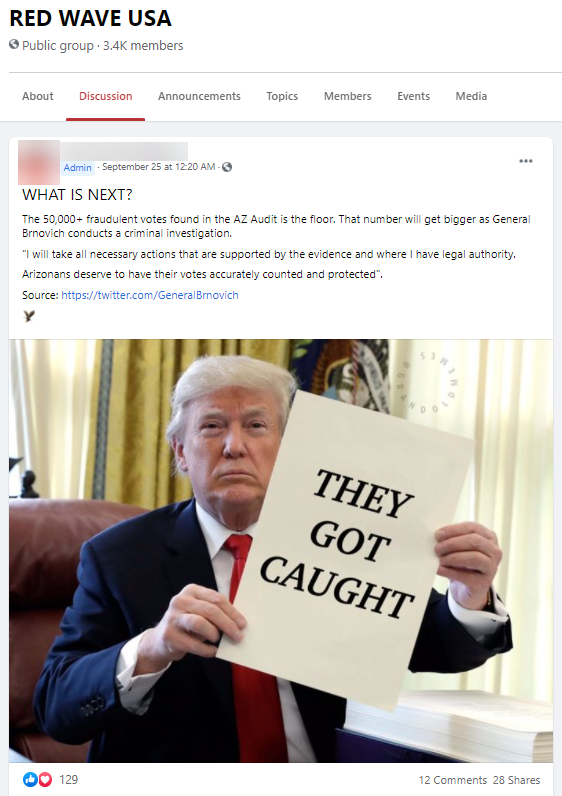 Members of Facebook groups are also sharing articles from unreliable fringe and right-wing news sites containing egregious misinformation about the “audit” results, including outdated claims that have been repeatedly debunked. 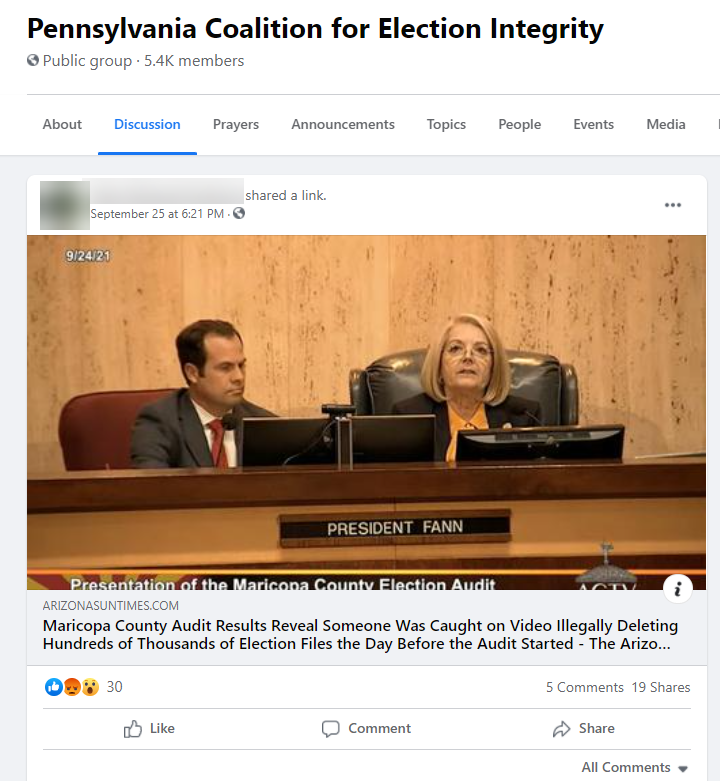 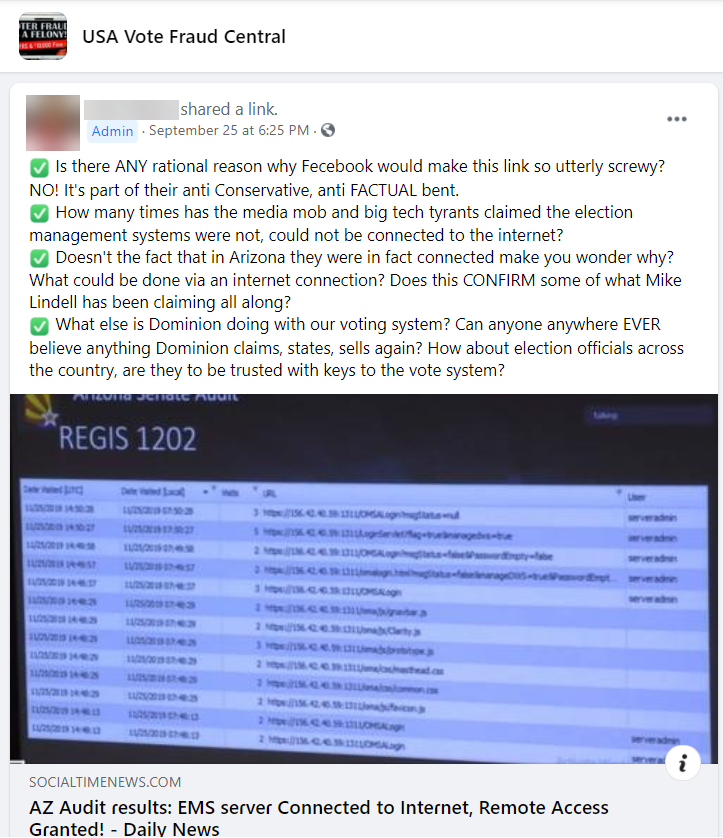 Without monitoring by Facebook, users in groups discussing the Arizona “audit,” egged on by various politicians such as GOP state Sen. Wendy Rogers, are calling for the decertification of the election or more sham “audits” for other states. Depending on how successful the push for illegitimate audits is in other states, election misinformation could continue to spread at concerning levels. 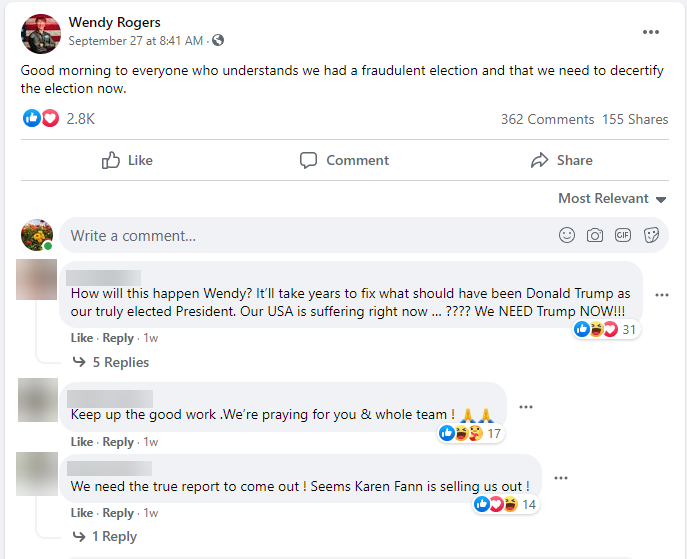 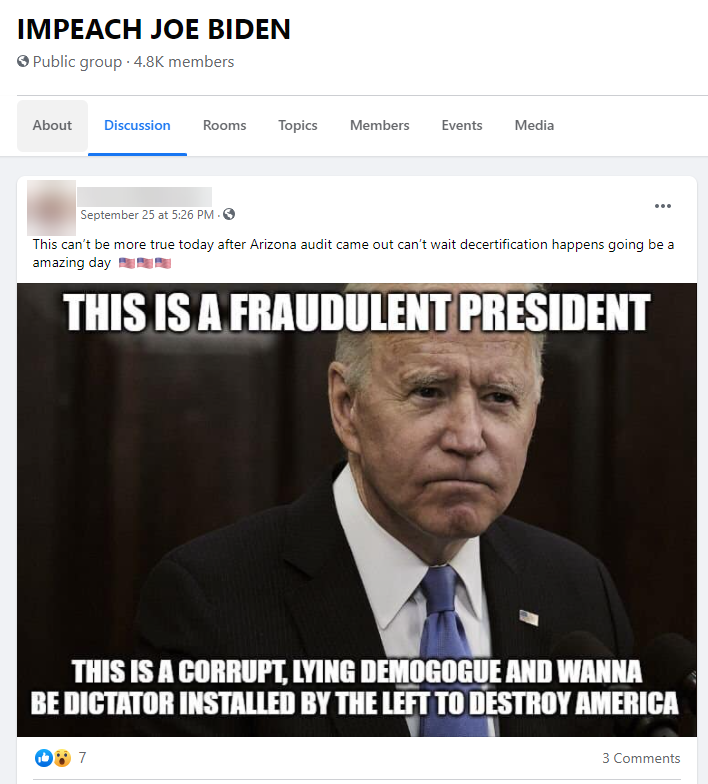 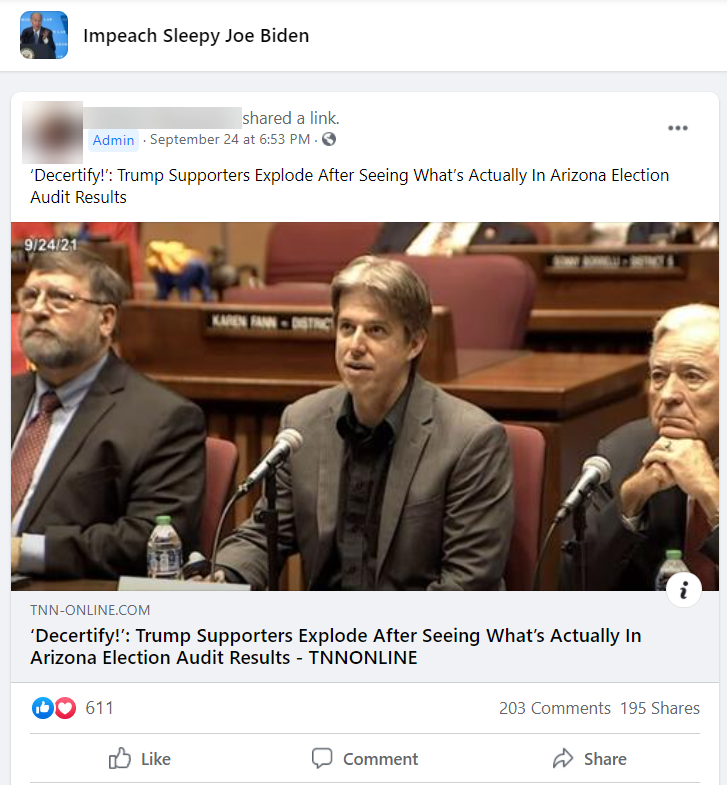 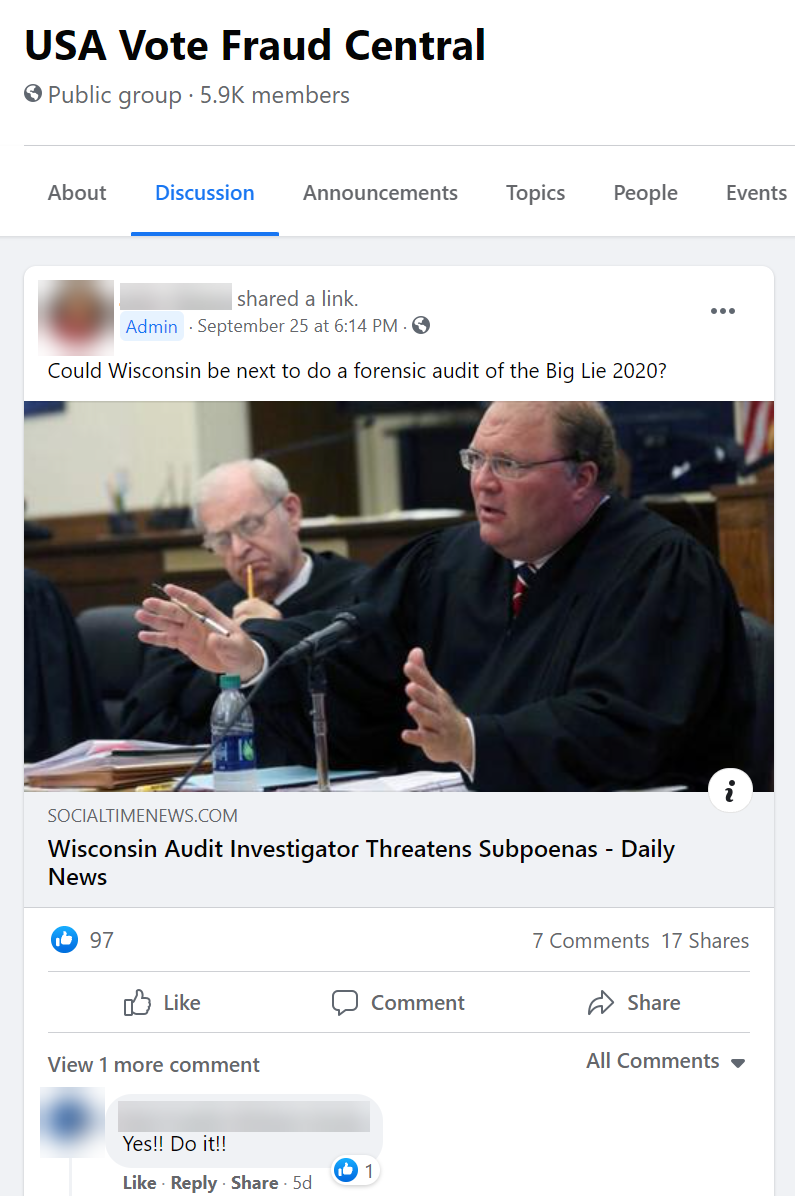 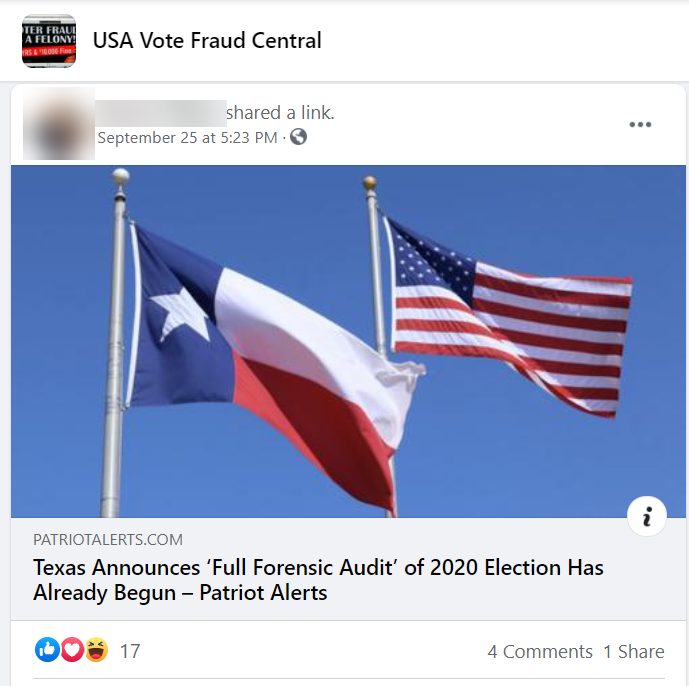 Facebook’s failure to follow its own policy and label posts with false claims about the sham Arizona “audit” shows once again that the company has chosen profits over addressing harmful election misinformation on its platform.