Update (9/30/21): Facebook is continuing to allow groups and posts promoting the use of ivermectin as a treatment against COVID-19, despite all the reporting on the devastating effects of the misuse of the medication and the misinformation surrounding it. Of the 60 Facebook groups we previously identified, there are 37 still active (with one no longer related to ivermectin) and growing in membership. Media Matters also identified three additional groups, including both a new group that was created on September 16 and another group that has pivoted from promoting hydroxychloroquine to promoting both that medication and ivermectin. These 39 active and ivermectin-focused groups have over 68,000 total members, and they continue to share dosing recommendations and suggestions on where to purchase ivermectin.

Update (9/1/21): Since we published our report, Facebook has taken minimal action against these groups; a few appear to be removed, one was supposedly disabled for a few hours, and another was taken down for at least two days before Facebook restored it. Of the 47 groups identified in this article, 41 are still active on the platform, and we have identified 13 additional groups -- the majority of which were created in the last four days. These 54 active groups have nearly 75,000 total members, with roughly 12,000 of these members joining in the last week.

Facebook is allowing groups on its platform to promote the use and sale of ivermectin -- a drug typically prescribed to fight parasites in humans and large animals -- to prevent and treat COVID-19, even though the social media company claims that it removes such content as part of its policy against medical misinformation.

In the last week, the Food and Drug Administration and the Centers for Disease Control and Prevention both warned against unapproved use of ivermectin to treat or prevent COVID-19, after increased reports of patients harmed by self-medicating with ivermectin intended for horses. The drug is used to treat intestinal conditions caused by parasitic worms in both animals and people, but the large doses typically prescribed for veterinary use are dangerous for humans.

Despite these warnings -- as well as Facebook’s own policy against promoting the purchase, sale, or other misinformation about ivermectin -- users on the platform are sharing ways to use ivermectin for COVID-19, with some even recommending methods for other users to acquire the drug. In fact, Media Matters has found 47 active Facebook groups with nearly 65,000 combined members centered around ivermectin and its use for COVID-19. The majority of these groups were created in 2021, and they're based around the world, including in the United States, South Africa, Malaysia, Australia, and the United Kingdom.

Facebook has taken little action against these groups, despite other reporting on violative content about ivermectin on the platform. At the time of publication, Facebook has taken down one public group, “The People's Medicine: Ivermectin; Safe Effective Economical (S E E),” that had already garnered roughly 17,000 members, and some posts promoting the use of ivermectin have been flagged with a banner warning users that “unapproved COVID-19 treatments may cause serious harm.” Upon clicking on the banner, users are redirected to Facebook’s COVID-19 Information Center, but they receive no other immediate information on the drug.

Dozens of other ivermectin-focused groups are still active and promoting violative content on Facebook. Group members frequently ask where to acquire a prescription for ivermectin and for information on dosage and drug combinations, and other members point them to fringe outlets such as America’s Frontline Doctors or veterinarian supply stores.

In one private group -- IVERMECTIN MD TEAM -- over 27,000 members have access to this harmful misinformation. Facebook has often struggled to properly enforce its policies against COVID-19 misinformation, particularly within private Facebook groups, which can be more difficult for the platform to moderate. 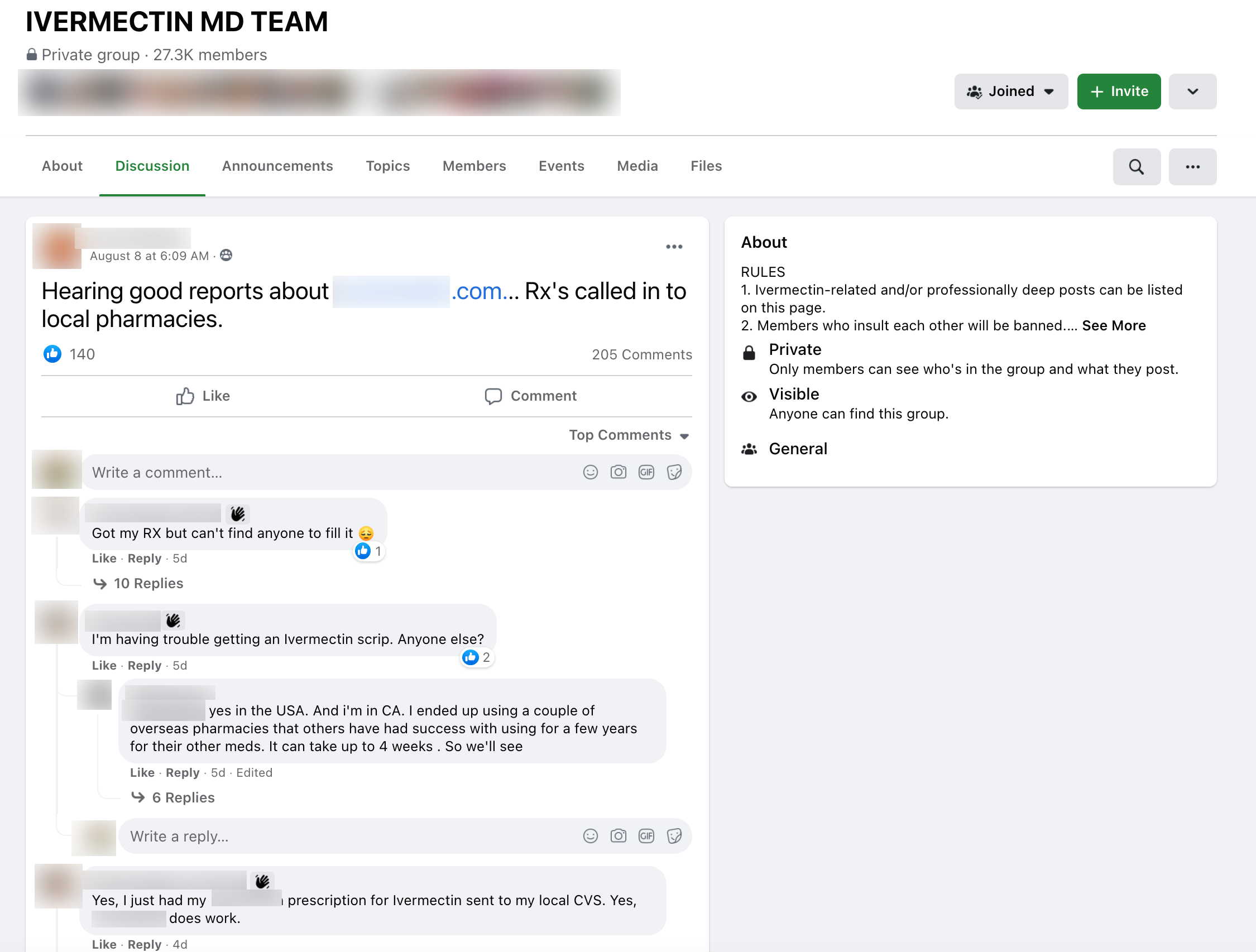 Other pro-ivermectin Facebook groups are spreading similar misinformation on the platform. 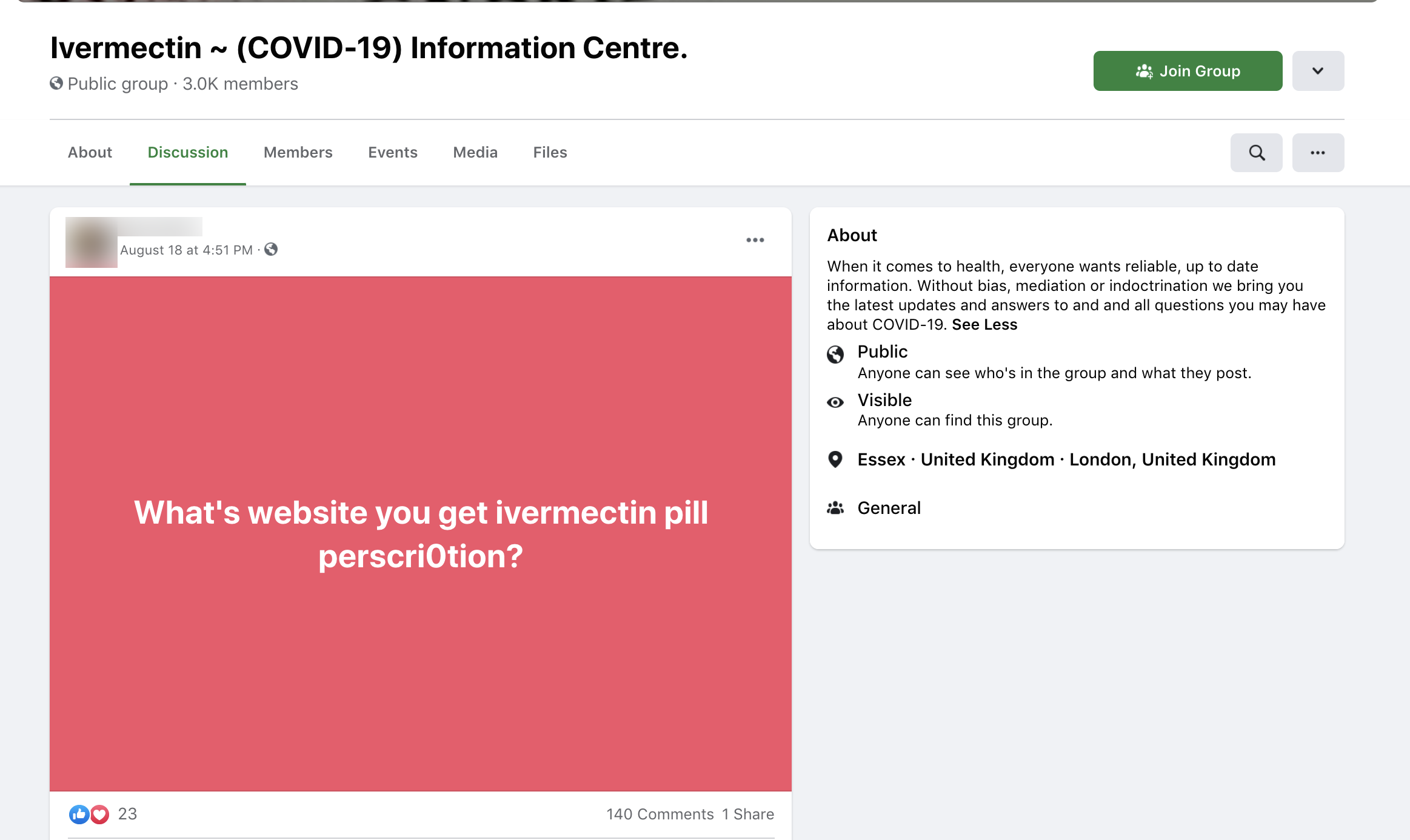 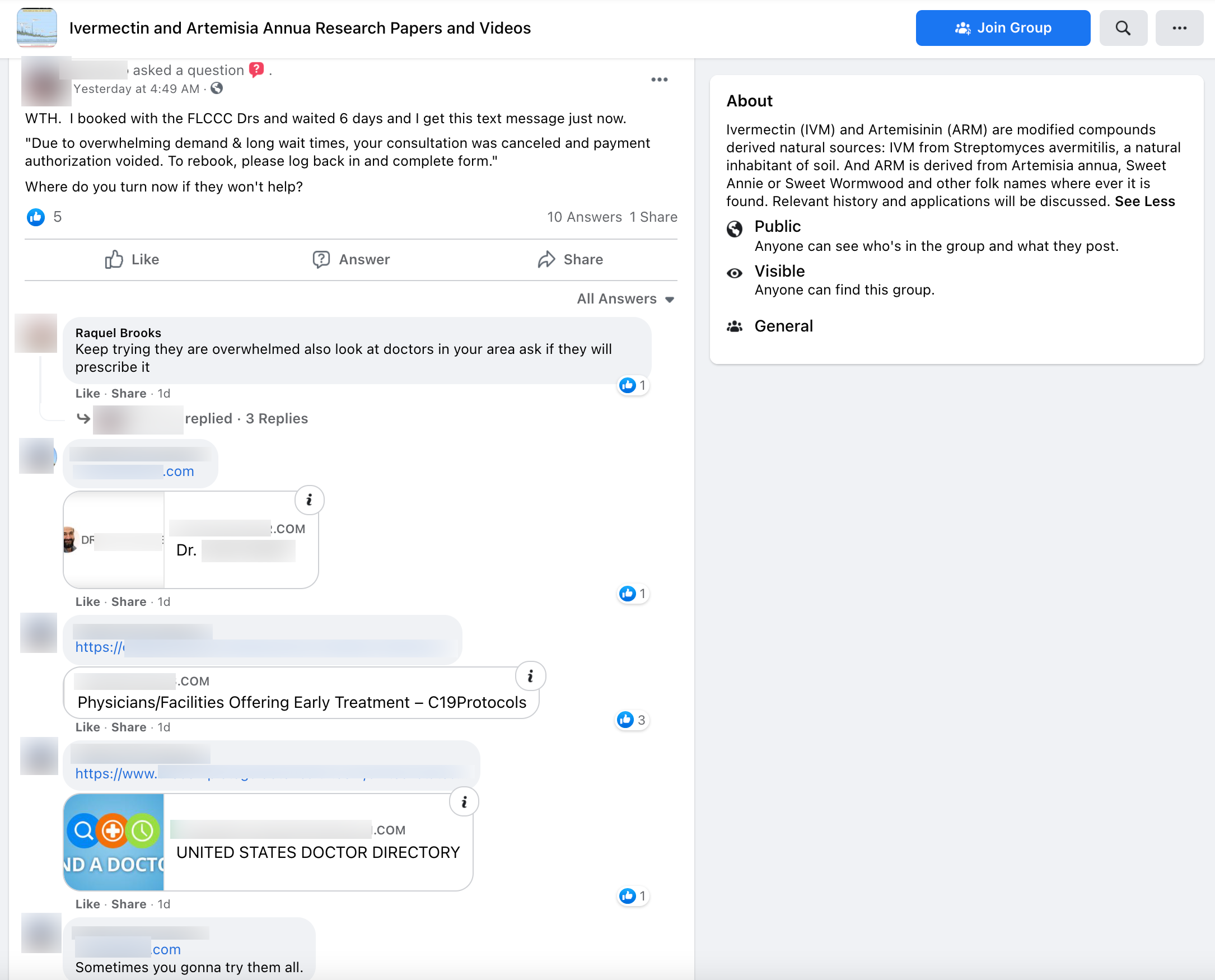 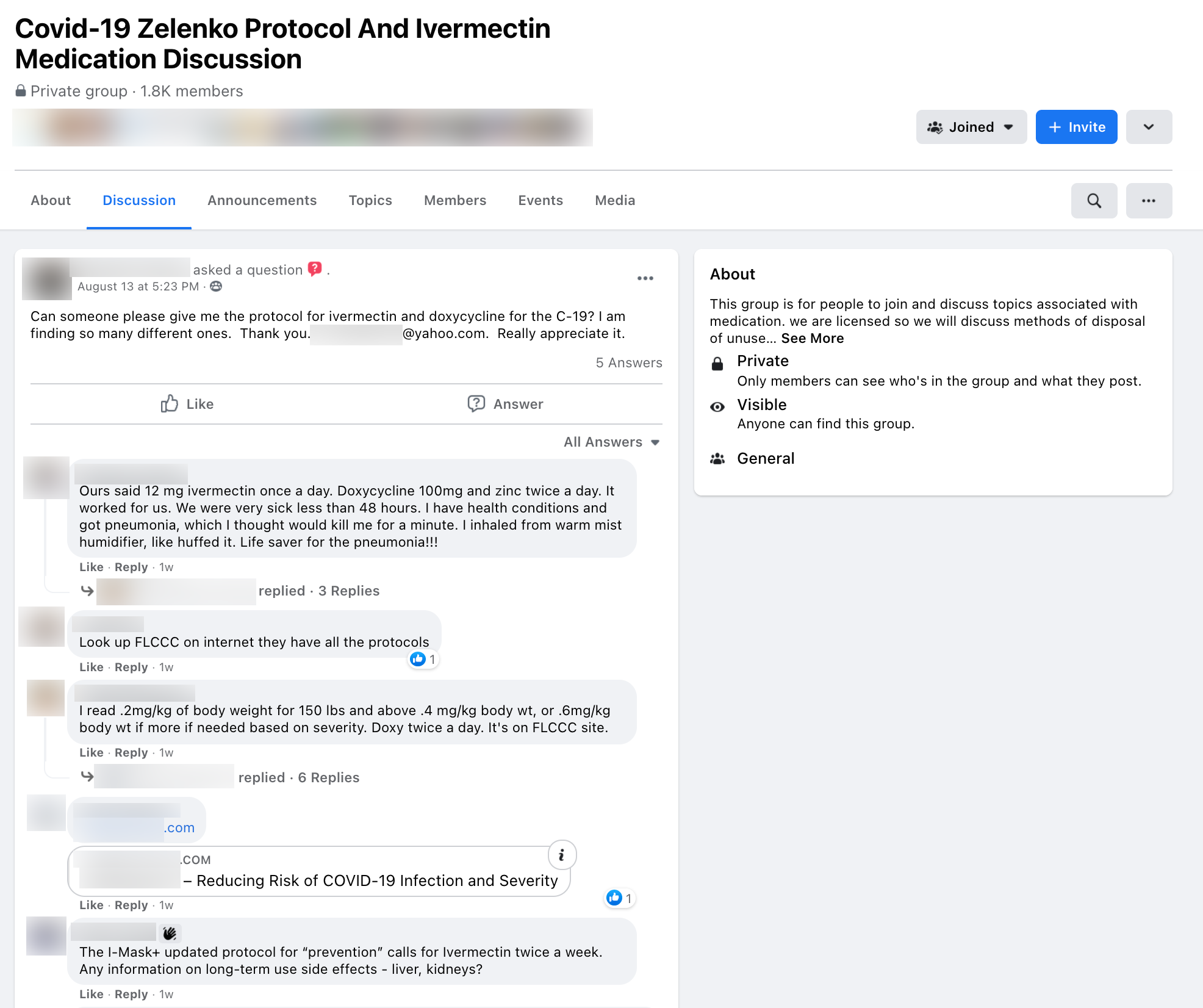 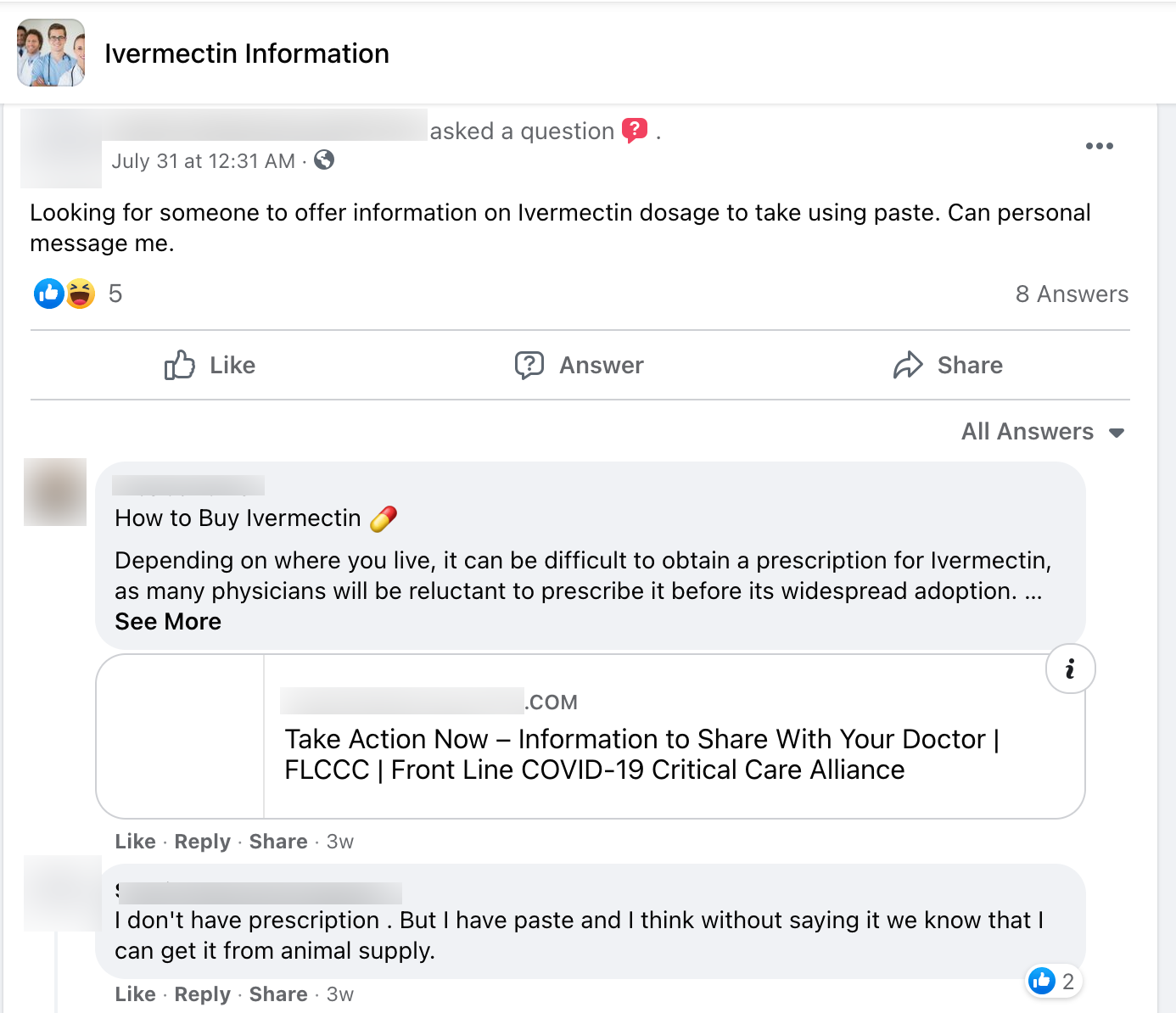 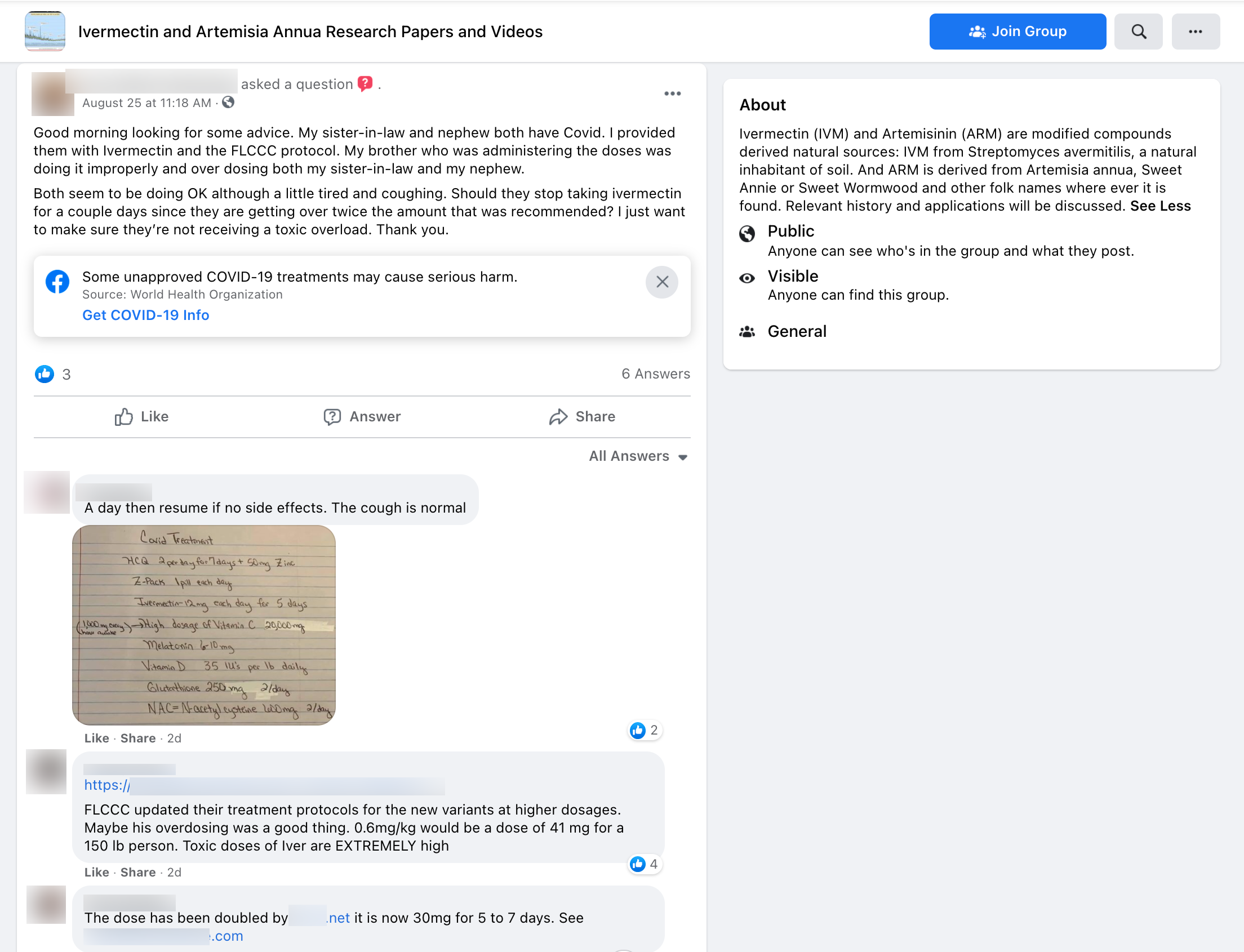 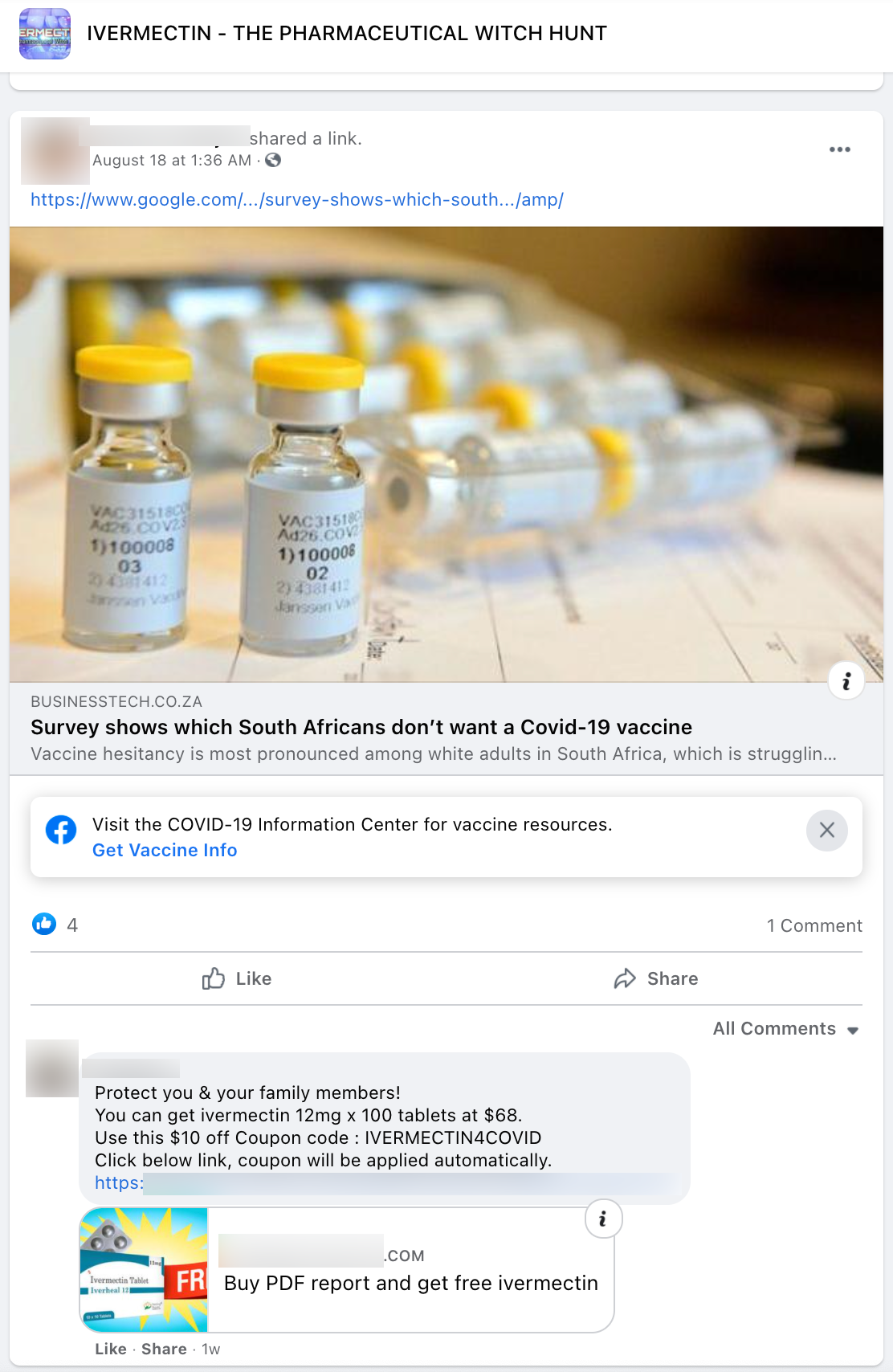 In addition to ivermectin-specific groups, other anti-vaccination and pro-Trump private Facebook groups are also exchanging information on where to buy the drug, how to dose it, and sharing testimonials. 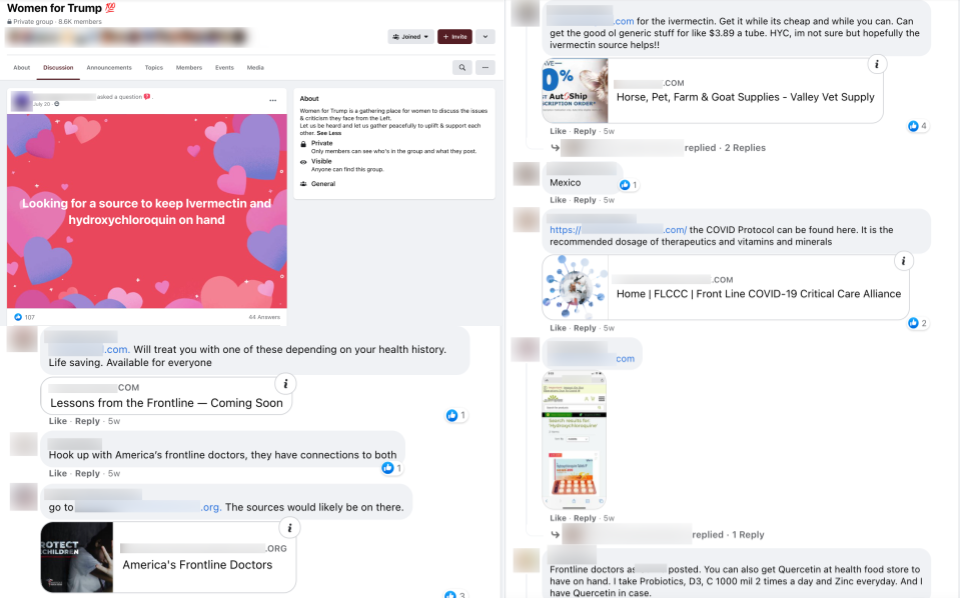 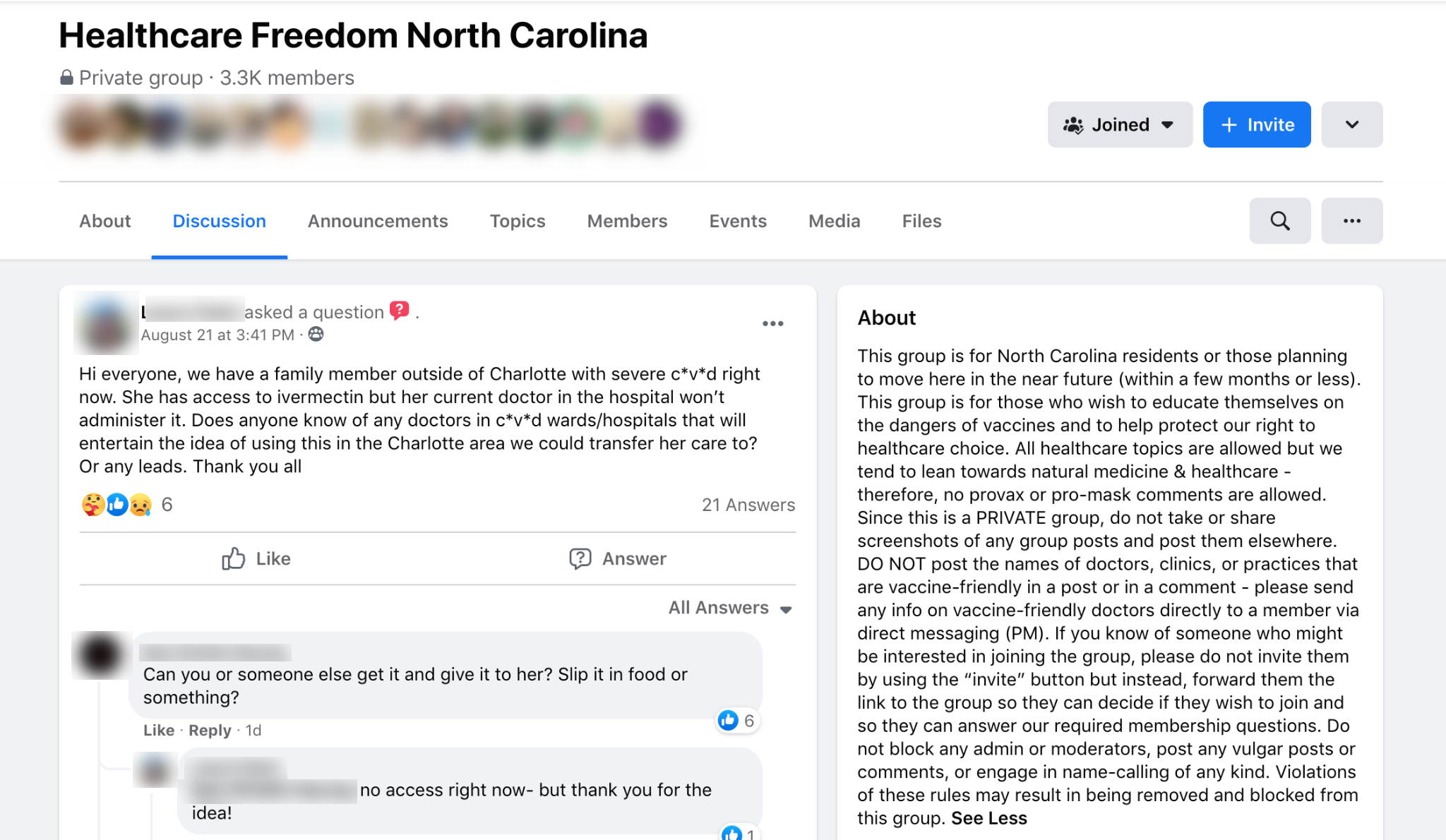 The unchecked promotion of yet another unproven treatment for COVID-19 more than a year after the disease first emerged -- particularly given the effectiveness of vaccines developed specifically to fight it -- highlights Facebook’s continued failure to protect its users from dangerous medical misinformation in the midst of a deadly pandemic.