Update (last updated 1/31/23): This piece has been updated with additional examples of previously suspended right-wing Twitter accounts that have been reinstated under Musk.

Since acquiring Twitter, embattled CEO Elon Musk has assured civil rights leaders and advertisers that he would maintain content moderation policies and create clear processes for reinstating previously banned accounts. Less than a month into his ownership, Musk has single-handedly reinstated at least 11 right-wing accounts, including former President Donald Trump.

After Musk officially acquired Twitter on October 27, previously banned users quickly celebrated his ownership, as Musk interacted with right-wing figures responsible for spreading extremism on the platform. Right-wing extremists immediately started testing Twitter's limits, flooding it with racist and anti-LGBTQ rhetoric, while QAnon conspiracy theorists also started rejoining the platform. (QAnon-supporting accounts were suspended from Twitter in July 2020 due to the real-world harms associated with the conspiracy theory.)

A day after acquiring Twitter, Musk announced that he would be forming a “content moderation council” before reinstating any previously banned accounts. 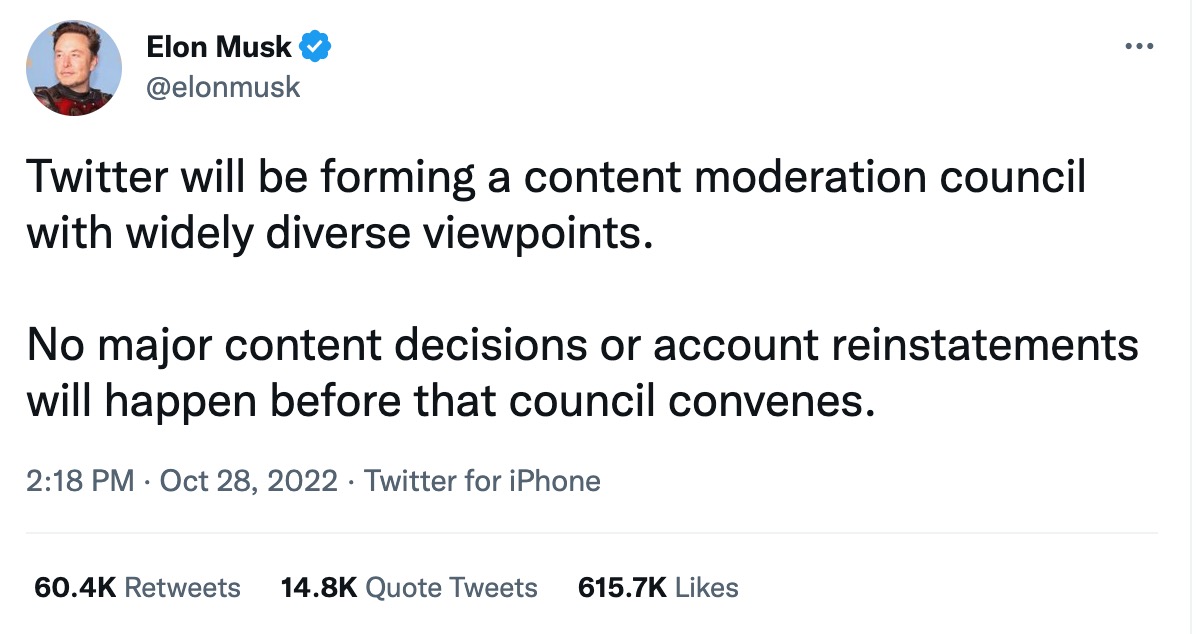 On November 2, Musk further assured civil rights leaders that there would be a clear process before allowing previously banned accounts back onto the platform. 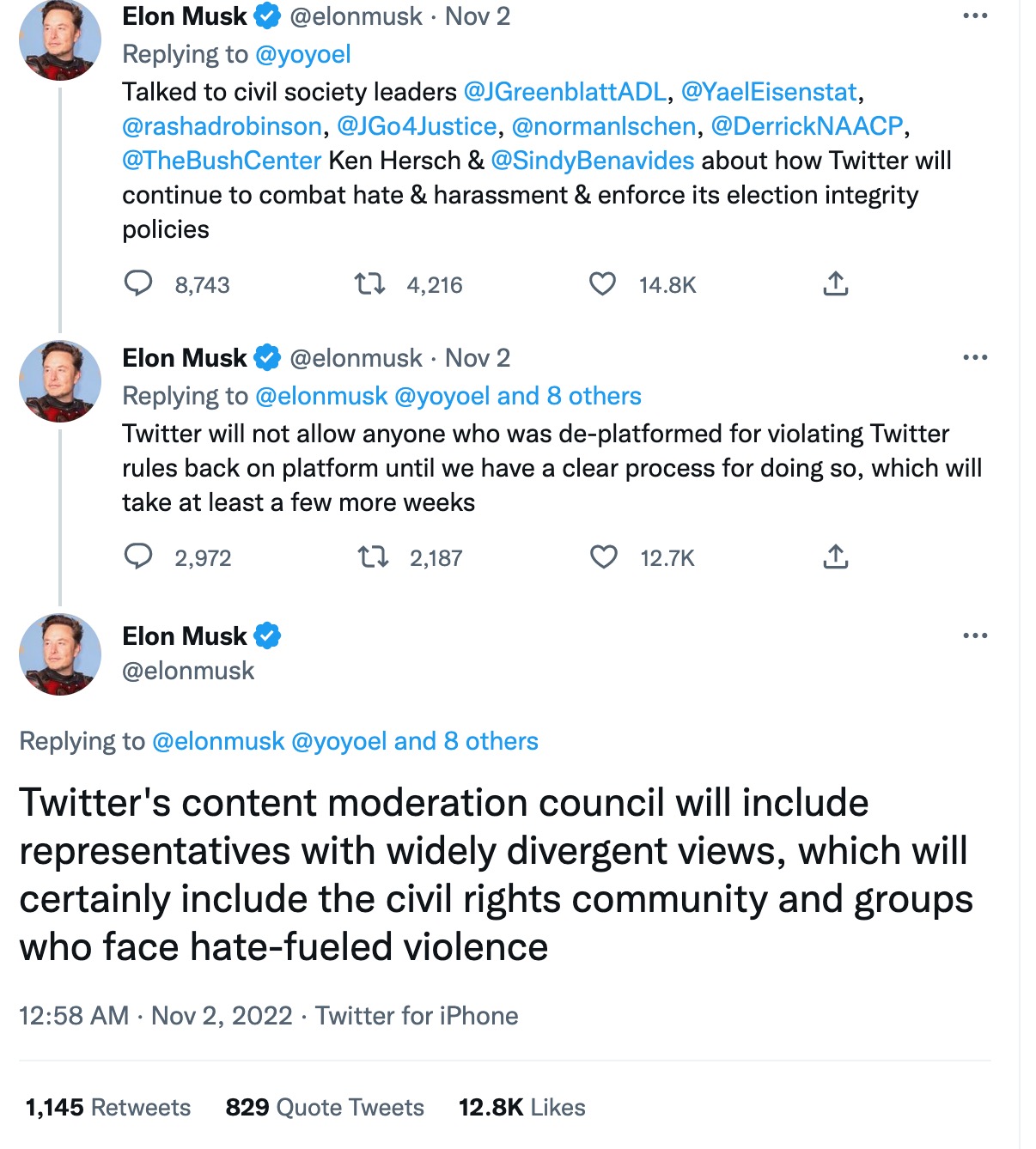 Musk has also tried to reassure Twitter advertisers — which reportedly account for 90% of the company’s revenue — that the platform would remain “warm and welcoming to all,” proclaiming, “Twitter aspires to be the most respected advertising platform in the world.” (Media Matters has previously reported that the 20 companies that spent the most on Twitter advertising since January 1 paid the platform an estimated $358 million combined.) During a Twitter Spaces broadcast on November 9, Musk again addressed advertisers’ concerns about hate speech and misinformation on Twitter, claiming that the company hasn’t made any changes to its content moderation policies.

Regardless of these assurances, Musk unilaterally reinstated at least 11 high-profile right-wing accounts that were previously banned from Twitter, including Trump, seemingly taking direction from right-wing figures like Benny Johnson.

On November 18, Musk declared it was “Freedom Friday,” reinstating right-wing accounts of Jordan Peterson and the Babylon Bee and creating a poll to ask users if he should reinstate Trump. 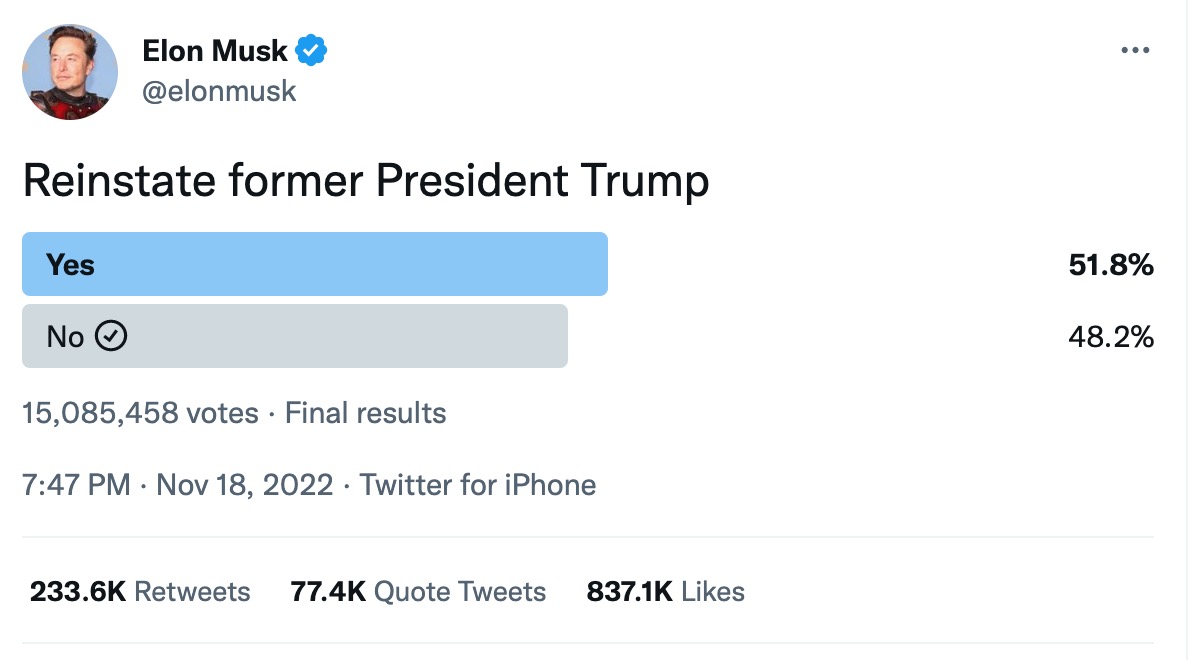 Musk reinstated Trump after his unreliable and unscientific Twitter poll ended on November 19.

Twitter permanently suspended Trump from the platform in January 2021 after he used it to incite and encourage the insurrection at the U.S. Capitol. Right-wing media have been calling on Musk to reinstate Trump since it was revealed in April that he owned a major stake in the company. Allowing Trump back on the platform ignores his previous social media behavior — in which the former president regularly pushed harmful misinformation and extreme rhetoric — and his continued promotion of election misinformation. 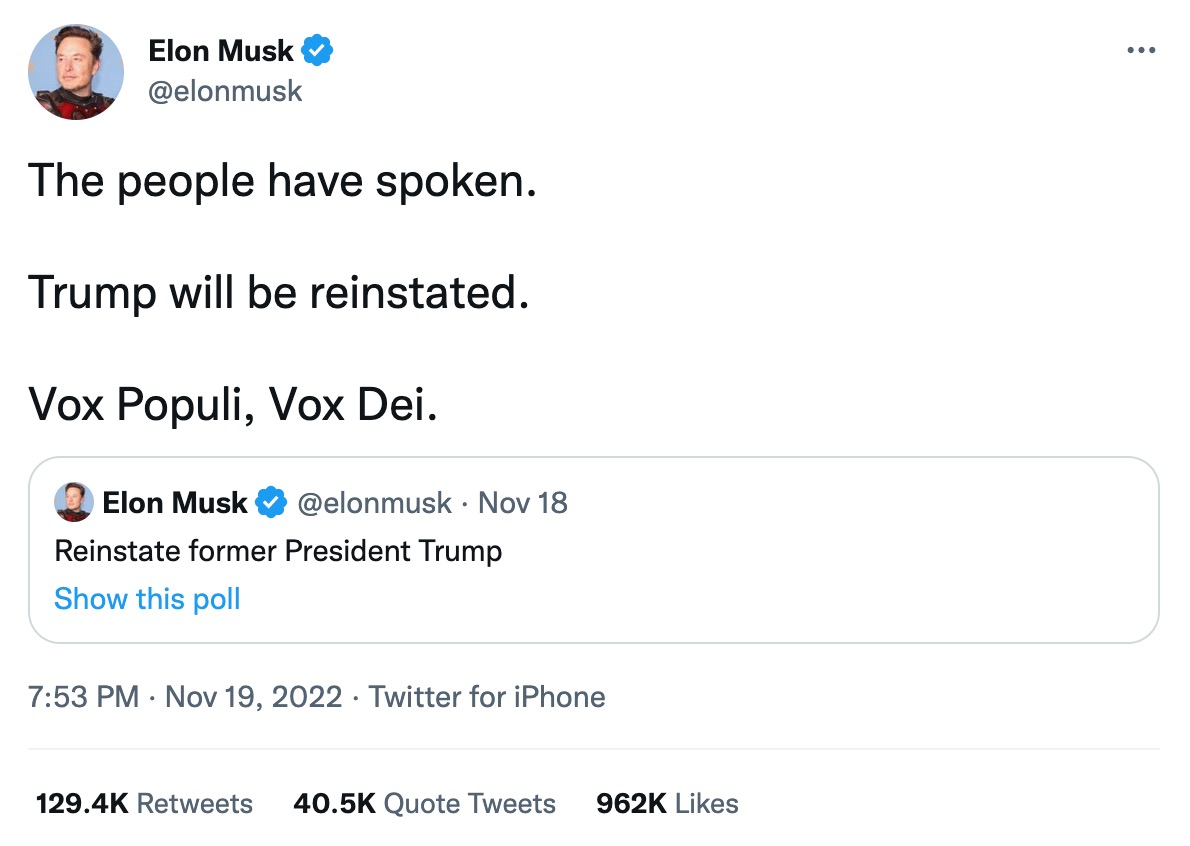 Musk has continued to reinstate other right-wing accounts since November 18, when he declared “Freedom Friday” on Twitter. Those previously suspended accounts include:

Greene’s personal account was reinstated on November 21, after it was banned in January for violating the platform’s COVID-19 misinformation policies. Greene is a known Sandy Hook and Parkland conspiracy theorist who has repeatedly pushed violent and extreme rhetoric, including the QAnon conspiracy theory. 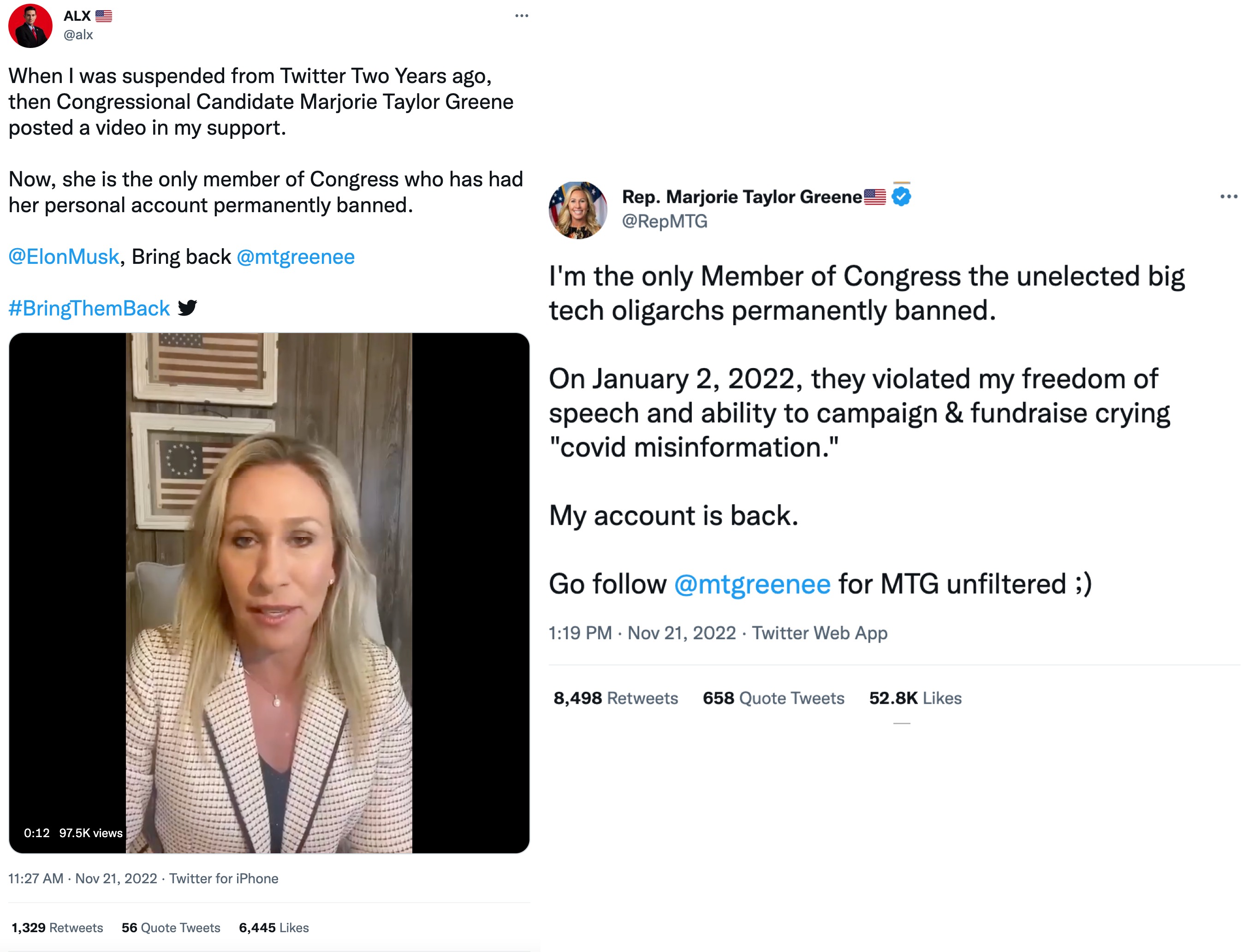 On November 20, right-wing organization Project Veritas had its account reinstated after it was permanently suspended in 2021 “for repeated violations of Twitter’s private information policy.” (Project Veritas founder James O’Keefe was also permanently suspended in 2021, but his account has not yet been reinstated.) The organization previously tried to evade its ban, using a “distribution by proxy” strategy and relying on its network of supporters, including anti-LGBTQ account “Libs of TikTok,” to spread its content. 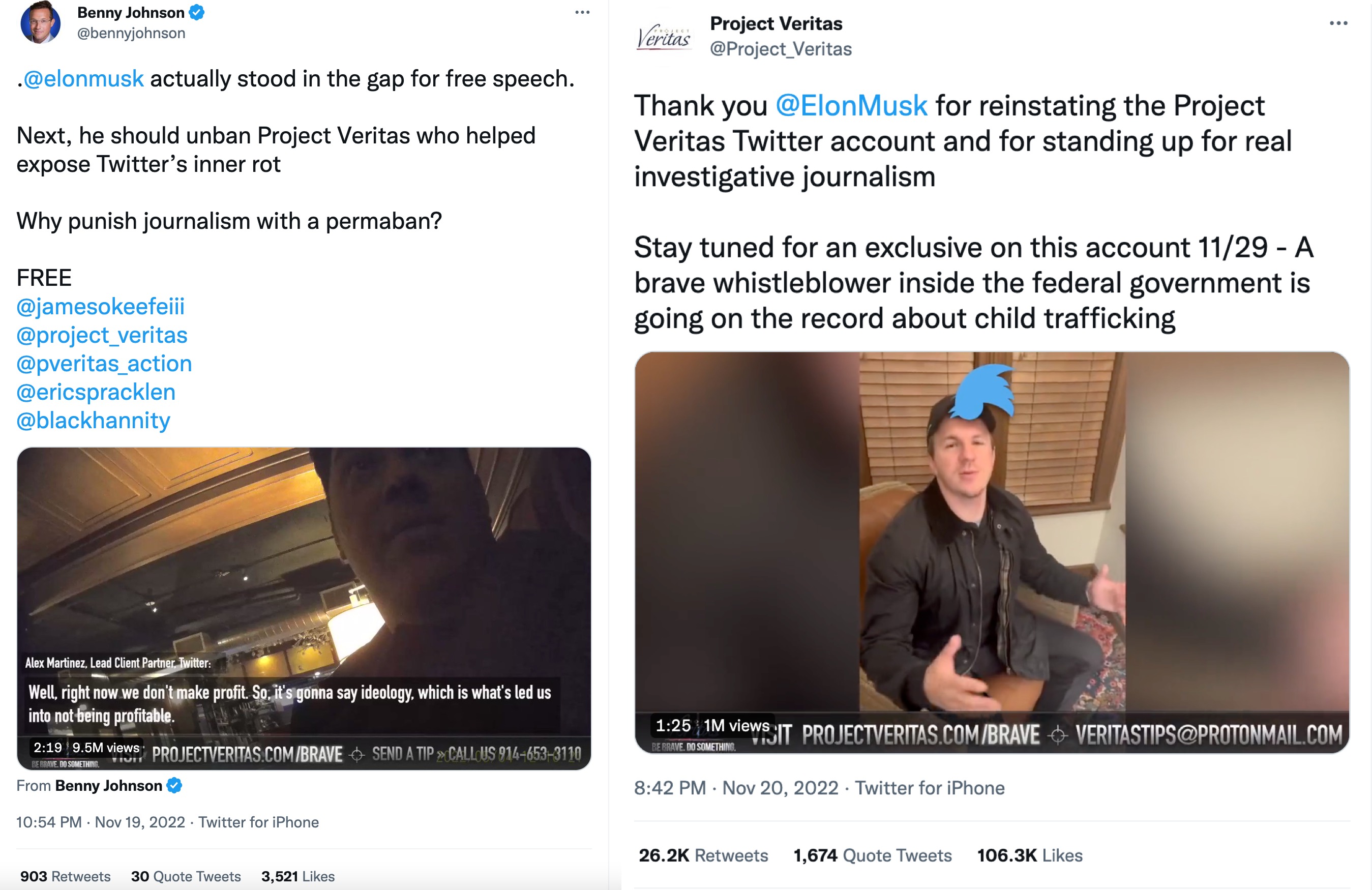 Right-wing personality Alex Lorusso (known as ALX) was permanently suspended from Twitter in 2020 for violating the platform’s “manipulation and spam policy, specifically creating accounts to replace or mimic a suspended account.” Following Trump’s reinstatement, right-wing figures called for ALX to be reinstated, which was granted on November 19.

Anti-LGBTQ figure James Lindsay was permanently banned from Twitter after repeated violations of its terms of service, including its rules against hateful conduct. Lindsay was reinstated on November 21 and has already repeatedly used the platform to perpetuate the vile right-wing hate campaign smearing trans people as “groomers.”

Misogynist Andrew Tate was banned from Twitter in 2017 after saying that rape victims “bear some responsibility” for putting themselves in a position to be assaulted, and he has since been banned from Facebook, Instagram, YouTube, and TikTok. Tate was seemingly reinstated on Twitter on November 18, when he started posting again on the platform, and later called Musk “a legend.” 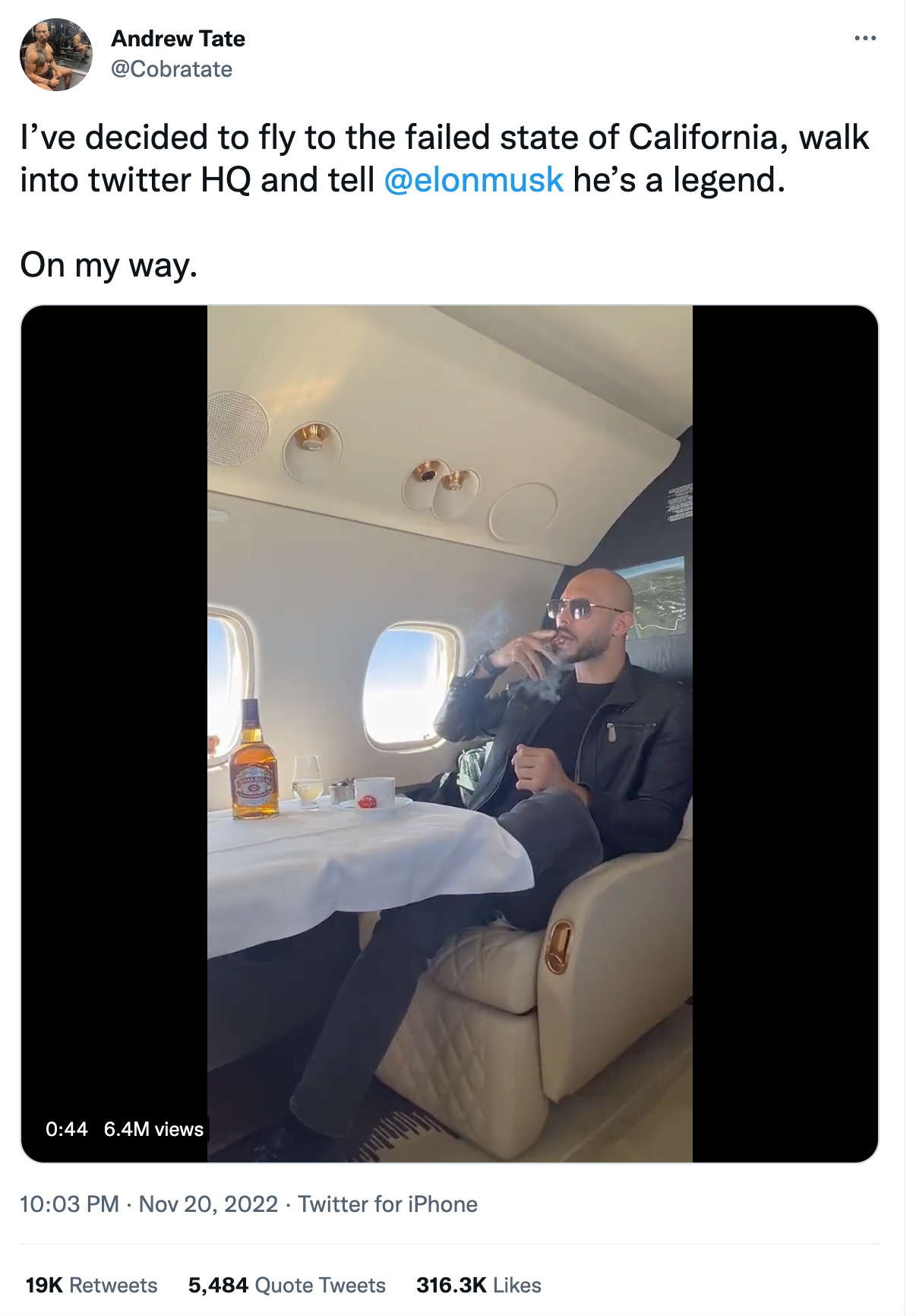 Right-wing figure Juanita Broaddrick was banned from Twitter in April after she posted COVID-19 vaccine misinformation. Broaddrick’s account was reinstated on November 21. 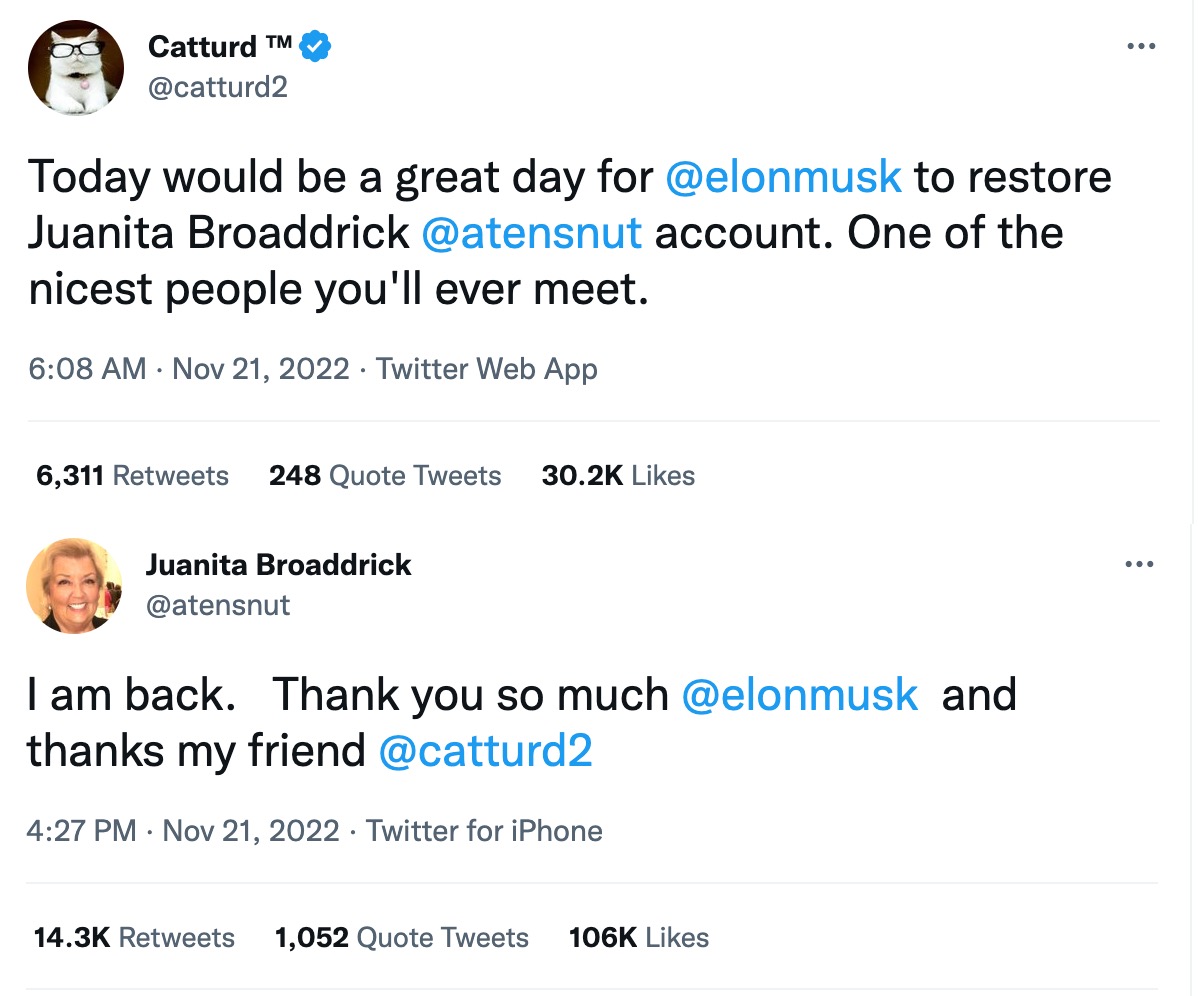 Turning Point USA contributor Savanah Hernandez was initially banned from Twitter in 2020, but she claims to have repeatedly and unsuccessfully tried to evade that ban. On November 21, her original count was reinstated. 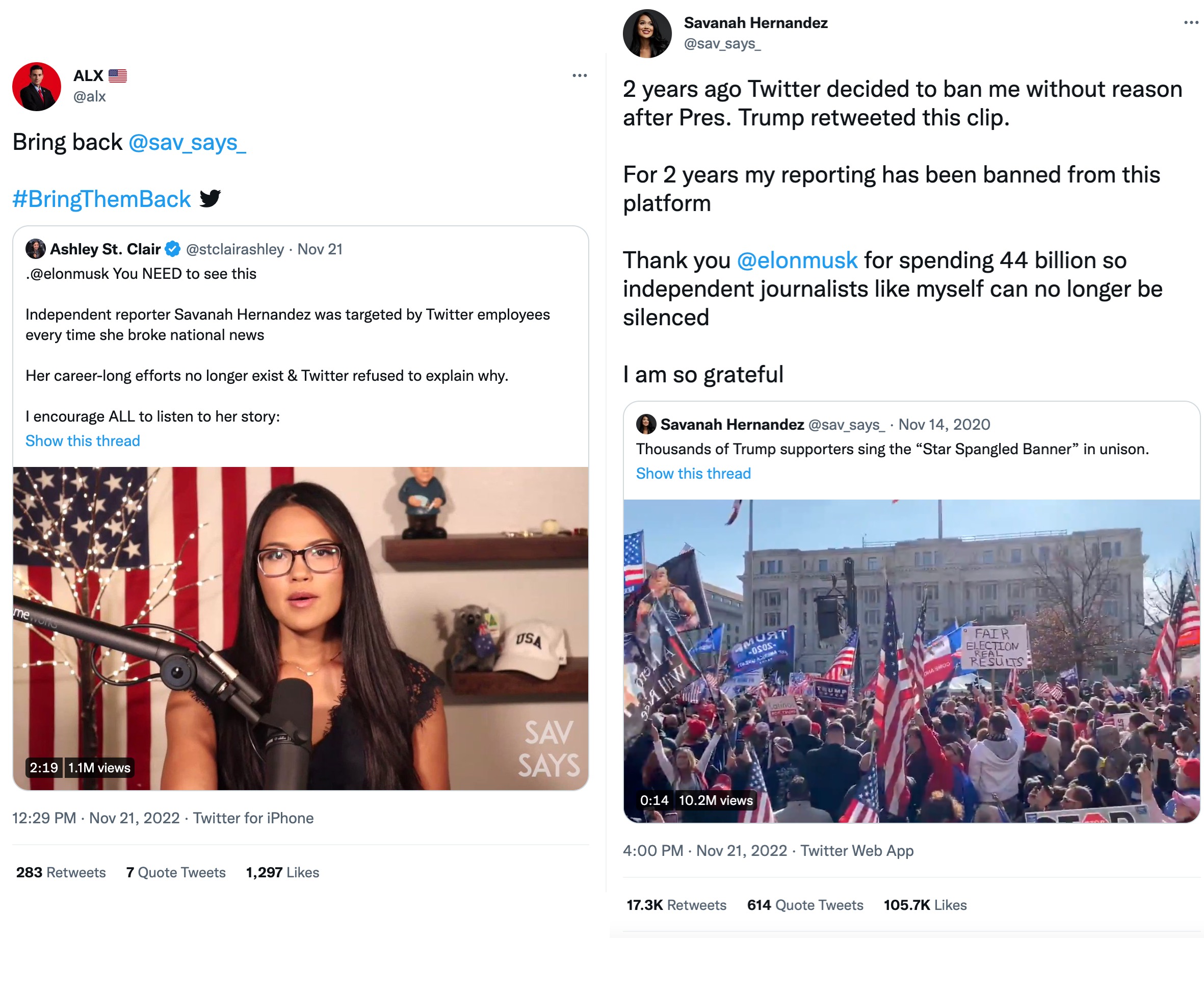 Trans-exclusionary radical feminist Meghan Murphy was banned from Twitter for intentionally misgendering and deadnaming a transgender person. Spotify’s right-wing podcaster Joe Rogan reportedly called on Musk to allow Murphy back on Twitter. Murphy’s account was reinstated on November 20 and she has already pushed anti-trans rhetoric.

Laura Loomer, a conspiracy theorist, has previously described herself as a “proud Islamophobe” who is “pro-white nationalism” and was banned from Twitter in 2018 for making anti-Muslim attacks against Rep. Ilhan Omar (D-MN). After she was reinstated on December 8, Loomer tweeted that Musk “has finally unchained me from the doors of Twitter HQ,” referencing her bizarre 2018 protest over the suspension. 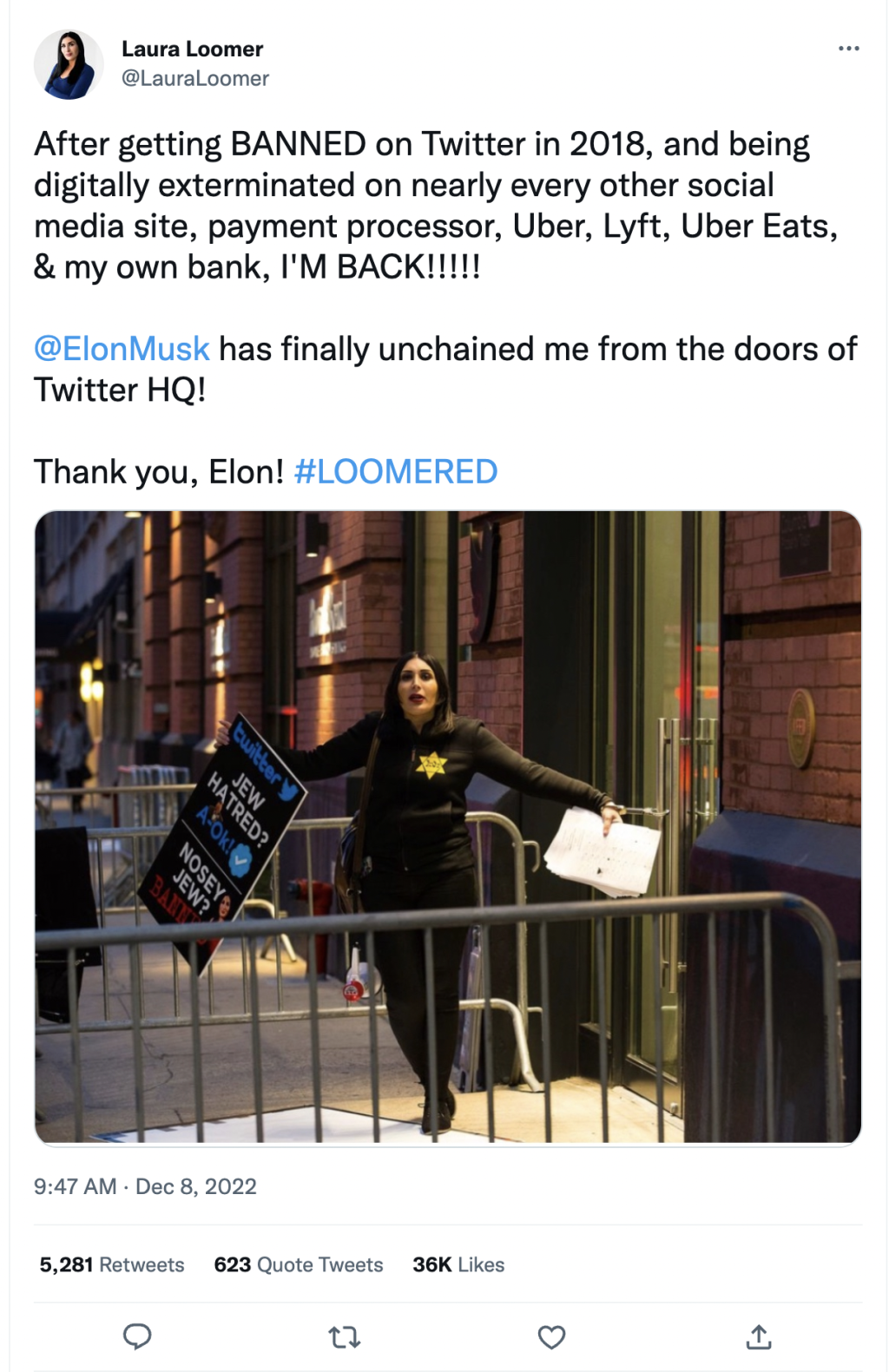 Trump ally and self-proclaimed dirty trickster Roger Stone supported Trump’s claim that the 2020 election was stolen, promoted violence ahead of the January 6 insurrection, and has spread conspiracy theories about 9/11. He was banned from Twitter in 2017 after threatening multiple CNN reporters. Stone tried to rejoin the platform in April 2022, when Musk was still in the process of buying Twitter, but was quickly suspended again. On December 7, Stone was officially reinstated and thanked Musk for his “commitment to fairness and free speech.” 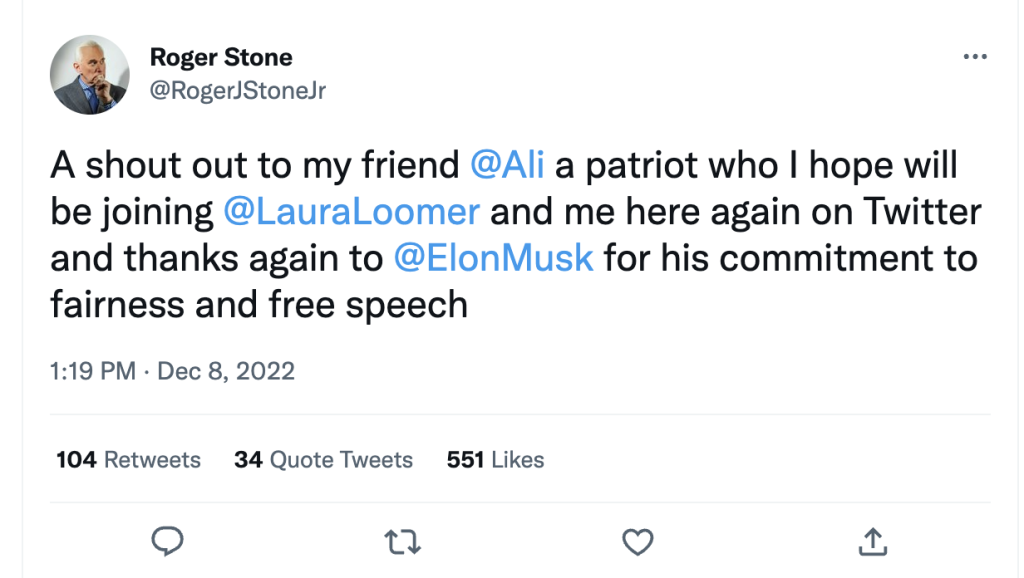 White nationalist Tim Gionet, known by his online name Baked Alaska, was suspended from Twitter in 2017 for violating the platform’s hateful conduct policy. Gionet participated in the white nationalist Unite the Right rally, and he has pleaded guilty to charges related to his involvement in the January 6 insurrection. After thanking Musk for reinstating his account on December 11, Gionet called for white supremacist Nick Fuentes and rapper Ye – who has been suspended from Twitter for antisemitism – to be allowed back on the platform.

Dr. Peter McCullough, a COVID-19 misinformer whose medical certifications are reportedly in the process of being stripped, was banned from Twitter on October 6, 2022, for violating the platform’s COVID-19 misinformation policies. Two months later on December 13, McCullough’s account was reinstated on Twitter, which is no longer moderating COVID-19 misinformation under Musk’s leadership. Upon reinstatement, McCullough promised over 678,000 followers that he would “let the world hear the medical truth ... on the pandemic and more!” He was also quick to undermine vaccines and attack Dr. Anthony Fauci, and he promoted his accounts on other social media platforms where he continued to push medical misinformation throughout his brief Twitter ban.