Update (5/22): This piece was updated with additional information.

Stefan Molyneux is a virulent misogynist and white supremacist with a penchant for spewing extremist talking points on YouTube and Twitter, but he has become a prominent influencer on the right thanks to the amplification he receives from certain right-wing figures and outlets.

Last night that amplification came from Donald Trump Jr., who quoted a transphobic tweet from Molyneux to his 3.5-plus million followers. 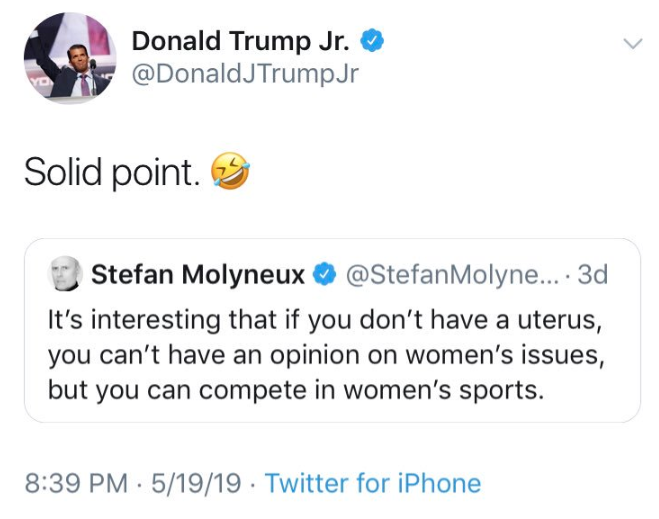 Molyneux has amassed significant influence on Twitter (over 404,000 followers) and YouTube (close to a million subscribers) thanks in part to the amplification of right-wing media figures with huge followings, which suggests that his views have become more the rule than the exception on the right. Some journalists have also pointed out the way prominent conservatives seem to ignore Molyneux's record of extremism when amplifying his tweets:

Molyneux is a white supremacist

Molyneux often promotes scientific racism. On Twitter, Molyneux has repeatedly pushed statements that link IQ, race, and crime, a basic tenet of scientific racism. An episode of his YouTube show titled “Why Liberals are Wrong About Inequality” centered on discussing IQ differences between races, which earned him the accolades of neo-Nazi outlet The Daily Stormer.

Molyneux was one of the most prominent promoters of false claims about “white genocide” in South Africa. On his YouTube channel, Molyneux has devoted several episodes to fearmongering about white “genocide” in South Africa, even hosting far-right troll Lauren Southern and appearing with Simon Roche, a South African agitator with ties to American white nationalist Jared Taylor.

After a visit to Poland, Molyneux talked fondly about “white nationalism.” As reported by Angry White Men, a blog that tracks right-wing extremists, Molyneux “told viewers he was becoming much more sympathetic to white nationalism” after visiting Poland. On his YouTube channel, he recorded a video in which he waxed poetic about the country’s being “99% white” composition and relative lack of crime, and said that while he had previously “spoken out against white nationalism,” he “can’t argue with the reality.”

Molyneux uses YouTube to promote white supremacist talking points and fearmonger about “population replacement.” The blog Angry White Men has documented Molyneux’s use of YouTube to push white supremacist talking points and racist rhetoric, including framing immigration as “population replacement,” claiming that diversity “means fewer white people,” and advocating for having “people of the same race and culture in a country” in the name of “social cohesion.” On YouTube, he also promoted white nationalist Richard Spencer’s views by calling for people to “listen to his goddamn arguments.”

Molyneux is a virulent misogynist 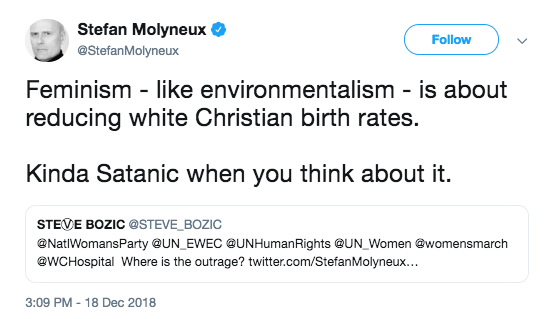 Molyneux is a men’s rights activist. His YouTube content regularly features complaints about the supposed oppression of men in society, and he strongly championed James Damore, the Google employee who was fired after writing a memo contending that women’s underrepresentation in the technology field is due to biology.

Molyneux is also an amplifier of idiotic conspiracy theories

Molyneux once fearmongered that a new film in the Star Wars franchise was about the failure of diversity. As reported by Right Wing Watch, Molyneux devoted one of his YouTube videos to lashing out against Star Wars: The Last Jedi, claiming it was about the suffering of white men caused by increasing diversity.

On his YouTube channel, he amplified the asinine claim that Democrats were involved in “spirit cooking” rituals. In a video that can still be found on his YouTube channel, Molyneux hosted rape apologist Mike Cernovich, who claimed that John Podesta, former presidential candidate Hillary Clinton’s campaign chairman, was involved in “spirit cooking” rituals during which participants mixed “semen with breast milk” to drink.

He has claimed “globalism” is a plot to “take money from white males.”