Patreon -- a platform that provides “content creators” with tools to run membership-based subscription services and earn a monthly income -- is helping QAnon influencers monetize the dangerous conspiracy theory. And it appears the company is cashing in too, taking a 5-12% cut depending on the user’s payment plan even though the content seemingly violates the platform’s terms of use.

Media Matters has identified 14 prominent QAnon content creators on Patreon who are profiting by peddling the violent conspiracy theory.

According to Patreon’s terms of use, creators with a “known affiliation with violent or dangerous groups” or “violent hate groups” are not eligible to receive funds through the platform, “no matter the purpose or apparent intention of their Patreon page.” Additionally, “any creator praising or actively supporting these groups or their leaders won’t be allowed on Patreon.”

Patreon’s policy also encompasses calls for violence and glorification of groups “known to support ideologies that would be classified as hate speech” as grounds for removal from the platform.

Even more, the platform claims to “proactively look at some pages and posts on Patreon and review reported pages to identify potential violations of our guidelines,” which “may include looking at what is supported by funds received through Patreon.”

“We can disable your account at our discretion,” Patreon warns creators.

The QAnon conspiracy theory seemingly violates Patreon’s terms of service. It is centered around claims that President Donald Trump is secretly fighting against members of the “deep state” and “pedophiles,” who will supposedly be rounded up and executed soon. These threats and calls for violence targeting Trump’s political opponents are often wildly anti-Semitic. This unfounded conspiracy theory promoting imminent violence against the president’s enemies has been classified by the FBI as a domestic terror threat and has been directly linked to multiple killings, a kidnapping, and even terrorism.

The majority of the QAnon “creators” on Patreon identified below have already been banned from other social media platforms because of the inherent threats, repeated acts of violence, and frequent misinformation campaigns closely associated with the conspiracy theory. The Daily Dot reported on the prevalence of QAnon content on Patreon in August, but the platform has yet to make substantial changes to enforce its policies against supporters of the destructive conspiracy theory.

How Patreon profits from QAnon

Despite the blatant violence and frequent racism associated with QAnon, Patreon has yet to crack down on promoters of the conspiracy theory on its platform. In fact, the company is even profiting from it.

Patreon provides very little transparency about how much money QAnon influencers are taking in or how many “patrons” are subscribed to their platforms because creators can choose to restrict the information visible on their page. However, according to Patreon’s platform fee policy, the company takes 5%, 8%, or 12% of the creator’s monthly income depending on their payment plan, as well as varying “payment processing fees” and “payout fees.” Creators active before May 2019 are held to a flat pricing fee of 5%.

For instance, QAnon account RedPill78 was recently removed from YouTube but has 674 supporters on Patreon and reports receiving $4,065 per month. This comes to approximately $48,780 per year, of which a minimum of $2,439 goes to Patreon.

SGT Report, another QAnon creator that was recently removed from YouTube, has 1,445 patrons with a fee of $5 per month, meaning the creator is accumulating $7,225 per month and roughly $86,700 per year. Under its platform fee policy, Patreon’s annual minimum cut is $4,335.

It is impossible to provide an accurate total figure for how much money Patreon is making as a platform from the conspiracy theory because many QAnon creators have their total patron numbers or monthly incomes hidden. However, it is clear that Patreon has enabled QAnon influencers to both spread the dangerous conspiracy theory and profit while doing it. Even worse, Patreon is seemingly ignoring these creators’ clear terms-of-use violations while taking a cut of those profits from QAnon followers.

Patreon must enforce its own terms of service and remove QAnon-affiliated creators or risk being further implicated in the spread of the violent conspiracy theory. This action is long overdue. 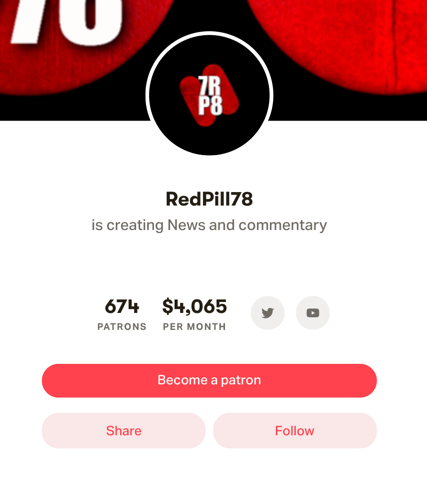 SGT Report is a prominent QAnon account that was banned from YouTube. The creator explicitly states that they are using Patreon as an “emergency back up plan” because Google and YouTube banned them. 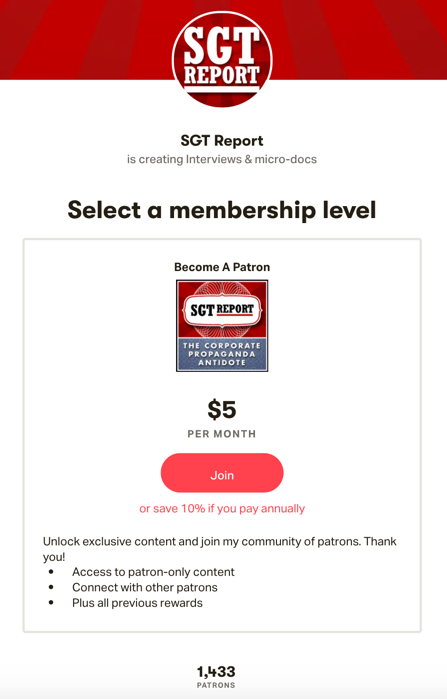 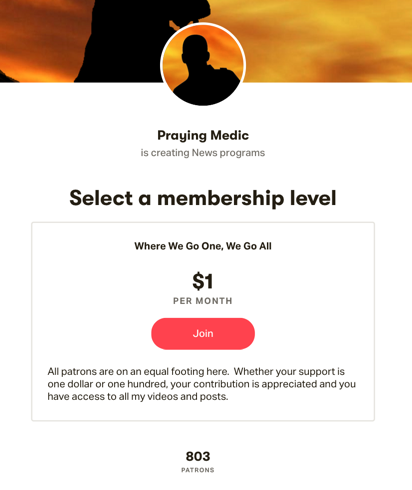 Patriots Soapbox is a major QAnon account that was also recently banned from YouTube. In their Patreon header, the creator uses the well-known QAnon acronym “WWG1WGA.” 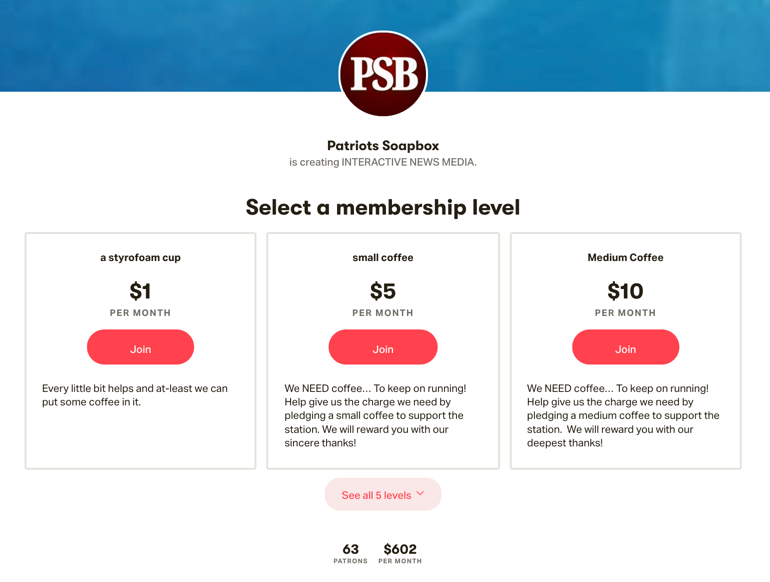 And We Know is a creator pushing the QAnon conspiracy theory on Patreon that was banned from YouTube. 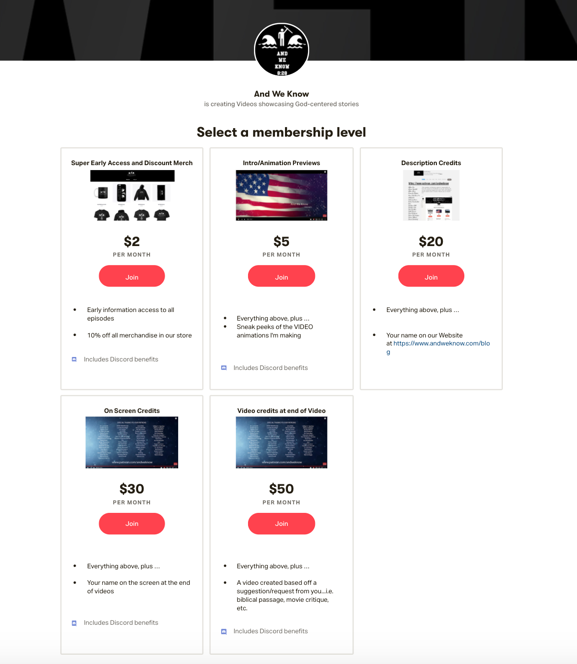 IntheMatrixxx is a prominent QAnon account that was recently banned from YouTube. On Patreon, the creator explained that their content is to be used as a “virtual tool for the #QArmy.” 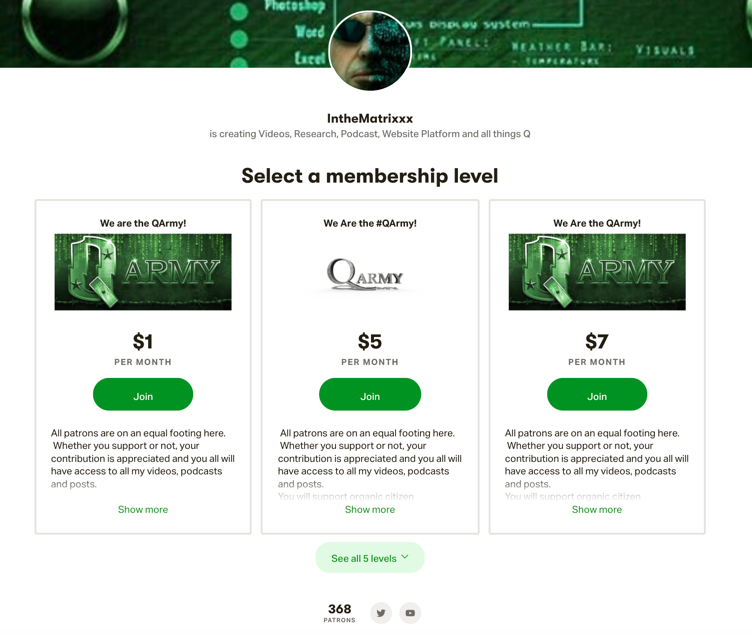 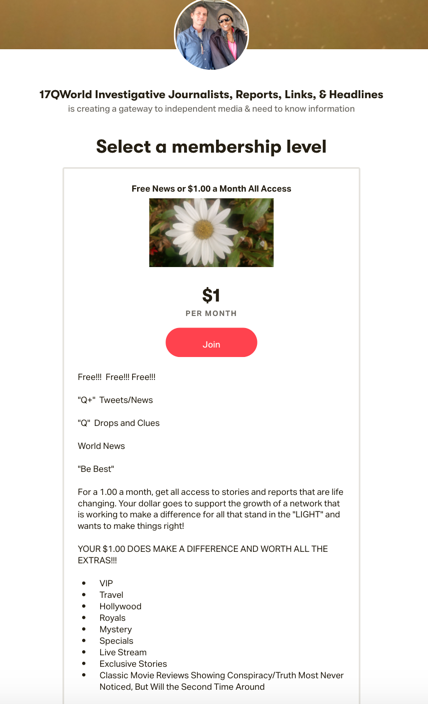 Patriot News is a prominent QAnon account that was banned from YouTube. On Patreon, the creator promotes “a Pro-Trump & Pro-Q collaborative REAL NEWS media platform” delivering “24/7 news analysis through the Q lens.” 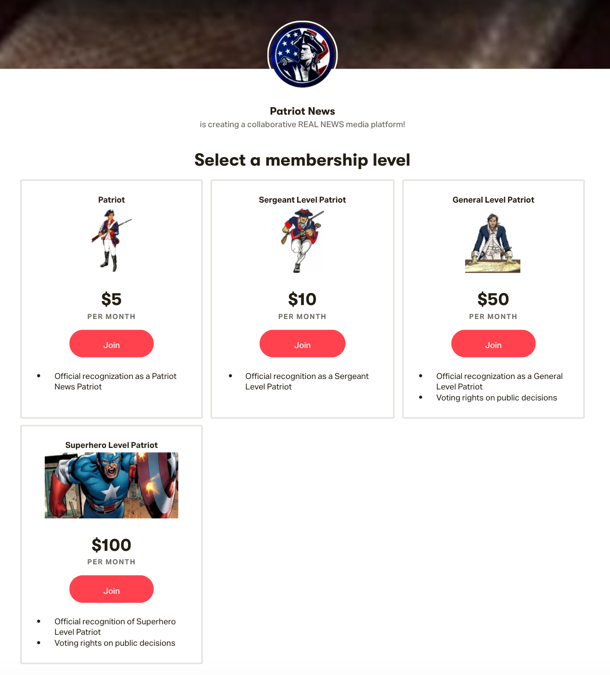 A Posteriori Flurry of Logical Faction

A Posteriori Flurry of Logical Faction is a QAnon account that was recently banned from YouTube, though the account’s backup YouTube channel is still active. The web address Patreon.com/WhereWeGo1WeGoAll -- a reference to the QAnon slogan -- redirects to the creator’s page. 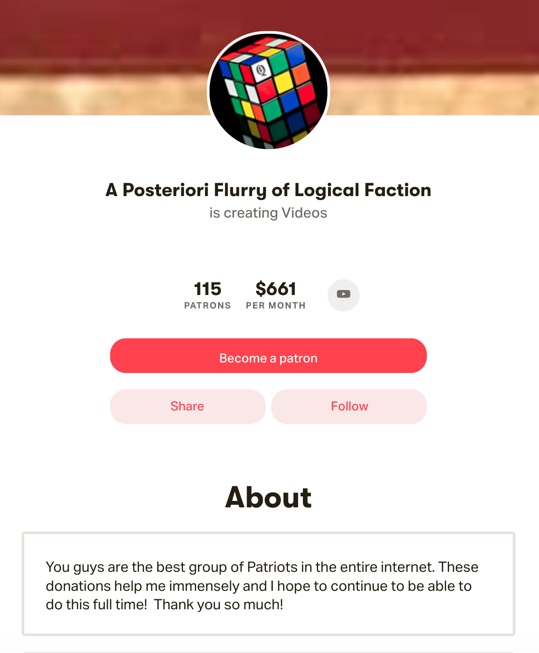 Redpill Project is a prominent QAnon news account with over 59,900 subscribers on YouTube; it has yet to be taken down despite its QAnon affiliation. On Patreon, its supporters are listed as “Q Patrons.” 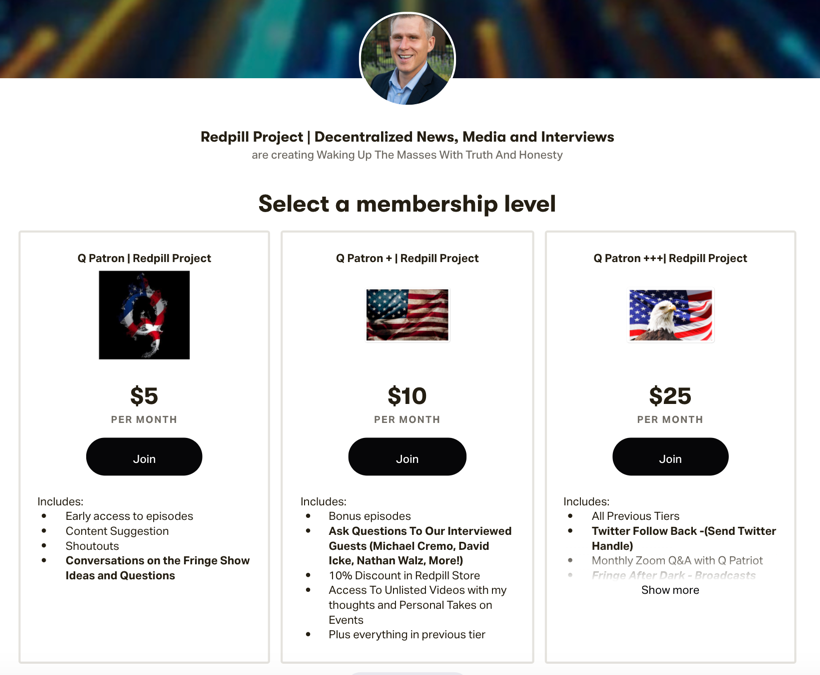 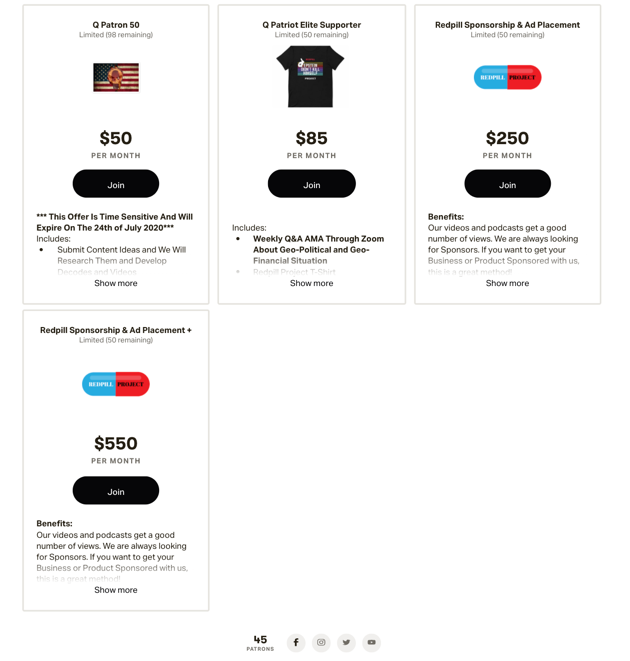 Sean Morgan is another QAnon account that was banned from YouTube. On Patreon, the creator encourages patrons to use his resources to introduce “Q and alternative Corona topics to ‘normal’ people.” 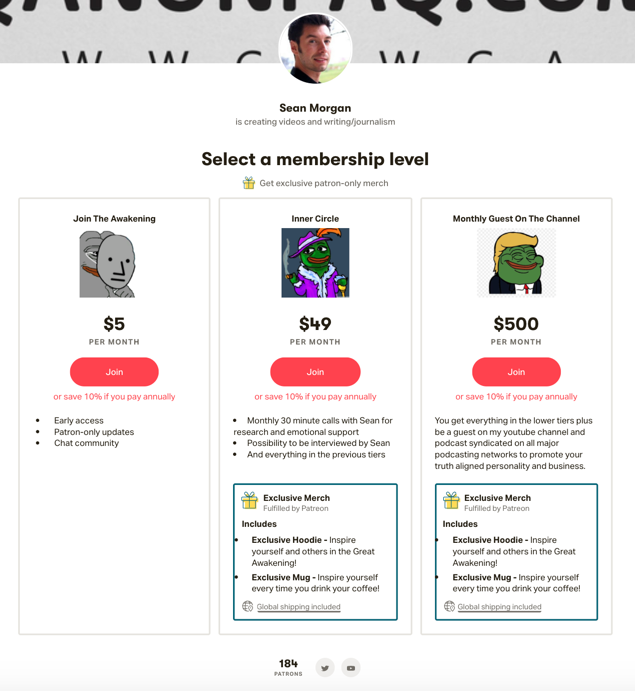 Woke Societies is a QAnon account that was recently banned from YouTube. On Patreon, it promises “to wake up the masses for the next Great Awakening,” a common reference to the conspiracy theory used by QAnon followers. 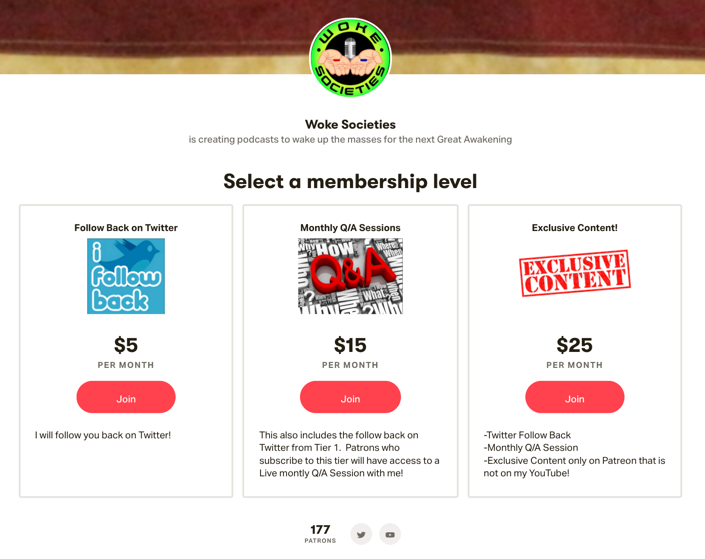 Truth and Art TV is another QAnon account that was recently banned from YouTube. On Patreon, the creator praises the conspiracy theory as “part of the Great Awakening” and uses “WWG1WGA,” an abbreviation of the QAnon slogan “Where we go one, we go all.” 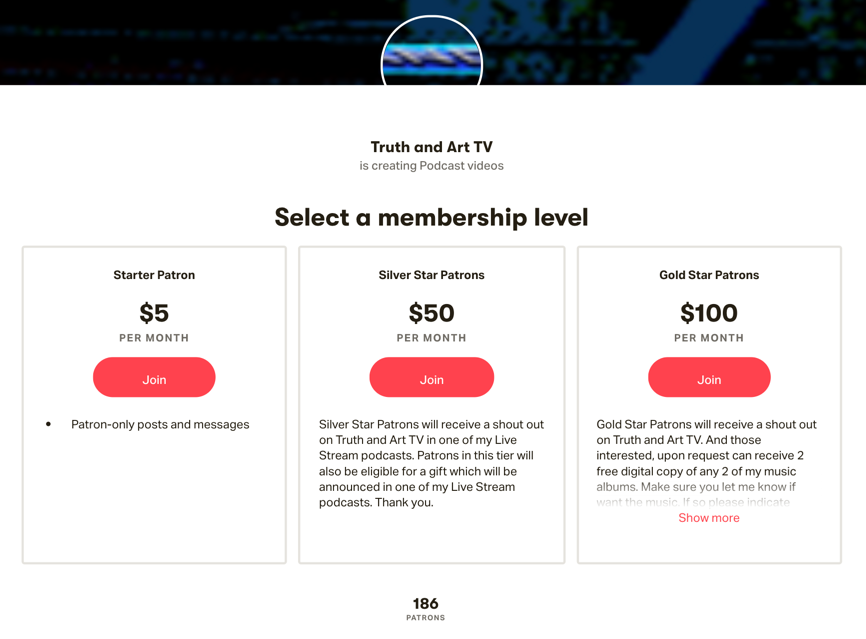 Citizens Investigative Report is a prominent QAnon account -- the introduction video includes another QAnon slogan “We are the news now.” On YouTube, the creator is now asking followers to subscribe to their Patreon alongside backup accounts on other social media platforms. 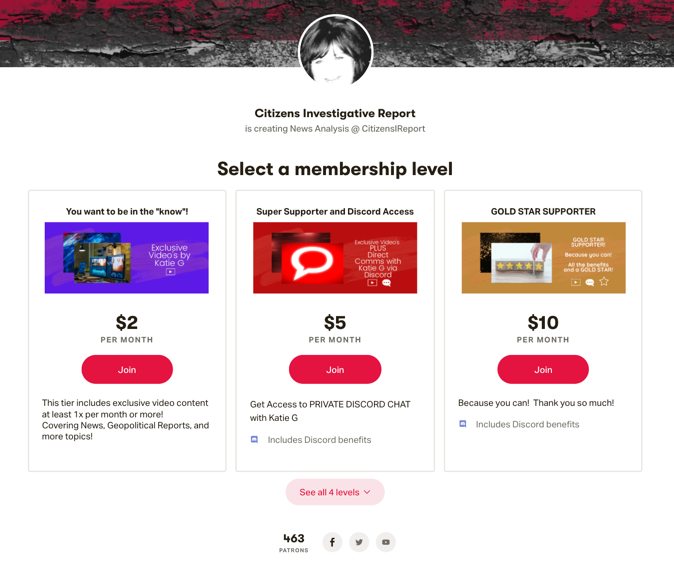