QAnon-supporting accounts were suspended from Twitter in July 2020, due to the real-world harm associated with the conspiracy theory. Elon Musk’s bid to buy Twitter in April, and subsequent acquisition of the platform in October, seemingly gave a green light to QAnon users to create new accounts and promote the dangerous conspiracy theory.

On October 27, Elon Musk officially acquired Twitter and quickly began enacting changes, such as firing top executives and dissolving the board. The acquisition was completed roughly six months after Musk made an unsolicited bid to buy the company on April 14. Right-wing media and personalities, particularly those who have been banned on Twitter, quickly praised Musk’s planned takeover.

Musk has suggested that under his leadership, Twitter would restore former President Donald Trump’s permanently suspended account on the platform, reinstate numerous additional dangerous accounts, and allow users to spread right-wing misinformation and hate speech that's currently subjected to content moderation standards. Following Musk’s official acquisition of the company, right-wing users started testing the platform’s limits, flooding it with racist and anti-LGBTQ rhetoric. In fact, use of the N-word reportedly jumped by nearly 500% in the hours after the purchase was finalized, alongside increased traffic in other racist slurs and hate speech.

In the days following Musk’s acquisition, QAnon influencers who were previously banned on Twitter started rejoining the platform. (Twitter suspended thousands of accounts dedicated to sharing content related to the QAnon conspiracy theory in July 2020 and later permanently suspended far-right QAnon-supporting figures, including Michael Flynn and Sidney Powell, after the insurrection on January 6, 2021.) QAnon influencer collective We The Media, QAnon influencers Jordan Sather and The Authority, as well as QAnon promoters Qstradamus and TheStormHasArrived17 have all returned to Twitter since October 28. (By publication, Twitter had suspended the accounts for Sather, Qstradamus, and TheStormHasArrived17.) 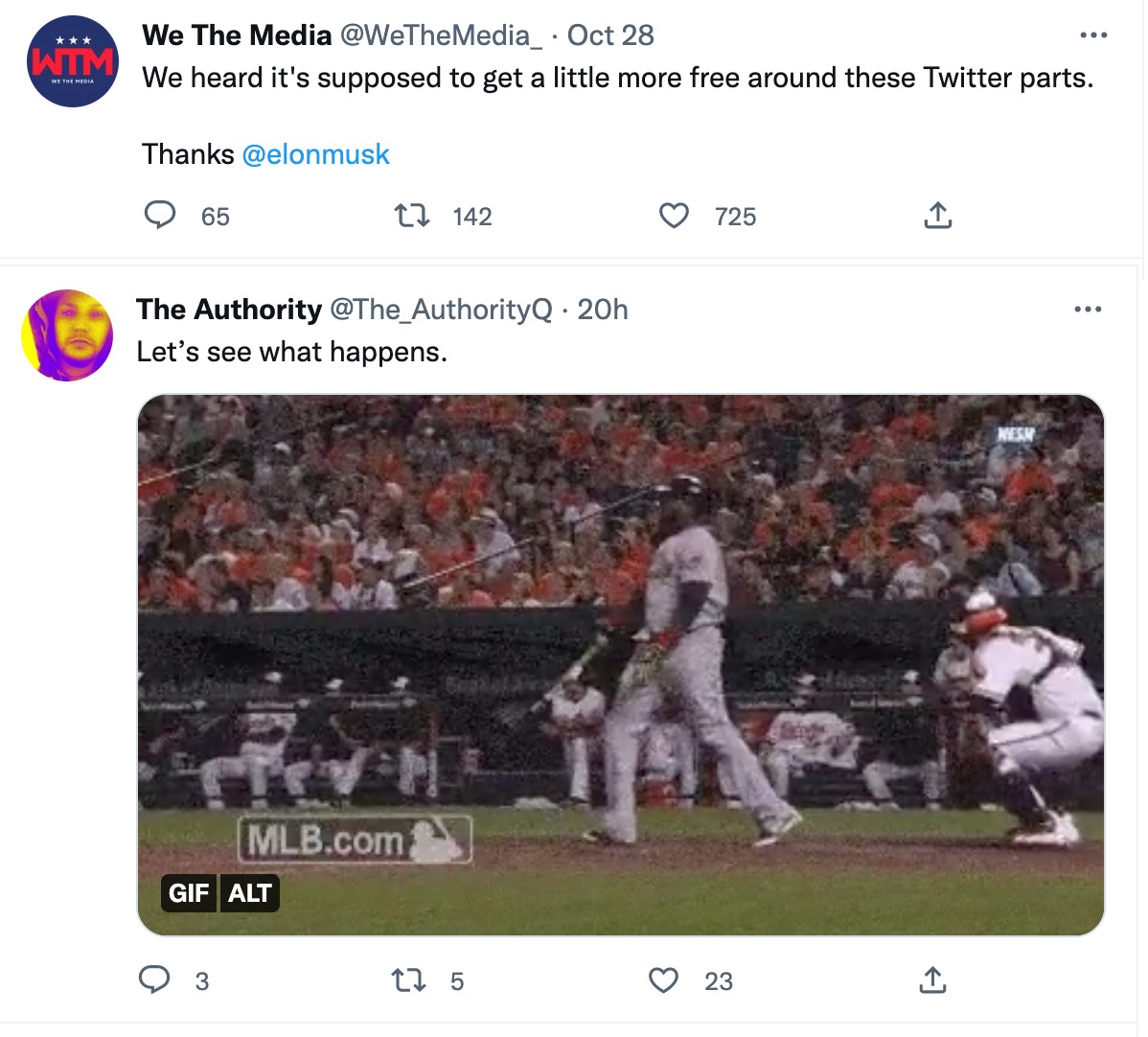 In addition to these known QAnon supporters rejoining Twitter, there were tens of thousands of tweets about QAnon between October 21-31, with these users mentioning keywords and phrases related to the conspiracy theory, including its slogan “where we go one, we go all” or “wwg1wga.”

Media Matters used Twitter data from the Dewey Square Group (sourced via the Twitter API) and found 50,000 tweets containing discussions related to QAnon posted between October 21-31. This activity spiked on October 25, when reports indicated that Musk would buy the company before the October 28 deadline.

Media Matters also found that accounts created since April — when Musk became the largest shareholder of Twitter (April 4) and made an unsolicited bid to buy the company (April 14) — were largely driving this discussion of QAnon. In fact, nearly 50% of all accounts tweeting QAnon terms between October 21-31 were created after April 1.

Musk has seemingly given a green light to QAnon users to return to the platform and push the dangerous QAnon conspiracy theory.

QAnon discussion is defined as tweets with any of the following key words or phrases: “wwg1wga,” “where we go one, we go all,” “save the children,” “q drop,” “q drops,” “q clearance,” or “anons.”