“General Michael Flynn, the 33 year war hero who has served with distinction, has not retained a good lawyer, he has retained a GREAT LAWYER, Sidney Powell,” Trump tweeted Thursday morning. “Best Wishes and Good Luck to them both!”

General Michael Flynn, the 33 year war hero who has served with distinction, has not retained a good lawyer, he has retained a GREAT LAWYER, Sidney Powell. Best Wishes and Good Luck to them both!

After pleading guilty to charges of lying to the FBI in December 2017, Flynn began cooperating with Mueller’s team. Last week, he fired his legal team, a move that “triggered speculation in legal and political circles that he’s considering backing out of his plea deal with the government in a play for a presidential pardon,” according to Politico.

Powell’s hiring should bolster that conjecture. She is a former federal prosecutor who specializes in federal appeals in commercial litigation, but has carved out a sideline as a Fox pundit. According to her website, “Sidney the Media Figure is highly sought to comment on current legal issues and government investigations—especially the special investigation lead by Robert Mueller and his chief lieutenant Andrew Weissmann,” who the site describes as the “true villain” of her 2014 book, Licensed to Lie: Exposing Corruption in the Department of Justice.

Indeed, Powell is one of a handful of lawyers that Fox’s pro-Trump hosts have relied upon to put a legal gloss on their alternative narrative that Mueller’s investigation was the result of an illegal anti-Trump conspiracy by the “deep state.” She has used Fox’s platform to claim the probe “was set up, basically, to impugn this presidency and to make it as hard as possible for Mr. Trump to carry out his duties” and to describe investigators as “creeps on a mission to destabilize and destroy this president.”

While Powell has a lower profile than more regular legal commentators like Alan Dershowitz or Victoria Toensing, the former federal prosecutor has still made more than two dozen appearances on Lou Dobbs’ Fox Business show, and at least nine additional weekday interviews on Fox News, since January 2018.

Powell has an extremely active presence on Twitter, where she has argued that Flynn’s prosecution is a “horrific injustice” and that Mueller’s team engaged in “obstruction” by “hiding evidence that exonerates him.” As part of a pattern of frequently amplifying conspiratorial rants about the Mueller probe, Powell has also repeatedly retweeted major accounts that promote the QAnon conspiracy theory and shared articles from Alex Jones’ conspiracy theory website, Infowars (in October 2017, Powell was also interviewed by then-Infowars Washington bureau chief Jerome Corsi.).

Powell’s conspiratorial Twitter musings are not limited to the Mueller probe. She has repeatedly tweeted about George Soros, the Jewish billionaire philanthropist who is regularly targeted with anti-Semitic conspiracy theories. In December, she accused the Federal Reserve of deliberately trying to “#crash the market” as part of a deliberate plot to destroy Trump “and enrich #Soros & themselves. #Soros has done it before.” 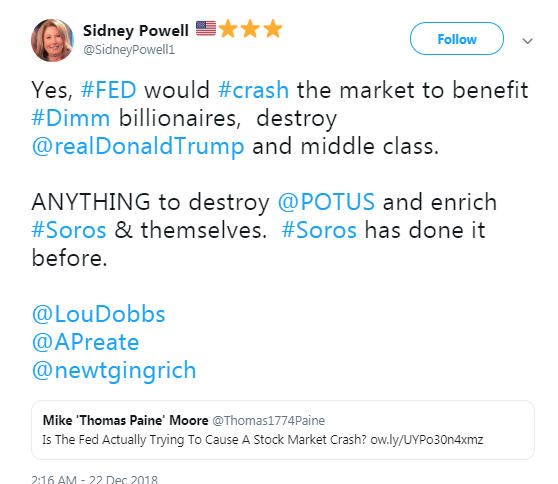 She has also tweeted that “#Islam is only ‘religion’ of which I am aware that seeks to destroy others & would disenfranchise > 1/2 world population.”

Powell’s website sells T-shirts describing Mueller and six other key law enforcement figures in the case as “Creeps on a Mission.” The shirt is “a great gift for those who know the Mueller investigation of the President is its own crime,” according to the website. 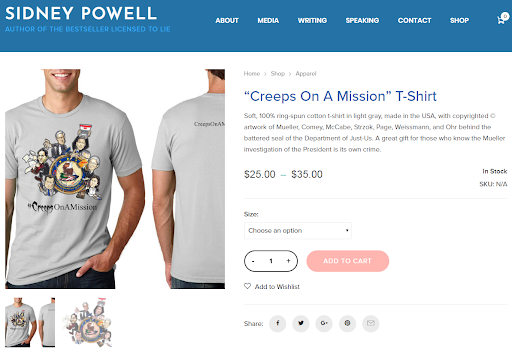 One of Powell’s “other websites” is CreepsOnAMission.com, which breaks down the iconography of the shirt and provides capsule descriptions of the purported malfeasance of the people it depicts. It also embeds clips on that theme from the Fox shows of Sean Hannity and Mark Levin, claims “Mueller and his Hillary favored henchmen” are trying “to ensnare anyone he can reach within the circle of President Trump,” and urges readers to “Support President Trump & Our Mission” by wearing the shirt “to show your support for President Trump & The Rule of Law!”

Hannity frequently cites Powell’s book for its harsh criticism of Weissmann, a veteran federal prosecutor and former general counsel at the FBI who became a key member of Mueller’s team.

On Wednesday, Hannity praised Flynn’s hiring of Powell, arguing that a “change of course certainly looks imminent” for Flynn because “Powell said 16 months ago he should withdraw” his guilty plea.

Indeed, in a February 2018 op-ed for The Daily Caller, Powell wrote that Flynn should withdraw his plea because the newly appointed judge in his case, Emmet G. Sullivan, was likely to dismiss the charges against him. (Powell was one of a series of Flynn defenders who misinterpreted one of Sullivan’s orders to speculate that the judge believed Flynn might have been the victim of prosecutorial misconduct.)

In another op-ed published shortly before Flynn’s sentencing hearing in December, Powell claimed that Mueller had obstructed justice by supposedly destroying or suppressing evidence he was required to provide to Flynn’s legal team. On Fox, she speculated that because of this, Sullivan would “throw the entire prosecution of Gen. Flynn out for egregious prosecutorial misconduct.”

Instead, at the hearing, the judge rejected the notion that Flynn had been mistreated by investigators, blasted Flynn himself, and convinced him to delay sentencing and continue working with Mueller’s team rather than risk jail time.

After signing on as Flynn’s lawyer, Powell said in a statement that Flynn “will continue to cooperate with the government in all matters.” But Fox commentator Sara Carter, whose slanted reporting from pro-Trump sources helps fuel the Fox counternarrative on Mueller, said on Hannity’s program that Powell also stressed to her in an interview that “it would take about 90 days to get through [Flynn’s] file,” which could delay any sentencing and leave open the possibility that he could withdraw his plea.

Fox’s pro-Trump commentators have been urging Flynn to withdraw his plea since he pleaded guilty in the first place. They have also been calling on the president to pardon Flynn and other purported “victims” of Mueller’s investigation -- a notion Trump’s team has reportedly entertained.

If Trump does ultimately pardon Flynn, the former national security adviser would be only the latest recipient in a series of clemency decisions influenced by the network.