As The Wall Street Journal published its investigative series on Facebook and whistleblower Frances Haugen testified to Congress about the platform’s internal research on the harms of its products, the company spent at least $10 million for online and TV ads promoting its products -- Facebook Groups, Messenger, Instagram, and others -- and claiming it supports internet regulations.

On October 5, Haugen testified to Congress, following several weeks of public reporting about how broadly Facebook’s problems are known inside the company. This scrutiny stemmed from the Journal’s investigative series, which began running on September 13. The series reported on documents from Haugen showing the platform gave prominent users blanket exemptions to its policies, prioritized engagement and user time on the platform regardless of the consequences, and allowed vaccine misinformation to flourish.

Amid the reporting and since Haugen’s testimony, Facebook has been on the defensive, trotting out its executives and spokespeople who have desperately tried to salvage their company’s already tarnished reputation by downplaying the platform’s responsibility and attacking both Haugen and the Wall Street Journal.

Simultaneously, Facebook has spent millions on ads online ($5.4 million), on its own platforms (at least $300,000), and on TV ($4.4 million). According to data obtained from Pathmatics, the company spent at least $5.4 million for online ads (not including ads on its own platforms) between September 15 and October 15. Many of these were video ads that promoted Facebook products, including Messenger, Instagram, and Facebook Watch, Portal, and Groups.

CEO Mark Zuckerberg told investors on October 25 that the company is focused on attracting and maintaining younger users, which is consistent with its multimillion-dollar expenditure on ads for YouTube, Twitch.tv, and fandom.com -- all of which have predominantly young audiences.

Some of the Facebook Group ads paint a saccharine picture of the feature, claiming that using it will help you to “take on anything.” In reality, Facebook is filled with groups promoting COVID-19, election misinformation, and other sensational content. In fact, Media Matters identified over 1,000 active Facebook Groups dedicated to promoting COVID-19 or election misinformation, with over 2.2 million combined members.

Some of the ads highlight three groups with innocuous or cheerful subjects -- Outdoorsy Gals (over 84,000 members), Not Wasting My Twenties (over 48,000 members), and Screw it, let’s talk astrology (over 158,000 members). Yet, there are larger right-wing groups on the platform -- like Kayleigh McEnany Fan Club (over 485,000 members), Impeach Joe Biden (over 458,000 members), and Back The Blue (over 207,000 members) -- that spread misinformation and sensational content to a much bigger audience.

Facebook is also promoting the groups feature explicitly on its own platform, with at least four ads on Facebook and Instagram that highlight a group for women of color affected by breast cancer. (Cost and impressions data are not available for these ads.) 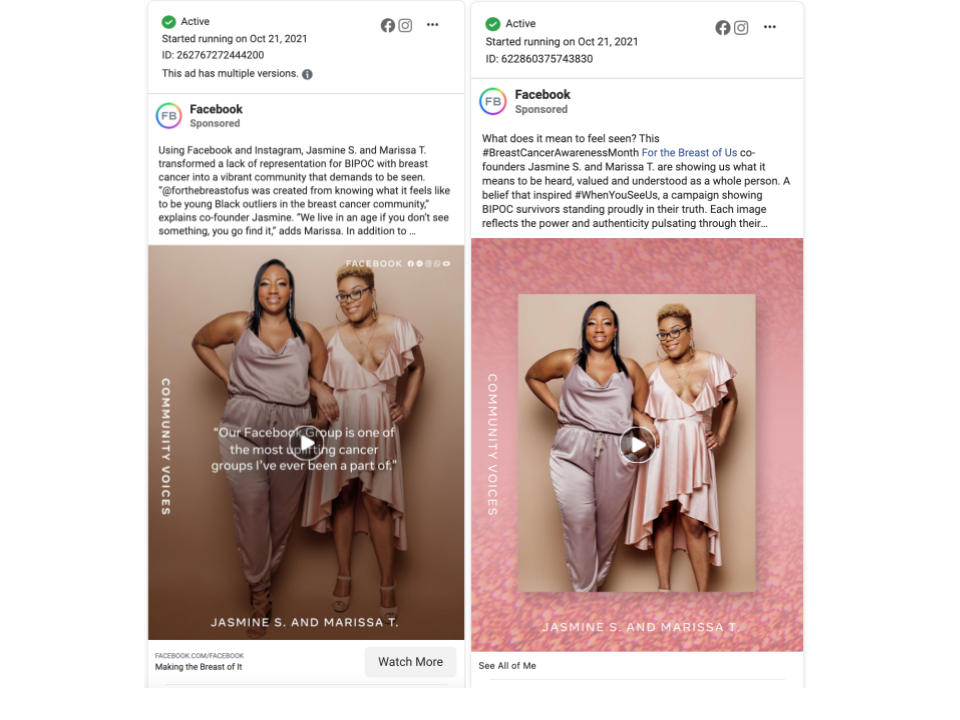 In addition to promoting its products, Facebook is also running ads on its platforms that claim the company supports internet regulation and reform of Section 230 (a provision that protects websites from lawsuits for user behavior). The ads are consistent with Facebook’s recent narrative that it supports internet regulation, even though it is unclear what exactly the company supports and it continues to undermine regulatory proposals.

The company ran at least 129 that were created within the week after Haugen testified to Congress -- on October 7 or 12 -- and called for internet regulation reforms. According to data from the Dewey Square Adwatch tool set, the ads ran on Facebook and Instagram, were worth at least $300,000, and earned at least 16.2 million impressions. 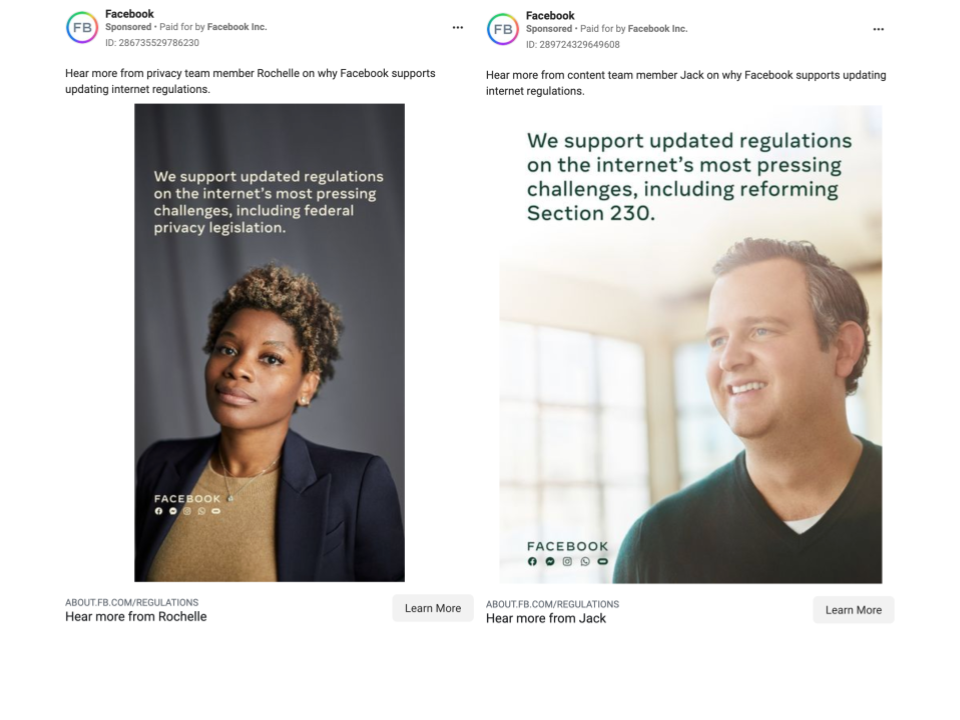 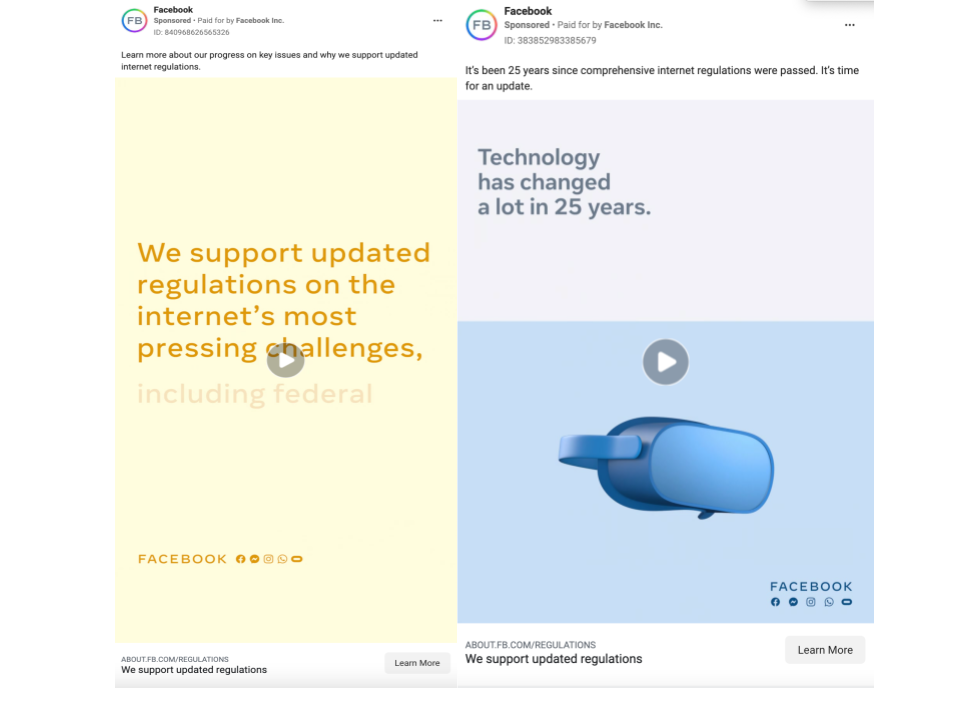 These ads about internet regulation, safety, and privacy have also appeared on some podcasts and newsletters, such as The New York Times’ The Argument, Punchbowl News’ The Daily Punch and Politico Playbook.