Update (1/14/22): Following The Wall Street Journal’s reporting, Facebook asked its Oversight Board to review its cross-check system. As part of the review process, the board requested public comments from those with expertise on various aspects of the system. On January 14, Media Matters submitted a comment to the board, offering, in part, the following guidance:

The Board has asked respondents for comments on Meta’s cross-check system and recommendations to ensure that it is neutral and free of political and other biases. However, there will be no neutral cross-check system so long as Meta continues to prioritize and incentivize growth and positive publicity over solving serious issues that plague its platforms — including misinformation and hate speech that has caused real-world harm. Given the immense scale of Meta, with more than 3 billion people using its platforms, and its vast societal influence, the company should be dedicated to minimizing the risk of harm, both on and off the platform.

On September 13, The Wall Street Journal published the first in a series of articles based on internal Facebook documents. According to the reporting, the program, known as “cross check” or “XCheck,” was “initially intended as a quality-control measure for actions taken against high-profile accounts, including celebrities, politicians and journalists.” But the program grew to include at least 5.8 million users in 2020 -- “pretty much anyone regularly in the media or who has a substantial online following, including film stars, cable talk-show hosts, academics and online personalities with large followings” -- and it protected public figures who used the platform for harassment or incitement of violence.

Today, it shields millions of VIP users from the company’s normal enforcement process, the documents show. Some users are “whitelisted”—rendered immune from enforcement actions—while others are allowed to post rule-violating material pending Facebook employee reviews that often never come.

This reporting on the program underscores a recurring problem at Facebook. The company consistently prioritizes public opinion and press coverage over actions addressing its problems. Among other things, this approach manifests in capitulation and preferential treatment to right-wing pages to avoid unsubstantiated claims that it is censoring right-wing accounts. (Media Matters and others have demonstrated again and again that no such bias or censorship exists. In fact, some right-wing personalities who post sensational and misleading content earned significantly more engagement in 2020 and 2021 than in previous years.)

For standard users, posts that incite violence or contain misleading content are considered violations of the platform’s policy. For high profile users, Facebook often delayed action on such content or didn't take it at all. Some were even given “whitelist” status, offering blanket exemptions from enforcement. And in some cases, Facebook even asked fact-checking partners to retroactively change their findings on posts from high-profile accounts.

There are multiple posts on the former president's page that seemingly incite violence; altogether, they have earned over 2.2 million interactions. According to the Journal, one of these posts, in which Trump wrote “when the looting starts, the shooting starts,” reportedly scored 90 out of 100 from Facebook’s automated system, indicating a high likelihood it violated the platform’s rules. “For a normal user post, such a score would result in the content being removed as soon as a single person reported it to Facebook,” the Journal wrote.

Here are a few other examples of Trump’s posts that seemingly violate Facebook’s policies: 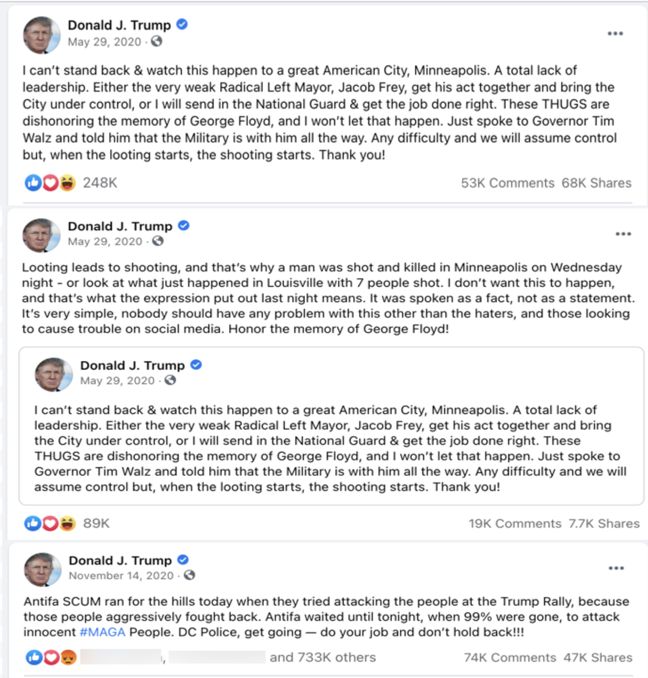 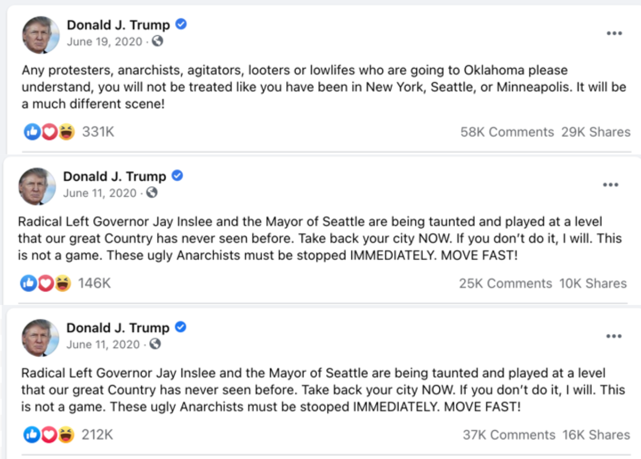 In a review of Trump’s posts from January 1, 2020, to January 6, 2021, Media Matters identified over 500 posts that contained misinformation about COVID-19 and over 360 that attempted to undermine trust in the U.S. election process. 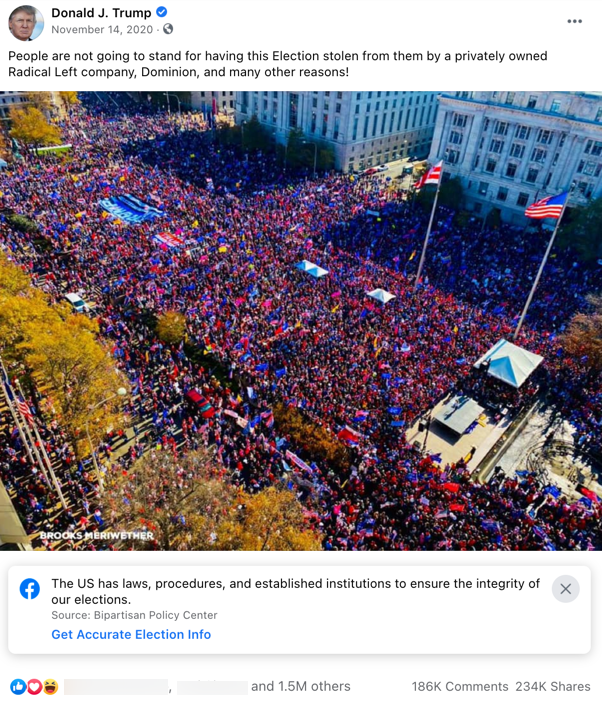 In a review of posts from members of Congress between Election Day and January 13, Media Matters found that some members of the “sedition caucus” — the 147 Republican members of Congress who voted against certifying the election results after pro-Trump rioters stormed the Capitol — used either their official or unofficial Facebook pages (or both) to promote election misinformation about voter fraud and “Stop the Steal” events. 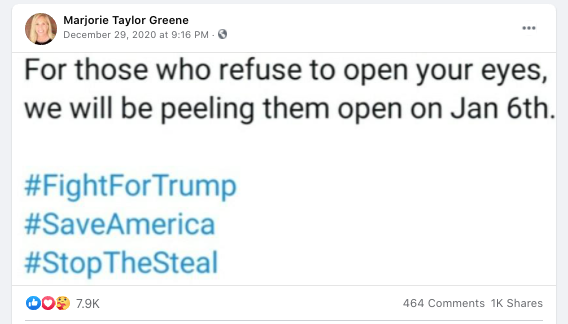 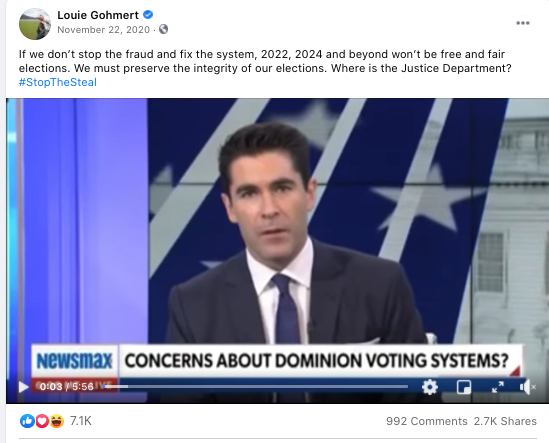 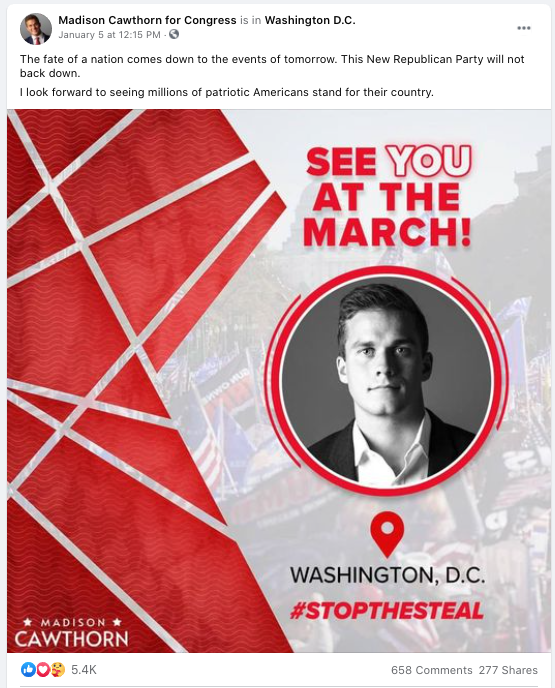 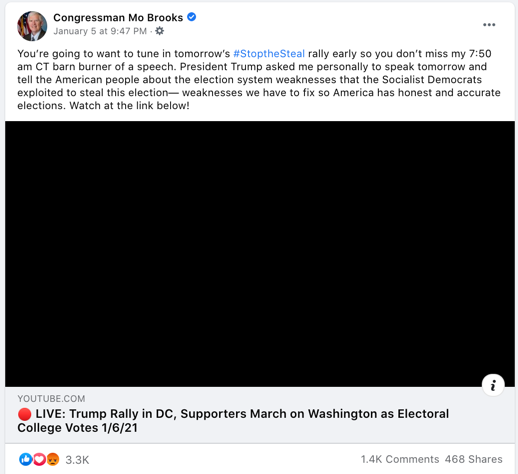 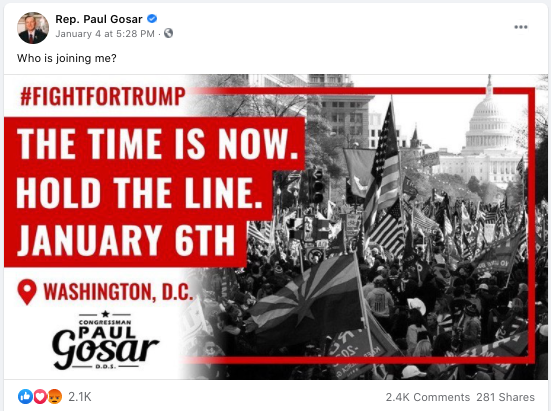 Candace Owens and Matt Walsh similarly post sensational and misleading content, with Owens earning millions of views on many of her videos. For example, Owens' video about last spring’s protests against police brutality following George Floyd's killing has been viewed more than 95 million times, and her February video with the caption “Everything you were told about the ‘Capitol Riot’ is a lie” has 8.1 million views.

Notably, Shapiro, Owens, and Walsh have used their Facebook pages to push harmful COVID-19 and vaccine misinformation, often downplaying the virus and the effectiveness of masks and the vaccine.

Tucker Carlson has used his show’s Facebook page to share segments in which he pushes vaccine misinformation.

In one of these anti-vaccine segments, from April 13, Carlson went as far as speculating that public health experts still recommend people wear masks and practice social distancing after being vaccinated because “maybe it doesn't work and they’re simply not telling you that.” Media Matters found that between April 13 and 16, a clip of that segment on his show's Facebook page was the most shared video among political news pages, with roughly 43,000 shares. The video was also viewed more than 1 million times. Another clip of the segment was also among the top 10 most shared videos from political pages between April 13 and 16. This video was shared over 24,000 times and viewed roughly 675,000 times.

Donald Trump Jr. earned millions of views on posts with misleading information on COVID-19 mitigation measures and other sensational content 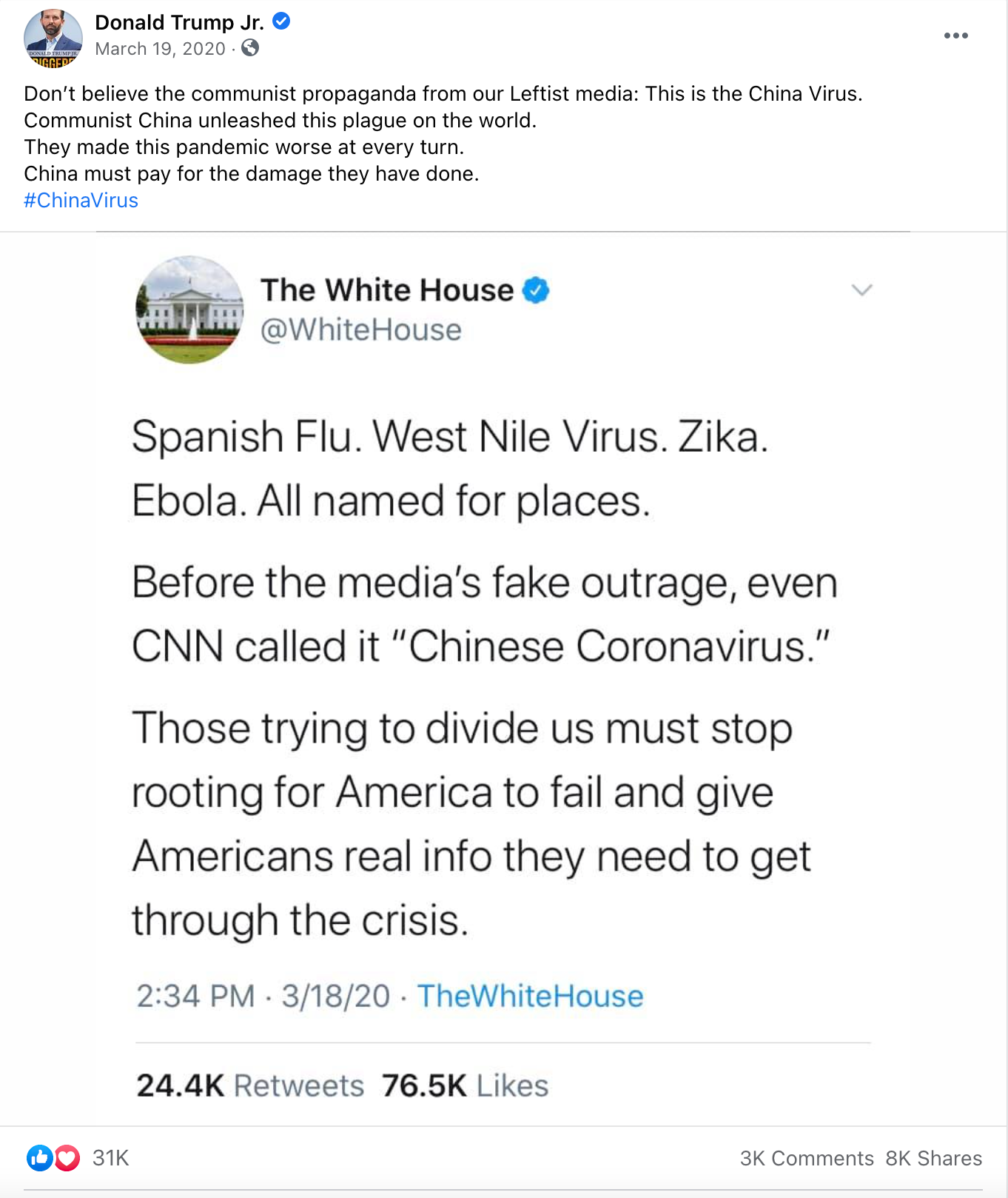 Other right-wing personalities, such as Dan Bongino and Terrence K. Williams, posted election and COVID-19 misinformation

Right-wing media personality Dan Bongino’s Facebook page follows a similar pattern as Ben Shapiro’s, with Bongino’s engagement drastically increasing in 2020 and 2021, according to Media Matters' review of CrowdTangle data. Bongino’s page earned over 351 million interactions in roughly the last four years -- between January 1, 2017, and March 22, 2021. In 2020, he earned more than 10 times the engagement of 2019.

Bongino, along with other right-wing media personalities such as Terrence K. Williams, have in particular earned high engagement on sensational and misleading posts about the election and the January 6 insurrection. 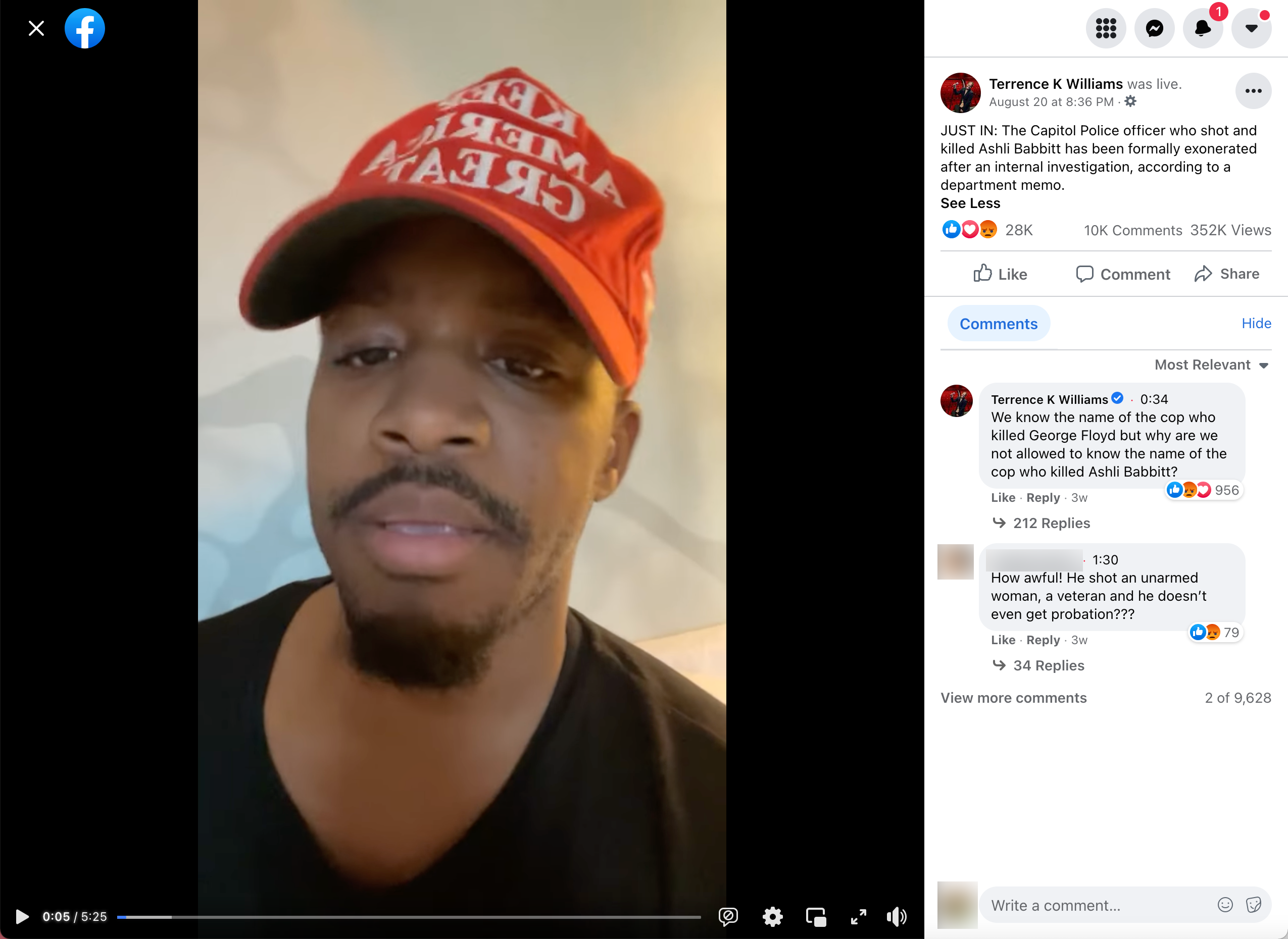 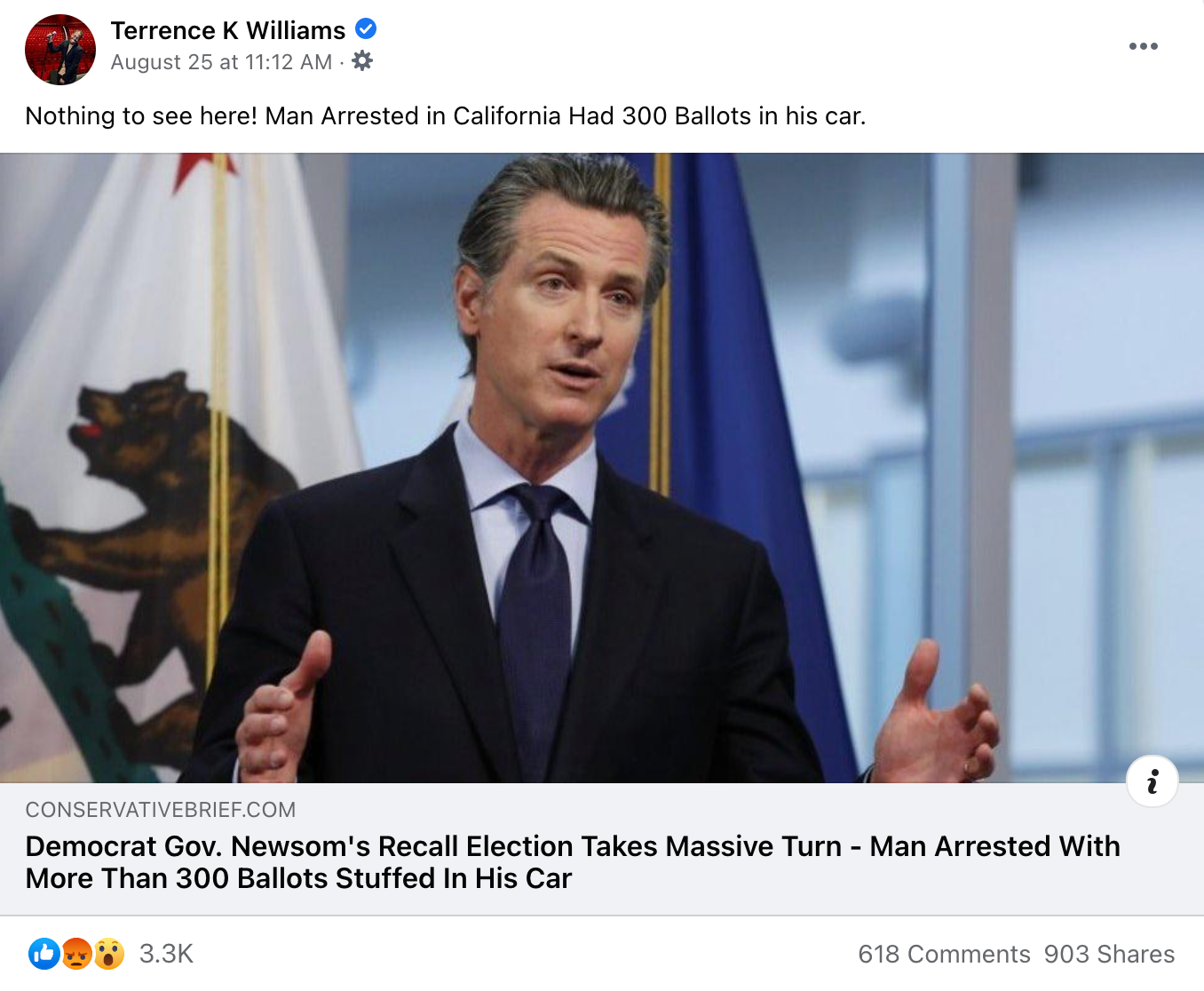 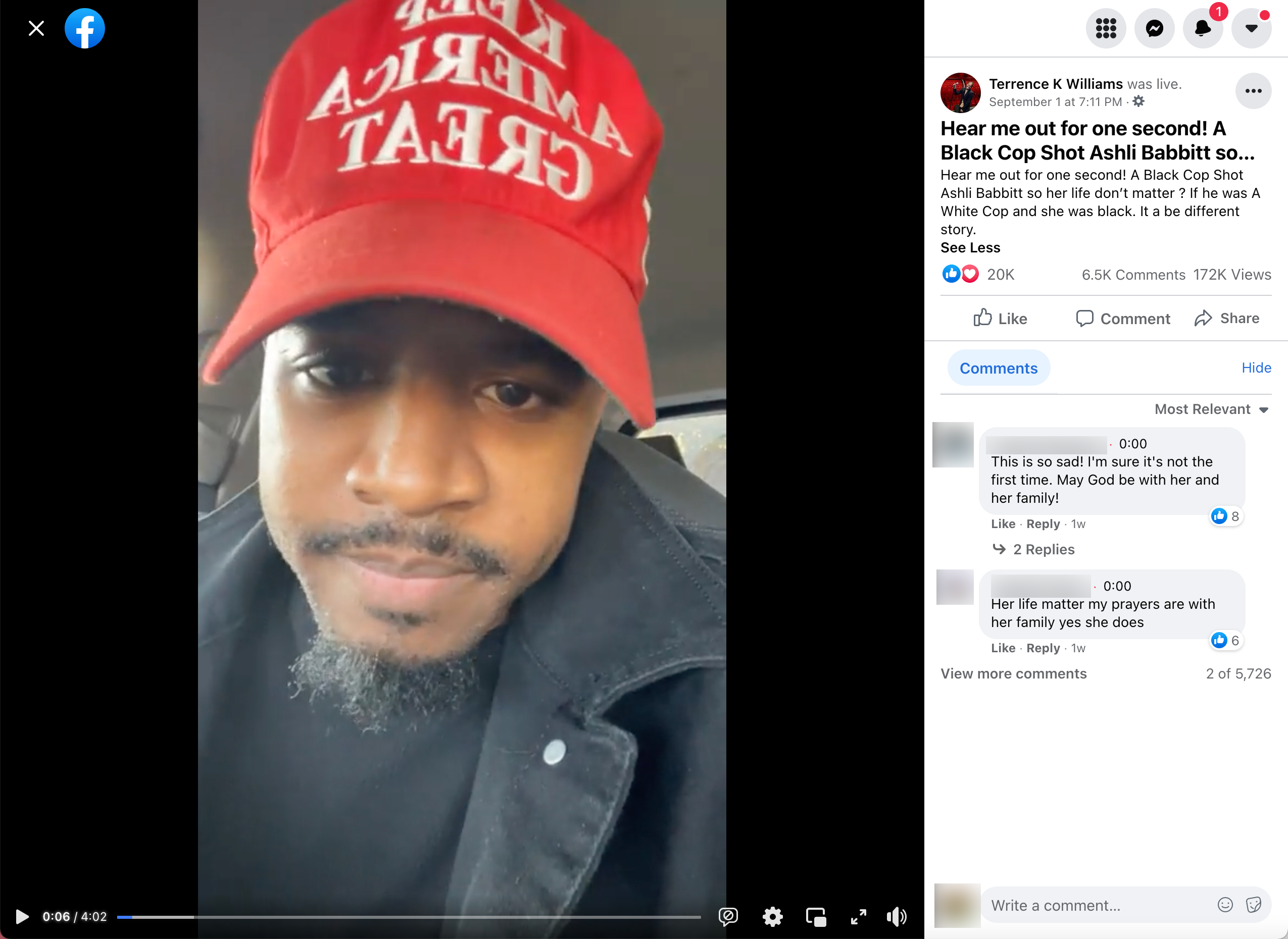 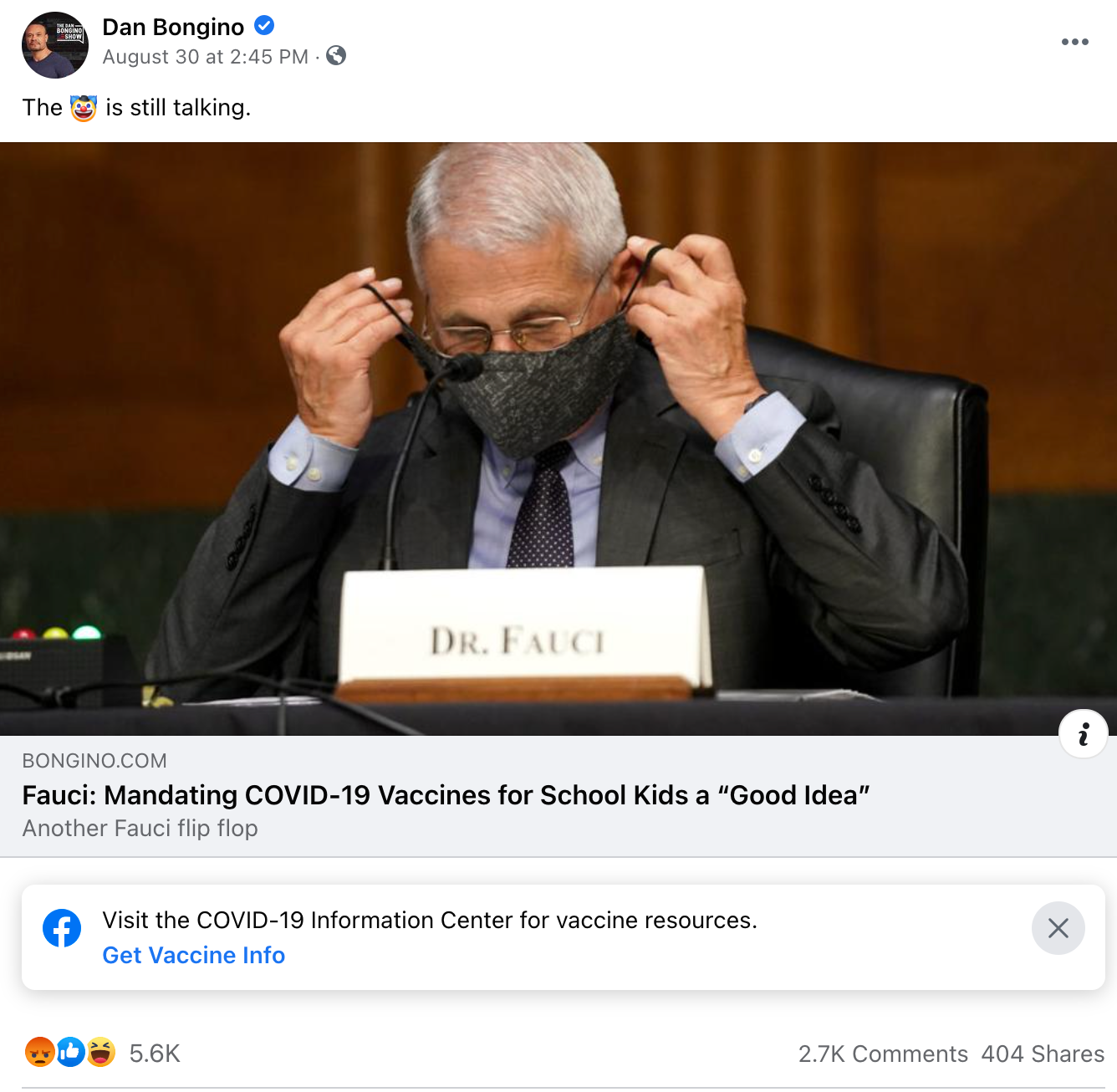 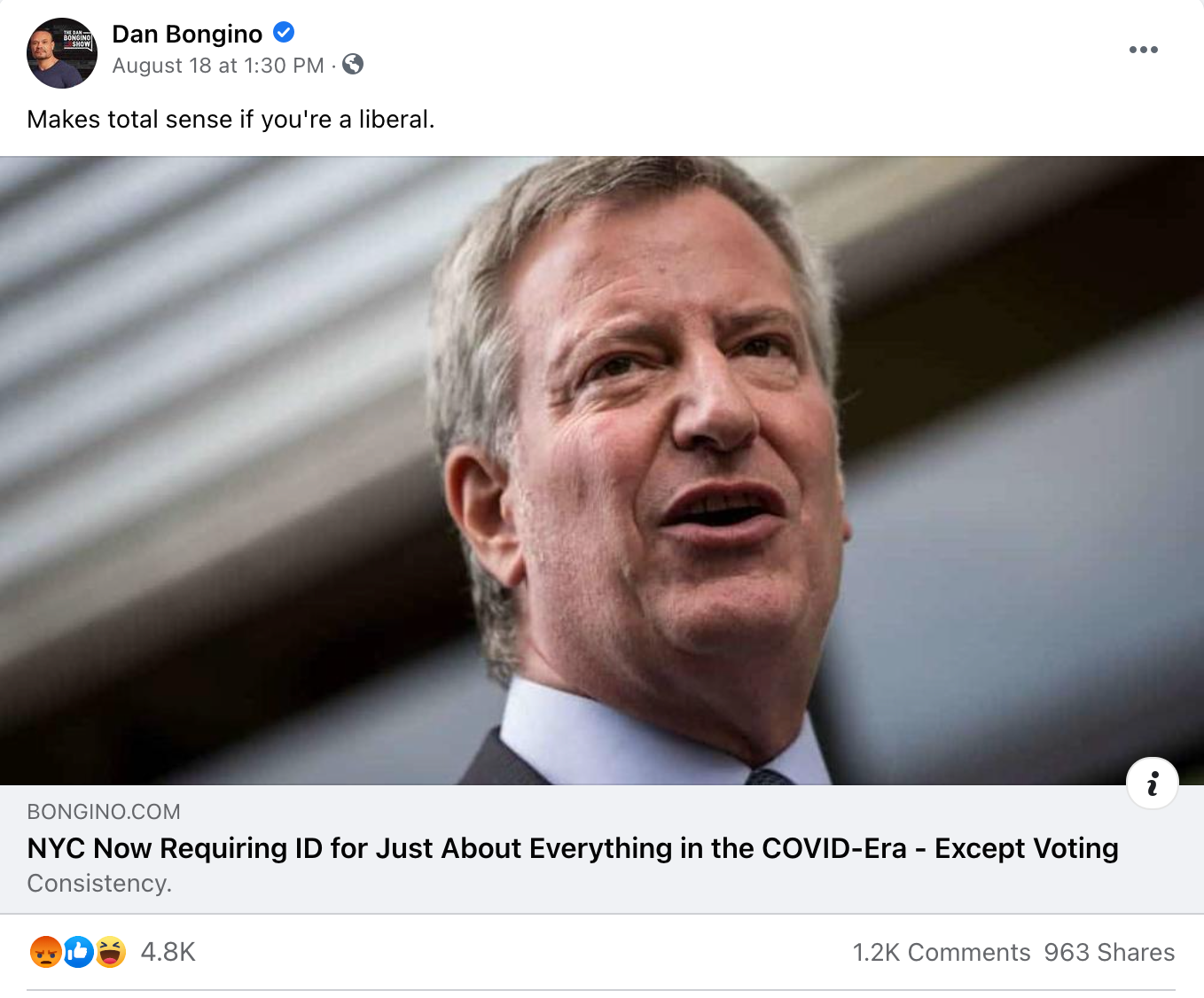 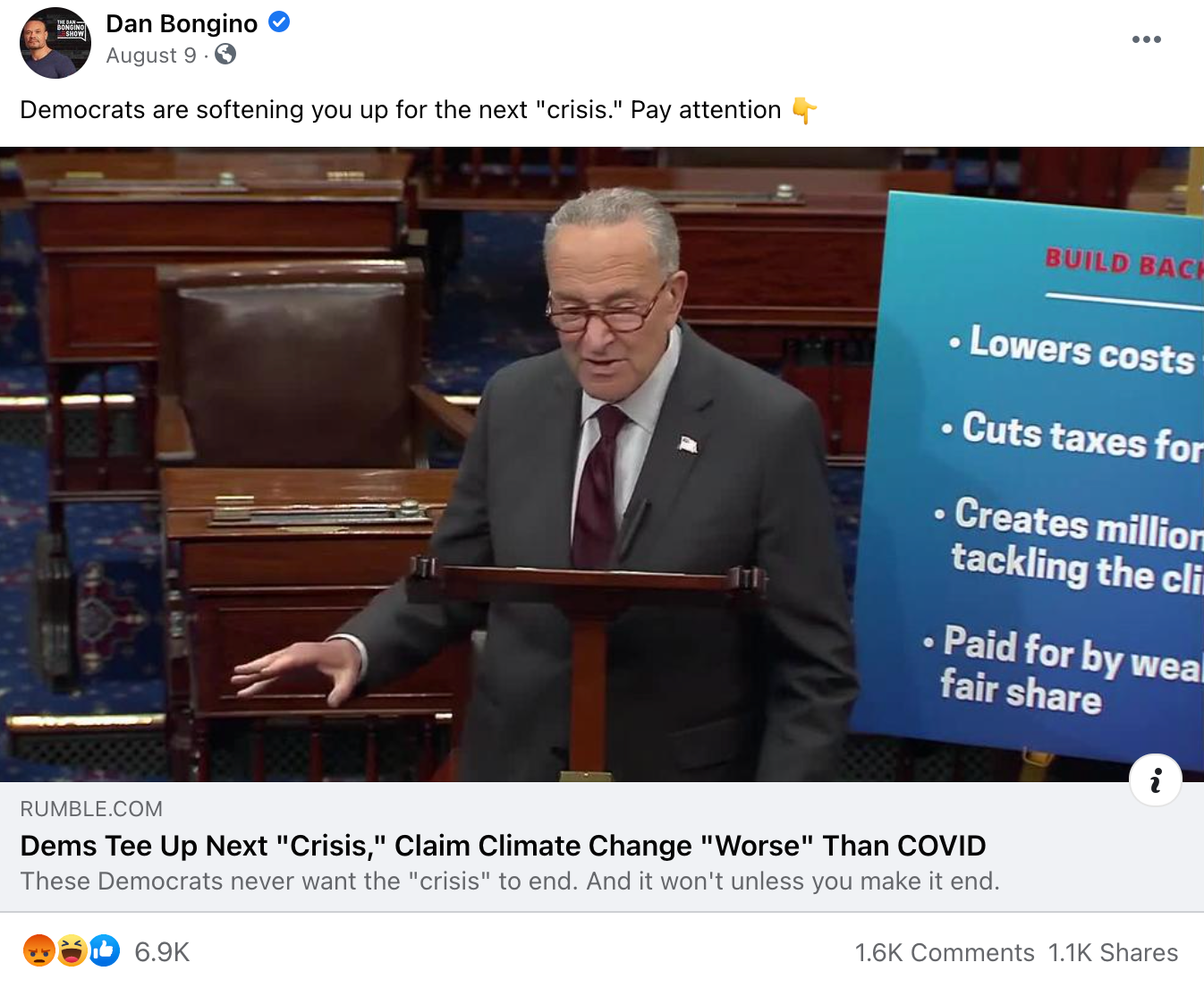 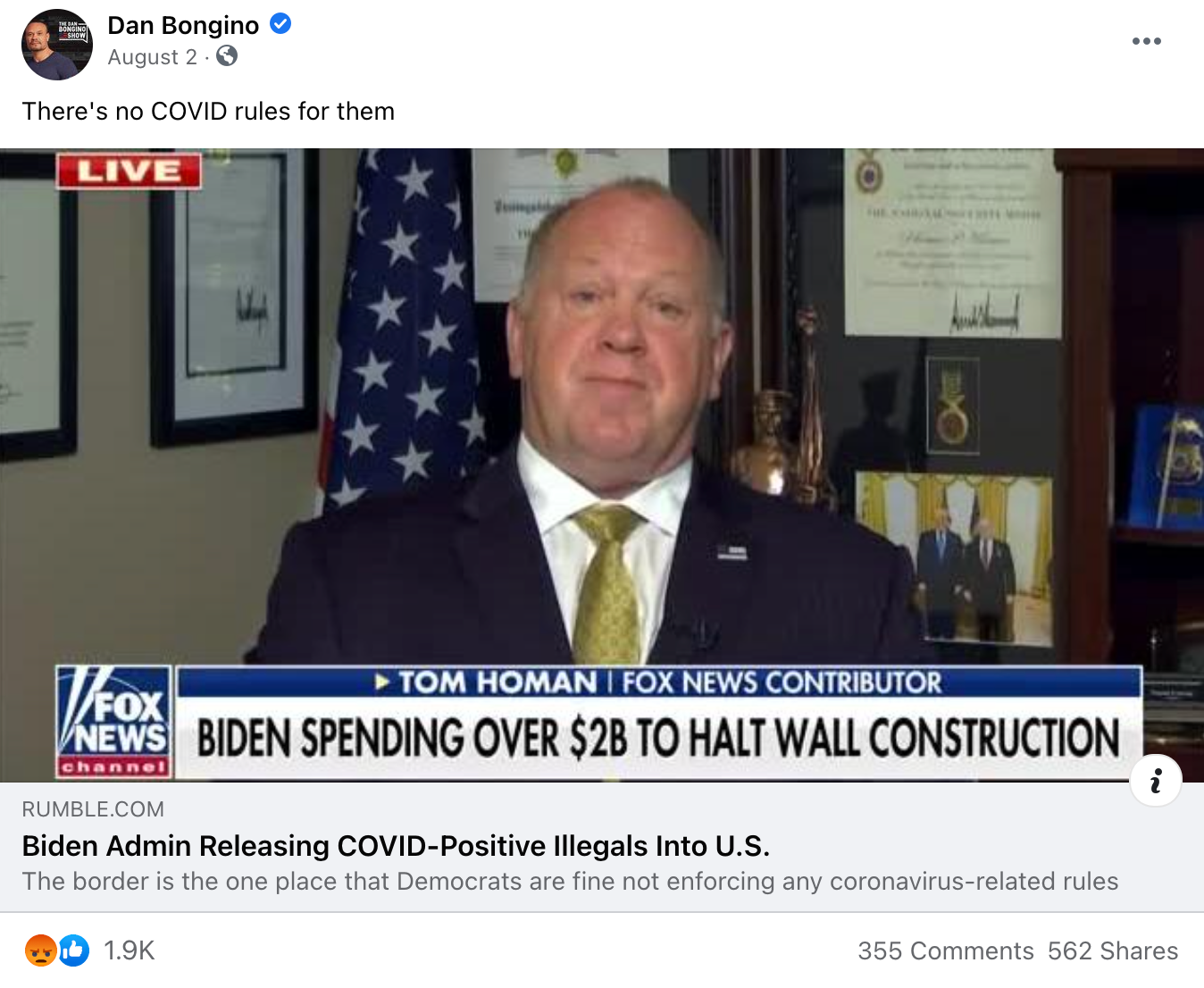 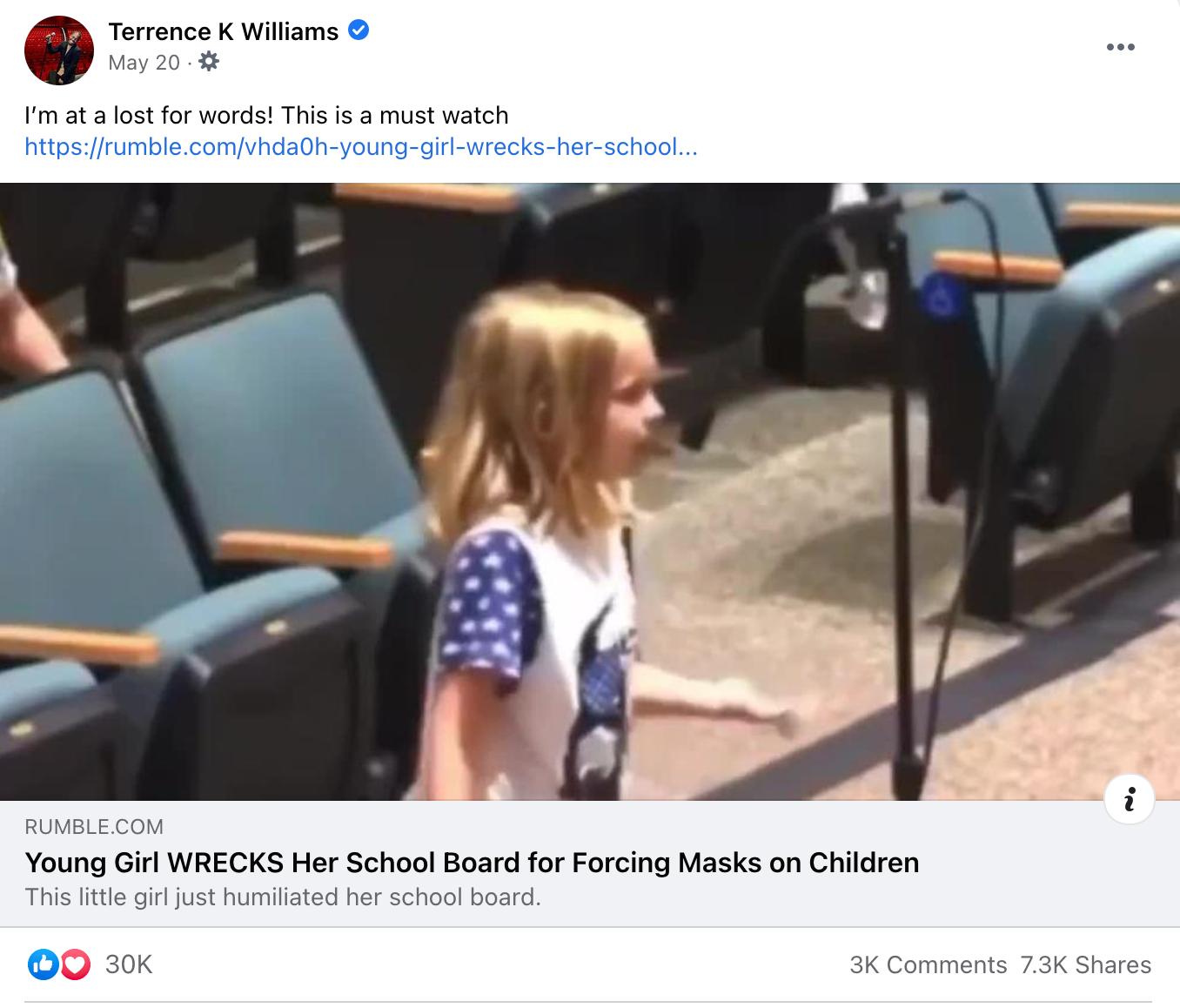 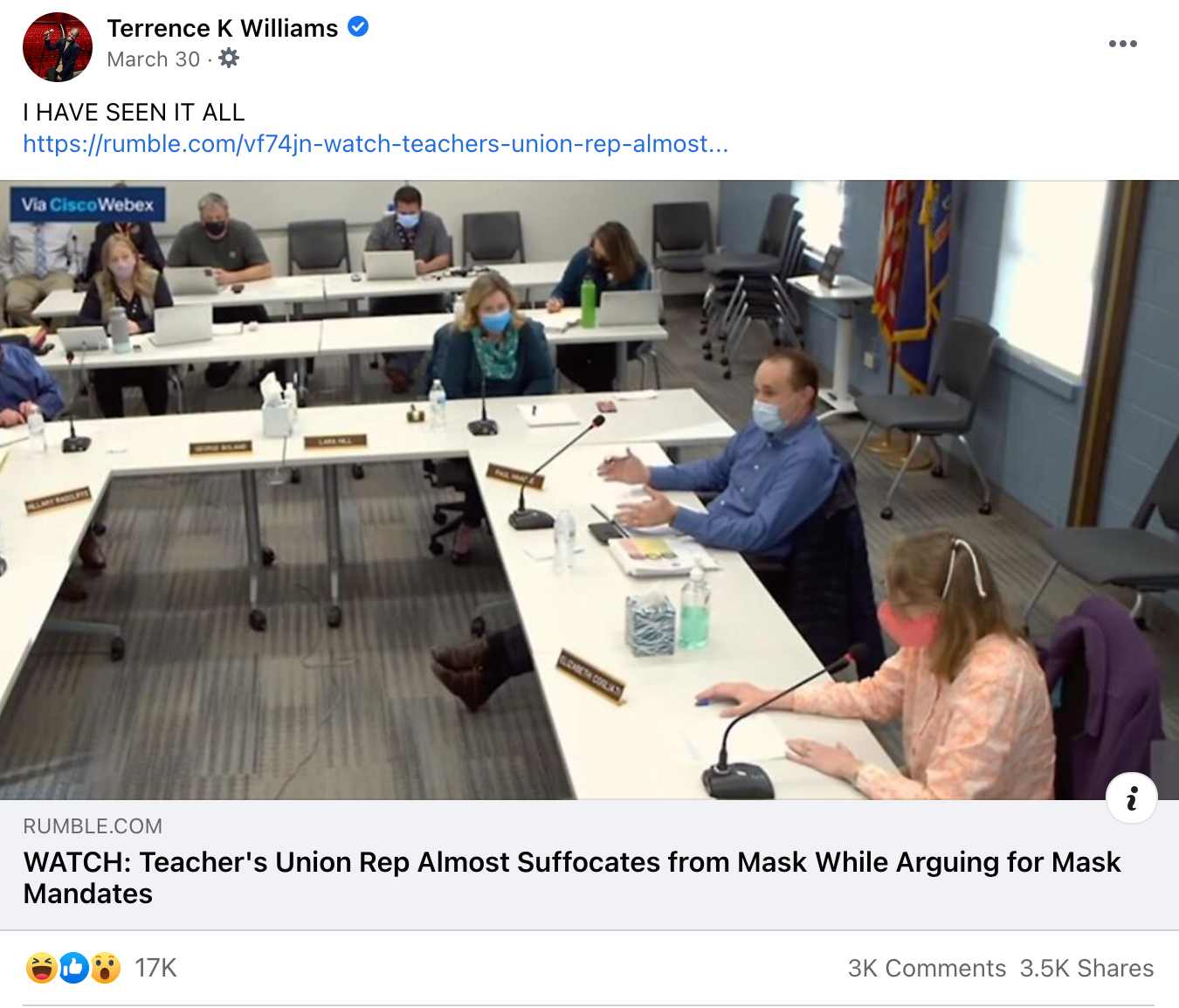 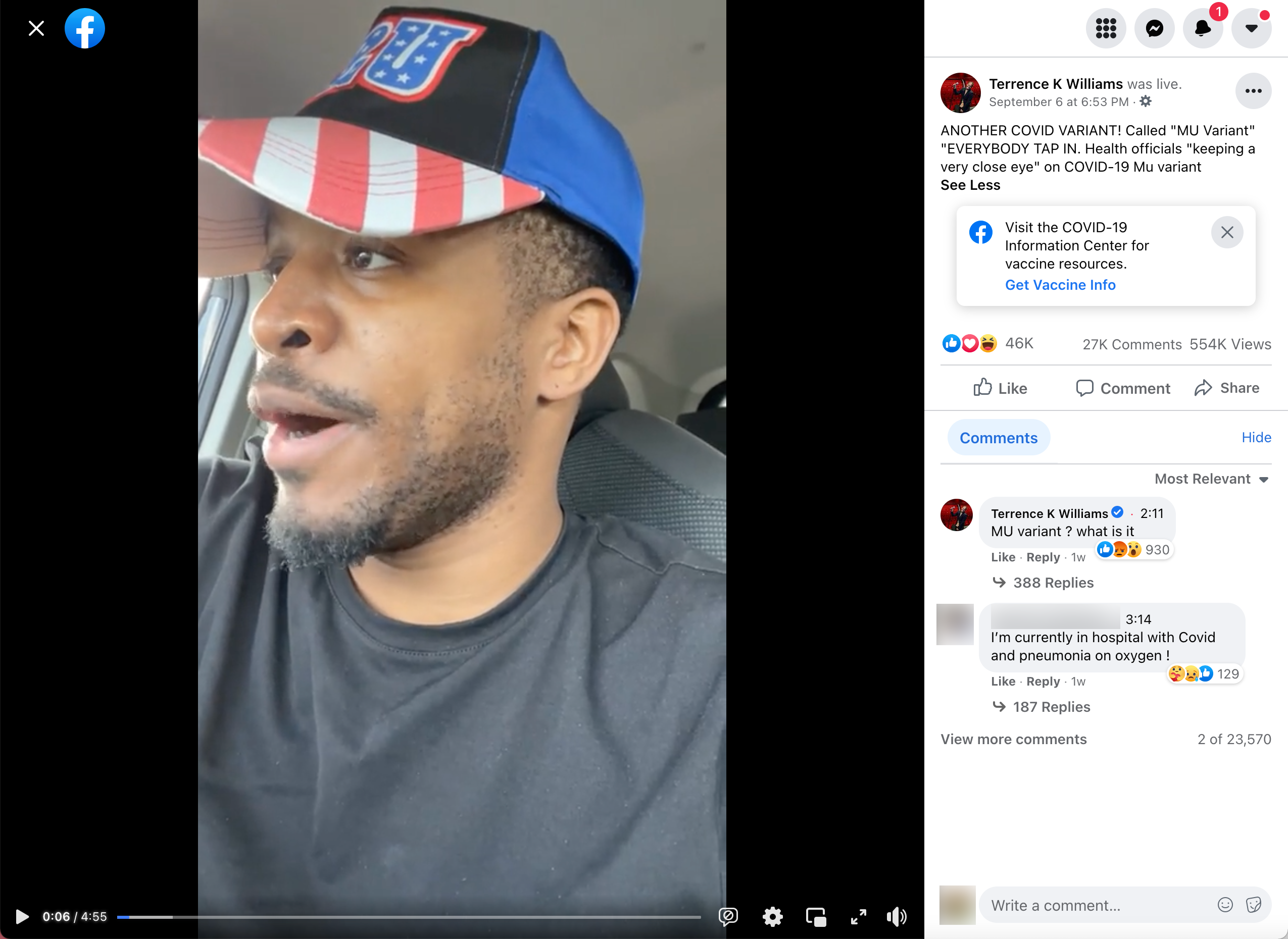