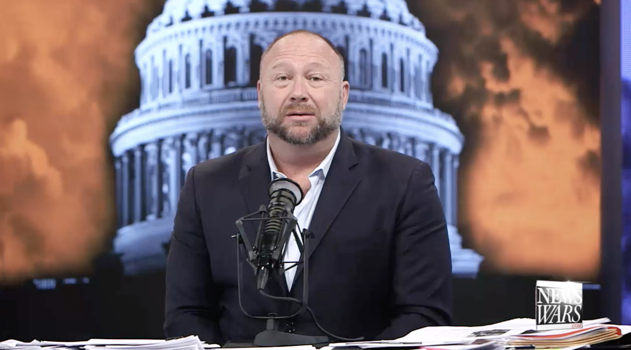 The attacks on health care workers are the natural progression of a previous conspiracy theory pushed by Infowars and other right-wing outlets: that the novel coronavirus outbreak in the United States was being faked by hospitals, which were actually empty as evidenced by footage of medical center parking lots.

The right-wing conspiracy theories about hospitals and medical workers have become an added burden on medical workers who are trying to stem the coronavirus outbreak. As NBC News’ Ben Collins reported, health care workers are “dealing with a bombardment of misinformation and harassment from conspiracy theorists, some of whom have moved beyond posting online to pressing doctors for proof of the severity of the pandemic.”

Jones and Infowars are helping fuel those attacks. During his May 5 broadcast, Jones claimed that some hospital workers were killing patients and saying they died of COVID-19 in order to help boost hospital profits -- and also to carry out a globalist eugenics plot. Jones called nursing homes “eugenics death camps” and claimed, “It’s the blue cities and the blue states that have perfected the corruption where you see almost all the deaths because that’s where you’ve got hospitals where you’ve got order-followers, who are very stupid, with a few doctors and the bioethics board on top, like Gov. Northam, who used to run the baby-harvesting program in Virginia.”

Jones tied his conspiracy theory about health care workers making money off of coronavirus patients to a claim that “nurses are making a half million a piece because they are carrying out Nazi operations” by harvesting the organs of healthy babies. Jones connected the supposed practice of killing patients for eugenics purposes to people including Microsoft co-founder Bill Gates, a frequent target of his conspiracy theories.

Jones’ health care worker conspiracy theories go beyond hospital employees. He has also suggested that people working at drive-thru COVID-19 testing sites are government plants tasked with creating “as much hysteria as possible.” In a video posted April 7 to Infowars’ streaming platform banned.video, Jones claimed that “because someone’s wearing a white outfit and wearing masks and says they are doing COVID-19 testing on you,” that doesn’t mean they aren’t part of “criminal groups hiding within the national security apparatus.”

According to Infowars, demonstrations by health care workers to counter protests against public health orders are (naturally) staged events. In an April 23 video posted to banned.video, Infowars host Owen Shroyer commented on a video shot by a stay-at-home order protester that showed a medical worker briefly standing in front of a protester’s car. Shroyer said the video was evidence of “just another orchestrated leftist media event, like everything else they do.” Shroyer said of press photographers who captured the moment, “They knew that they could stage that photo and have it go viral and they may have even been giving orders to do that and paid off to do that. And then you have to doubt the veracity of the nurse. Is the nurse even real? Folks, that’s how fake these people are. … They’re so trained in propaganda -- that’s their mastery, that’s their art.” (Infowars has also been organizing rallies against public health orders in Texas.)

Infowars has been using the coronavirus outbreak to push wildly divergent conspiracy theories, in some instances downplaying the threat of the virus in order to provide cover for President Donald Trump, but in other instances claiming the virus is how “globalists” will carry out a massive depopulation plot through vaccines.

On the back of these various conspiracy theories have been product pitches for the Infowars Store. Jones first used the outbreak to hype the sale of his storable food after he had recently increased the price, before moving on to claim that supplements and other products he sells offer benefits against the novel coronavirus.