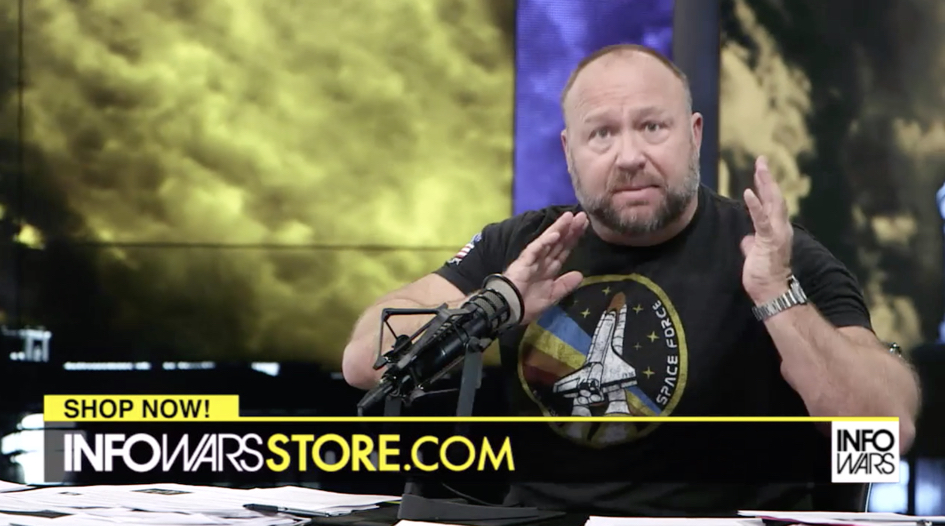 Far-right conspiracy theorist Alex Jones suggested that supplements he sells will help protect people from coronavirus just hours before reporting revealed that the Food and Drug Administration has warned Jones that he could face legal action if he continues to make similar claims.

On April 9, The Daily Beast reported that the FDA had sent a warning letter to Jones that instructed him to immediately stop selling products through his Infowars outlet that he has marketed as coronavirus preventatives. According to the letter, Jones’ on-air product pitches for colloidal silver products, including an Infowars toothpaste and a “wound dressing gel,” “misleadingly represent them as safe and/or effective for the treatment or prevention of COVID-19.” Those products have now been pulled from the Infowars Store.

Hours earlier, during his April 9 broadcast of Infowars’ The Alex Jones Show, Jones pitched several of his other products as protection against coronavirus. Referencing the coronavirus outbreak as part of “the globalist war against humanity that we predicted,” Jones said, “This virus does kill some some people, that’s why you need to take care of your body” before pitching several of the supplements he sells:

The Real Red Pill and Real Red Pill Plus are multivitamin-pregnenolone combinations, Survival Shield X-3 is liquid iodine, Vitamin Mineral Fusion is a multivitamin, and Winter Sun is a mixture of vitamins D, E, and K. As The New York Times reported in a March 23 article about increased consumer interest in dietary supplements, “None of these products have been shown to lower the likelihood of contracting the coronavirus or shortening its course, and taking large doses of them can potentially do harm.”

Media Matters reported that Jones began connecting the novel coronavirus outbreak to the products that he sells at his Infowars Store during broadcasts in February, when he urged listeners to buy bulk storable food packages from the website. Those pitches came shortly after the Infowars Store had doubled the price of its bulk food packages.

Then, Jones turned to pitching various supplements he sells as coronavirus preventatives. During a March 7 broadcast, Jones pitched a supplement called DNA Force Plus as well as colloidal silver products from the Infowars Store as “literally a stopgap” against the coronavirus. Most infamously, Jones claimed during a March 10 broadcast that a colloidal silver toothpaste that he sells “kills the whole SARS-corona family at point blank range.” The FDA referenced that claim in its letter as one of Jones’ violations of federal law.

Following his bogus toothpaste claim, Jones was sent a cease-and-desist order by New York Attorney General Letitia James that ordered him to stop “selling and marketing products as a treatment or cure for the coronavirus.” Even after the cease-and-desist, Jones has continued to suggest that the products he sells offer some benefit against the coronavirus.