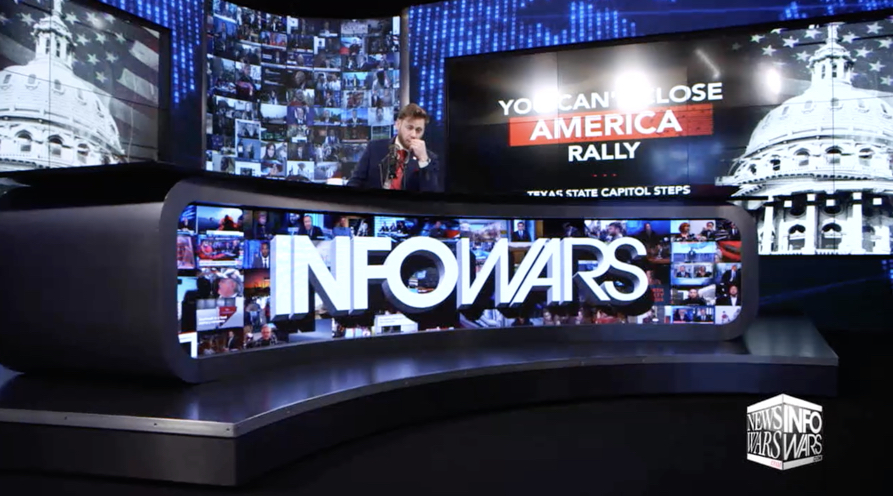 Infowars host Owen Shroyer is calling on supporters to gather on the steps of the Texas Capitol in Austin on April 18 for a rally he is hosting called “You Can’t Close America.” Through at least April 30, Texans are under an executive order issued by Republican Gov. Greg Abbott which “requires all Texans to stay at home except to provide essential services or do essential things like going to the grocery store” because of the novel coronavirus outbreak.

Taking cues from the president himself, Shroyer and other Trump supporters have been increasingly agitating for social distancing restrictions to end in recent weeks. The largest calls to end coronavirus-related restrictions so far have been the so-called “Operation Gridlock,” where protesters drove their cars around the Michigan Capitol on April 15, causing a traffic jam, and at the Ohio statehouse, where protesters gathered outside the doors to the building and chanted “reopen Ohio” during Gov. Mike DeWine’s April 13 coronavirus briefing. Public health experts have said ending restrictions prematurely could produce disastrous consequences.

On April 8, Right Wing Watch’s Jared Holt reported that Shroyer floated a message urging Infowars supporters to defy social distancing guidelines if they weren't lifted in the near future, saying, “Re-open the economy next week, re-open everything next week, or I really might come on here just start calling for revolting against this.” Shroyer, a far-right conspiracy theorist who is being sued for defamation over his claims about the Sandy Hook mass shooting and who was arrested in December for disrupting a House impeachment hearing, announced his rally while guest-hosting the April 14 broadcast of The Alex Jones Show.

In his announcement, Shroyer called on supporters to gather in person at the steps of the Texas Capitol in Austin on April 18 at 12 p.m. CST for what he termed the “You Can’t Close America Rally.” Shroyer said, “It’s time for citizens to stand up and take our country back, just like President Trump promised during his inaugural address.” The Infowars host also claimed that he wasn’t afraid of being arrested or catching coronavirus at the event, asking, “Are we in martial law right now? Because we’re acting like it.”

He went on to make a number of outlandish and inflammatory claims about coronavirus, calling reports of large numbers of people dying of COVID-19 in the U.S. “Chinese Communist propaganda” and claiming that coronavirus is a distraction orchestrated by “the dirty Democrats and the Chinese communist agents and the deep state” so that they can “scrub this turd that is Barack Obama,” who Shroyer said should be arrested by Trump for treason.

Shroyer also claimed that Twitter is “an anti-American agency” because the social media platform is supposedly facilitating inflated statistics of coronavirus deaths. Using his verified account, Shroyer is promoting his April 18 rally on Twitter:

Infowars is also promoting the rally through its banned.video streaming platform and BitChute account.

Later on April 14, while hosting his regular Infowars program War Room, Shroyer said that he was inspired to hold his event because he “noticed a trend of protests to reopen the government in Michigan and other places, people coming out with signs, going to the state capitol, governor’s mansions, etcetera.” He also said that he would flout an Austin order that requires people over the age of 10 to wear a mask in public.

Shroyer’s rally is not the only way Infowars is endangering public health during the pandemic. Infowars head Alex Jones has repeatedly claimed without evidence that the supplements he sells through his Infowars Store offer benefits against coronavirus, garnering scrutiny from the New York Attorney General’s Office, the Food and Drug Administration, and the House Oversight Committee.