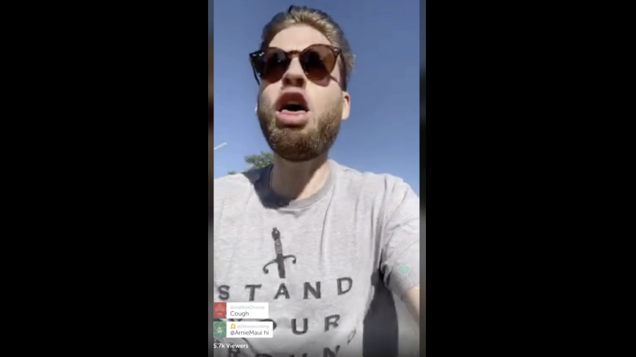 Update 1 (4/16/20): Following the publication of this post, Twitter suspended Owen Shroyer from the platform. His account with Periscope, where he made similar claims about coronavirus and promoted his rally at the Texas Capitol, is still active as of this update.

Infowars host Owen Shroyer -- the organizer of an April 18 in-person rally at the state Capitol in Austin, Texas, to protest coronavirus-related restrictions -- is using Twitter and the company’s streaming platform Periscope to promote the event. While Twitter banned accounts for Infowars and its head Alex Jones in 2018, the ban does not apply to other Infowars personalities.

On April 14, Shroyer announced that he would be hosting a rally he is terming “You Can’t Close America” despite a stay-at-home order in Texas that “requires all Texans to stay at home except to provide essential services or do essential things like going to the grocery store." Shroyer has said that his in-person gathering is inspired by similar protests that have occurred in Michigan and elsewhere and has claimed that reports of large numbers of COVID-19 deaths in the U.S. are actually “Chinese Communist propaganda.”

While Infowars and its personalities have been deplatformed to various extents on most major social media outlets, Shroyer remains in good standing with Twitter, which has verified his account.

Shroyer also has a verified Periscope account and filmed an hour-long livestream on April 15 in which he drove around Austin on a scooter. During his trip, Shroyer drove to several medical facilities in order to promote the right-wing conspiracy theory that coronavirus-related hospital infrastructure issues are a hoax.

After some of the 5,700 viewers of his Periscope broadcast egged on Shroyer to start coughing, he did so, in one instance apparently in the vicinity of law enforcement officers. Shroyer said, “Oh, it’s the Austin Community College police right here,” and then coughed on purpose.

Shroyer also visited the Texas Capitol to promote his rally, which is referenced in the title of his livestream. Shroyer gave the date and time for the event and added that he hoped Alex Jones will attend:

On March 18, Twitter announced a policy that disallowed tweets that “could place people at a higher risk of transmitting COVID-19.”