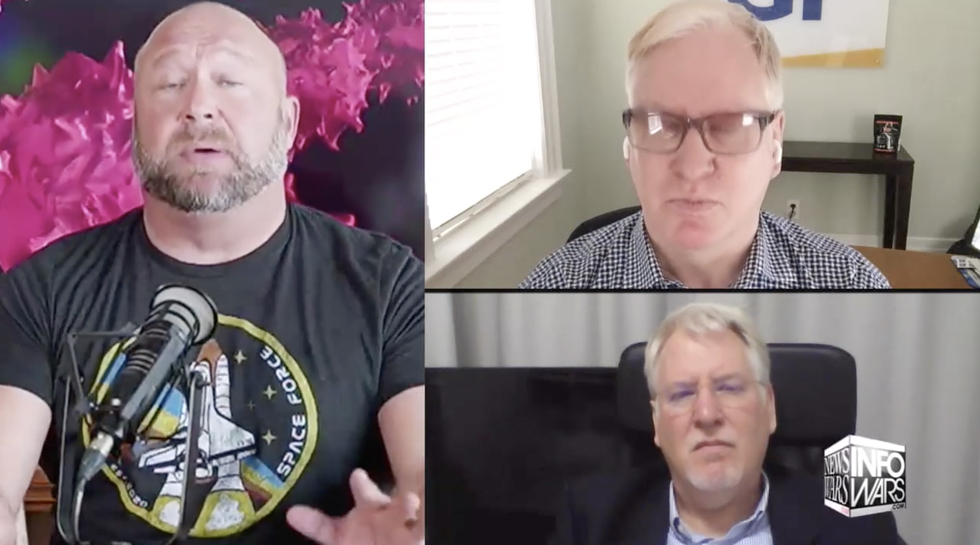 Twin brothers Jim and Joe Hoft joined far-right conspiracy theory program The Alex Jones Show to downplay the danger of the spread of coronavirus in the U.S. and claim that the crisis is being manufactured by “the deep state” to make President Donald Trump look bad.

Even though the Hoft brothers are disreputable conspiracy theorists, major right-wing media figures Rush Limbaugh and Sean Hannity have in recent weeks cited them in pushing false coronavirus claims.

During the March 17 edition of The Alex Jones Show, Jim Hoft -- the head of conservative media outlet The Gateway Pundit -- said that he and his brother are “both big fans of Infowars” before claiming that World Health Organization Director-General Tedros Adhanom Ghebreyesus (who Hoft called “that guy from Ethiopia”) has been overstating the mortality rate of COVID-19.

Jim Hoft said that “we’re looking at something that’s been contrived at this point” and claimed “at this point we are not seeing anything that should have brought this country to its knees like it has” before blaming the media for having “created this crisis.”

Hoft went on to praise Trump’s response to coronavirus, saying that he should not be blamed for any coronavirus deaths but that “in the next couple days, maybe a week, maybe two, he needs to look at the real numbers and then re-decide, and make another decision what’s best for the country.” Hoft also said that the coronavirus crisis “is the third time that the deep state is trying to take [Trump] out.”

During a later segment, Alex Jones called the coronavirus crisis “as synthetic as plastic fruit.” Jones has been pushing the conspiracy theory that coronavirus is a man-made biological weapon that was created by globalists and other nefarious actors in an attempt to depopulate the planet.

Jones then asked Jim Hoft how he thinks things would be going if Hillary Clinton would have won the presidency given his belief that “they were still going to play this card.” Hoft said that if Clinton were president, “Hillary would have had open borders. We would have had thousands and thousands of people flooding in.”

Joe Hoft, a writer for The Gateway Pundit and a business executive at Reinsurance Group of America who works out of Hong Kong, backed up his brother’s commentary, saying that the coronavirus outbreak “reminds me more of the Mueller investigation than anything else” and that “this is a sham to put President Trump in a very difficult spot again.”

On March 11, Fox News host Sean Hannity cited Hoft’s Gateway Pundit website on his radio show to claim that it “may be true” that the “deep state” is using the coronavirus outbreak to manipulate financial markets, suppress dissent, and push mandated medicines. In February, radio host Rush Limbaugh cited a coronavirus-related conspiracy theory promoted by Joe Hoft about a Centers for Disease Control and Prevention official.

The Hoft brothers’ appearance on The Alex Jones Show also highlights the wildly inconsistent messaging coming out of the conspiracy theory program. Shortly before Jones hosted the Hofts to downplay coronavirus in the U.S. in order to protect Trump, Jones alleged that the coronavirus crisis is part of a plot hatched by globalists and aliens that will eventually kill almost all of humanity: