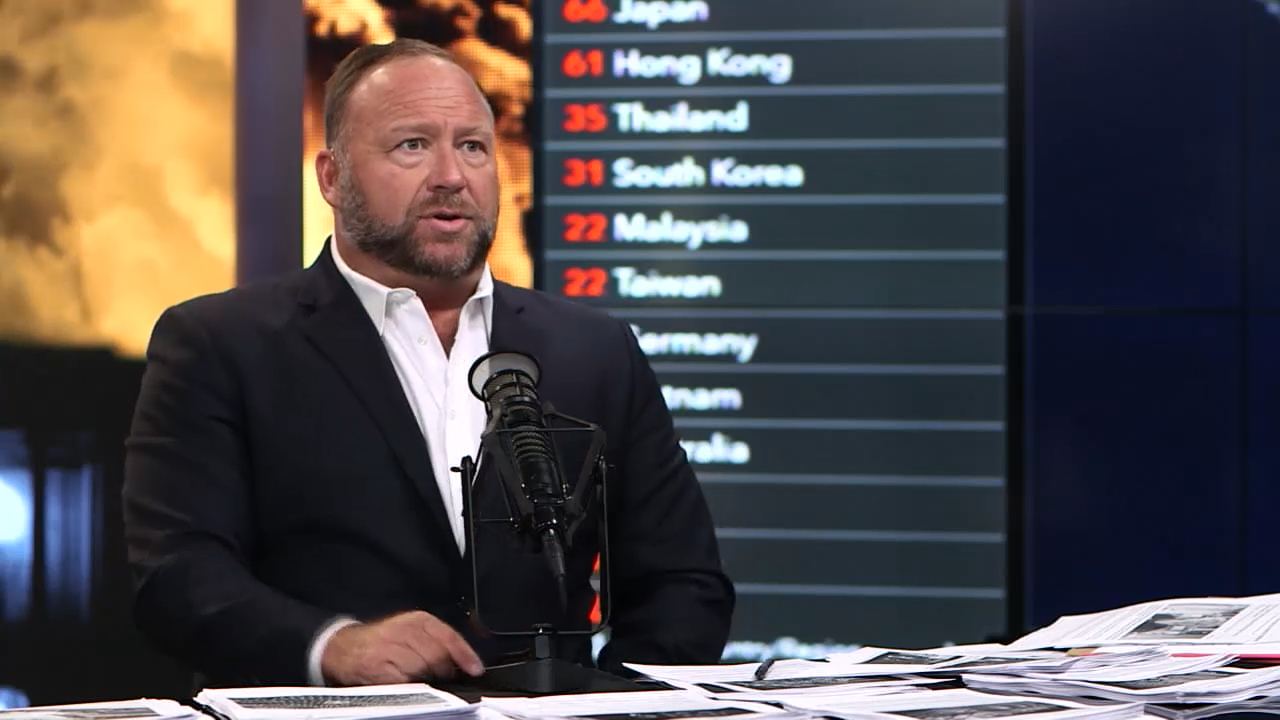 Far-right conspiracy theory outlet Infowars has been aggressively hawking bulk food packages at inflated prices while spreading wild conspiracy theories about the coronavirus outbreak. Since December, the price of bulk food at Infowars’ online store has more than doubled with the biggest package costing nearly $3,000.

On December 31, China announced an outbreak of COVID-19, a novel coronavirus that started in Wuhan City, with the first known case dating back to December 1. The disease has since spread beyond China and is currently present in 53 countries, including the United States, and has stricken more than 83,000 people.

As the virus continues to spread, and a pandemic becomes more likely, Alex Jones is using Infowars to panic his viewers while also trying to profit from them.

Infowars operates InfowarsStore.com, which sells dietary supplements, apparel, firearm accessories, and bulk food. The page for bulk food has been using the coronavirus outbreak as a sales hook. A video ad has appeared at times on the store’s “emergency survival foods” page with the title, “EMERGENCY SURVIVAL FOODS: Coronavirus Clearance Sale.” In the video, Jones urges viewers to buy Infowars bulk food packages, claiming that other sellers are sold out, but that Infowars can ship within seven to 10 days. (When accessed on February 28, the Infowars Store now says “Shipping WILL be delayed on many orders, potentially 6-8 weeks or more in rare cases.”)

In the advertisement, Jones explicitly references coronavirus, saying, “I noticed there were reports that food prices in general were going to be going up because of the crisis in China and surrounding areas and with how deadly this coronavirus is” and claims, “This is the lowest price you’re going to find anywhere, even when it’s at its regular price.” He also suggests that buyers should act before it is too late, saying, “You can feel it in your bones, big stuff is coming down, whether it’s coronavirus or something else, now is the time to get prepared and I suggest folks get their storable food at InfowarsStore.com while you still can.”

Jones urges buyers to consider large purchases, saying, “I personally have ordered more storable food just last week because I have to be able to take care of not just myself but my neighbors, because believe me, hungry starving neighbors are not a good thing to have and so it’s simple: You better hide your food or you better have extra.” During the video, Infowars packages with prices up to $2,987.00 are shown.

Since December, the Infowars store has more than doubled the price of its largest package, “Infowars Life Select: 1 Year.” On December 21, the package was being sold for $1443.50. The price increased to $1,594 by January 23. By January 30, the price had increased to $2,987, and the page was displaying the “EMERGENCY SURVIVAL FOODS: Coronavirus Clearance Sale” video.

Coronavirus has been a near-constant topic of discussion on Infowars' various broadcasts. According to a search of Infowars’ online streaming platform Banned.video, at least 145 videos have been posted since January 22 that reference the outbreak in their titles. Of these, 127 were published after Infowars released its “EMERGENCY SURVIVAL FOODS: Coronavirus Clearance Sale” ad for bulk food on January 27.

Sales pitches that appear in Infowars content are aggressive. They play on fears of food shortages, emphasize the need to make immediate and large orders, and fearmonger about the prospect of societal collapse and cannibalism. Among some of the on-air pitches:

Infowars is seeking to instill fear in its audience

And the videos that are paired with this ad appear designed to maximize fear about the coronavirus outbreak. Here are some of the more sensational titles of Infowars videos related to coronavirus:

The conspiracy theories Infowars is pushing to sell its bulk food

How Alex Jones is taking advantage of his audience

People are right to be concerned about coronavirus, but Jones and Infowars are attempting to profit from panic that they create. Writing in Scientific American, Zeynep Tufekci argued that the way to stop the spread of COVID-19 coronavirus is through practicing “community-wide isolation” where outbreaks are present and taking actions -- including getting a flu shot, regularly washing your hands, using alcohol-based hand sanitizer, not touching your face, and, if in a position of authority, allowing workers to work from home or make up the time later. Such steps, according to Tufekci, reduce the risk for people to get infected -- by coronavirus or other diseases like the common flu -- and will lower the burden on the healthcare system, so it can better treat vulnerable populations such as the elderly.

In her article, Tufekci criticizes tactics like the ones used by Jones, writing, “There is no shortage of snake oil sellers who hope stoking such fears will make people buy more supplies: years’ worth of ready-to-eat meals, bunker materials and a lot more stuff in various shades of camo.” Instead, Tufekci says the way to prepare for the possibility of self-isolation is to “buy two or three weeks’ worth of shelf-stable food that you would eat anyway, and be done; this could include canned food like beans and vegetables, pasta, rice, cereals or oats, oils/fats, nuts and dried fruits” and to have potable water on hand.