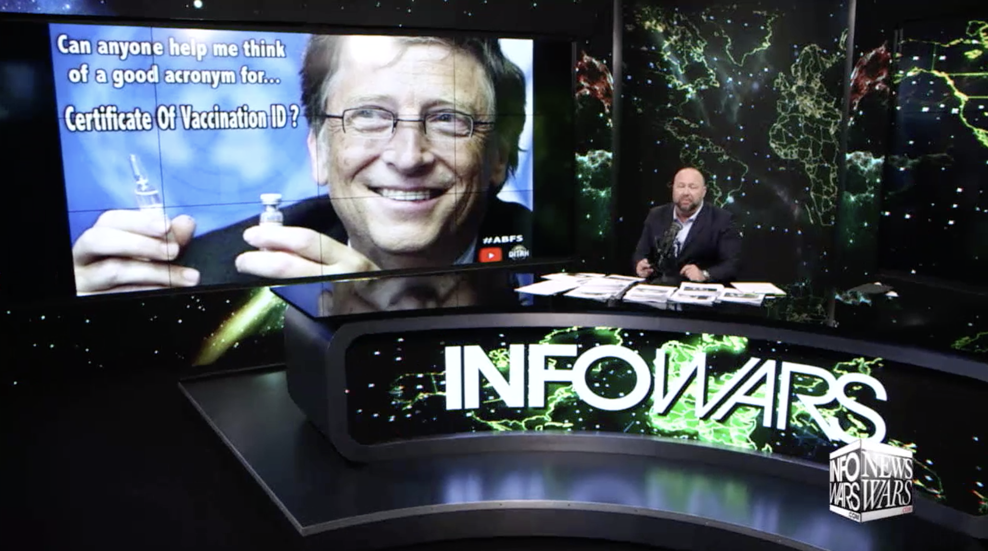 Far-right conspiracy theorist Alex Jones has placed Microsoft cofounder and philanthropist Bill Gates at the center of a coronavirus-related globalist depopulation plot that Jones has suggested could be staved off if Gates is executed.

Gates is one of the most prominent public figures targeted by right-wing conspiracy theorists throughout the novel coronavirus pandemic. Over the last several decades, Gates has had major involvement in public health efforts, notably in the field of vaccinations. He has also been one of the more prominent voices warning about the possibility of a major global pandemic. More recently, Gates has pledged significant funding to the effort to develop a vaccine for the novel coronavirus.

Jones, a leading figure in the anti-vaccine movement, has seized on Gates’ efforts in order to push a conspiratorial message.

Jones’ overarching conspiracy theory about Gates has many threads, but this is the broad contour: Gates, acting as the public face of a plot by globalist elites to depopulate the earth, created and released the novel coronavirus, spurring efforts to create a vaccine that will then be used by globalists to sterilize or kill the most of the earth’s population.

Jones began targeting Gates with coronavirus-related conspiracy theories as early January, when there were few reported coronavirus cases in the U.S. In a video posted January 27 to Infowars’ streaming platform Banned.video, Jones called Gates “the chief science officer of the private corporate world government” who was helping globalists “carry out and execute this covert sterilization depopulation plan.” Jones based his claims on Gates' participation in “The Next Pandemic,” a November 2019 episode of the Netflix series Explained, which Jones claimed showed that he and his wife, Melinda Gates, are “trying to terrify you into accepting forced inoculation in the name of protecting your health, when in truth, vaccines have been proven to lower immunity in most cases, to be filled with cancer viruses and other pathogens, and to be a scourge from the technocrats, from the eugenicists in the last 60 to 70 years.”

Jones has subsequently built on his Gates conspiracy theory. Here are some of his specific claims from recent weeks:

At its video platform banned.video, Infowars has posted numerous videos from Jones and other Infowars personalities conspiratorially attacking Gates. Representative examples include:

Jones uses violent rhetoric when talking about Gates and other “globalists”

Jones has woven in violent rhetoric to his coronavirus conspiracy theories about Gates and others. During his April 13 broadcast, Jones said, “If we’re this selfish of a society, then fine, just burn it all down. But I want Bill Gates and others to walk to the plank first.”

He went on to ask, “What do you think Bill Gates does?” before suggesting that “collaborators” in the coronavirus outbreak should be rounded up and killed in the same way, Jones claimed, that U.S. Marines rounded up 10-15,000 Nazi collaborators in 1941 and extrajudicially killed them:

In a disturbing video posted April 28 to banned.video, Jones claimed that there is “about a 60% chance we go into total collapse,” describing a mass starvation scenario that he blamed on Bill and Melinda Gates and others. Jones said he is “literally looking at my neighbors now and going, I’m ready to hang them up and gut them and skin them and chop them up and you know what, I’m ready. My daughters aren’t starving to death.” Jones then said, “That’s why I want the globalists to know I will eat your ass first. We’re going to dig you out of those bunkers, we’re going to dig you out of those holes. Let me tell you something right now, I swear to god if it’s the last thing I do, I’ll get my hands around your throat.”

Beyond attacking Gates in broadcasts, Jones has taken his attacks and conspiracy theories to the public forum. Infowars has been hosting rallies in Texas against public health orders, and at an April 25 protest, Jones led the crowd in chants of “arrest Bill Gates”:

Infowars has also encouraged people to protest outside of the Bill and Melinda Gates Foundation headquarters in Seattle, Washington. When reports recently emerged that email addresses for people who work at the Gates Foundation were hacked, Infowars host Owen Shroyer celebrated, saying that the hack was like “WikiLeaks DNC dumps 2.0, but like bigger” and said he hoped that it would lead to a criminal investigation into the Gates Foundation, Barack Obama, and others.

Jones is taking credit for social media accounts associated with Gates being flooded with conspiracy theories and for members of the public believing that Gates is involved in the coronavirus outbreak. During his April 24 broadcast, Jones claimed that his “life is in danger for doing this” because of what he has said about Gates, “but now Bill Gates goes everywhere people yell at him, they call him a mass murderer, they get in his face, every comment is now digging into his history.” Jones said that his role in talking about Gates and others was so “they go down with the ship” during a future mass bio-attack launched by globalists. During his April 23 broadcast, Jones related how he says people often approach him in public now and say things like, “We love you, Alex, and Bill Gates is going to burn in hell,” “F Bill Gates, we’re winning, Alex, keep it up,” and “Bill Gates is the enemy, you are our champion, destroy him.”

Jones is pushing the White House to attack Gates

Jones often claims to be in close communication with White House officials and sometimes President Donald Trump himself, who appeared on Jones’ show in 2015 to praise the Infowars host’s “amazing” reputation.

Jones has now claimed that he is passing information about Gates to the White House. In a video posted on April 27 to Infowars’ streaming platform, Jones said Trump is beginning to get “up to speed” on Gates and is “beginning to announce to the enemy, their main organizational system,” which Jones said includes Gates, the World Health Organization, and eugenicists. Jones said that he “personally talked to some very high-level people and I told them all of this just days ago,” adding, “Now I realize my main mission, I didn’t understand Trump didn’t have any advisers telling him this. I never knew my real power was not even talking to the general public.”