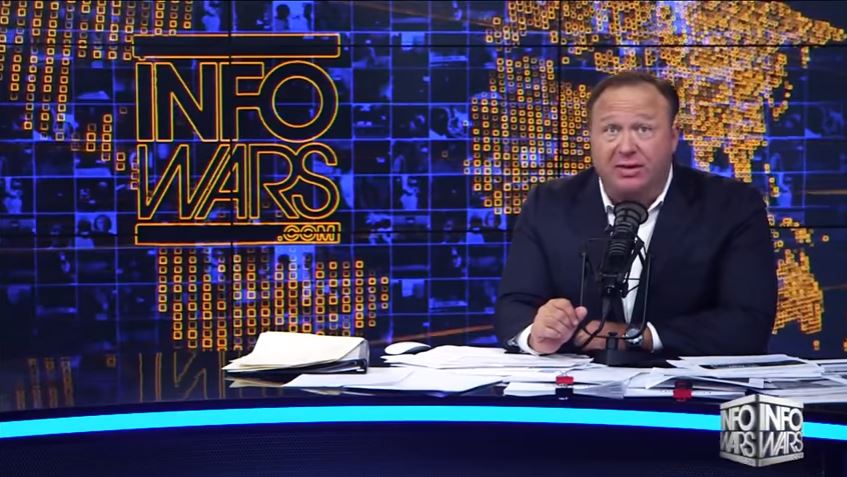 Conspiracy theorist Alex Jones called on Neil Heslin, who lost his son during the Sandy Hook Elementary School massacre, to clarify whether he actually held his son’s body and observed a bullet hole in his head.

Jones made the demand during the July 20 broadcast of The Alex Jones Show while complaining that he has come under attack for questioning official accounts of the December 2012 shooting, which claimed 26 lives.

The statement that Jones wants Heslin to clarify was made during Megyn Kelly’s interview with Heslin as part of her June 18 profile of Jones for her NBC show Sunday Night with Megyn Kelly. Heslin rebutted conspiracy theories surrounding the shooting, telling Kelly, “I lost my son. I buried my son. I held my son with a bullet hole through his head.”

Heslin’s son, Jesse Lewis, saved several classmates’ lives during the shooting by telling them to run when the gunman’s weapon jammed, according to investigators.

During the July 20 broadcast, Jones played a June video report from Infowars reporter Owen Shroyer that claimed it was impossible for Heslin to have held his son.

In the report, Shroyer said of Heslin, “The statement he made, fact-checkers on this have said cannot be accurate. He’s claiming that he held his son and saw the bullet hole in his head. That is his claim. Now according to a timeline of events and a coroner’s testimony, that is not possible.”

As evidence of his claims, Shroyer played a video clip from shortly after the shooting where a coroner explained to press that the victims were identified by parents with photographs rather than in person. Shroyer ended his report by saying, “Will there be a clarification from Heslin or Megyn Kelly? I wouldn’t hold your breath. So now they’re fueling the conspiracy theory claims.”

Shroyer’s report is easily debunked; according to news accounts, the bodies of the victims were released from the coroner and taken to funeral homes. Funerals where the children’s bodies were in the custody of their parents were widely reported on by the press.

Jones vacillated on whether Heslin was lying about seeing his son’s body and called on him to “clarify” what happened during his July 20 broadcast.

After showing the segment, Jones said he told Shroyer, “I could never find out. The stuff I found was they never let them see their bodies. That’s kind of what’s weird about this. But maybe they did. So I’m sure it’s all real. But for some reason they don’t want you to see [Shroyer’s segment].”

Speaking more broadly about the shooting, Jones said, “Can I prove that New Haven (sic) didn’t happen? No. So I’ve said, for years, we’ve had debates about it, that I don’t know. But you can’t blame people for asking.”

Jones is lying. In the years following the shooting, he definitively called the tragedy a hoax. For example, in December 2014, Jones said, “It took me about a year with Sandy Hook to come to grips with the fact that the whole thing was fake.”

After Jones’ profile was raised by his close association with President Donald Trump, he was heavily criticized for these claims and has subsequently tried to sanitize them by saying he was merely asking questions or debating whether the shooting happened. The bottom line is that even this type of commentary casts doubt on the shooting and fuels conspiracy theories that are used to harass the victims’ family members.