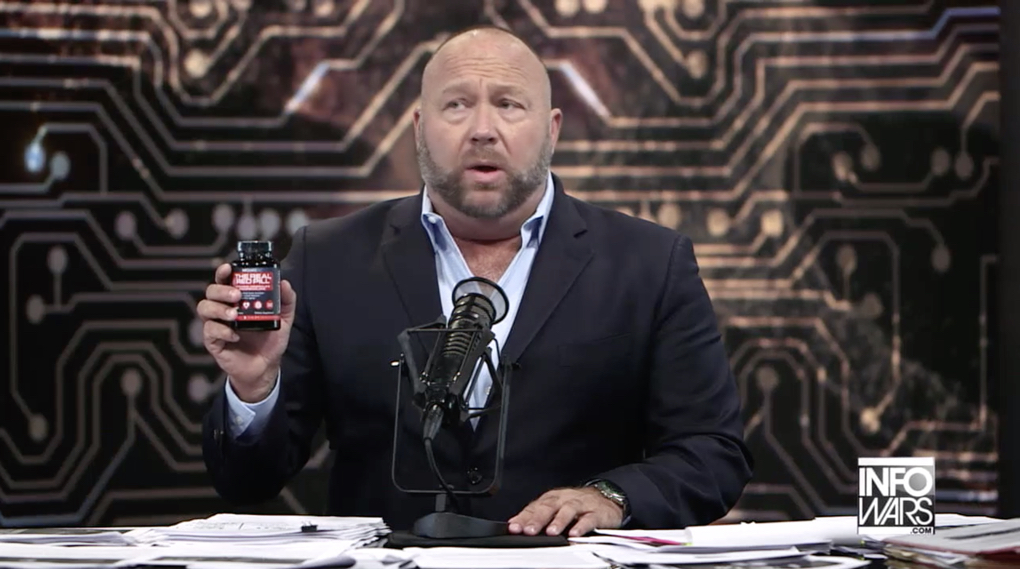 The Food and Drug Administration has sent a warning letter to far-right conspiracy theorist Alex Jones that instructs him to immediately stop selling products through his Infowars outlet that he has marketed as coronavirus preventatives.

The Daily Beast reported on the development on April 9, noting that Jones risks legal action if he does not comply:

The FDA sent a letter to Jones and his website InfoWars on Thursday demanding that he stop telling the viewers of his popular internet broadcasts that they can ward off the virus with colloidal silver products sold on his website. Those videos, the FDA wrote, “misleadingly represent them as safe and/or effective for the treatment or prevention of COVID-19.”

A failure to remove those claims, the agency added, “may result in legal action seeking a Federal District Court injunction and an order may require that you pay back money to consumers.”

According to the warning letter released by the FDA, Jones’ marketing of his products has violated several federal laws.

As Media Matters reported, Jones first began connecting the novel coronavirus outbreak to the products that he sells at his Infowars Store during broadcasts in February when he urged listeners to buy bulk storable food packages from the website. The pitches came shortly after the Infowars Store had doubled the price of its bulk food packages.

Then, Jones turned to pitching various supplements he sells as coronavirus preventatives. During a March 7 broadcast, Jones pitched a supplement called DNA Force Plus as well as Infowars Store colloidal silver products as a “stopgap” against the coronavirus. Most infamously, Jones claimed during a March 10 broadcast that a colloidal silver toothpaste that he sells “kills the whole SARS-corona family at point blank range.” The FDA referenced that claim in its letter as one of Jones’ violations of federal law.

Following his toothpaste claim, Jones was sent a cease-and-desist order by New York Attorney General Letitia James that ordered him to stop “selling and marketing products as a treatment or cure for the coronavirus.” Since the cease-and-desist letter was sent, Jones has become more creative in his product pitches, using wordplay and ambiguous language to continue to suggest that the products he sells offer some benefit against the coronavirus.