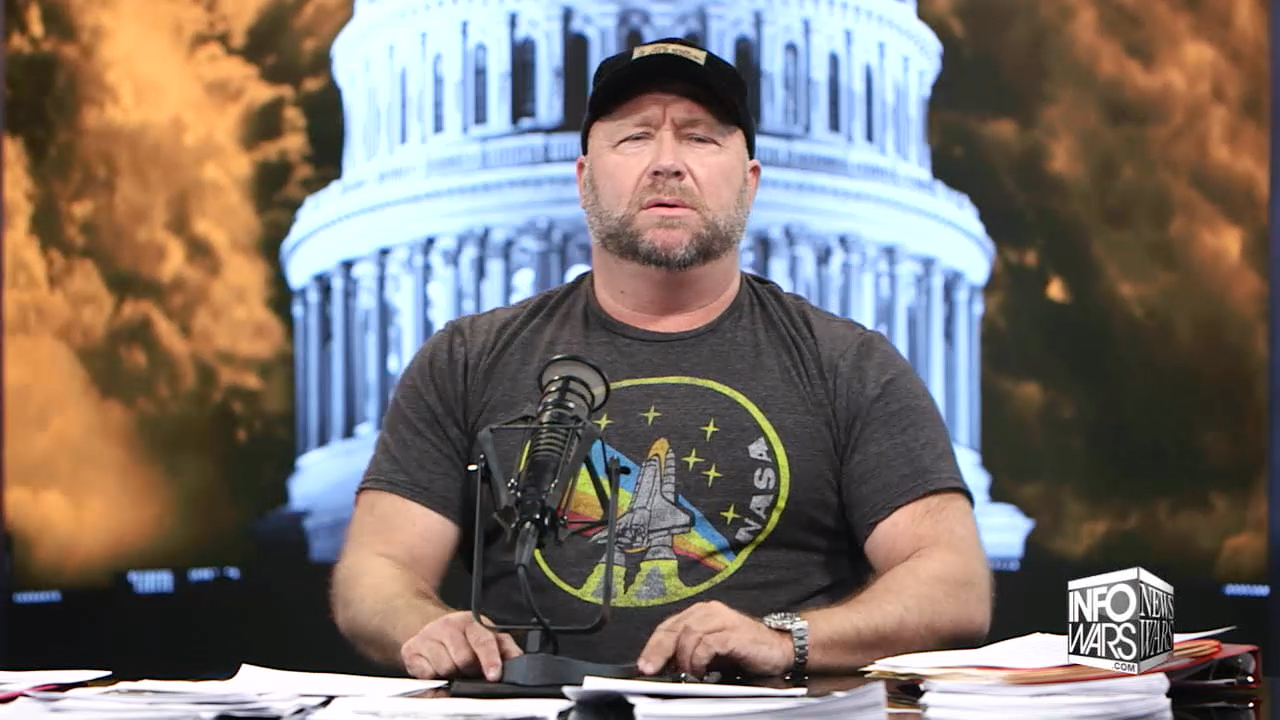 Far-right conspiracy theorist Alex Jones claimed during a broadcast that a nanosilver toothpaste he sells kills coronavirus and that his claim is backed up by the Pentagon and the Department of Homeland Security. According to the Centers for Disease Control and Prevention, “There is no specific antiviral treatment recommended for COVID-19.”

The Food and Drug Administration, the Federal Trade Commission, and two state attorneys general have begun taking action against individuals who have made similar claims in selling coronavirus-related products.

Following the outbreak of a novel strain of coronavirus in December, Jones has used his media outlet Infowars to promote products from the Infowars online store to his supporters, including pushing conspiracy theories to sell bulk food packages at inflated prices and claiming that the supplements he sells will stop the spread of coronavirus.

Jones made the toothpaste claim during the March 10 broadcast of The Alex Jones Show, which streams online and is carried by radio stations throughout the country. He said, “I’m just going to tell you that for just your daily life and your gums and your teeth for regular viruses and bacteria, the patented nanosilver we have, the Pentagon has come out and documented and Homeland Security has said this stuff kills the whole SARS-corona family at point blank range.” Jones went on to claim that his toothpaste “kills every virus” and that “the Pentagon uses the product we have.”

Jones was referencing the “Superblue Fluoride-Free Toothpaste” he sells. The product page claims it is “a revolutionary new toothpaste blend with iodine and Nano Silver designed to deliver a powerful clean while supporting good oral health and fresh breath.” Contrary to Jones’ suggestion on air that the toothpaste is a coronavirus preventative measure, the product page includes a disclaimer that reads: “These statements have not been evaluated by the Food and Drug Administration. This product is not intended to diagnose, treat, cure or prevent any disease.” During his broadcast, Jones urged listeners to buy the “Superblue” toothpaste, as well as a whitening toothpaste, saying, “Those are both excellent, they are at InfowarsStore.com, they’re still discounted despite all the hell breaking loose.”

Despite Jones’ claims, nanosilver -- which is another name for colloidal silver -- is not broadly accepted as an antiviral cure-all. As a 2013 survey of the use of nanosilver in the peer-reviewed journal Environmental Health Perspectives explained, “Despite its widespread use, nanosilver remains a fairly poorly understood material to both regulators and scientists. Consensus remains elusive on subjects as essential as how it behaves in the human body and the environment, and the extent to which its use may contribute to bacterial resistance.” A 2018 article in the peer-reviewed Molecules journal specifically looked at claims about nanosilver’s antiviral potential. The article concluded, “The understanding of antiviral mechanism of [silver nanoparticles] is still in its early stages; hence, further studies are needed to explore the mechanisms of action of [silver nanoparticles], which may render the conceivable antiviral development of [silver nanoparticles] to fill the vital niche of a wide range of antiviral agents.” In terms of the use of nanosilver in supposed health products, the Mayo Clinic warns, “Colloidal silver isn't considered safe or effective for any of the health claims manufacturers make. Silver has no known purpose in the body.”

The Food and Drug Administration and the Federal Trade Commission recently sent warning letters to several companies “accusing them of marketing illegal, unapproved drugs and making deceptive or scientifically unsupported claims” in coronavirus-related product pitches, The Washington Post reported. According to an FDA and FTC press release, “The products cited in these warning letters are teas, essential oils, tinctures and colloidal silver.”

Additionally, the Missouri Attorney General’s Office is suing televangelist Jim Bakker for marketing a colloidal silver product he sells as a preventive measure to coronavirus. The lawsuit, which is asking a court to enjoin Bakker from selling the product, alleges that he is “falsely promising to consumers that Silver Solution can cure, eliminate, kill or deactivate coronavirus and/or boost elderly consumers’ immune systems when there is, in fact, no vaccine, potion, pill, potion or other product available to treat or cure coronavirus disease 2019.”

During a March 7 video that was posted to Infowars’ video streaming platform, Jones claimed that using the toothpaste, as well as a supplement he sells for nearly $90 called DNA Force Plus, was the “answer” to the spread of coronavirus.

After pitching toothpaste as a coronavirus killer during his March 10 broadcast, Jones urged viewers to also buy bulk food from the Infowars Store, warning the prices are set to increase soon. Media Matters previously documented that in recent weeks, Infowars Store more than doubled the price of the bulk food packages it sells, with the most expensive package now costing nearly $3,000.

Jones made the claim about his toothpaste during the same broadcast that he announced that he had been arrested the previous evening under suspicion of driving while intoxicated. According to police documents obtained by The Daily Beast, Jones’ wife called the police to report a “family disturbance” that was “only verbal but earlier in the day it ‘was physical.’” The police had located Jones and pulled him over for speeding, discovering a “strong odor of alcohol coming from his person.”

Update (3/12/20): Reached for comment on Jones’ claims, a spokesperson from the U.S. Food and Drug Administration sent Media Matters a statement that said the agency “is aware of claims made by Alex Jones regarding supplements claiming to cure COVID-19” and that “generally, the FDA does not discuss compliance or enforcement matters, except with the party involved”:

The FDA is aware of claims made by Alex Jones regarding supplements claiming to cure COVID-19. Generally, the FDA does not discuss compliance or enforcement matters, except with the party involved.

To date the FDA has issued warning letters to seven companies for selling fraudulent COVID-19 products and the agency intend to take further action – including but not limited to WLs – as appropriate. The FDA and FTC will continue to monitor social media, online marketplaces and incoming complaints to help ensure that the companies do not continue to sell fraudulent products that claim to prevent, treat, mitigate, diagnose or cure coronavirus disease 2019 (COVID-19).

Update (3/12/20): Bloomberg News reported that New York Attorney General Letitia James has initiated an investigation into Jones’ claim that his nanosilver toothpaste “kills the whole SARS-corona family at point-blank range.” James subsequently called on Jones to “immediately cease and desist selling and marketing products as a treatment or cure for the coronavirus.”