CCDF-USA has focused its efforts on Polk County, where it claimed that school libraries contained more than a dozen books that were “offensive,” included “undesirable, even unthinkable material,” and violated two Florida statutes against obscene and harmful material. Polk County’s school superintendent expressed concern that had these 16 books — which include titles by authors of color, books about LGBTQ issues and people, and stories about other minority groups — been left on shelves, school staff members could have been charged with a felony for “each instance that these books would be checked out.” The schools’ review of these books is underway, though CCDF-USA leaders have admitted that “the book issue has truly just been a strategic move on our part,” as well as suggested that they’re “going to start digging deeper.” The organization has focused on other issues as well, including raising complaints of voter fraud.

LGBTQ books have been a frequent target of extreme anti-LGBTQ groups and figures, who have a long history of fearmongering against LGBTQ people by pushing the myth that there is a connection between homosexuality and pedophilia and falsely claiming that LGBTQ people are trying to indoctrinate or groom children, among other claims. For example, groups such as ADF and Liberty Counsel have repeatedly threatened legal action against schools across the country if they introduce their students to I am Jazz, a children’s book about a transgender girl, and have advocated for bans on books that they have deemed inappropriate or extreme. Now, right-wing media and Republican officials in states like Florida are joining these groups in calling for such books — and some others related to race — to be banned from schools altogether.

Its Facebook page is now affiliated with a network of six Facebook groups focusing on counties in Florida and Texas, including:

Sometime in April, CCDF-USA leaders Jimmy Nelson and Steve Maxwell connected with Polk County parent Hannah Petersen after she started an anti-mask Facebook group called “No more mask mandates for children.” Petersen had publicly claimed that the group had attracted 3,000 members in the first 17 hours and that she was planning a rally for April 27 to protest the school district’s mask mandate.

Petersen announced CCDF-USA’s involvement to her Facebook group on April 14, writing that “we now have the backing of a very strong and powerful organization” and noting that even if Polk County officials “do lower the mandate” before the planned rally, her group would “continue to fight for ALL PARENTAL rights as a group.”

Petersen continued to plug CCDF-USA and the future of “this movement” in Polk County on her Facebook page, and Nelson and Maxwell introduced CCDF-USA at the April 27 rally. By August, Petersen changed the name of her Facebook group to “We the Patriots-Polk County” and told the members that most of her posts going forward would be related to CCDF-USA. She is currently CCDF-USA’s affiliate executive director overseeing Polk County.

CCDF-USA has promoted Florida’s “Parental Rights in Education” bill, also known as the “Don’t Say Gay” bill, since early March. A lot of the group's posts have insisted that this bill doesn’t actually say “don’t say gay,” even though it in effect prohibits or dramatically discourages discussions of gender identity and sexuality in some Florida classrooms.

According to The Ledger, CCDF-USA board members met with Polk County elections supervisor Lori Edwards in August and October and requested “permission to inspect the equipment and capture what it calls a ‘forensic audit,’ a copy of the program’s functions.”

Additionally, the group shared 22 affidavits with Edwards’ office that raise questions about voter registrations and provided a list of about 1,000 voters to be removed from the maintenance log due to inactivity. Edwards said her office reviewed the affidavits and the list from CCDF-USA and found no evidence of fraud.

In December, Edwards told the paper she was still in discussions with CCDF-USA, but made it clear that she was “not going to allow any inspections that could compromise Polk County’s election systems.”

In January, CCDF-USA hosted Phil Waldron on its podcast to talk about “election integrity.” Waldron is a retired U.S. Army colonel known most recently for reported involvement in developing a presentation outlining various ways to overturn the 2020 election; the document was shared among White House officials and Republican members of Congress ahead of the certification of election results on January 6, 2021.

During the interview with CCDF-USA, Waldron said that he first became concerned about election integrity issues “by mistake,” through doing research about the “Marxist, socialist movement to -- basically to overthrow our republic.” He went on to invoke baseless conspiracy theories that antifa, Black Lives Matter, and billionaire philanthropist George Soros worked to interfere with the 2020 election.

On March 14, CCDF-USA announced on Facebook that it will begin offering “monthly Poll Watcher training classes leading up to the August primaries.” 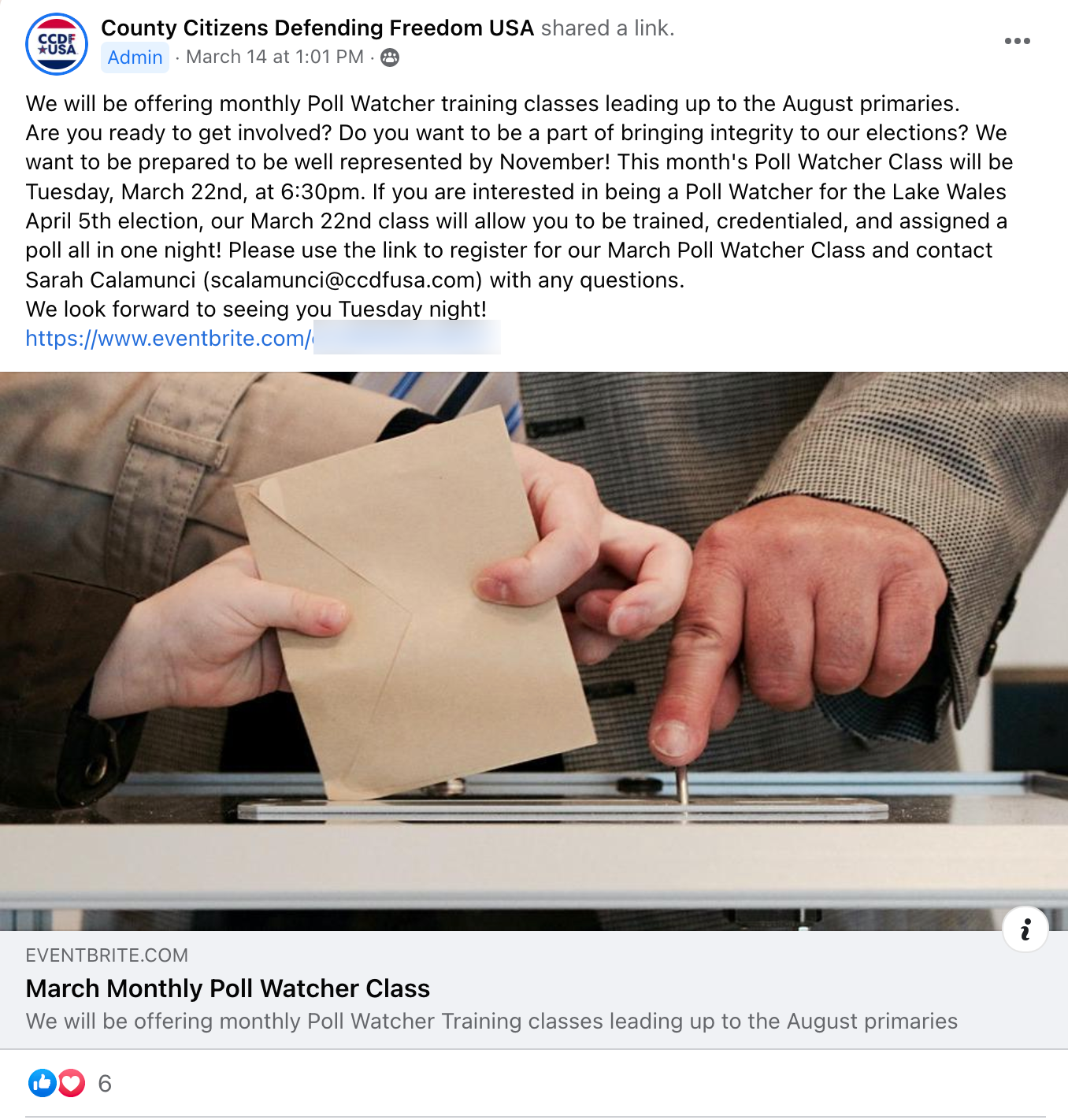 In May, Newsmax featured Hannah Petersen at least twice. In one appearance, Sean Petersen (her husband) and Jimmy Nelson also joined her.

Other right-wing outlets, such as LifeSiteNews and pro-Trump businessman Mike Lindell’s Frank Speech, have also hosted the group’s leaders – and that's just the start of CCDF-USA’s ties to fringe figures and extreme organizations.

The organization claims that it is focusing its efforts “locally,” but it also boasts ties to — and echoes the anti-LGBTQ rhetoric of — right-wing state and national groups. CCDF-USA lists ADF, Liberty Counsel, Turning Point USA, America’s Future, Florida Citizens Alliance, Patriot Academy, and Liberty Pastors as its “partners.”

Beyond listing ADF and Liberty Counsel — two extreme anti-LGBTQ groups with legal and political influence — as organization partners on its website, CCDF-USA has also repeatedly boasted about its ties to ADF.

Chairman Steve Maxwell mentioned CCDF-USA’s partnership with ADF at the April 27 rally, and also described the group’s involvement with ADF during a radio interview, noting that the group is talking to ADF every day for legal advice and even getting “legal advice on every issue that's coming up” with regard to the school boards.

Notably, an announcement for an event with Maxwell claimed that CCDF-USA and ADF, along with Turning Point USA’s Charlie Kirk and Florida Attorney General Ashley Moody, were “filing lawsuits against the county and the schools (and board members), fighting CRT, the trans curriculum, and more.”

On June 3, the group hosted ADF President and CEO Michael Farris as a guest speaker for its monthly meeting in Polk County.

CCDF-USA’s leaders have also repeatedly boasted of their ties to TPUSA, including at Petersen’s April 27 anti-mask mandate rally, where Chairman Steve Maxwell introduced his organization, specifically noted how the group will work with TPUSA, and even acknowledged members of TPUSA who attended the event.

CCDF-USA has also claimed to have 2,500 TPUSA campus chapters to support its research, and on July 8, the group hosted TPUSA co-founder Charlie Kirk as a virtual guest speaker for its monthly meeting in Polk County. That same month, Hannah Petersen posted a photo of herself, her husband Sean, and former White House press secretary and current Fox host Kayleigh McEnany at TPUSA’s “Student Action Summit,” where Petersen’s brother Seth Jahn was a featured speaker.

On May 20, CCDF-USA hosted Michael Flynn — disgraced former national security adviser to President Donald Trump — for a “sold out private tour” of its new headquarters in Polk County. Flynn now serves as the chairman of America’s Future, which CCDF-USA lists as a partner organization.

In August, Hannah Petersen interviewed Flynn about his views on the current “pulse of the nation” and his support for CCDF-USA. In the interview, Flynn falsely claimed that the European Union recently reported 25,000 people had died from taking the COVID-19 vaccine. He also warned that we are “being forced” to live in a “compliance society” because even though “the people of this country have lost total faith, total confidence, and total trust in many of the institutions of government,” the government “absolutely doesn't trust that you and I can make our own decisions.”

CCDF-USA also has ties to the Florida Citizens Alliance, a state organization that has reportedly been “working on having books removed from libraries for at least the past five years.”

Florida Citizens Alliance is a proponent of Florida’s “Don’t Say Gay” bill. Notably, the group has previously worked with Republican state Sen. Dennis Baxley, a sponsor of the bill, writing another education-related bill for him in 2019.

At a “Defend Freedom Event” on January 29, CCDF-USA’s Steve Maxwell appeared on stage with former Texas state Rep. Rick Green (R), who is also a founder of Patriot Academy — an initiative of Christian nationalist and extreme anti-LGBTQ organization WallBuilders. On March 3, CCDF-USA announced that it would be partnering with Green and Patriot Academy.

On CCDF-USA’s podcast, Green claimed to have started Patriot Academy after working as a Texas state legislator to fight against the “Marxism that was infiltrating the education system” and against government-mandated vaccines “20 years ago.” He went on to warn against the “left-wing San Francisco cabal in charge of the Democrat party” and potential civil war.

Patriot Academy’s Board of Advisors includes WallBuilders’ David Barton, Liberty Counsel’s Mat Staver, former Texas state Rep. Suzanna Hupp (R), and current Texas state Rep. Matt Krause (R). In fact, Krause used his position as the chairperson of the state House General Investigating Committee to launch an investigation last year, generating a list of about 800 books about racism, gender and sexuality and demanding that Texas schools report whether they have them on their shelves.

On March 3, CCDF-USA also announced it would be partnering with Liberty Pastors, writing in a Facebook post, “If you are or know of a pastor, we highly encourage you to engage in this network.”