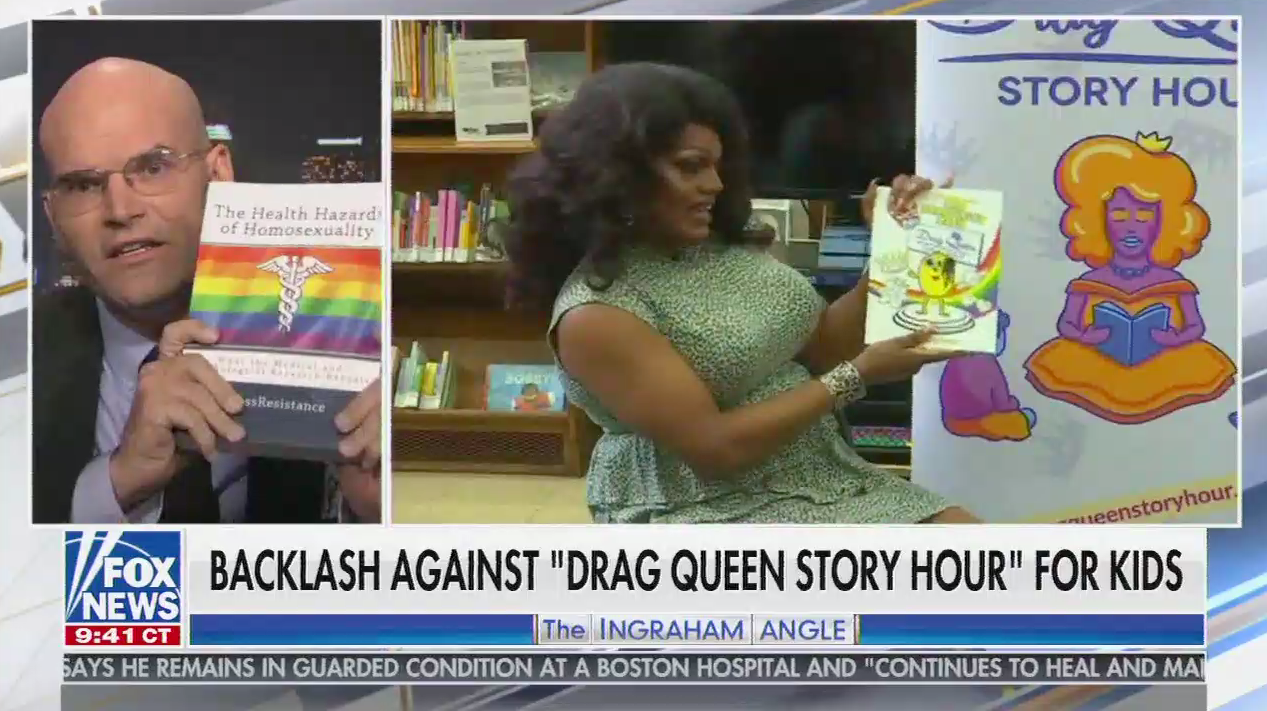 MassResistance’s leadership has compared LGBTQ people fighting for their rights to the Nazi propaganda machine, has said pro-LGBTQ policies are similar to Jim Crow laws, and has called homosexuality “repulsive.” The group’s book The Health Hazards of Homosexuality -- which has been “promoted and sold” at the Family Research Council’s Values Voter Summit -- claims homosexuality is “a mental health disorder,” is “really about sodomy,” and is “rooted in perverted practices which defy nature and bring ill health.” The group made news in 2017 when it kicked off its “Countering the LGBT Agenda” conference with an interpretive rainbow flag dance.

The Fox segment comes only a day after Ingraham dedicated an entire podcast episode to extreme anti-trans rhetoric. In it, the Catholic League’s Bill Donohue said “Drag Queen Story Hour” is an attempt to sexualize children, and Ingraham claimed that teaching kids about gender identity “is about lowering the age of consent.” Ingraham has a history of hosting anti-LGBTQ guests and allowing them to push anti-LGBTQ rhetoric and misinformation.

During the June 13 episode, Schaper called being LGBTQ “deviance” and “perverse and destructive lifestyles,” and flashed his group’s book at the end of the segment. From The Ingraham Angle:

ARTHUR SCHAPER (MASSRESISTANCE): My name is Arthur Schaper. I’m the organization director for MassResistance. We are the international pro-family group that makes the difference. We have had parents contacting us all over the country about these perverse programs. I mean the bottom line is this: You have adult homosexual men, adult entertainers, going into a public library reading to children. I mean, that alone should not only be setting off alarms, but people should be, you know, demanding this to be canceled even before it starts. OK, we're talking -- we’re not talking about diversity here. We’re talking about deviance. We’re talking about perverse and destructive lifestyles being animated or advertised to children as if it's normal. I mean, you can just look at the website itself --

LAURA INGRAHAM (HOST): Wait, wait. Hold on, Arthur. Are you saying that gay people can't read to kids ever? I mean, we're talking about a very specific issue with drag queens --

INGRAHAM: Right, that's what we're talking about here. So, try to keep it focused on that issue.