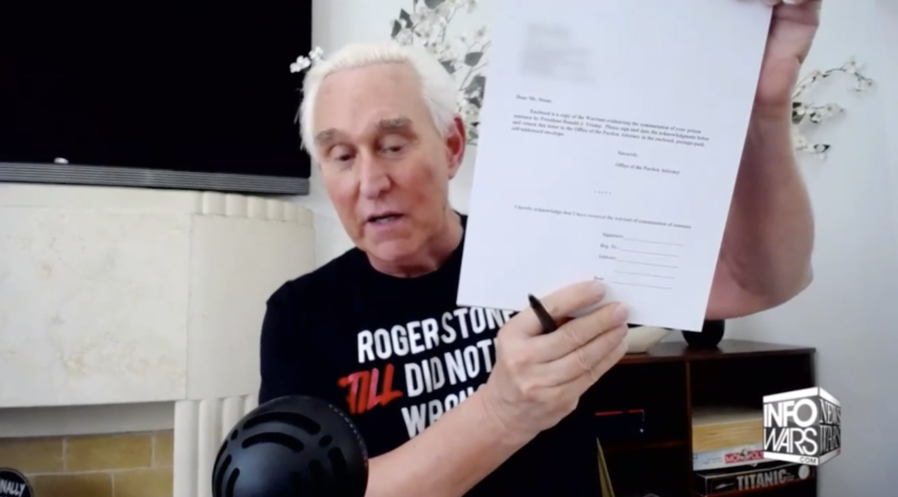 Roger Stone signed a document to accept the commutation of his prison sentence during a broadcast of far-right conspiracy theory program The Alex Jones Show. President Donald Trump commuted Stone’s sentence on July 10, days before he was scheduled to report to a federal prison to serve a 40-month sentence.

During his appearance, Stone also thanked several conservative media figures for cheerleading his commutation, which included Alex Jones (“who never abandoned me”), Fox News host Tucker Carlson (“the standout. … He pounded it at every turn of the case”), Fox News host Sean Hannity (“I believe he spoke to people in touch with the president, he may have even spoke to the president”), Fox News host Mark Levin, Rep. Matt Gaetz (R-FL), and Trump administration official Larry Kudlow.

While Stone will not have to go to prison, pay fines, or serve probation, he remains a convicted felon following his prosecution for lying to Congress, obstructing an official proceeding, and tampering with a witness. Prior to his commutation, Stone had been making right-wing media appearances urging Trump to grant him clemency so that he could be a more effective advocate for the president’s 2020 reelection campaign.

During the July 14 edition of The Alex Jones Show, Stone joined Infowars head Alex Jones, a conspiracy theorist perhaps most notorious for repeatedly claiming that the 2012 Sandy Hook Elementary School mass shooting was a hoax. During the episode, Stone said he was “going to do something very historic now, right here on the air on Infowars, I’m actually going to sign my acceptance of the commutation by the president of the United States.” Stone signed the document and went on to compare his trial to “a lynching” and criticize the jurors who convicted him.

Stone was previously employed by Infowars and co-hosted a show called War Room with conspiracy theorist Owen Shroyer. Shroyer has also promoted Sandy Hook conspiracy theories, as well as coronavirus denial and claims that George Floyd’s killing by Minneapolis police was staged and his funeral was a “hoax.” During Stone’s trial, Infowars led efforts to attack and out the identities of jurors, and while the jury was deliberating, Jones broadcast a message from Stone asking Trump for a pardon. The judge overseeing the case later cited Infowars’ efforts in a ruling to shield juror identities from the public to protect their safety.

During his appearance on The Alex Jones Show, Stone called for retribution against those who prosecuted him, singling out Assistant U.S. Attorney Aaron Zelinsky for firing and prosecution. Zelinsky recently testified before a congressional committee that other people at the Justice Department told him that Stone was receiving preferential treatment in sentencing because of his longtime friendship with Trump.

Stone's commutation after being convicted of trying to hide Trump’s own wrongdoing has been described as one of the most corrupt acts a president has ever engaged in. And now he's back to his 2016 election role of bolstering Trump to mainstream reporters:

Roger STONE, one of Trump’s original 2016 campaign, approves of his campaign moves. In a message, he said, “Bill Stepien is a highly capable professional with extensive experience. He is an excellent choice to run the president’s campaign. I am very encouraged by this decision.”