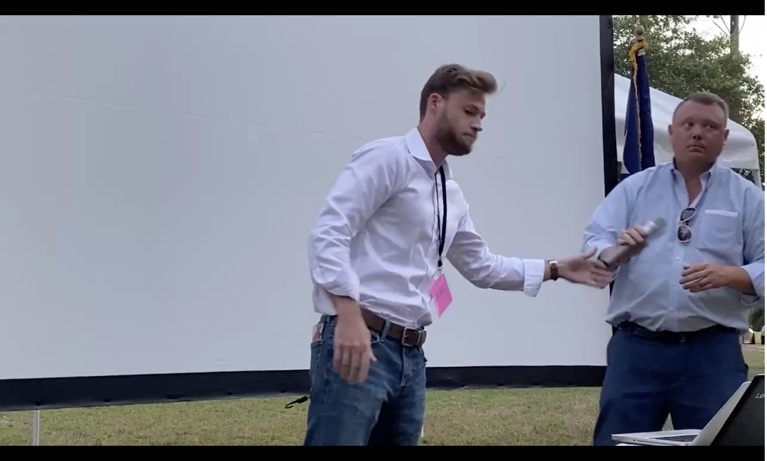 Update (6/29/20): Infowars host Owen Shroyer attended a June 27 county-level Republican Party convention where he attempted to become a delegate for the Texas State Republican Convention, which will be held in July. Speakers spoke in favor of and against Shroyer’s nomination, with those against citing Shroyer’s promotion of toxic conspiracy theories. Shroyer’s attempt failed on a voice vote and he began to yell, at which point he was escorted from the event by security.

The Republican Party of Travis County, Texas, invited Infowars host Owen Shroyer to speak at a meeting of the group's executives on June 16. Shroyer is a far-right conspiracy theorist who is currently being sued over his claims about the 2012 Sandy Hook school shooting, is a coronavirus denier, and has suggested that George Floyd’s death was staged and that his funeral was a “hoax.”

The Travis County Republican Party describes its purpose as “to elect more Republicans in Travis County and the greater Austin metro area” by promoting “time-honored Texas values here in the capital city of the Lone Star State.” The group’s invitation to Shroyer comes as several leaders of Texas county GOP groups have stoked national outrage by promoting the conspiracy theory that Floyd’s death was staged.

In his remarks, Shroyer thanked local GOP officials for inviting him before offering to help those in attendance with their campaigns. Shroyer insisted that President Donald Trump is not racist and also suggested that the coronavirus pandemic was a Democratic plot before telling attendees, “I think this Republican Party needs to be the Republican Party of the future, which is the Trump Republican Party”:

OWEN SHROYER (INFOWARS HOST): I want to thank Richard and Don for getting me out here, and Matt and Andy and others as well. … I’ll gladly offer my platform to Don and Mackenzie, Jennifer, we haven’t met but you as well, to help get you guys in office. I just want to ask you guys a couple questions as a pretense to how I think this party needs to move going forward, OK? Does anybody out there think Donald Trump colluded with Russia? Does anybody out there believe Donald Trump is a racist? Does anybody think Donald Trump engaged in a quid pro quo with Ukraine? Does anyone think Jussie Smollett was a victim of hate crime? No. No. These are all games that the Democrats and the media play to stymy America and stymy Donald Trump. And they’re doing it again right now with coronavirus. And I think that this Republican Party needs to be the Republican Party of the future, which is the Trump Republican Party, which doesn’t sit here and say, “Oh, how can I have a convention with your rules?” No, this Republican Party says, “We make the rules.”

After he was finished speaking, Shroyer handed the microphone to Travis County GOP Chair Matt Mackowiak, who he had thanked for inviting him to the event. In addition to Shroyer’s appearance, the Travis County GOP shared material on Facebook from the executive committee meeting promoting an upcoming event with Rep. Dan Crenshaw (R-TX).

Mackowiak previously criticized a fellow Texas GOP county leader who had promoted George Floyd conspiracy theories, calling on her to resign on June 3:

Shroyer’s appearance at the event with Mackowiak is being promoted at Infowars with the claim, “We need to restore our Republic from the ground level and Owen Shroyer is leading the way by getting involved in local politics.”

During the June 10 broadcast of Shroyer’s Infowars show War Room, Shroyer spent approximately 15 minutes promoting conspiracy theories about Floyd’s death. The broadcast was titled “George Floyd Funeral Hoax Exposed By Empty Casket - War Room Full Show” at Infowars’ streaming platform banned.video. Shroyer played a clip from a conspiracy theorist who alleged that Floyd’s death was a staged event with actors and then expanded on the claims, suggesting Floyd’s killing was staged as part of an effort to “sabotage President Trump” and that faking the event “wouldn’t even be hard.” Regarding Floyd’s memorial service, Shroyer repeatedly claimed that the casket was empty as evidence that the event was a “satanist black magic” ritual. (In fact, the memorial service included a viewing of Floyd’s body in his hometown of Houston, Texas.)

Shroyer has also been a driving force in spreading coronavirus conspiracy theories in Texas. He was the organizer of several rallies at the Texas state Capitol in opposition to public health measures on the basis of his claims that the coronavirus outbreak was a hoax perpetrated by the Chinese government. He is also being sued for his false claim that the father of a Sandy Hook victim lied about observing a bullet hole in his son's head.

This is not the Travis County Republican Party’s first promotion of extremism. In 2016, the group elected Robert Morrow as its chairman. Morrow is an associate of convicted felon and Trump confidante Roger Stone and is known for his frequent usage of the N-word, other racist comments, and extreme misogyny. The group’s leadership was eventually able to oust Morrow from the position.