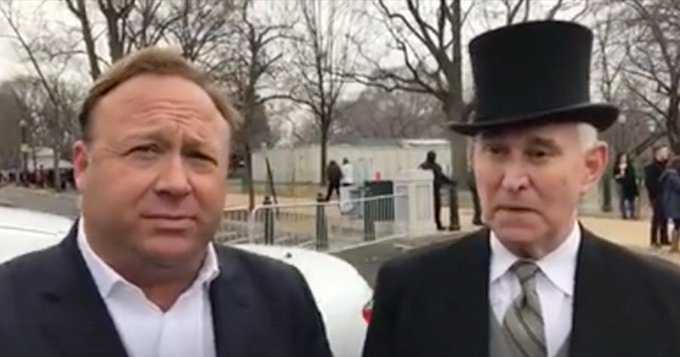 Trump confidant Roger Stone was convicted of seven felony counts, including charges that he lied to Congress and tampered with a witness, in federal court on November 15. Following his conviction, prosecutors argued that he should be immediately remanded into custody because he violated a gag order he is under by passing a public announcement through far-right conspiracy theorist Alex Jones the previous day. Stone, however, was released by the judge on certain conditions, including an ongoing gag order, as he awaits his February sentencing.

During his November 15 broadcast of The Alex Jones Show, Jones read a text message from one of Stone’s attorneys that purportedly said, “Your reporting almost got Roger taken into custody immediately upon the verdicts. The government cited you and argued for immediate imprisonment. Please be cautious about your comments concerning private communications.”

Media Matters previously reported that during his November 14 broadcast -- while the jury was still deliberating in the case -- Jones purported to share a message from Stone asking President Donald Trump for a pardon, and said that Stone told him, “Alex, barring a miracle, I appeal to God and I appeal to your listeners for prayer, and I appeal to the president to pardon me because to do so would be an action that would show these corrupt courts that they’re not going to get away with persecuting people for their free speech or for the crime of getting the president elected.”

Jones' on-air comments on November 15 reveal a rift between Jones’ Infowars, which previously employed Stone as a show host, and Stone’s attorneys. Jones went on to reiterate that he repeated the previous message at the request of Stone, complaining he was just “doing what Roger said”:

JONES: Roger wouldn’t talk to me about anything with the case except that he expected to be sent to prison and he feared for his life because it was totally -- because they were buying the lies and hated him. OK. He’s not even allowed to talk to his former co-host, he then says, “Yes, just ask for my pardon, and here’s the image, ‘Free Roger Stone,’ if I’m convicted.” So he’s not even allowed to say, “I want to be freed by the president.” And I need to watch out, the lawyers are telling me, because I’m doing what Roger said.

During his broadcast following Stone’s conviction, Jones also vowed to expose the identities of the jurors who convicted Stone, claiming they are “CIA operatives, Democrat Party operatives, people that work for Clinton, Obama, high-level.” While the trial was still underway, Jones unsuccessfully tried to out juror identities -- but in each instance, he named someone who wasn’t actually on the jury. In one case, Jones hosted Stone assistant Jacob Engels, who was present at the trial, in an attempt to elicit juror information.

Stone has been under a gag order that prohibits him from publicly discussing his case after he posted an image on his Instagram account of Judge Amy Berman Jackson “next to an apparent rifle scope's crosshair.” Prior to imposition of the gag order, Stone described the Infowars platform as “vital” to his criminal defense strategy.