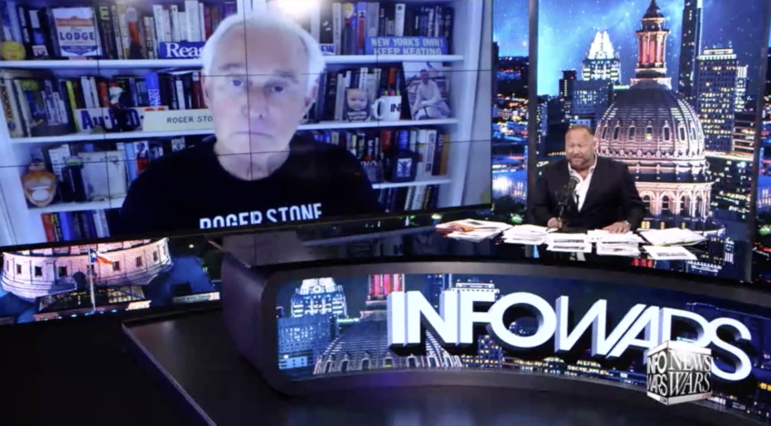 As Roger Stone emarks on a virtual media tour from home confinement, he is repeatedly deploying a talking point that offers an incentive to President Donald Trump if he were to grant him a pardon. According to Stone, if Trump offers him clemency, he will be a more effective advocate for Trump in the 2020 presidential election.

In November, federal prosecutors secured a conviction against Stone on seven felony counts after he lied to Congress, obstructed an official proceeding, and engaged in witness tampering in an effort to shield Trump from fallout related to the dissemination of Russia-hacked emails during the 2016 election. Stone was sentenced to serve 40 months in prison, and after further legal wrangling, the judge ordered him on June 26 to begin home confinement and report to prison by July 14.

Since then, Stone has been on a media tour, making virtual appearances at conservative outlets where he asks Trump to pardon him or commute his sentence. When asking for clemency, Stone has begun to argue that he will be of better assistance to Trump’s reelection prospects if he is not imprisoned during the final months of the campaign.

During a June 26 appearance on Fox Business show Lou Dobbs Tonight, Stone asked for a pardon and then moments later said, “The greatest thing here that bothers me, beyond the danger, is that I may not be free to do everything within my power to reelect this president.” He added, “I want to be free to make sure Donald Trump is reelected.”

Stone then made an appearance on the June 30 broadcast of Infowars’ The Alex Jones Show. (He was previously employed at the conspiracy theory outlet.) During the interview, Stone said he wanted to “appeal to the president” to grant him clemency “so that I can avoid dying in a dank squalid prison someplace when I should be on the battlefield doing everything I humanly can -- on my own, I’m not looking for a job -- to reelect this president.”

While Stone may not be publicly vying for a paid position, his offer to help Trump be reelected would be of value to the president. According to a report from nonprofit Protect Democracy about presidential pardons and bribery, “federal law prohibits public servants from exchanging official acts for anything of value for themselves or family members” -- and a pardon qualifies as an official act.

Stone and Jones returned to the topic later in the interview. Stone claimed that the reason for his legal problems and prison sentence is “they want me off the battlefield for 2020, that’s what I think most of this is really about.” Jones then suggested it would be “beautiful” if Stone was pardoned and then “Trump brought you in as a spokesperson or brought you in as an adviser.” Stone again said he was not seeking “a job” before highlighting actions he took during 2016 that he said helped the Trump campaign and declaring, “I will do everything I possibly can within the bounds of the law to reelect this president as I did four years ago.”

Stone’s work with the Trump campaign in 2016 is, of course, the reason he’s facing a prison sentence.

The same day, Stone appeared with conservative radio show host Dana Loesch and also made comments connecting a clemency grant to his ability to be “on the battlefield this November.”

Trump has previously signaled his willingness to engage in pardon offers that are actually bribery schemes. He reportedly offered Wikileaks founder Julian Assange a pardon if he “would publicly state that Russia had nothing whatsoever to do with the 2016 hack and leak of emails from the Democratic National Committee,” according to Vanity Fair. An August opinion piece in The Washington Post argued that Trump’s offer of pardons to officials who would break the law in order to more quickly construct a border wall “could easily violate the federal bribery statute” because the law “makes it a crime to give, offer, or promise ‘anything of value’ to a federal public official to influence the official in the performance of an official act or induce the official to violate his or her lawful duty.” According to the article, “‘anything of value’ is construed very broadly and goes far beyond briefcases full of cash.”