Holy shit. YouTube -- FOR THE SECOND TIME -- has taken down our compilation of Alex Jones' Sandy Hook lies. https://t.co/SkS0CKxM2j

They did the same thing last year. https://t.co/OIDBfeawul

The Twitter version of the video is below. https://t.co/qA2C2E2CQ7

Update (1/8/2019): On January 8, 2019, YouTube again issued Media Matters’ YouTube account a Community Guidelines strike for our “What Alex Jones said about the Sandy Hook shooting” video, writing that “Upon review, we’ve determined that it violates our guidelines.” In addition to the strike, YouTube claimed they have removed the video from the platform. However, as of 3:18 p.m. EST, the video is still live on YouTube.

On April 17, two Sandy Hook families announced defamation lawsuits against conspiracy theorist Alex Jones. While Media Matters has long documented Jones’ claims that the 2012 mass shooting in Newtown, CT, was staged, upon hearing the news of the legal action, my colleague Leanne Naramore made a compilation video of some of Jones’ attacks, which a cursory search showed no one had done before. Watch:

Sandy Hook families are suing Alex Jones. This is what he said about the shooting. https://t.co/JIwRYmrsmm pic.twitter.com/ddgDfMttjq

At some point over the next five days, though, YouTube removed the video from its website. If you go to the link now, this is all you see: 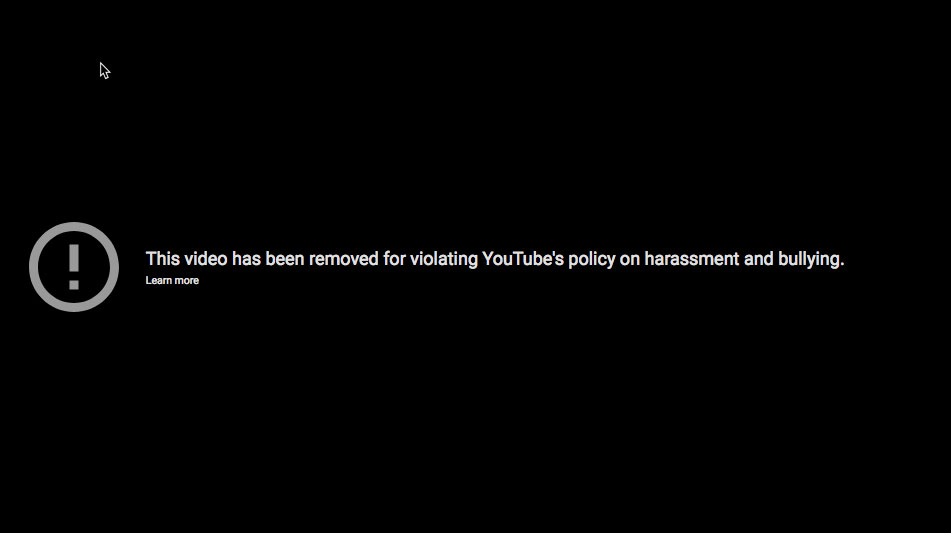 Yet here is a sampling of the Sandy Hook videos still live on Jones’ YouTube page, a number of which were used in making the compilation:

In February, Jones’ YouTube page was reportedly one strike away from being banned. Shortly thereafter, a large number of advertisers pulled their ads from his channel; President Donald Trump’s re-election campaign and the Republican National Committee kept airing ads on it, though.

It is not clear why YouTube holds Alex Jones to a lower standard than it does other users. The Sandy Hook hoaxes are not the only example of harassment on his channel. It’s pervasive -- part of Jones’ entire brand.

Meanwhile, research shows that YouTube’s algorithm directs users towards videos like the ones Jones posts, which the site then profits from. And while Facebook has undergone significant scrutiny in recent weeks, YouTube has thus far escaped significant criticism. There’s no better time than the present to change that.