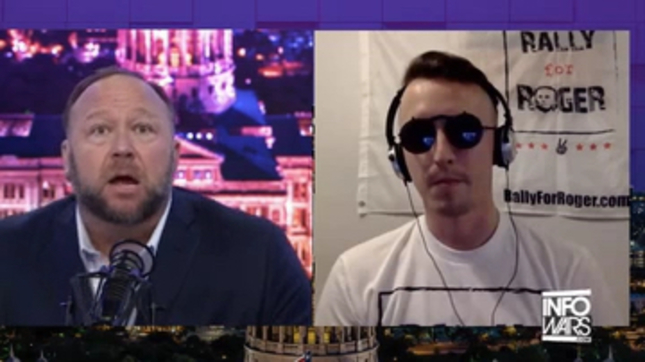 Far-right conspiracy theorist Alex Jones is attempting to disclose the identity of a potential juror for the trial of Trump confidant Roger Stone, who has worked at Jones’ Infowars outlet. Jones attempted to elicit the juror information from Jacob Engels, who often collaborates with Stone.

Stone appeared in federal court in Washington, D.C., today for jury selection as his trial begins over felony charges that allege he lied to Congress about his dealings with WikiLeaks concerning emails hacked by Russia in the 2016 presidential election; obstructed an official proceeding; and intimidated a witness, radio host Randy Credico.

The first step of the trial is interviewing potential jurors, and little progress was made during the first session as Stone began to suffer from food poisoning; after a pool is picked, both prosecution and defense will be able to strike individuals for any reason.

The first potential juror to be interviewed reportedly worked as the communications director at the Office of Budget and Management (OMB) during the Obama administration. During the November 5 broadcast of The Alex Jones Show, Jones and Engels both incorrectly said that the former Obama administration official had been chosen for the jury. Rather, Judge Amy Berman Jackson had approved the person as a potential juror. Additionally, they seemed to incorrectly indicate which official is the potential juror.

Jones then said, “We’ve got to have Obama’s former communications director hang Roger. Hell, if they give him the death penalty, maybe she can hang him and kick the lever and he’ll break his neck and she can piss all over his dead body.” Engels said of the potential juror: “All I can say is from what happened in the courtroom today, there was a well-known Obama communications asset that was allowed to be a juror.” He added that “her husband is a member of the deep state intelligence community.” Jones replied, “Hey, look up Palmieri’s husband.”

Jones also attacked Berman Jackson, saying she “should recuse herself. She’s known as a fraud.” Berman Jackson has been repeatedly attacked on Infowars, including by Jones, who compared her to Hitler.

Jones is now showing a willingness to sic his audience on jurors for Stone’s trial. Jones’ inflammatory rhetoric can have real life consequences. For example, an Infowars fan who consumed and shared false Infowars conspiracy theories about a Washington, D.C., pizza restaurant later decided to “self-investigate” the conspiracy theories and traveled to the restaurant and fired a gun inside.

Engels, who was recently described by The Daily Beast as Stone’s “mini-me,” was at the trial and was part of a small demonstration held outside. Engels is a member of the violent extremist gang Proud Boys and has often worked with Stone, including joining him on Infowars broadcasts. Stone used to host Infowars show War Room. He largely stopped making appearances when Judge Berman Jackson issued a strict gag order after Stone posted an image on his Instagram account of her “next to an apparent rifle scope's crosshair.”

Stone made his first appearance in months on The Alex Jones Show on October 25, discussing topics unrelated to his trial and making flattering comments about Donald Trump Jr. and Fox News hosts Tucker Carlson, Sean Hannity, and Laura Ingraham. The appearance seemingly ended a small falling out between Stone and Jones over Stone supposedly sharing “exclusive” information with outlets other than Infowars. Prior to the issuance of the gag order, Stone described the Infowars platform as “vital” to his criminal defense strategy.