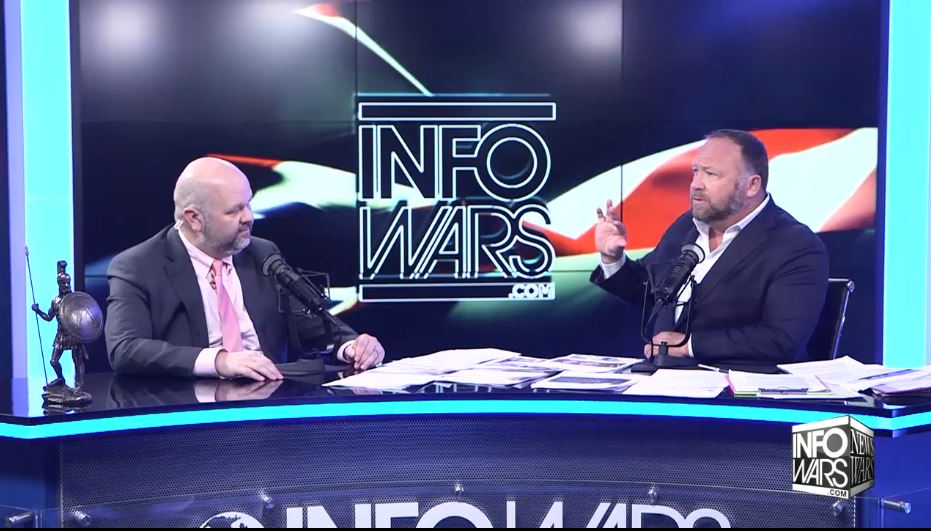 Trump confidant Roger Stone is under a gag order concerning his upcoming criminal trial, but his employer Alex Jones’ Infowars outlet is still publicly litigating his case for him.

Stone, who is a co-host of the Infowars program War Room, was arrested on January 25 and charged with seven felonies as part of special counsel Robert Mueller’s investigation. On February 21, Judge Amy Berman Jackson, who is overseeing his case, imposed a near-total gag order on Stone after he posted an image on his Instagram account of her “next to an apparent rifle scope's crosshair.”

According to the terms of the gag order, Stone is prohibited from publicly commenting on “the Special Counsel's investigation or this case or any of the participants in the investigation or the case.” Additionally, the order says that “the defendant [Stone] may not comment publicly about the case indirectly by having statements made publicly on his behalf by surrogates, family members, spokespersons, representatives, or volunteers.”

Before the gag order was issued, Stone was using his Infowars platform to raise money for his legal defense and publicly litigate his case. During a February 18 appearance on The Alex Jones Show, Stone alleged that his prosecution came about as part of the machinations of a “globalist cabal.” Earlier, on February 8, Stone attacked media pundits talking about his upcoming trial, saying on War Room that he was reveling “in the hatred of these leftist retards.”

While Stone is now severely limited in what he can publicly say about his case, his boss Alex Jones has taken the lead on Infowars’ defense of Stone. During a February 24 broadcast, Jones compared Judge Jackson to Hitler.

While complaining about Mueller prosecutor Jeannie Rhee, who is part of the Stone prosecution team, Jones said, “I couldn’t hold a straight face in that judge’s courtroom when Jeannie Rhee is my prosecutor. It’d be like I was a Jew in World War II, hypothetically, and the head judge is Hitler. I’d be like, ‘Dude, you’re Adolf Hitler.’”

Jones then turned to his guest, attorney Robert Barnes, to promote a conspiracy theory that attempts to connect Mueller to serial child molester Jeffrey Epstein. Epstein is currently in the news because a federal judge recently ruled that Trump Labor Secretary Alexander Acosta violated federal law in 2008 with his actions as a federal prosecutor in “concealing the particulars of Epstein’s [plea] deal from the girls who gave evidence” in his criminal trial.

Barnes weaved a sloppy conspiracy theory to claim that “the common denominator” between the Epstein, Stone, and former Trump campaign chair Paul Manafort cases is Mueller, who is “the deep state fix-it man” and is “still fixing things for the deep state.”

The Stone and Manafort cases are both, of course, connected to Mueller because they arose from Mueller’s investigation. As for Epstein, Barnes claimed that Epstein was directly giving Mueller “blackmail files” -- presumably related to other alleged perpetrators connected to Epstein's sexual misconduct case -- in 2008 when his plea deal was struck and Mueller was the head of the FBI. In 2018, the FBI disclosed that Epstein “provided information to the FBI,” but there is no indication that Mueller was the recipient of the information. Still, Barnes attempted to conspiratorially cast doubt on Judge Jackson and the legitimacy of the Mueller investigation:

ROBERT BARNES: So, there is one name that all those stories are connected to -- the Epstein case, the Manafort case, and the Roger Stone case, and interestingly enough it’s the one name that the judge in the Roger Stone case said that Roger Stone can never reference. Not only can he not reference it related to his case -- he can never talk about one name period while his case is pending in court, which could be years. And what name is that? Robert Mueller. And what is Robert Mueller to do with the Epstein case? Guess who was FBI director when that deal was done? Guess who was identified in internal FBI documents -- that were identified by a guy on Twitter called Techno Fog, a famous lawyer, that identified what, that the informant -- an informant for Robert Mueller was Mr. Epstein.

In other words, he was giving blackmail files, potentially, on a wide range of people to Robert Mueller at the same time the sweetheart deal that broke the rules was being filed on behalf of Epstein. And so while Epstein gets to sit in a sweetheart deal, Paul Manafort’s supposed to go to prison for life. Paul Manafort’s supposed to be the most harshly punished individual in one of the most historied political prosecutions. So Paul Manafort, who has never been accused of anything connected to pedophilia, is going to go to prison for life and rot until he dies, but Epstein, who is running a blackmail ring of underage prostitution, gets to walk. And the only man that they all have in common is Robert Mueller, and it’s the one person the judge said Roger Stone can never talk about, even unrelated to his case. So that’s the common denominator between all three is that the deep state fix-it man is still fixing things for the deep state.

Jones also defended Stone's Instagram post that got him sanctioned by the court. During his February 21 appearance before the court, Stone had acknowledged the post came about because of a brief lapse in judgement. But Jones stuck with Stone’s initial explanation for the image, describing the crosshair as “a little Celtic cross up in the corner” and showing the image to his viewers. Jones also falsely alleged that Jackson’s gag order prohibits Stone from speaking publicly about Epstein or President Donald Trump.

Borrowing language that Stone used before he was subjected to the gag order, Jones alleged that Stone is being pressured “to bear false witness against the president” and also addressed Trump directly, saying, “And we can talk about how great Trump is all day, but he’s asleep at the switch. Tweets don’t do it, President; protect us.”