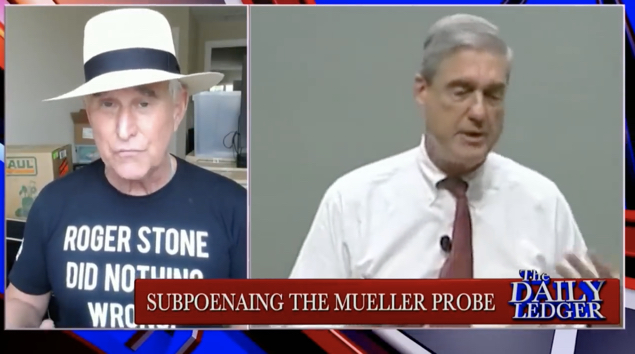 Trump confidant Roger Stone attempted to downplay the seriousness of criminal charges brought against him by referring to them as “process crime charges” during an interview with a conservative news outlet, echoing a talking point used by supporters of the president to attack special counsel Robert Mueller’s investigation. Stone is subject to a gag order that prohibits him from talking about his case or the Mueller probe except to declare his innocence or raise money for his legal defense.

Stone was arrested on January 25 and charged with seven felonies as part of Mueller’s investigation -- including five counts of making false statements to Congress and one count each of obstruction of a proceeding and witness tampering. On February 21, Judge Amy Berman Jackson, who is overseeing his case, imposed a near-total gag order on Stone after he posted an image on his Instagram account of her “next to an apparent rifle scope's crosshair.”

According to the terms of the gag order, Stone is prohibited from commenting to “the media or in public settings about the Special Counsel's investigation or this case or any of the participants in the investigation or the case.” After questions were raised about whether it would violate the gag order to publish a book Stone said he wrote prior to being charged, Jackson emphasized in a March 5 court filing that “there is no question that the order prohibited and continues to prohibit the defendant from making any public statements, using any medium, concerning the investigation.” She also added, “The fact that the order exists at all is entirely the fault of the defendant; the Court did not impose any restrictions on his speech whatsoever until, as he put it, he ‘abused the latitude’ the Court gave him.”

Still, Stone commented on his case during an interview with right-wing outlet One America News Network that was posted on YouTube on April 4. Stone said he wouldn’t voluntarily cooperate with a House Judiciary Committee investigation that requested documents from him because “unlike Jussie Smollett, I am still facing seven criminal federal process crime charges.”

Stone’s reference to “process crime charges” echoes a talking point he deployed after he was arrested, but before he was subjected to a gag order. During a January 25 appearance on CNN, the same day he was arrested, Stone emphasized that he had been charged with a “process crime” while claiming that “there's still no evidence whatsoever that I had advance knowledge of the topic, the subject, or the source of the WikiLeaks disclosures.”

Other supporters of Stone and the president adopted the same talking point throughout Mueller’s investigation. Following Stone’s indictment, attorney Alan Dershowitz -- a frequent defender of Trump on cable news -- wrote an opinion piece at The Hill about the “process crimes” Stone was charged with. While calling those charges “serious,” Dershowitz sought to contrast them with the possibility of “substantive crimes relating to Russia” and wrote that Stone’s indictment “follows a long pattern that should raise serious concerns about the special counsel.” On Trump’s favorite cable news show, Fox & Friends, Fox contributor Dan Bongino also reacted to Stone’s arrest by downplaying the indictment as “another process crime.”

So-called “process crimes” are a serious matters, as indicated by the fact that the crimes Stone is being charged with are all felonies. As an academic legal paper published in 2008 explained, these crimes, “if ignored, threaten to undermine the integrity of our criminal justice system.” As the article noted, the term “process crime” was invented by people critical of the authorities prosecuting crimes that arise out of an investigation:

The United States Department of Justice has come under attack in recent years because of its increased attention to, and prosecution of, crimes committed during the course of its investigations -- obstruction of justice, perjury, and making false statements. These crimes have been labeled “cover-up” or ”process crimes," and the charging prosecutors have been criticized as bringing such charges only against high-profile defendants as to whom there is insufficient evidence to charge the “more serious” underlying offenses that prompted the initial investigation. Some critics have gone so far as to label these prosecutions “vindictive.”

Much of this criticism is misplaced. These are serious -- not minor -- crimes, wholly deserving of prosecutorial attention and which, if ignored, threaten to undermine the integrity of our criminal justice system. In our adversarial system of justice, individuals have near-absolute rights to refuse to testify or to refuse to speak to investigators. Ignoring perjury and obstructive conduct poses a risk of diminishing the significance of these important rights.

In an opinion piece for The Washington Post following Stone’s arrest, former federal prosecutor Randall D. Eliason also pushed back on the fact that “Trump’s supporters have been quick to dismiss such charges as mere ‘process crimes,’” writing, “As a former federal prosecutor, I can tell you prosecutors don’t use the term ‘process crimes.’ They just call them ‘crimes’ and take them very seriously, because these crimes threaten the very foundations of the justice system.”