Misinformation-filled streams of Donald Trump's rallies are spreading rapidly on Facebook — which has banned the former president — thanks to an algorithm that prioritizes live videos, even though they are notoriously difficult to moderate. In fact, Media Matters examined a data set of news and political Facebook pages to determine which are spreading the live videos of Trump's rallies, and found right-leaning and ideologically nonaligned Facebook pages have earned nearly 25 million views on the videos, revealing the extent to which live videos can push misinformation and additional sensational content.

Right-leaning pages often use videos to promote sensational content (which is also favored by Facebook’s algorithm). Facebook knows that live videos, in particular, can enjoy “ultra-rapid virality” and that some live videos played a role in the January 6, 2021, insurrection. Additionally, the platform has struggled with COVID-19 and vaccine misinformation, and seemingly ignores live videos with such egregious misinformation. Yet the platform reportedly prioritizes live videos in its algorithm, giving them as much as 600 times more weight than other content. It also encourages users to use live video, and even provides tools to increase distribution and drive engagement of such videos, rather than working to develop better moderation practices.

New Media Matters data reveals the extent to which right-leaning pages, and even some ideologically nonaligned pages, use live video to push misinformation and additional sensational content. In fact, pages including those for Right Side Broadcasting Network, Fox News, and Breitbart — as well as some ideologically nonaligned local news pages — have repeatedly posted live videos of Trump’s rallies, which have continued in his post-presidential life and are filled with misinformation, such as the lie that the 2020 election was stolen from him. From Reuters:

Trump survived a second impeachment on a charge linked to the violence and has kept broad influence over the Republican Party, in part by leaving open the question of whether he will run for office again in 2024.

He dangled that possibility on Saturday to the crowd.

“We won the election twice, and it's possible we'll have to win it a third time. It's possible,” he said.

Regardless of this misinformation; Trump’s suspension from the platform for his role in inciting the events of January 6; and Facebook’s alleged bans of posts or ads that are “in his voice,” live videos of the rallies (including of Trump’s speeches, the crowd, and others speaking) earn millions of views.

Since Trump was suspended from posting new content on Facebook on January 6, 2021, right-leaning pages that cover U.S. political news have posted at least 110 live videos of his misinformation-filled rallies. These videos earned over 2.8 million interactions, had over 14 million post views, and earned over 20 million total video views. (Total video views represent the total number of views that a video has received, while post views represent the number of views that happen on a specific post from a page.)

Notably, among right-leaning pages, 9 of the 10 owned videos with the most total views were from Fox News, Breitbart, and Right Side Broadcasting. (Owned videos are those created by the page, rather than just being shared by it.)

Right-leaning pages were not the only politics and news pages boosting Trump rallies on Facebook. Ideologically nonaligned pages also posted a number of live videos of the rallies without incorporating any pushback or fact-checking. In fact, ideologically nonaligned Facebook pages have posted at least 30 live videos of Trump’s misinformation-filled rallies, earning nearly 325,000 interactions, over 2.2 million post views, and over 4.5 million total video views during his suspension from the platform.

The ideologically nonaligned pages posting these videos are mostly local news outlets across the country, but roughly half (14) of the 30 posts are from pages owned by conservative propaganda company Sinclair Broadcast Group. Sinclair’s pages for local stations in Maryland (WBFF), Virginia (WCYB), Michigan (Mid-Michigan NOW), and Ohio (WKRC) even posted multiple live videos from different Trump rallies, including those outside of their local media market.

Notably, among the nonaligned Facebook pages, 6 of the 10 owned or crossposted videos with the most total views were from Sinclair or Fox. (Crossposting is a way to share a video from multiple Pages through original posts rather than sharing from each other's pages.)

Trump’s own previous posts with live videos of his rallies are still on Facebook, despite his suspension

Even as Trump is suspended from posting on Facebook, older live videos on his page can still be viewed and users can still engage with them.

Between January 1, 2020, and January 6, 2021 — when Trump was ultimately suspended from posting on Facebook — Trump posted 46 live videos of his rallies or other speeches. These videos earned over 6.6 million interactions and over 83 million total views.

Among these is a video of Trump’s speech on November 4, 2020, in which he falsely declared victory in the presidential election, even though legitimate votes were still being counted. The video earned over 14 million views. 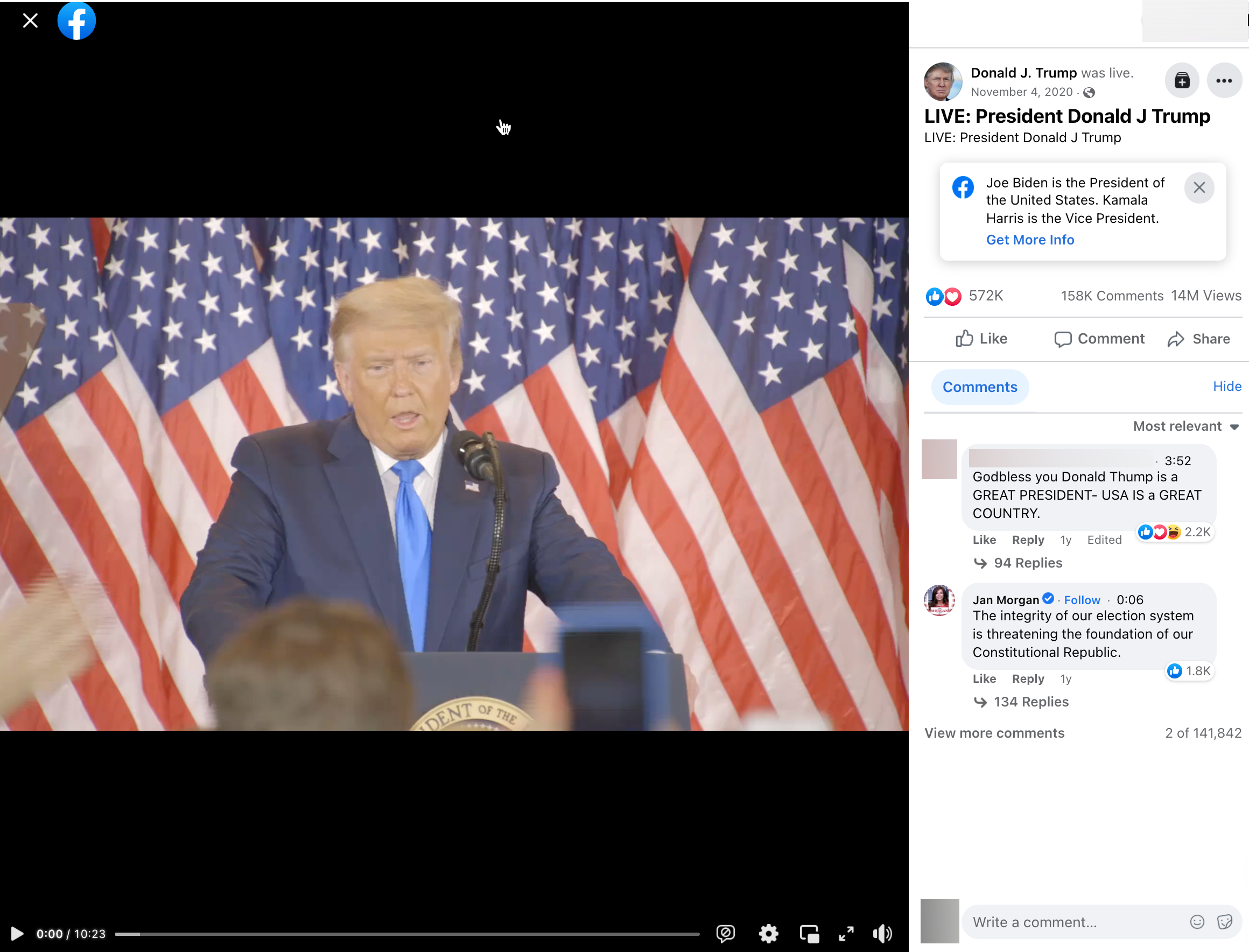 Facebook has continued to enable Trump to spread misinformation on its platform by airing live video of him pushing lies at his rallies — one of several loopholes that the company has left open during his suspension.