Former President Donald Trump was suspended from posting on Facebook for at least two years after he used the platform to incite violence on January 6. Now, six months after pro-Trump rioters stormed the Capitol, Facebook is letting the same misinformation that fomented the insurrection spread by allowing users to interact with Trump’s old posts promoting post-election rallies and speeches, hosting new videos promoting his recent events, and even earning revenue from ads promoting them.

On January 6, pro-Trump rioters stormed the Capitol in an attempt to stop the final certification of the 2020 presidential election. This violence came after months of Trump and his allies spewing lies about widespread voter fraud and claiming that President Joe Biden “stole” the election.

In the days after the insurrection, Facebook COO Sheryl Sandberg dismissed the company’s role in enabling it, claiming that “these events were largely organized on platforms that don’t have our abilities to stop hate, don’t have our standards and don’t have our transparency.” An internal memo later detailed the amount of data the company had about the spread of the “Stop the Steal” campaign prior to January 6, and the authors claimed that Facebook could not have known that it was a “coordinated effort to delegitimize the election.”

The aggregate of reporting, research, and data strongly suggests otherwise.

Despite Trump’s suspension and his continued promotion of misinformation about the 2020 election, including at post-presidency political events and rallies, Facebook is allowing Trump’s PAC to run ads promoting them. Right-wing media and conservative figures are also earning millions of views on videos of these rallies, while Trump’s Facebook posts promoting rallies that were held after the election and prior to his suspension are still earning engagement. This means both Trump and Facebook are profiting from the continued spread of the same harmful election lies that fomented the events of January 6.

Facebook has earned over $15,000 from ads promoting Trump’s post-presidency rallies

Trump’s Save America Joint Fundraising Committee has run at least 251 ads promoting his June 26 rally in Ohio and his July 3 rally in Florida. These ads earned over 840,000 impressions, and Facebook earned over $15,100 in revenue on the ads.

The PAC ran 119 ads specifically about the June 26 rally in Ohio, spending at least $6,500 and earning more than 490,000 impressions. Facebook removed 86 of them for violating its advertising policies, but it let the PAC continue to run identical ads. (It is unclear which policy they violated.) 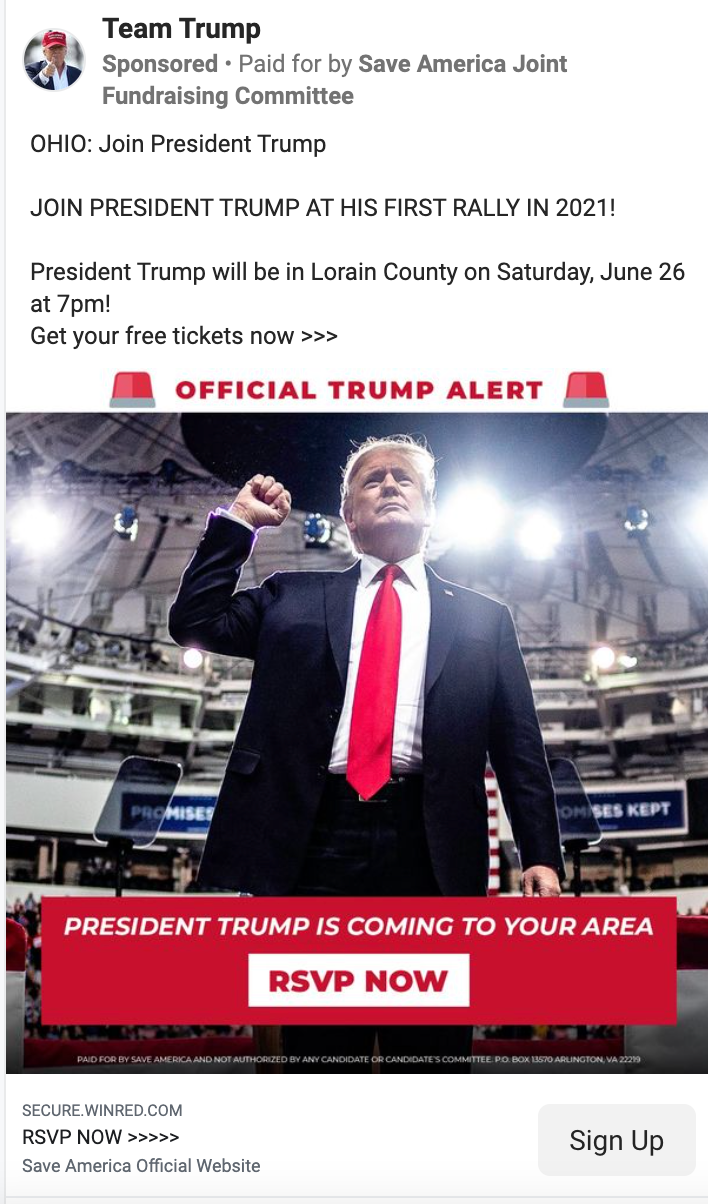 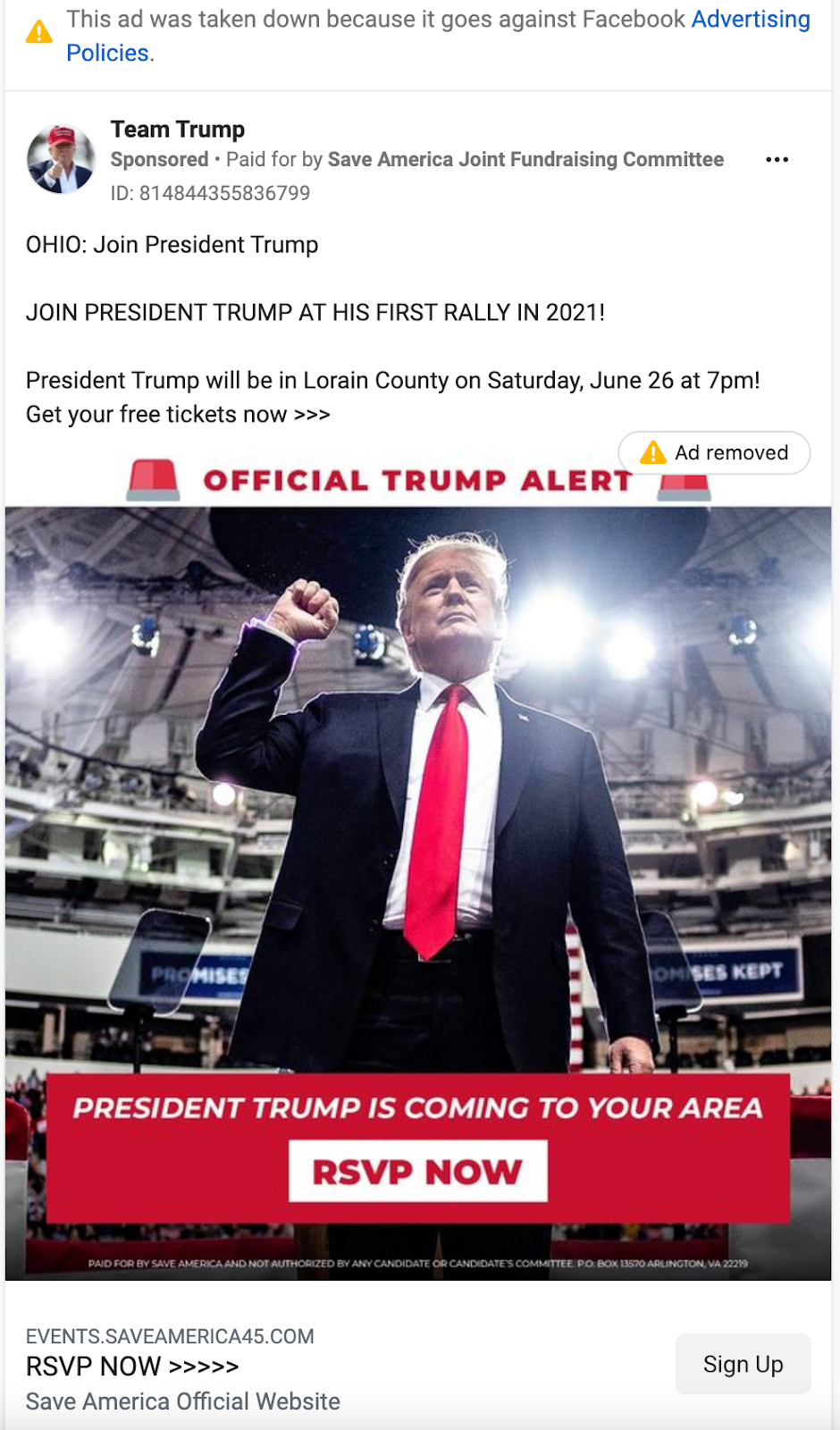 The PAC ran 132 ads specifically about the July 3 rally in Florida, paying Facebook at least $8,600 and earning more than 351,000 impressions. 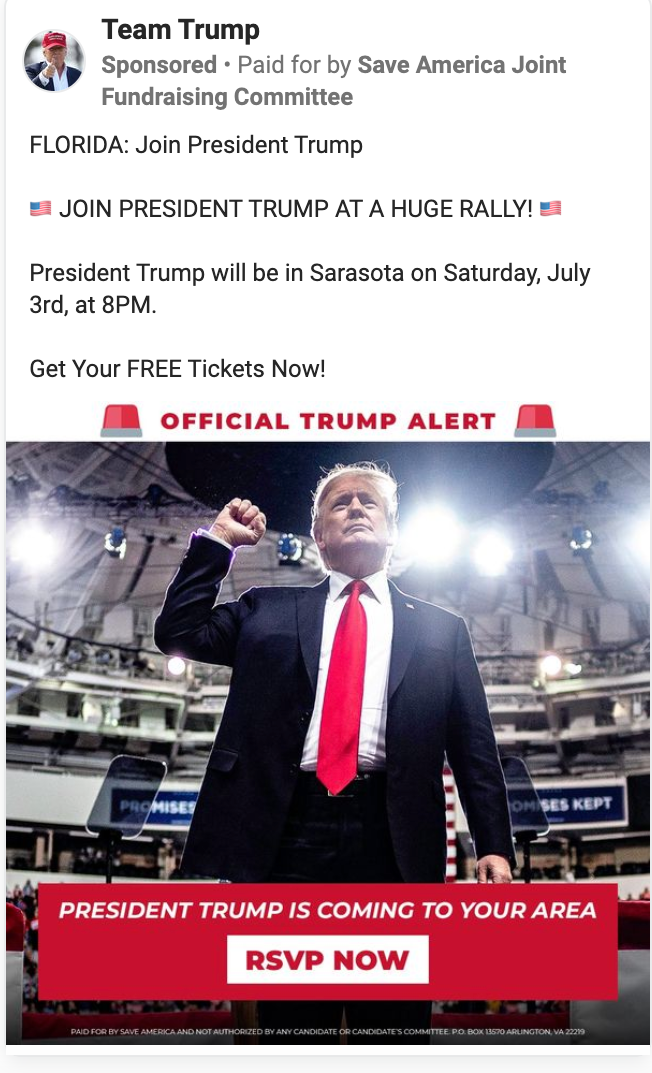 Trump’s PAC is also running at least 12 fundraising ads for a chance to meet the former president at his next rally. At time of publication, nine of the ads are still active, while the PAC spent at least $500 and earned more than 155,000 impressions. 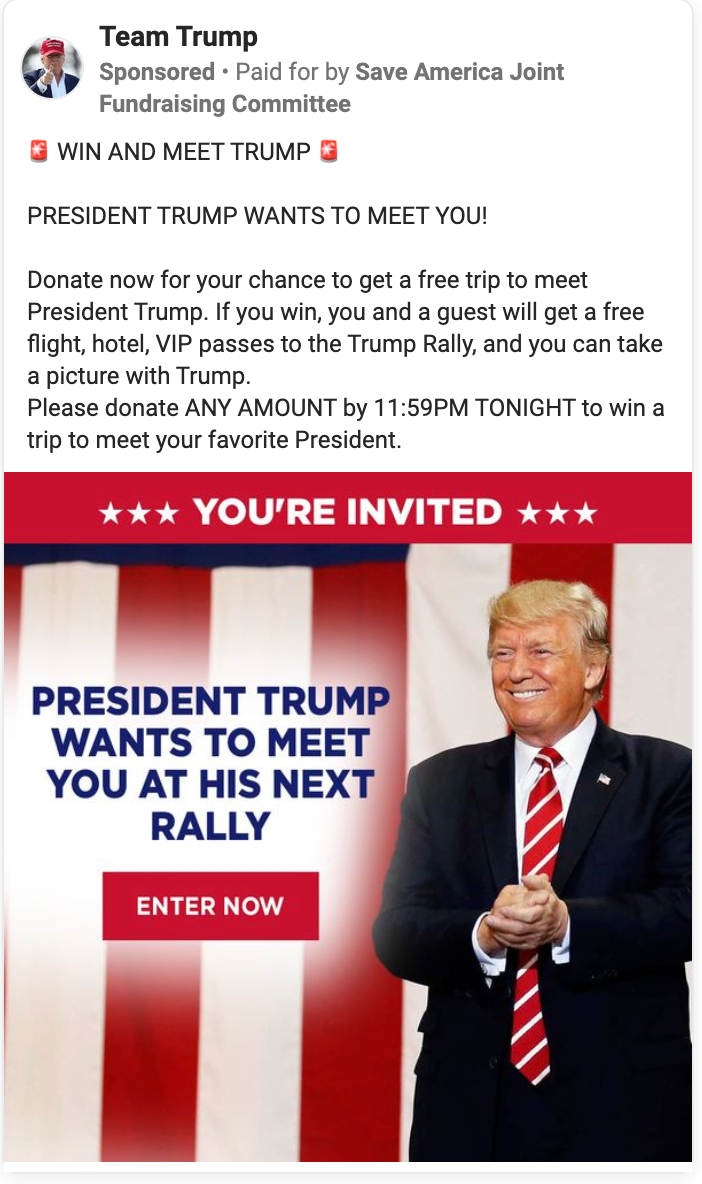 On Facebook, right-wing media and figures have earned more than 12 million views on videos of Trump’s post-presidency rallies

Media Matters also found at least 58 videos of Trump’s post-presidency rallies that right-wing media and figures have posted on Facebook. These videos have earned at least 12.9 million views, and 31 of the videos were posted by pro-Trump media outlet Right Side Broadcasting.

There are 22 videos that specifically promote Trump’s rally in Ohio on June 26, which he used to push more election misinformation about the 2020 presidential election. These videos, which were posted by right-wing media outlets Breitbart, Newsmax, The Daily Caller, and Right Side Broadcasting, and right-wing figures Rep. Marjorie Taylor Greene (R-GA), Benny Johnson, and Derek Utley, earned over 7 million views. Right Side Broadcasting’s live eight-hour video, which included all the speeches as well as interviews with supporters equally rife with misinformation, earned over 1.6 million views. 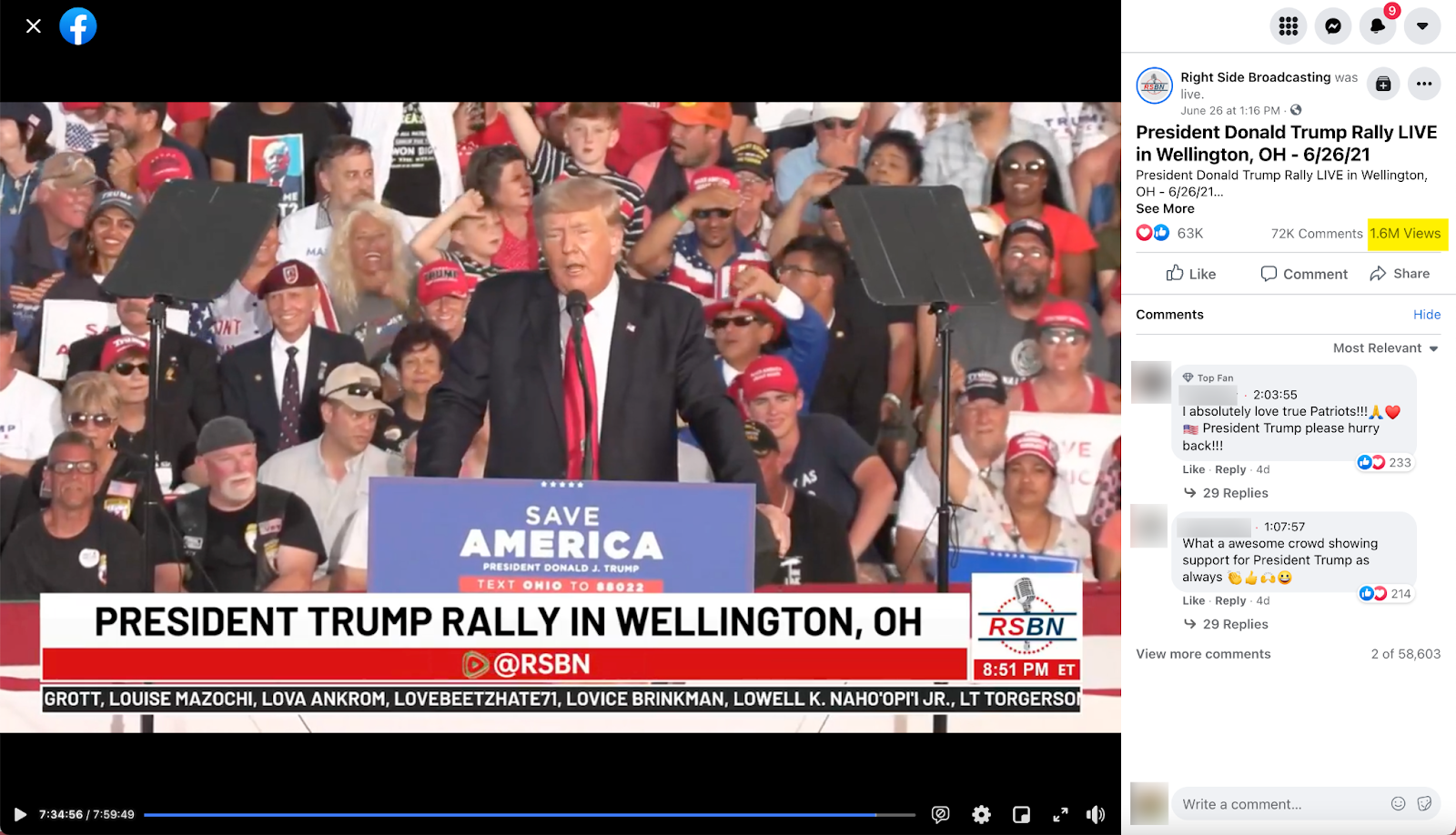 There are 36 videos that specifically promote Trump’s rally in Florida on July 3, in which he repeated the refuted claim of a “rigged election” and called the American election system “sick.” These videos, which were posted by right-wing media outlets Right Side Broadcasting, Breitbart, Newsmax, and The National Desk - TND, and Republican figures Rep. Greg Steube (R-FL) and Christian Ziegler, earned over 5.8 million views. Right Side Broadcasting’s livestream video of Trump’s speech earned over 1 million views. 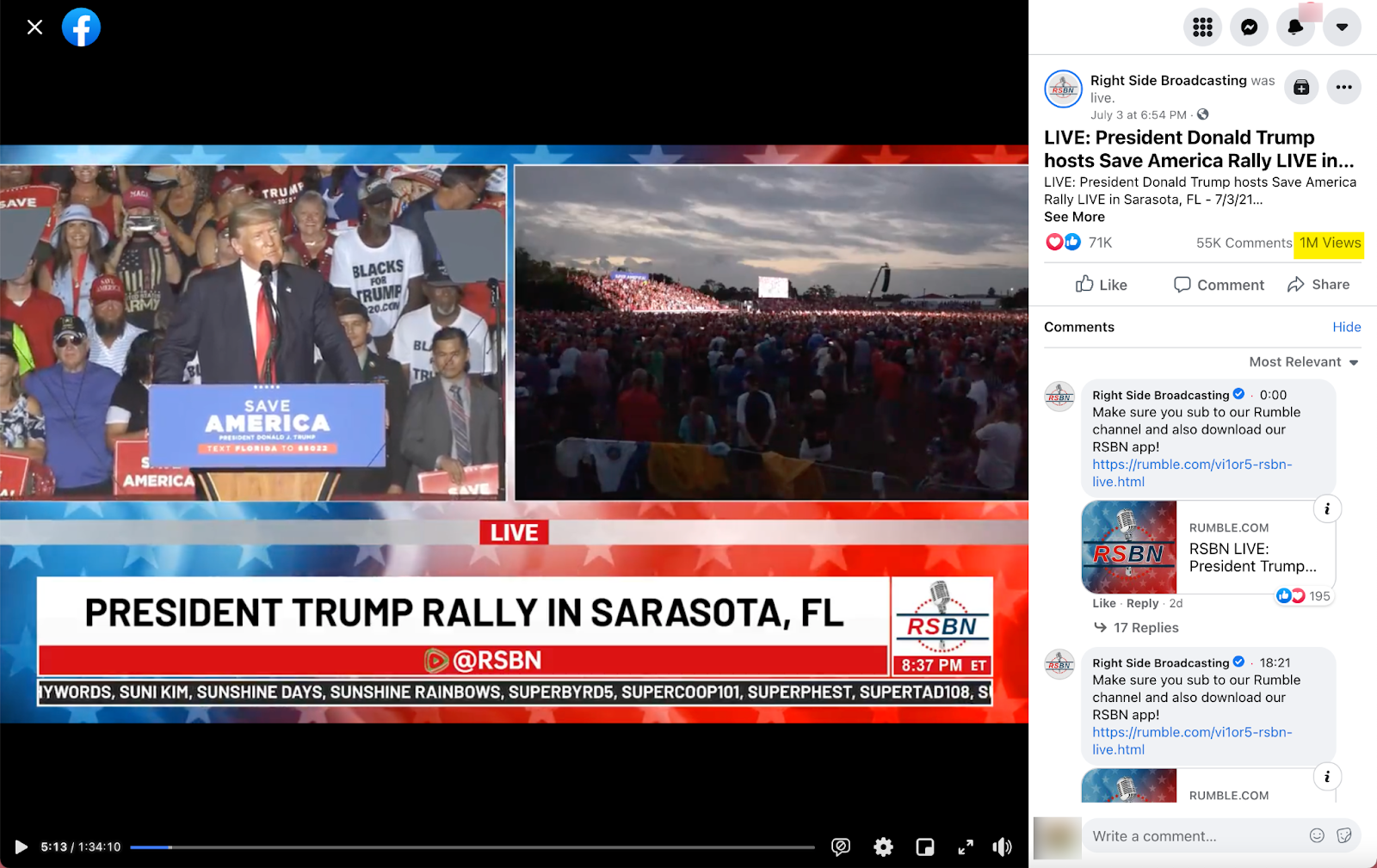 Even though he’s suspended, Facebook users can still interact with Trump’s Facebook posts, including ones promoting his pre-ban rallies and speeches that sparked an insurrection

Media Matters has previously reported that Trump posted on Facebook at least 6,081 times between January 1, 2020, and January 6, 2021, with roughly a quarter of those posts containing COVID-19 misinformation, election lies, or extreme rhetoric about his critics, and at least 506 posts being labeled by Facebook with authoritative information, particularly about the election and election processes.

Despite Trump’s two-year suspension and the abundance of misinformation in his available posts, they are still active on Facebook and users are able to engage with the content by viewing videos and reacting, commenting, and even sharing.

We found at least 55 of Trump’s posts that promote his post-election (but pre-ban) rallies and speeches, in which he pushed misinformation and rhetoric that fomented violence on January 6. These posts earned more than 27 million interactions, combined. Some of the individual posts even earned over 1 million interactions.

Of these posts, 23 of them included videos of the rallies, such as showing rally crowds and videos of the speeches. A video of Trump’s speech at the White House on December 2, which The New York Times called “a 46-Minute Diatribe” that was “filled with false allegations about voter fraud,” earned over 1 million interactions and 14 million views. 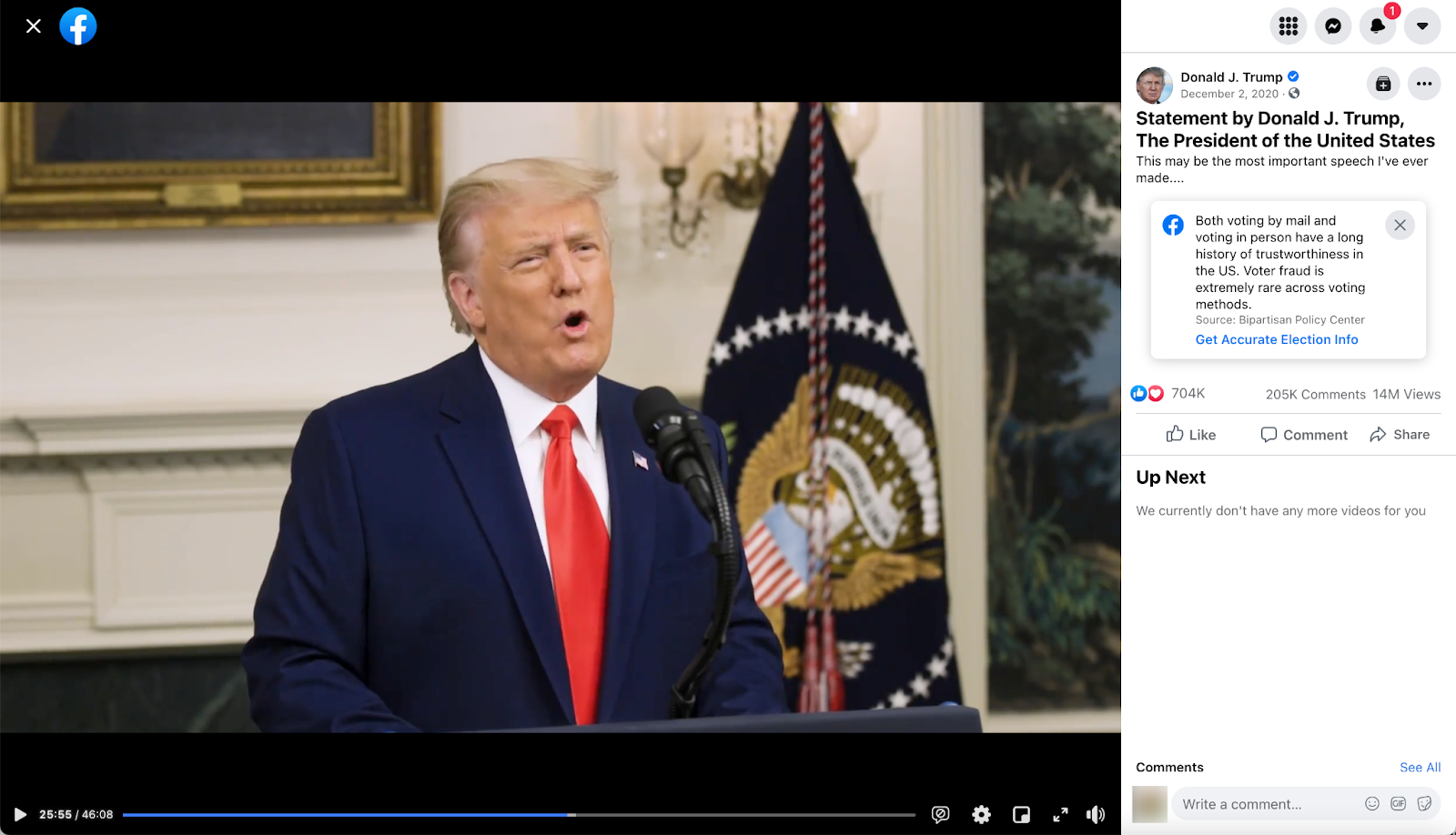