Facebook has earned up to $1.5 million in revenue by enabling former President Donald Trump -- who is currently suspended from its platforms -- to run ads through his joint fundraising committee. According to Facebook, groups affiliated with Trump are allowed to run ads that don’t link to Trump’s website, include video of him speaking, and “aren’t in his voice.” But thousands of ads from the last five months tell a different story.

Media Matters has found that Trump’s Save America Joint Fundraising Committee has run 4,898 ads on Facebook in the last five months. This fundraising committee is a joint venture between Trump’s Make America Great Again PAC and his newer Save America leadership PAC that Trump’s spokesperson has called his “primary political vehicle.” According to data from the Dewey Square Adwatch tool set to analyze Facebook ad data, these ads have earned between 37.3 and 48.2 million impressions, and Facebook has received between $841,000 and $1.5 million for the ads.

Since our last report on October 4, Trump’s fundraising committee has run at least another 931 ads. The ads earned between 14.8 million and 18.2 million impressions and in return, Facebook received between $461,000 and $650,000 in revenue.

We have previously reported on the committee's ads between June and October, including:

The latest 931 ads include claims the 2020 election was “tainted,” suggestions that Trump is “the true president,” promotions of the recent victory of Virginia gubernatorial candidate Glenn Youngkin, attacks on the Biden administration’s vaccine mandates, and claims that the Second Amendment is under attack. Trump’s fundraising committee is also running some similar ads on Google. 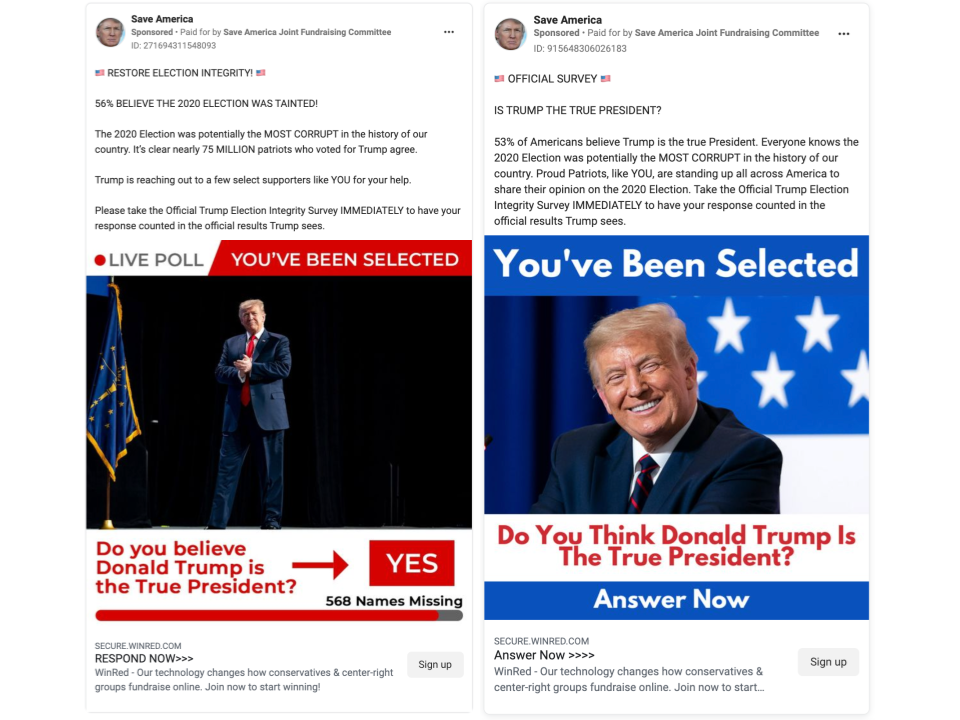 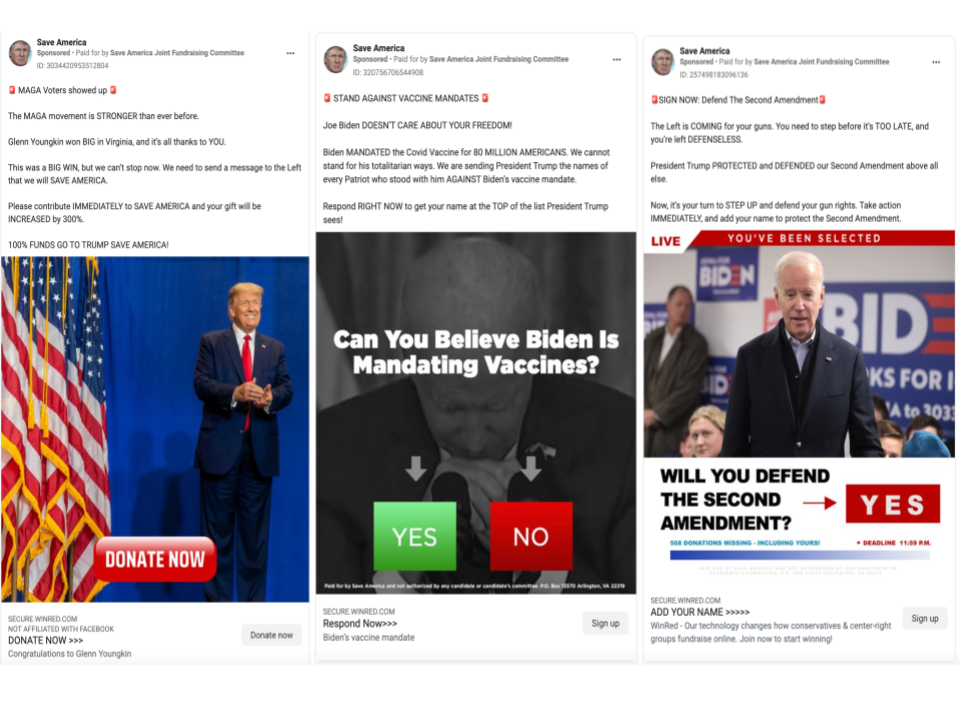 After inciting violence on January 6, Trump was suspended from posting on Facebook for at least two years, but the platform left his page up along with all of its posts and users can still interact with the content. Facebook also created a standard that allows posts or ads that aren’t “in his voice,” which was confirmed by Facebook spokesperson Devon Kearns to The Washington Post:

This “in his voice” standard appears to be very narrow and allows several loopholes which Trump’s fundraising committee is using to run ads, including ones with the same problematic election misinformation that contributed to Trump being suspended in the first place. The committee also runs ads containing videos of Trump speaking and ads that link to a fundraising website that sometimes quotes him.

Also, despite not having an official campaign, Trump is using Save America and his fundraising committee as his “primary political vehicle,” flouting his Facebook ban while continuing the same advertising on the platform as before his suspension. In fact, before he was suspended, Trump and his campaign typically ran ads that spoke about Trump in third person -- not necessarily “in his voice” -- and now the ads from his fundraising committee continue to use similar third-person language.

Ads with video of Trump speaking

Videos of Trump speaking apparently fall under the “in his voice” category and emails from Facebook to Trump’s daughter-in-law Lara Trump confirm that such videos are not allowed on the platform. 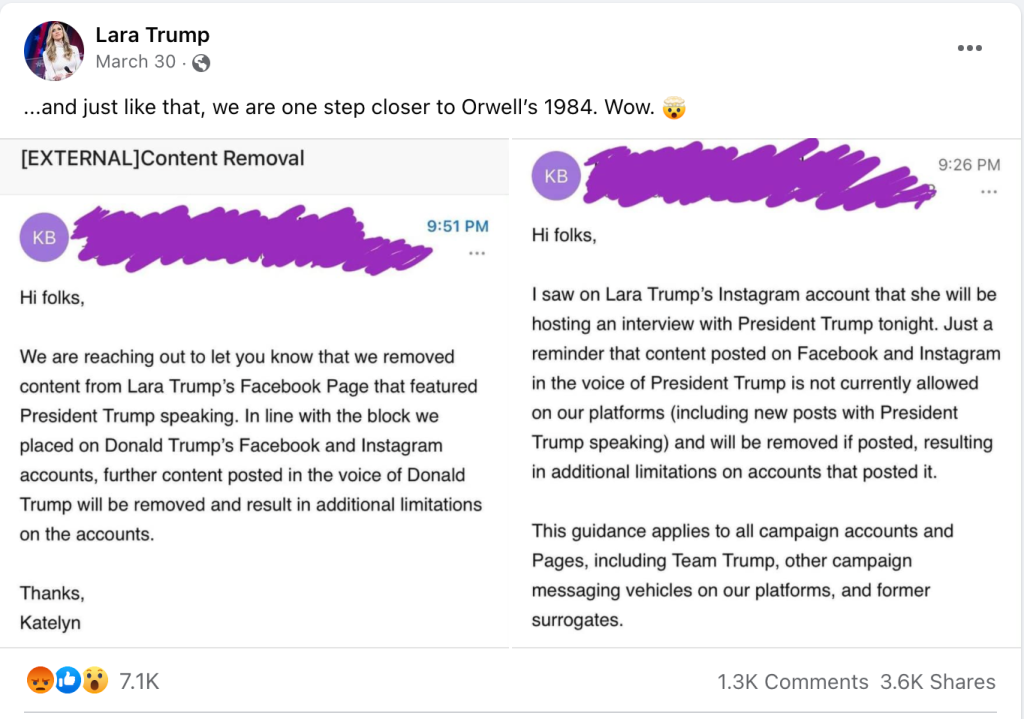 Yet, Facebook is allowing Trump’s fundraising committee to run ads with such videos. 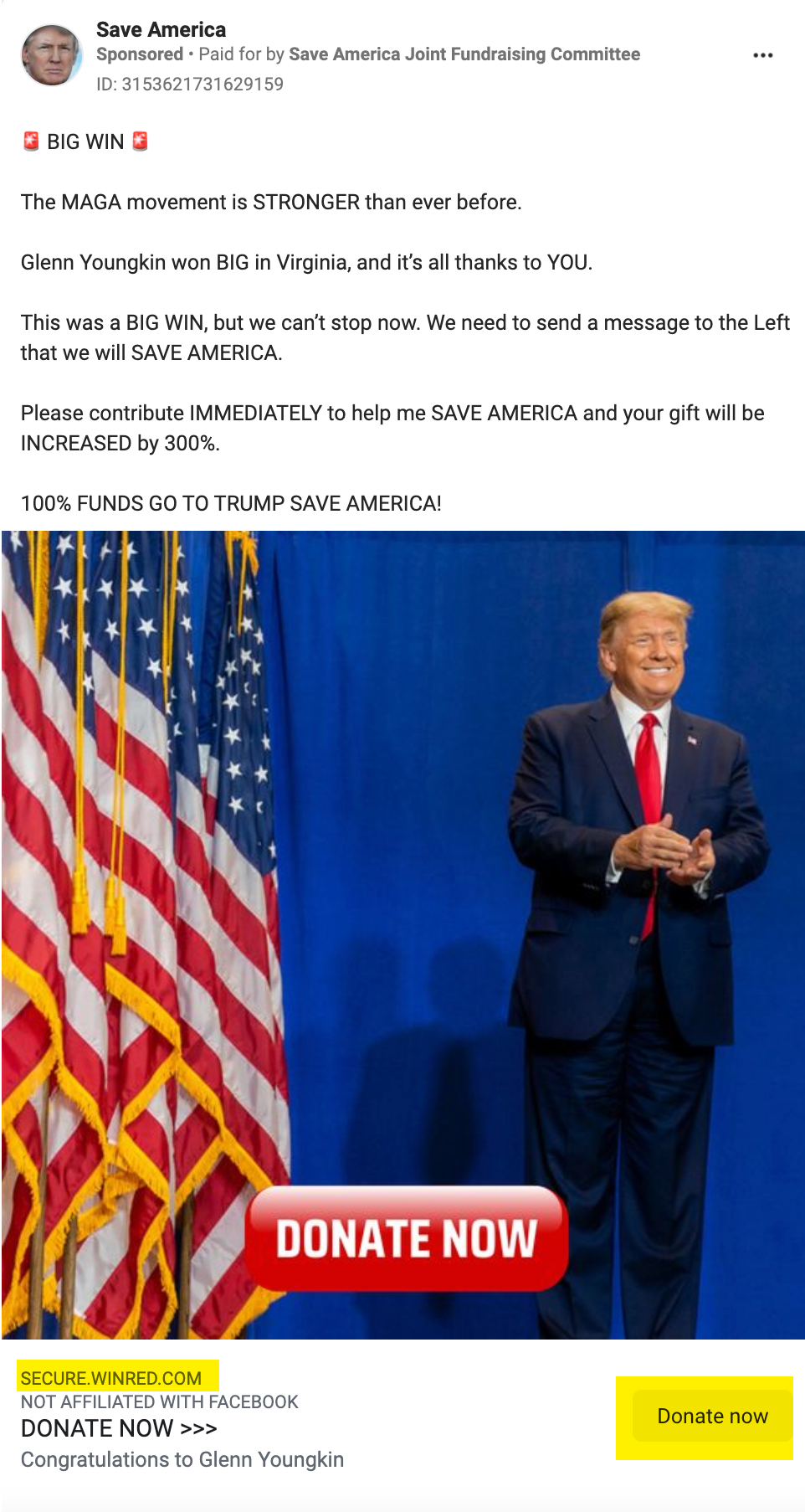 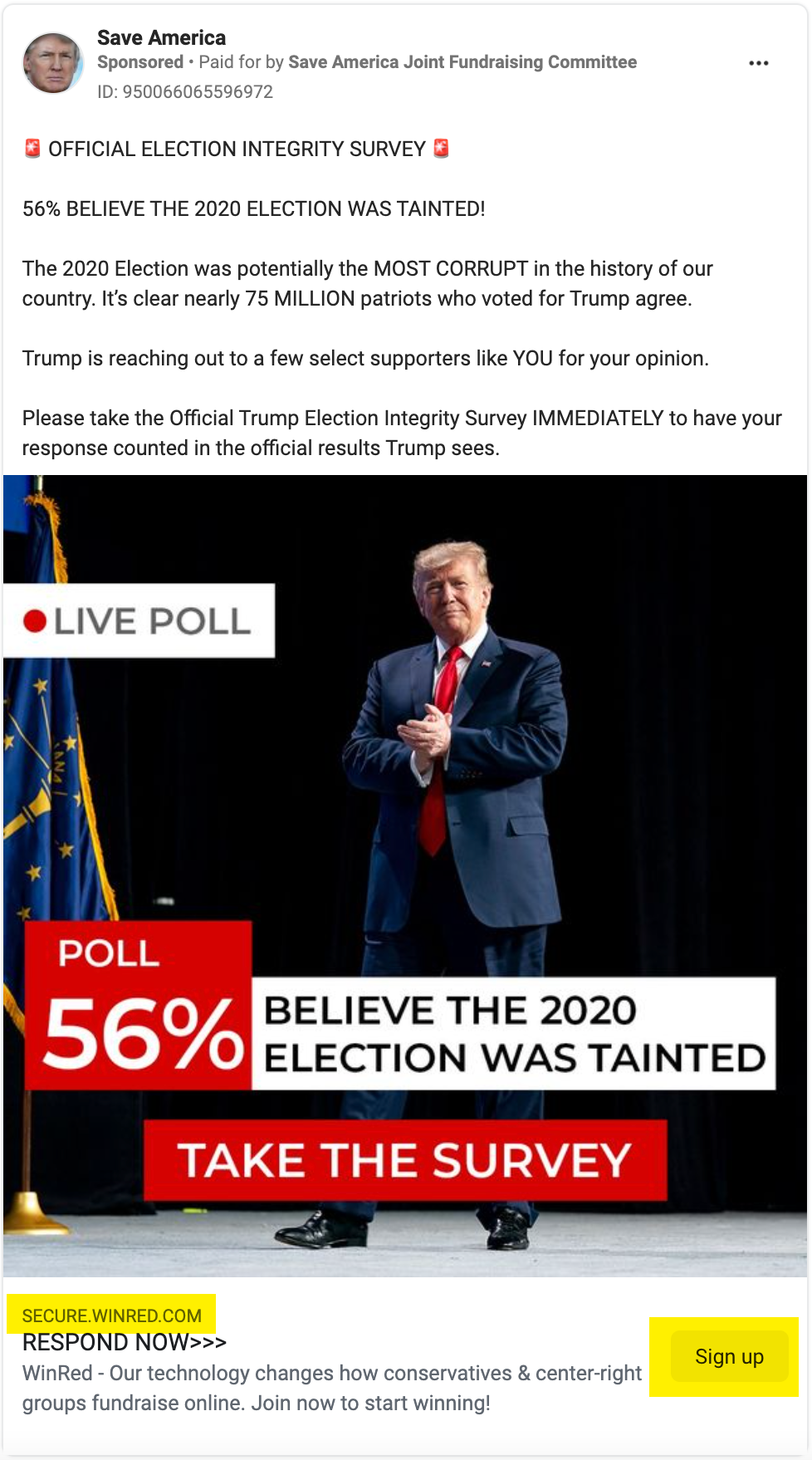 Additionally, Facebook reportedly “removed ads that appear to quote Trump, even when the quotes appear on a landing page linked to the ad.”

Regardless, an ad asking whether “Trump is the true president” links to a landing page that asks if users agree with Trump that “Cheating In Our Elections Is A Serious Problem.” 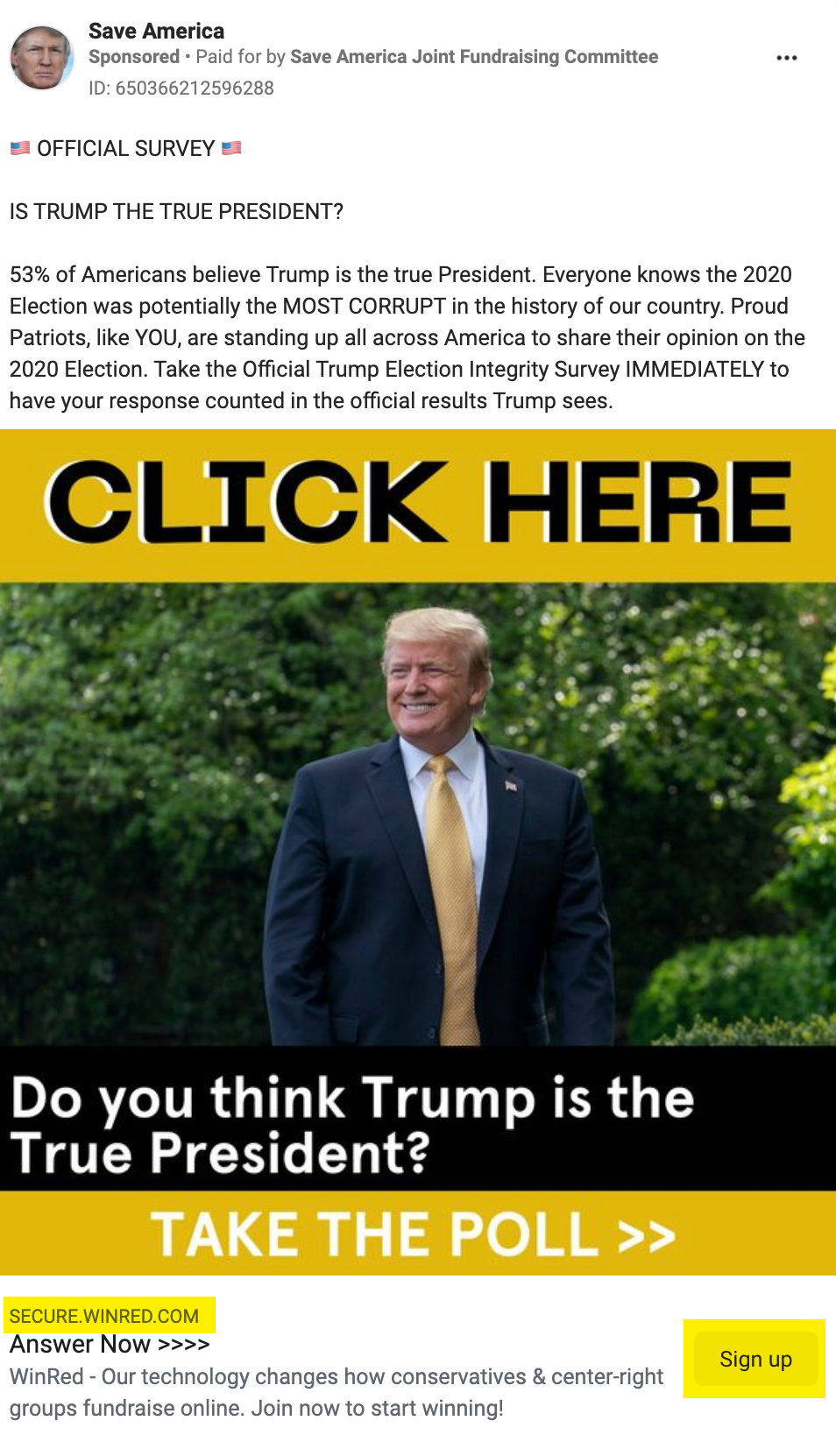 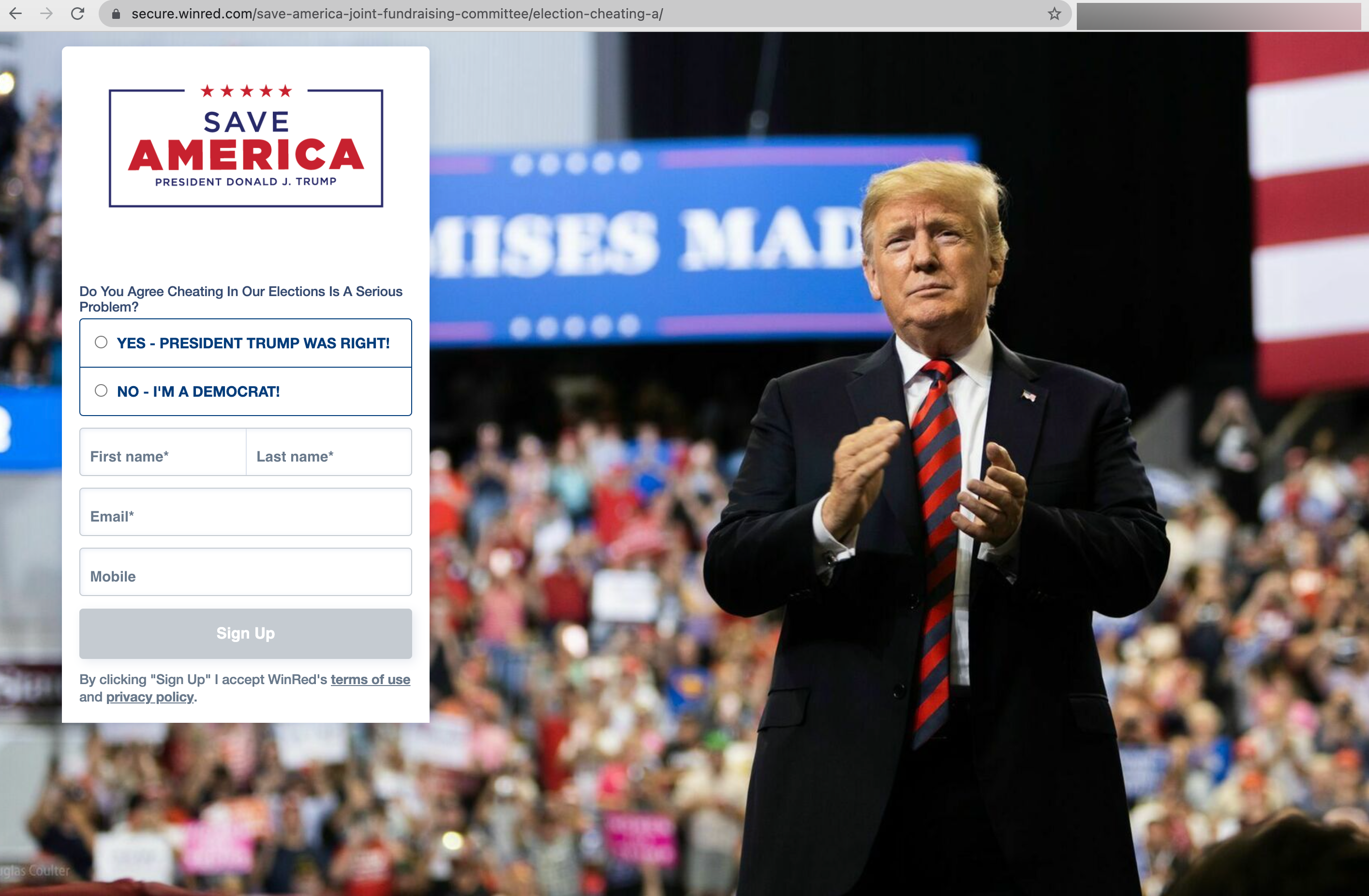 Another ad that claims to show “President Trump’s ad” links to a landing page with multiple quotes from Trump, including a quote that says, “Every time I see another Patriot make a contribution to stand with me and save our Country, I’m inspired to fight EVEN harder for you. I’m really counting on YOU to step up!

Media Matters has repeatedly reported on campaign ads from Trump’s own page prior to the 2020 election, including ads with COVID-19 and election misinformation, antisemitic imagery, a Nazi symbol, and manipulated photos. Many of these pre-election ads discuss Trump in third person -- not “in his voice” -- and use similar language as Trump’s organic posts in 2020, including “fake news,” “sleepy Joe,” and “corrupt” Democrats. The ads Facebook is allowing Trump to run through his fundraising committee mirror this language and third-person style, even though he is suspended.