If your Facebook feed was filled with stories from The Epoch Times and its affiliated pages in the aftermath of the 2020 election, overthrowing the U.S. government on January 6 might have seemed like a reasonable thing to attempt.

In the days, weeks, and months that preceded the ransacking of the Capitol by a pro-Trump mob, right-wing conspiracy theory rag The Epoch Times and its sister network New Tang Dynasty (NTD) flooded their audience with deranged conspiracy theories designed to undermine faith in the presidential election results. To that end, the network enthusiastically and credulously parroted false claims of voter fraud that emanated from the far right, including hundreds of posts about Dominion Voting Systems, an election systems company that pro-Trump media falsely accused of rigging the election for President Joe Biden as part of a global conspiracy originating from Venezuela. They also prominently featured Trump-aligned fringe personalities like attorneys Sidney Powell and Lin Wood and businessman Mike Lindell across their pages and promoted “Stop the Steal” events from organizers Ali Alexander and Alex Bruesewitz.

“If we let them get away with stealing this election, I think they’re going to steal every election moving forward,” Bruesewitz declared in a December 30 Facebook video that was shared on several Epoch-affiliated pages. (As of publication, this post remains active and is not labeled as misinformation.)

Ahead of the presidential election, Facebook began adding warning labels to some election-related content. In November, the company told reporters that it had labeled more than 180 million posts as voting misinformation and removed another 265,000 pieces of content that violated its rules. Yet despite Facebook’s supposed commitment to moderating and labeling potentially dangerous and false election content on its platform, a Media Matters review found that Facebook has done practically nothing about explosive misinformation that spread widely on Epoch and NTD pages.

Using data from CrowdTangle, an analytics tool owned by Facebook, Media Matters identified at least 1,000 posts with discussion related to election fraud on 13 Facebook pages associated with either The Epoch Times or NTD between Election Day and January 6, receiving nearly 1.4 million total interactions. Many of these posts peddled the fiction that the presidential election was tainted by fraud and the Big Lie that former President Donald Trump actually won.

In just the last few years, The Epoch Times -- and its network of affiliated outlets -- catapulted itself from an obscure, low-budget newspaper run by members of a secretive Chinese spiritual movement called Falun Gong to a right-wing powerhouse whose Facebook following eclipses that of reactionary heavyweights like Breitbart and The Daily Wire. The company managed such a feat by spending millions of dollars on Facebook ad buys. (It also used more deceptive tactics that got it banned from advertising on the platform.) In the final year of the Trump administration, Epoch became a favored media outlet, scoring exclusive interviews with media-allergic Cabinet members and getting priority over more reliable outlets in the White House briefing room ahead of the election.

Like its pro-Trump media peers, Epoch and its associated pages pushed countless specious voter fraud claims through its channels on social media. Whether it was publishing debunked claims about voting machines switching votes from Trump to Biden in the Rust Belt or selectively edited security videos that supposedly showed ballot-counting shenanigans, Epoch eagerly amplified even the most harebrained of voter fraud conspiracy theories to its audience of millions on Facebook. (Meanwhile, YouTube recently demonetized Epoch’s channels for promoting “Stop the Steal” content -- though the platform’s policy has been applied with mixed success.)

All in all, between Election Day on November 3 and the Capitol insurrection on January 6, Epoch and its affiliated pages posted about Dominion Voting Systems more than 200 times. The network was especially prolific in December: 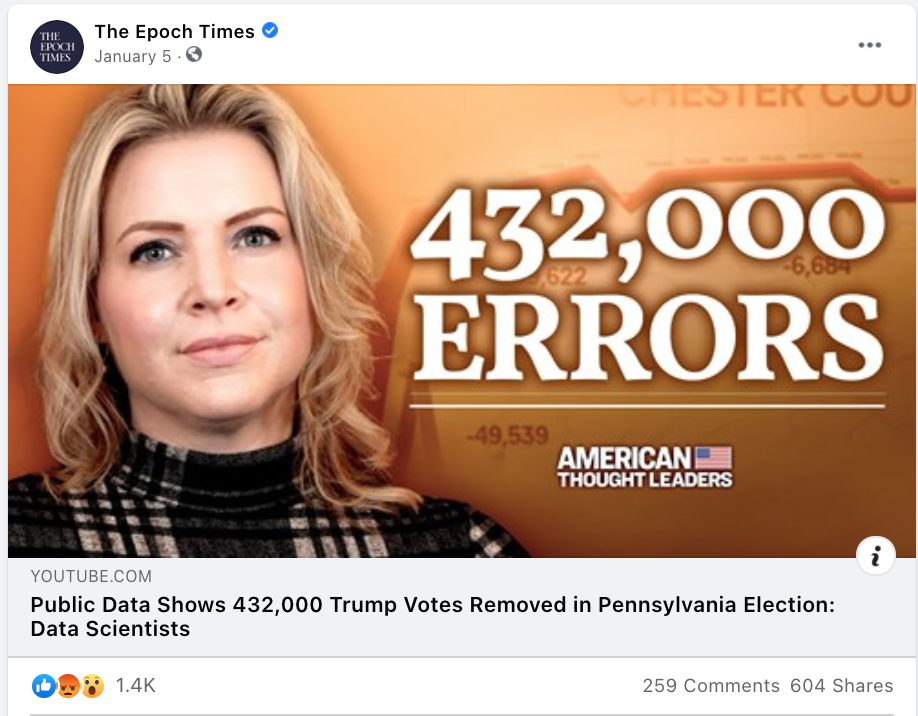 With Facebook’s help, Epoch and NTD provided an enormous platform for “Stop The Steal” rally organizers and others trying to overturn the election

Shortly after the end of the election, pro-Trump influencers began hundreds of online “Stop the Steal” groups to spread election misinformation across social media platforms. That effort was accompanied by dozens of so-called “Stop the Steal” rallies across the country, where Trump supporters harassed and bullied public officials in an effort to thwart democracy.

In the wake of the January 6 insurrection, Facebook announced the company would crack down on “Stop the Steal”-related election misinformation. But as Media Matters has repeatedly shown, that initiative has done little to stem the spread of election misinformation on the platform. Earlier this month, Facebook’s Monika Bickert reiterated that it is still the company’s policy to remove all “Stop the Steal” content from its platform.

Yet Epoch and NTD appear to have successfully avoided Facebook’s narrow enforcement of this standard by omitting the phrase “Stop the Steal” in their posts, even as they promoted the same election lies that ignited the ransacking of the U.S. Capitol.

In addition to promoting “Stop the Steal” events and organizers on Facebook, Epoch and NTD pages frequently turned to serial bad actors like Trump’s conspiracy theory-addled attorneys Rudy Giuliani, Sidney Powell, Lin Wood, and Mike Lindell as supposedly expert sources on the election. They all sang the same tune: The election was stolen and Trump would be inaugurated for a second term despite a significant electoral loss.