“Stop The Steal” organizer Ali Alexander may have been banned from Instagram, but his far-right media startup Culttture remains active and available on the platform, where it is posting prohibited content.

Social media platforms are banning Alexander for his role in the January 6 rally-turned-deadly-insurrection at the U.S. Capitol. According to Politico, Alexander claimed responsibility for the Washington, D.C., rally preceding the storming of the Capitol, saying before the event, “I was the person who came up with the Jan. 6 idea.”

The Washington Post reports that “authorities say they could ultimately arrest hundreds as the country seeks accountability” for the insurrection, and Congress recently opened an investigation on the attacks. The insurrection caused five deaths, the spread of COVID-19 to multiple members of Congress, and other destruction. Twitter, Facebook, and Instagram have all permanently banned Alexander.

But Alexander is listed as the publisher of Culttture, which is still active on Instagram, and has previously directed his followers on Telegram to follow its account. 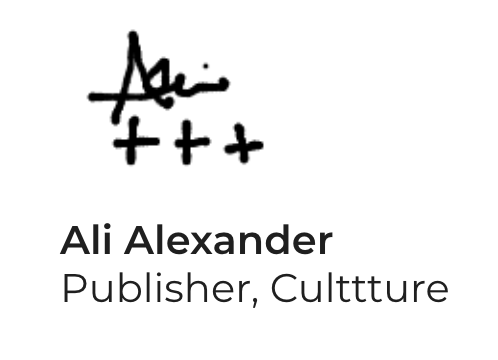 The Culttture account went private on Instagram in the days following the Capitol insurrection, but it has since been reset to public. Based on Culttture’s comments in response to messages from followers, it is clear that the outlet was expecting a ban; it even admitted to making a preemptive ban-evasion account. 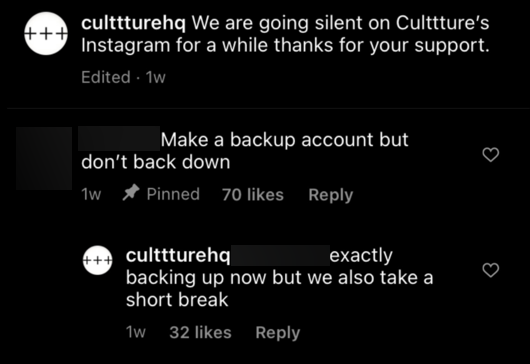 Culttture’s fears of removal makes sense, since much of the account’s content appears to violates the Instagram’s Community Guidelines. The account is helping banned far-right figures and networks circumvent Instagram’s rules and distribute prohibited content to their followers, and it’s a major peddler of COVID-19 and election misinformation that is supposedly banned by Instagram.

As of May 2019, Instagram had committed to removing “any content containing Infowars videos, radio segments, or articles.” Yet Culttture regularly posts Infowars segments in support of the network. The Culttture account also regularly shares content from Alex Jones and Laura Loomer, two far-right figures who were banned from the platform in 2019. 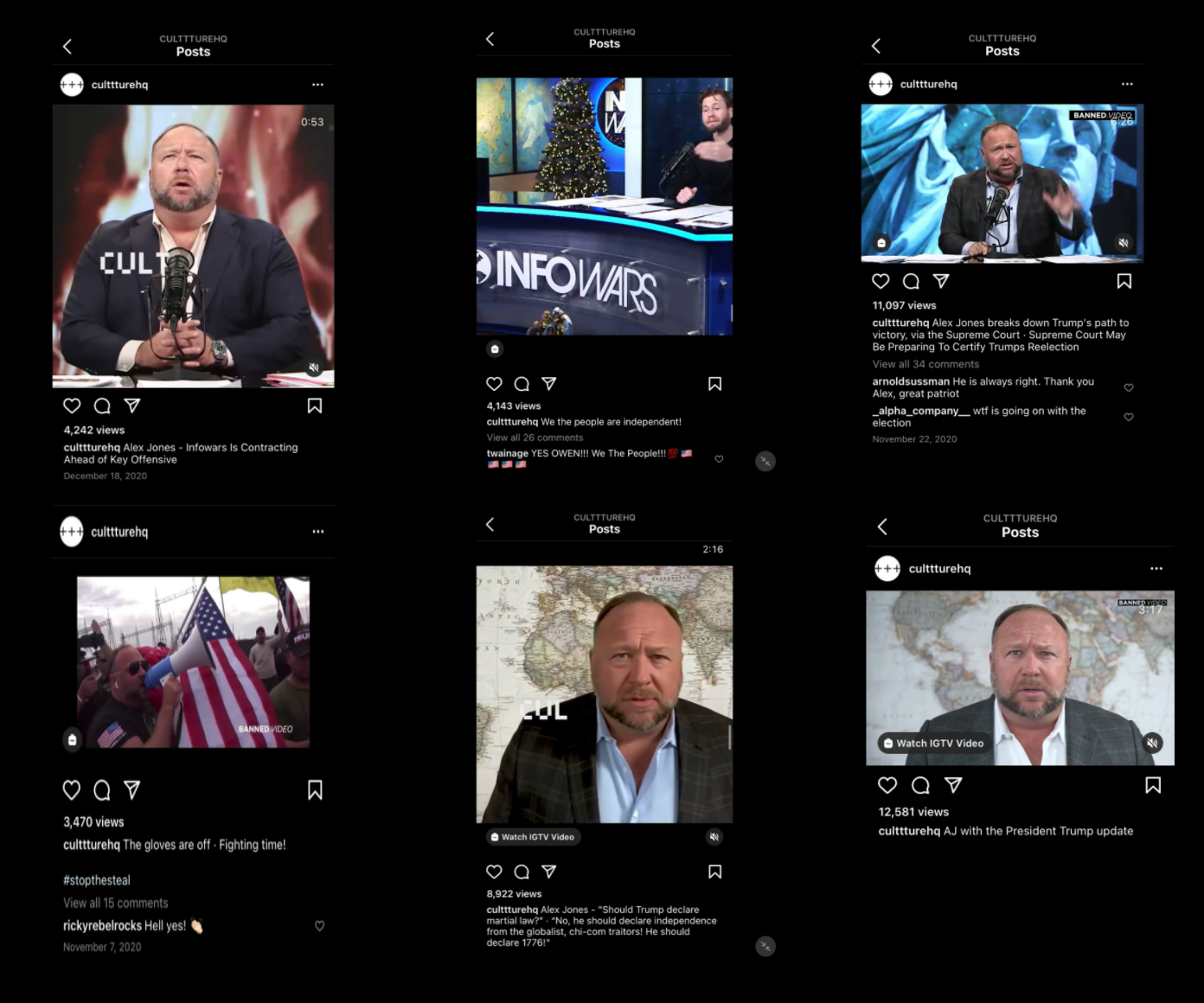 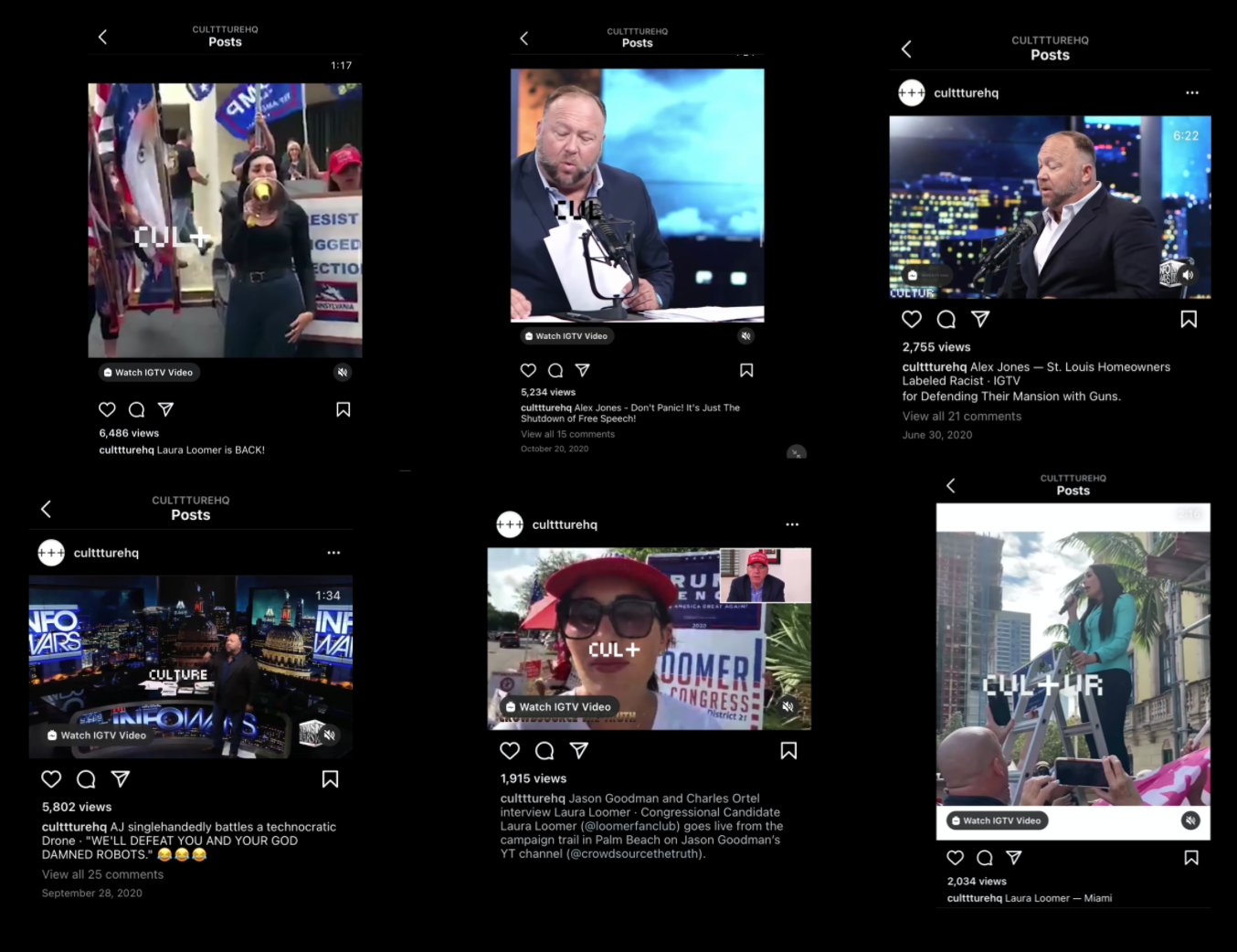 Culttture uploaded the entire Plandemic video to its IGTV

Culttture also regularly spreads COVID-19 misinformation. It has also posted the entirety of the Plandemic conspiracy theory video to its Instagram TV (IGTV).

In Plandemic, conspiracy theorist Judy Mikovits wrongly claims that Dr. Anthony Fauci “manufactured” COVID-19, that a coronavirus vaccine could “kill millions,” and that wearing masks “activates your own virus.”

These claims could put Instagram users in real danger, which Instagram claims it's trying to prevent in the company’s specific COVID-19 update. Facebook, Instagram’s parent company, banned the Plandemic video in May. 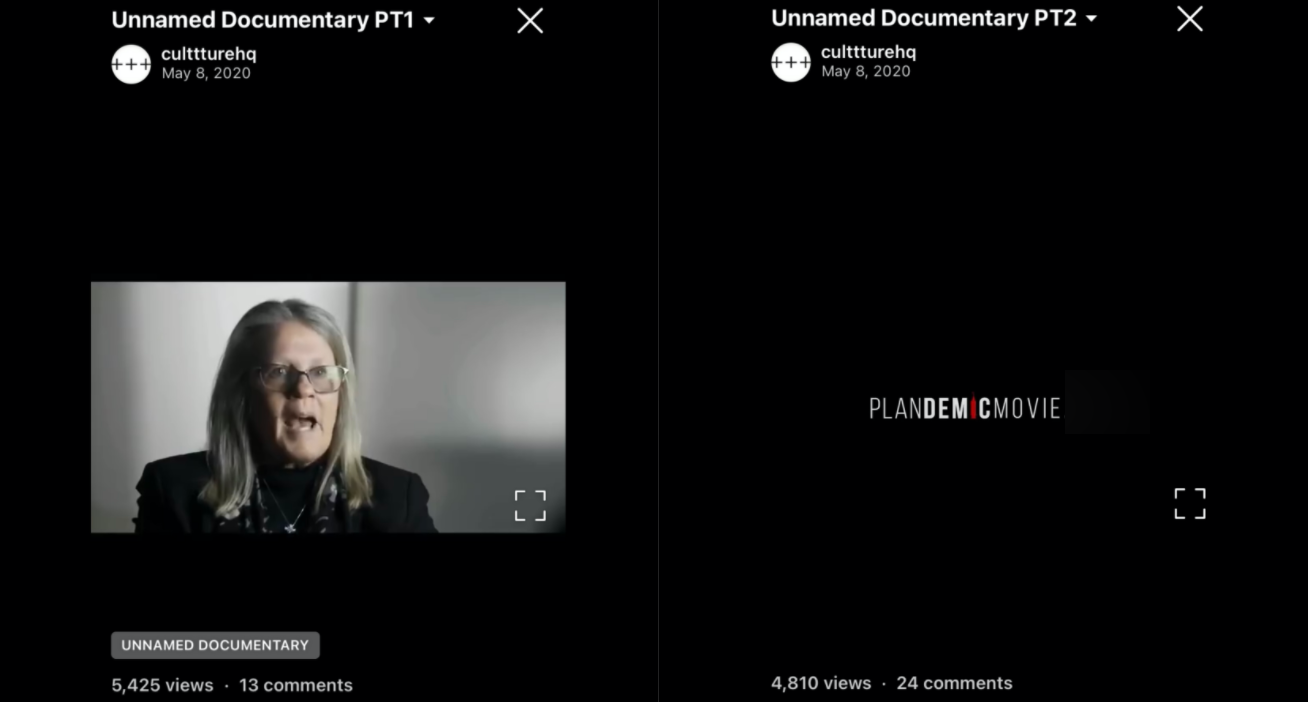 Culttture promoted election misinformation that led to the Capitol insurrection

Culttture repeatedly promoted Alexander's “Stop The Steal” movement that led to the January 6 riot at the Capitol. This content should be prohibited under Instagram’s election misinformation policies, as “Stop The Steal” relies the unfounded claim that the election was stolen. 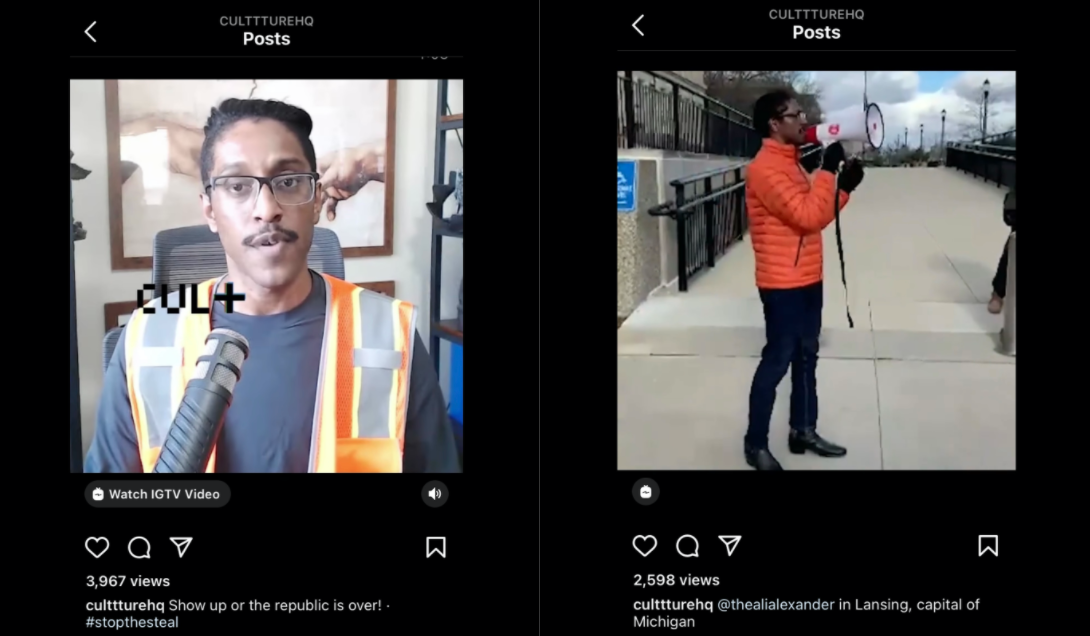 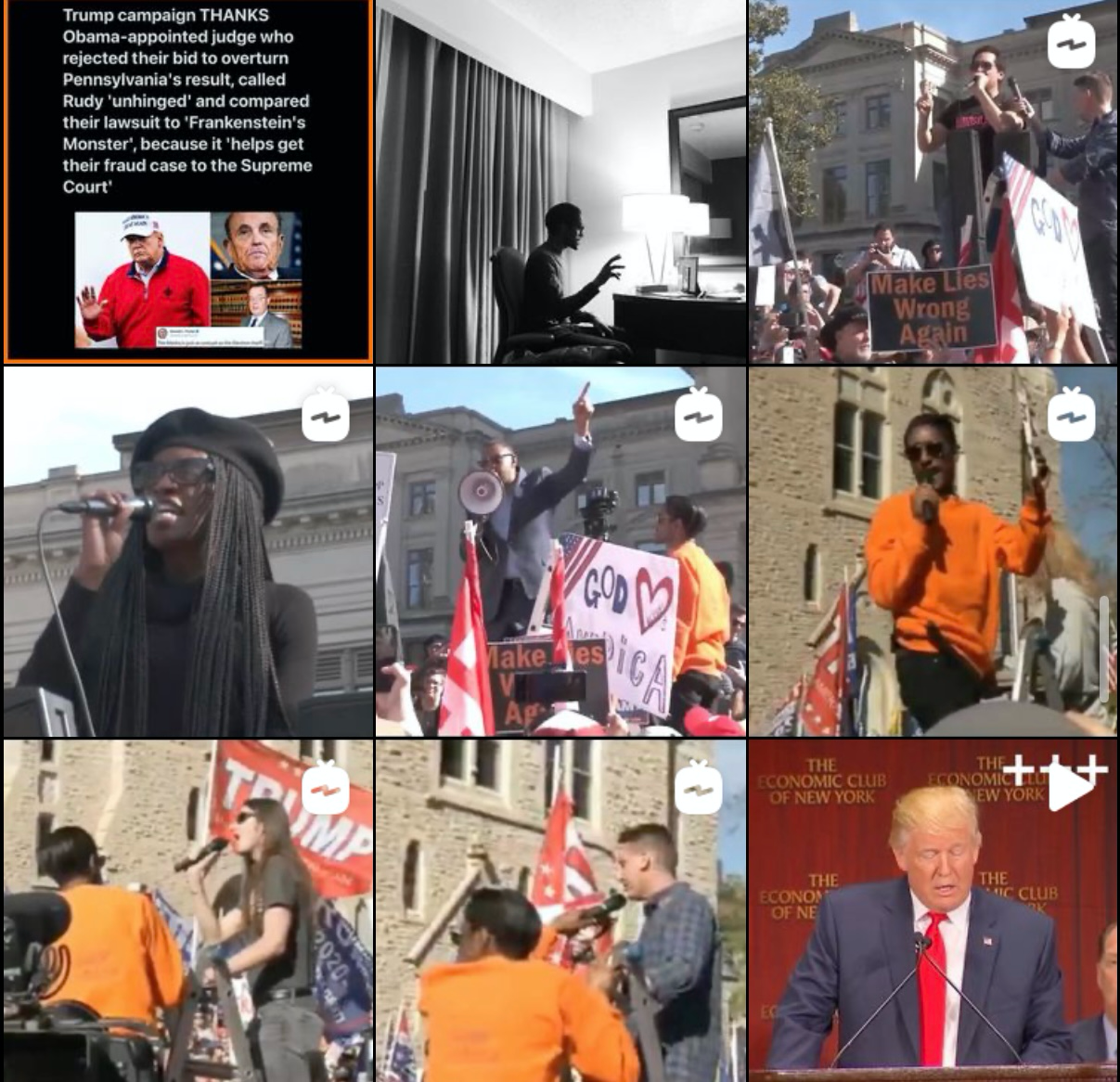