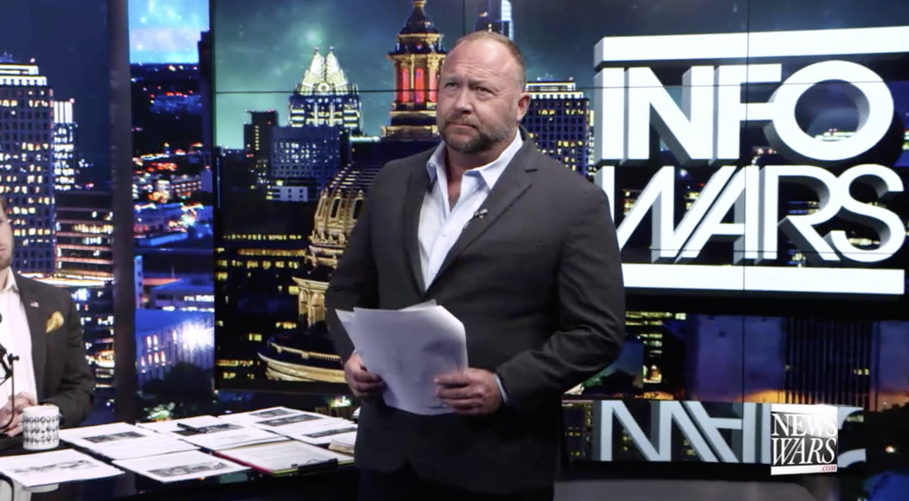 As scientists race to develop a vaccine against the novel coronavirus, far-right conspiracy theorist and anti-vaxxer Alex Jones is urging his substantial audience to not take the yet-to-be-developed vaccine when it becomes available. In recent weeks, Jones has also claimed to have taken his conspiracy theories about the coronavirus and his attacks on vaccine-proponents Bill Gates and Dr. Anthony Fauci to White House advisers with the hope of influencing President Donald Trump, who himself has promoted false claims about vaccines and has praised Jones’ “amazing” reputation.

Public health experts have emphasized the importance of developing a vaccine against the novel coronavirus in order to protect the world’s population and allow public health orders promoting social distancing to be safely relaxed or ended. As Saint Louis University infectious disease researcher Sarah George explained to Popular Science, “We’re not going to get this virus under control until either we get a vaccine or it infects 80 or 90 percent of the population, and the latter is an outcome we don’t want because a lot more people will die.”

Jones’ attempts to damage public perception around a forthcoming coronavirus vaccine pose a danger to public health. And he is increasingly able to spread his message through his recently launched online streaming platform banned.video, where dozens of videos from his Infowars outlet and affiliated far-right personalities are posted each day, routinely garnering hundreds of thousands of individual views. Jones also continues to broadcast his show throughout the U.S. via terrestrial radio. Recent polling indicates that many Americans are susceptible to conspiracy theories about the development of a vaccine for the novel coronavirus.

Major social media platforms are primed to help Jones spread his attacks on the novel coronavirus vaccine and its proponents. While social media networks including Twitter, Facebook, YouTube, and Instagram have taken action against Jones in recent years, enforcement remains spotty. In one glaring example, Media Matters recently documented that banned.video Infowars videos containing coronavirus misinformation were widely circulating on Facebook and receiving hundreds of thousands of views on the platform in some cases, despite Facebook’s supposed blanket ban on Infowars content.

Jones summarized his efforts against the novel coronavirus vaccine during his May 14 broadcast of The Alex Jones Show, saying, “Get ready for the vaccine infowar” before citing “big tech companies,” the Bill and Melinda Gates Foundation, and the Clinton Global Initiative as the leaders of a supposed effort to track Americans and create “a million-person army of young, power-tripping leftists to come to your house and take your children from you” in order to intentionally trigger a civil war.

The primary theme of Jones’ attacks on the forthcoming novel coronavirus vaccine are claims that it will be intentionally engineered to reduce the world’s population. These claims make little sense, as the vaccine does not yet exist and there are numerous independent attempts underway to develop it (though in one instance Jones promoted an unfounded claim that “Fauci and the globalists” have actually already created a vaccine that will “attack your testicles”).

For example, during his broadcast referencing the “vaccine infowar,” Jones claimed a “big problem” with upcoming vaccines is that they will include an additive that will attack women’s ovaries, while adding that “these new vaccines just so happen to attack your testicles as well -- oh, and so does COVID-19.” Jones, who previously claimed that the dietary supplements he sells provided a benefit against the novel coronavirus, then touted supplements as a preventative against harms the new vaccines would supposedly cause.

During a May 13 broadcast, Jones connected his attacks on vaccine development to Gates, a major focus of Jones’ conspiracy theories whose foundation is funding efforts to create a novel coronavirus vaccine. Jones said that “a lot of folks are going to die, a lot of folks are going to get paralyzed” by a coronavirus vaccine, and claimed, “They’re not going to give you some weak, soft kill this time, you’re going to get hurt real bad.” Discussing Gates and a vaccine, Jones said: “So how could he patent it? Release a biological weapon version that is a souped up cold.”

During the same broadcast, Jones also said his “big problem is that I’m not going to do anything violent because they’ve got it all set up to make themselves the victims” before claiming unnamed forces are “coming at you with a deadly vaccine they’re admitting is going to kill a bunch of people.” Jones went on to say that he was fighting violent urges because “people are coming to inject you on purpose to sterilize you and your family, and all these media people are going along with it,” and added that God will take vengeance on Fauci and Gates.

Among his most outlandish statements, Jones has claimed that “forced inoculations” will contain “systems that reprogram the inside of the cell and have the cell start creating new forms inside the body that basically represent the equivalent of stem cells” because globalists “don’t just want to dominate us, they want to rape us, they want to merge with us.”

Building on this theme during his May 20 broadcast, Jones attacked an mRNA vaccine being developed by drug maker Moderna that has promising preliminary results. Jones said of the in-development vaccine: “It’s got fetal tissue in it, and it’s got whole human genomes, and it’s got cancer viruses, and it’s got HCG female hormone in it,” before claiming that it uses nanotech technology that will be used to take over people’s bodies.

Video titles at banned.video often push the notion that a vaccine for the novel coronavirus would be part of a plot by elites to control and depopulate the planet. A few examples include:

President Donald Trump has promoted falsehoods about vaccines -- most notably the false claim that there is a link between vaccines and autism -- but he also frequently touts the potential of a vaccine against the coronavirus, often giving unrealistic timelines for vaccine development that are meant to cast his administration’s handling of the coronavirus crisis in good light.

This creates an uncomfortable situation for Jones to balance his typical propagandistic promotion of Trump with his knowledge that many of his supporters are hardline anti-vaxxers who would not be receptive to Trump’s coronavirus vaccine comments.

To dispose of the issue, Jones turned to a common tactic he uses to make bold denouncements of Trump, only to quickly reverse himself or otherwise move on without further criticism on the topic, settling the issue as a win in the process.

Jones has already used this strategy in regards to Trump and the development of a vaccine for the novel coronavirus. On May 16, Jones issued an “Emergency Message To The President On Forced Vaccinations” that accused Trump of supporting compulsory vaccination, calling the president “a globalist and an enemy of America.” Jones said that his listeners were turning against Trump, explaining, “If Barack Obama would have ever announced that he was forming a domestic military system to carry out inoculations of the population, there would be an uprising.” In the video, Jones gave Trump the opportunity to reverse course. (Other posts at banned.video made similar arguments, including “Learn Why Trump is Mobilizing the Military to Implement Vaccinations” and “Fauci Begins Wearing Mask As President Trump Announces Major Vaccine Push.”)

The next day, Jones reversed himself. During the May 17 edition of The Alex Jones Show, Jones said that he was wrong, that he had relied on lies from mainstream media reports for his information, that Trump’s comments on the military assisting with vaccination had been taken “out of context,” and that he had found a video of Trump expressing opposition to compulsory coronavirus vaccines. Jones added that he had confidence in Trump on the issue because “Trump knows Barron got hurt by vaccines. I know Trump knows that they are not good.” (Jones has previously made evidence-free comments about Trump’s son and vaccines, in 2018 claiming, “Barron was doing great, got a third round of shots when he was two, and, man, it hurt him bad,” before saying, “Autism is up globally 1,000% in the last hundred years.”)

Beyond his attacks on the development of a vaccine for the novel coronavirus, another danger to the public is Jones’ potential influence on the Trump administration regarding coronavirus matters. Jones often claims to be in frequent communication with those around Trump and sometimes the president himself, and there is evidence that Jones’ causes have been taken up by Trump.

During Jones’ May 14 broadcast, he claimed that he “got stuff to the president on Fauci” through Trump advisers and that he is “getting files together for the president and having law firms prepare stuff for him.” Jones elaborated later during his show, citing news reports from 2017 that then-White House chief of staff John Kelly sought to prevent people from showing Trump material from Infowars, but explaining that he was able to get Trump “the information on Fauci and on Gates three weeks ago and you saw immediate action.” Jones said he used “the president’s advisers” and “famous people that are friends with the president” to reach Trump. According to Jones, “It happened again. We influenced the president to make the right move.”