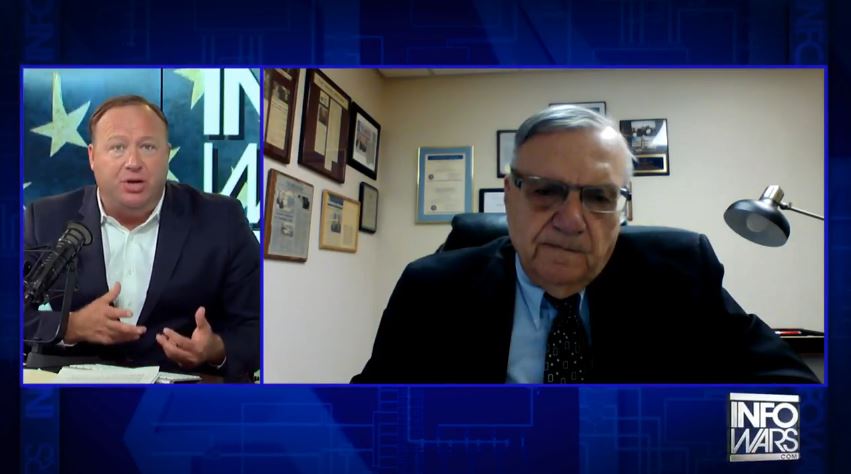 A U.S. District Court judge convicted Arpaio of criminal contempt of court in July. He faces up to six months in jail for his refusal to comply with a court order that said he could no longer direct the Maricopa County Sheriff's Office to engage in racially discriminatory practices against Latinos. Arpaio was defeated in his re-election bid for a seventh term in November.

CNN.com reported today that “the White House has prepared the paperwork for President Trump to pardon former sheriff Joe Arpaio when he makes the final decision to do so.” During an August 22 rally in Arpaio’s home state of Arizona, Trump suggested a pardon was imminent, telling the crowd, “I’ll make a prediction: I think he’s going to be just fine. Okay? But I won’t do it tonight because I don’t want to cause any controversy. Is that okay? All right? But Sheriff Joe can feel good.”

During his August 23 broadcast of The Alex Jones Show, Jones said that he had been told Trump would pardon Arpaio.

Jones teased an “exclusive” interview with Arpaio and described how his case reached Trump’s desk, claiming it started with Infowars Washington bureau chief Jerome Corsi. According to Jones, “It’s Dr. Corsi writing the articles, and it’s Matt Drudge picked him up, and the president saw it in Matt Drudge’s Twitter feed, and then said, ‘Is this true? I haven’t even heard of this on Fox.’ And he called [Sean] Hannity up, and said, ‘Why aren’t you covering this?’”

Since at least April, Corsi has been publishing articles advancing Arpaio’s interests. Corsi wrote an Infowars.com piece in June headlined “Why Trump White House and Sessions DOJ must help Sheriff Arpaio.” On August 18, Corsi published an article that said “Infowars.com has learned the White House counsel has prepared, at the request of President Trump, a pardon for former Maricopa County Sheriff Joe Arpaio that is ready for Trump to sign.”

Arpaio opened his comments on Jones’ show by saying, “I want to thank you, Alex, and your staff, Jerry Corsi, Roger Stone, for bringing this story out and reaching the president. I supported him from, what, two years ago at the same forum that he did yesterday and I’m with him and I’m with him to the end.”

Jones floated the prospect of Arpaio joining the Trump administration during the interview, and Arpaio replied that he wasn’t wasn’t looking to join the administration but said, “If he called me, it would be very difficult for me to turn him down because I will do anything to help him out.”

Corsi, the author of Where's the Birth Certificate?: The Case that Barack Obama is not Eligible to be President, has repeatedly teamed up with Arpaio over the years in an effort to prove the conspiracy theory that Barack Obama was not born in the United States and had released a “fake” birth certificate.

Arpaio also backed Trump during his campaign for president. As the Los Angeles Times explained, Arpaio “had introduced Trump in his home state during the campaign, ridden in his plane and formed what Arpaio described as a warm relationship.”