Update (2/10/21): Following Media Matters’ reporting, TikTok removed the hashtag “#AbsoluteProof” and at least one video containing clips of Mike Lindell’s film. YouTube similarly removed some of the videos with Lindell’s film. However, additional posts promoting the film are still active on both TikTok and YouTube at this time.

Lindell has been a leading voice in promoting dangerous conspiracy theories about the 2020 presidential election (and bankrolling the proliferation of this lie) across right-wing media and social media.

Even though former President Donald Trump’s multiple attempts to overturn the outcome of the 2020 election failed in courts, over 70% of likely Republican voters question the election results. Meanwhile, his supporters continue to push baseless claims of widespread voter fraud. Lindell is one of Trump’s most vocal supporters to promote unsubstantiated election fraud claims and conspiracy theories, and he recently released a film that The New York Times called a “disinfomercial.” In the video, titled “Absolute Proof,” Lindell spent over two hours falsely claiming that Trump won the election, making wild allegations of fraud that have no basis in reality, and railing against “cancel culture.”

Following the release of Lindell’s video on February 5, YouTube and Vimeo removed copies for violating each platform’s election integrity policies, but additional versions of the film are still being uploaded to YouTube. Facebook and Twitter have both labeled posts sharing the film as misinformation and reduced its distribution, with Facebook confirming that the “video has been rated false by one of Facebook’s third-party fact-checkers so it’s been labeled and its distribution is being reduced.” But Media Matters has still found active posts on Facebook, Instagram, and Twitter that have no label, and TikTok has not taken any action against posts with the video, even though the platform claimed on February 3 that it was taking new steps to crack down on misinformation.

Since before the election, social media platforms have claimed that they are trying to stop the spread of election misinformation, but these platforms have failed to adequately implement or consistently enforce related policies. For example, Facebook took minimal action against election misinformation from Trump and his allies on its platforms, allowing users to organize and promote “Stop the Steal” events, such as the January 6 rally that led to the insurrection at the Capitol on January 6. Media Matters and others have documented similar failures of other platforms, such as Twitter, TikTok, and YouTube.

Election misinformation policy: We will attach an informational label to content that seeks to delegitimize the outcome of the election or discuss the legitimacy of voting methods, for example, by claiming that lawful methods of voting will lead to fraud.

“Absolute Proof” is the latest example of Facebook being incapable or unwilling to consistently enforce its policies. Facebook confirmed that the video violates its policy and has labeled Lindell’s posts linking to the film on both Facebook and Instagram as containing false information. But Media Matters has found Facebook and Instagram posts that are not labeled, including posts with links to versions of the video hosted on other websites and alternative platforms, such as Gab and Rumble. These posts are also circulating within private Facebook groups, which have been more difficult for Facebook to moderate and for researchers and journalists trying to hold Facebook accountable to track.

Notable examples of Instagram posts with Lindell’s film include: 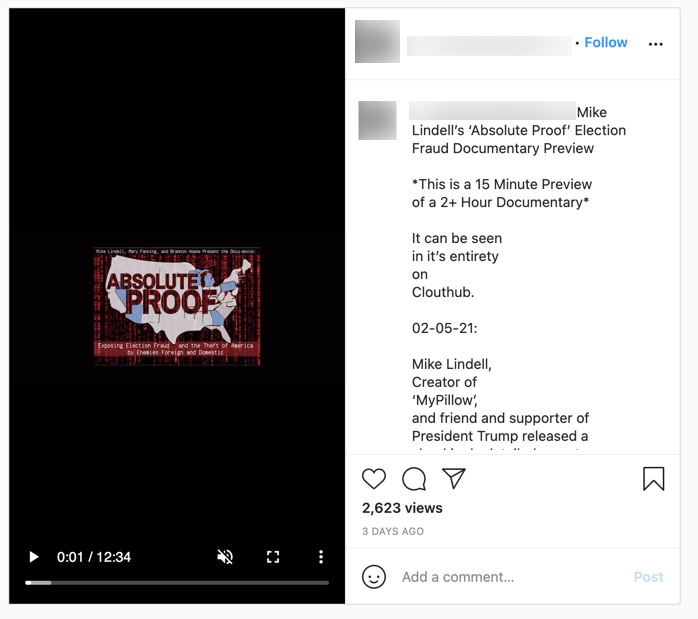 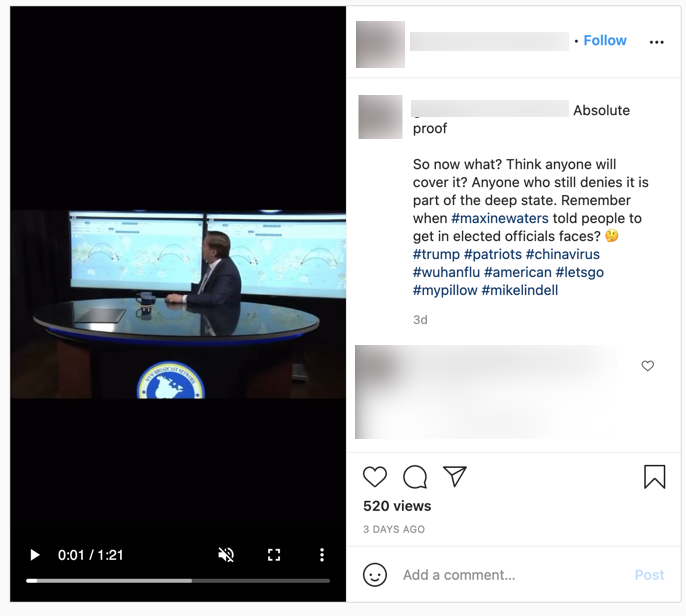 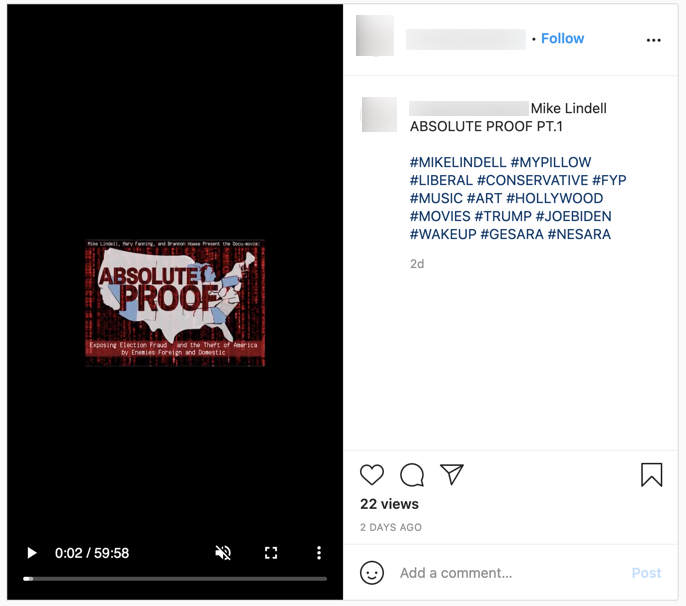 Election misinformation policy: We will label or remove false or misleading information intended to undermine public confidence in an election or other civic process. This includes but is not limited to: disputed claims that could undermine faith in the process itself, such as unverified information about election rigging, ballot tampering, vote tallying, or certification of election results.

Versions of Lindell’s film are also spreading on Twitter. The platform labeled an OAN tweet promoting “Absolute Proof” with a disclaimer: “This claim of election fraud is disputed, and this Tweet can’t be replied to, Retweeted, or liked due to a risk of violence.” 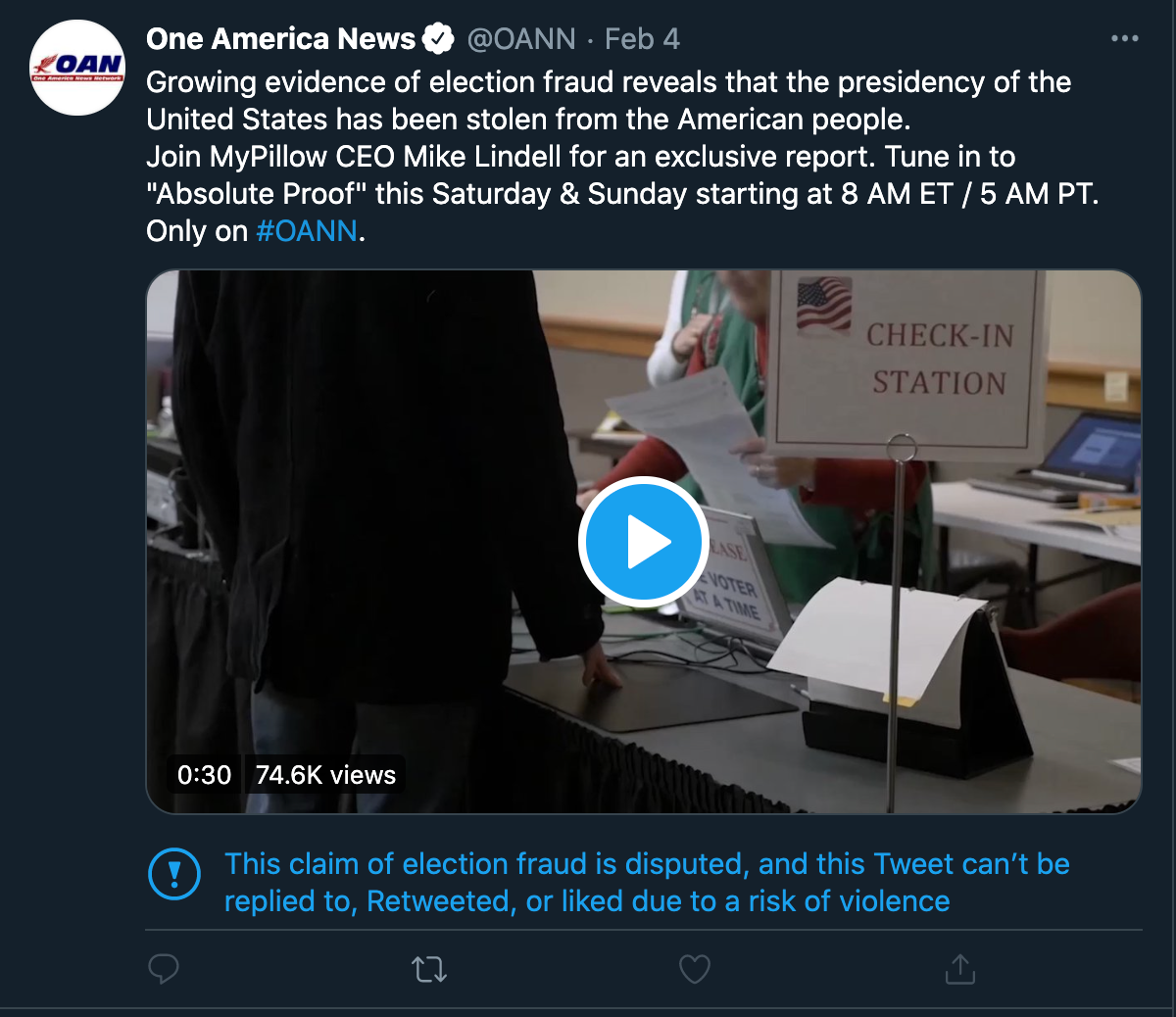 However, this standard of policy enforcement is not consistently applied to all clips of the video. The Twitter hashtag “#AbsoluteProof” displays tweets containing links to the full-length film, as well as unlabeled video clips.

Right Side Broadcasting Network also tweeted a link to the full film multiple times, but Twitter has not applied a label or restrictions on them. 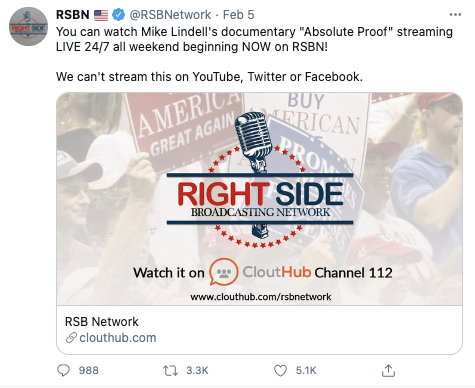 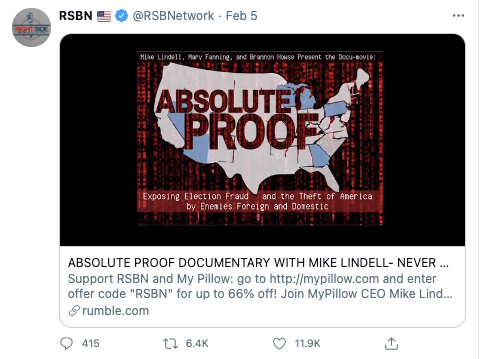 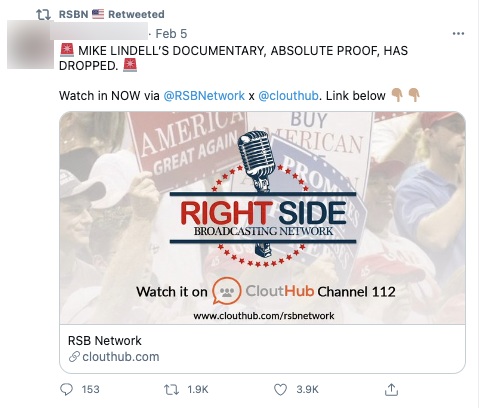 Election misinformation policy: Our Community Guidelines prohibit misinformation that could cause harm to our community or the larger public, including content that misleads people about elections or other civic processes, content distributed by disinformation campaigns, and health misinformation.

Even though it violates TikTok’s election misinformation policy, “Absolute Proof” is swiftly spreading on the platform. The “Absolute Proof” hashtag on TikTok already has nearly half a million views, and all of the top videos promote Lindell’s video. 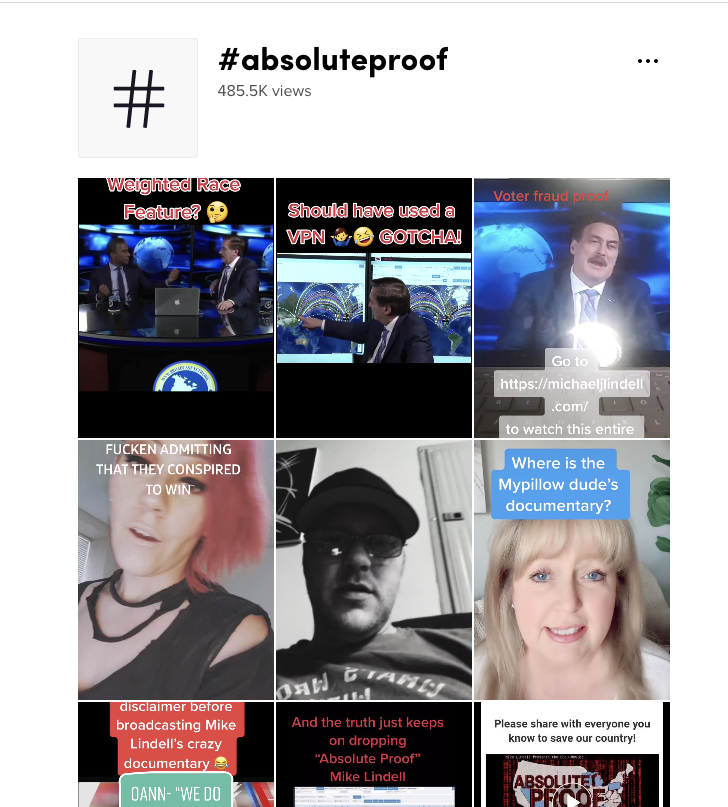 Some TikTok creators are directing users to external websites to view the film in its entirety while others are uploading it in sections.

“Look what I got. … Apparently they’ve been taking down this documentary, so I figured I’d snag it,” said one user. “I’ll post some goodies that I find. And yeah, take that, big tech.” This video has over 190,000 views and the account has over 57,000 followers.

YouTube removed Lindell’s video for violating its policies, but at the time of publication, there are many additional uploads still on YouTube. An advanced Google search for YouTube videos using the phrase “watch absolute proof” uploaded between February 5 and February 8 returned over 270 results.

There also appears to be a coordinated YouTube spam campaign centered around the Lindell film. All of the top results featured a series of screenshots from the film with overlaid text instructing users to click the “link” below to watch. The text slightly varied with each video, but the format and messaging appear uniform. These videos each have thousands of views. 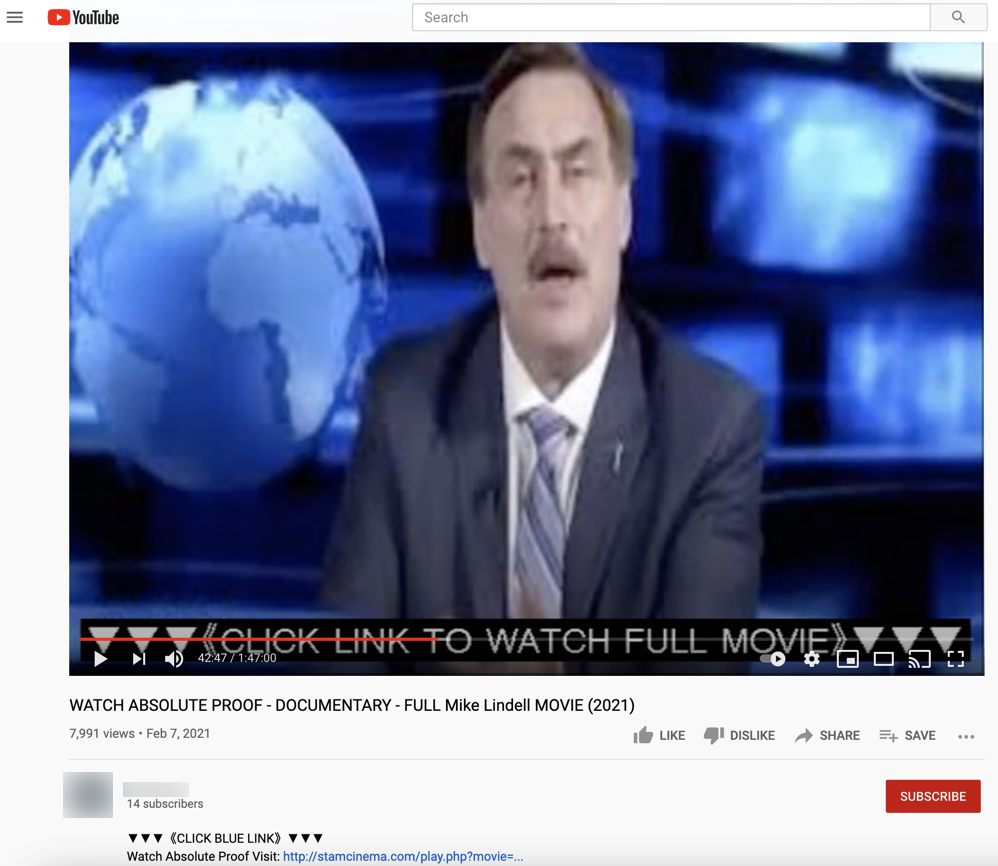 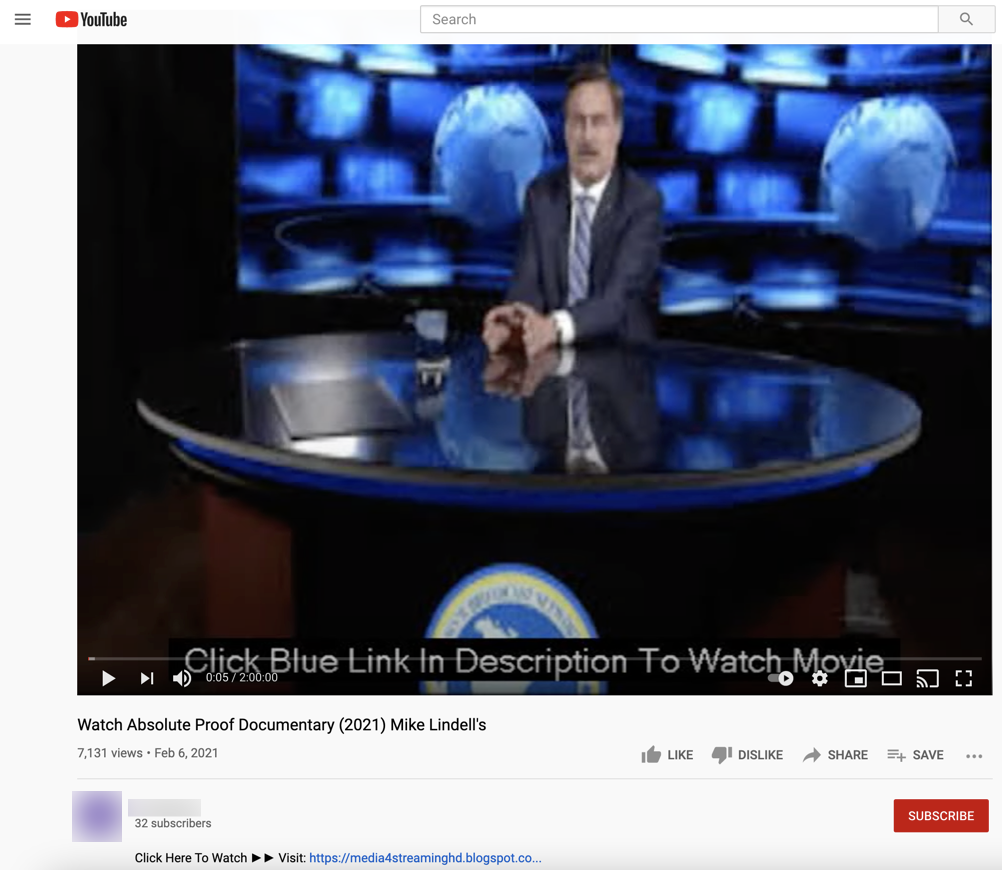 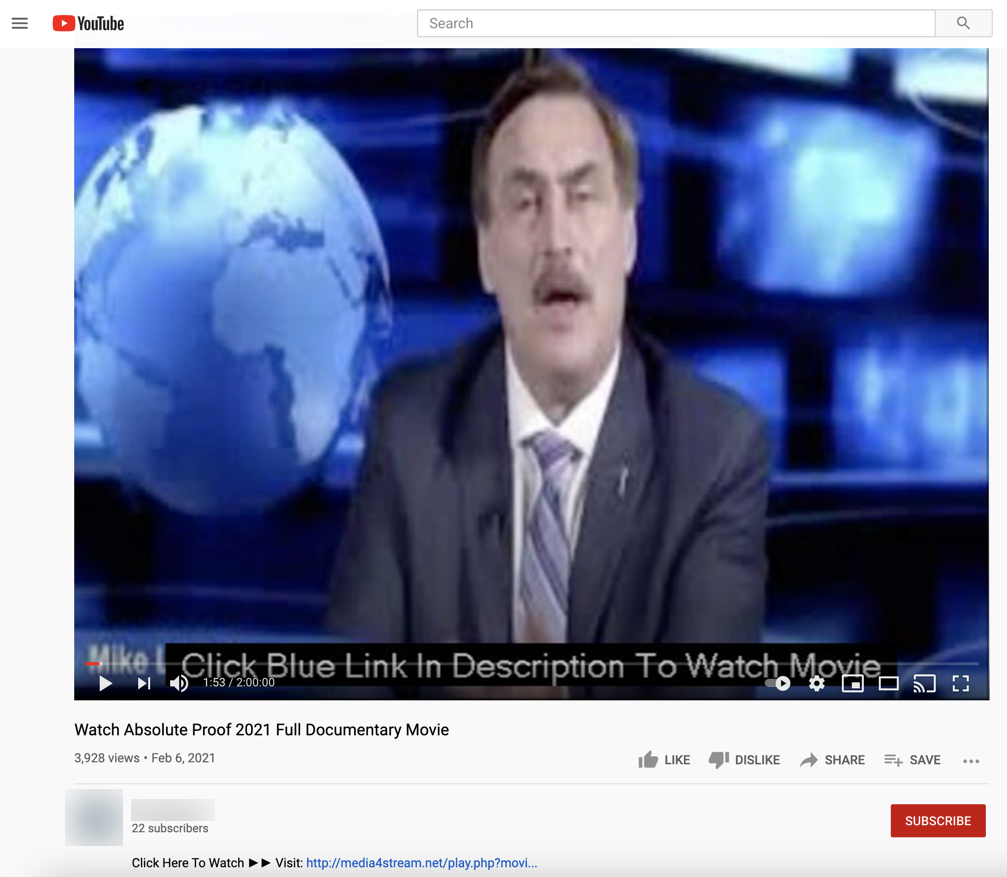