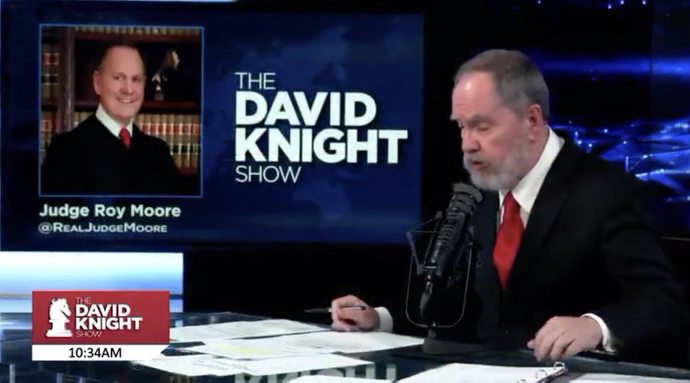 Far-right conspiracy theory outlet Infowars is promoting Roy Moore’s run for an Alabama Senate seat. Moore previously ran for Senate in 2017, losing the race after nine women reported sexual misconduct by him; two of them said they were underage when he assaulted them.

During a 2017 special election to fill a Senate seat vacated by Jeff Sessions, Moore was defeated by Sen. Doug Jones (D-AL) after there were reports of sexual misconduct from nine women, including one who “said that he touched her sexually when she was 14” and one who “accused Mr. Moore of sexually assaulting her when she was 16.” Moore was reportedly banned from a mall in the 1980s after he repeatedly made advances at teenage girls there. As the reports against Moore mounted, many in conservative media rallied around him in a bid to save his candidacy.

Before introducing Moore, Infowars host David Knight said that Moore’s opponent, Jones, is “a guy that does not share Alabama’s values,” claimed he is the “Democrat senator that is currently …  listed as the most vulnerable senator up for reelection in this next election cycle,” and said that “even with all the last-minute dirt that was dumped, he still only won by just over 1%.” Knight said that in the 2020 election, Jones’ choice is whether he wants to be run over by a car or a truck.

Knight went on to say, “Folks, we can never win if we don’t stand up for our principles, and I don’t know anybody who has been more firm on his principles and the foundation of our country and the separation of powers than Roy Moore.” He then promoted RoyMoore.org and Moore’s Twitter handle. Moore's website, which Infowars showed on its broadcast, is a campaign site where supporters can donate, request a yard sign, and volunteer.

Infowars head Alex Jones lied about the sexual misconduct reports against Moore in 2017, telling his audience that Moore was merely being criticized because he “told girls they were purty.” After Moore lost, Jones claimed Democrats stole the election from him by using dead people to vote.

Infowars and Jones frequently use accusations of pedophilia to attack their political opponents. In 2017, while under legal threat, Jones apologized on the air for his role in spreading the false “Pizzagate” conspiracy theory, which had motivated a Jones listener to fire a gun inside a Washington, D.C., pizzeria.