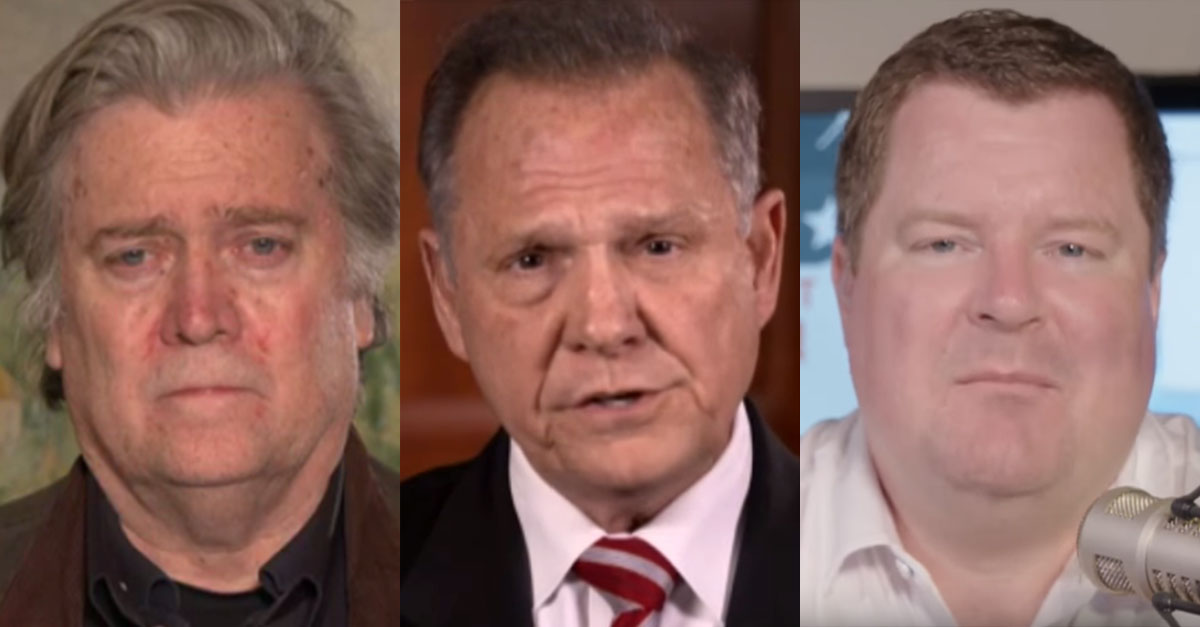 The Washington Post’s explosive investigation into Alabama Republican Senate candidate Roy Moore’s alleged sexual misconduct with underage girls has provided a distressingly clear look at the moral rot that has infested conservative politics. Moore, who stands credibly accused of sexual misconduct by multiple on-the-record sources, nonetheless has powerful figures within the conservative movement defending him, attacking his accusers, or running interference on behalf of his supporters.

Thus we find ourselves in the altogether absurd situation in which influential figures on the right would rather see a reported child molester elected to the U.S. Senate than risk losing a seat to the Democrats.

Conservative blogger Erick Erickson, who frequently is provided space to opine in the op-ed pages of major newspapers, wrote a blog post this morning explaining why he can’t blame Moore’s supporters for sticking with (and voting for) the candidate even in the face of the “damning” evidence. Erickson understands that impulse, he writes, because he sympathizes with those voters’ perception that “the left” is “out to get them.”

Per Erickson’s explanation, Alabama Republicans are under assault by liberal efforts to protect reproductive rights, enact gun control in the aftermath of mass shootings, and expand LGBTQ rights, so they can be forgiven for feeling that their only recourse is to send alleged sexual predator Roy Moore to the Senate to represent them. After all, Erickson rationalizes, the reported pedophile “is the only one standing with them.”

As for Erickson himself, he writes that while he personally does not want Moore to serve in the Senate, he nonetheless still wants Moore to win election and then announce that he’ll immediately resign so that Alabama’s GOP governor can appoint some other Republican to the seat. It’s a cockamamie political fantasy that, if it came to fruition, would inevitably lead to suspicions of corruption, patronage, and backroom dealing. That’s precisely what happened when incumbent Republican Sen. Luther Strange was appointed by disgraced former Alabama Governor Robert Bentley earlier this year. Funnily enough, when Erickson endorsed Moore ahead of his runoff primary election against Strange, he railed against the “crooked” deal that resulted in Strange’s appointment.

Steve Bannon and his Breitbart.com lackeys have blurped up a more straightforward defense of Moore. They’ve settled on a two-pronged approach that seeks both to minimize the heinousness of the Alabama Republican’s alleged behaviors and discredit the accusations as the product of an anti-Moore conspiracy.

It’s important to point out here that Bannon didn’t actually challenge the Post’s reporting -- in fact, he compared it explicitly to a different Post exclusive about Trump’s sexual misconduct that was backed up with video evidence. Bannon was just lazily implying that there’s some sort of nefarious conspiracy afoot and allowing conservative antipathy for the “liberal media” stand in for proof.

Bannon farmed out the dirtier work of the pro-Moore defense to his employees. News of the Post’s scoop first surfaced when the Moore campaign fed the details of the story to Breitbart in an attempt to get ahead of the still-unpublished story. Breitbart.com obliged the Moore campaign and helped the candidate run damage control by framing its story around Moore’s denial of the pedophilia reports and attacking the Post as a partisan, bad-faith actor. Breitbart editor Joel Pollak then went on MSNBC to excuse Moore’s behavior and reframe some of his alleged sexual relationships with teenagers as “perfectly legitimate.”

So I guess the question is what’s to be done now that we know there are prominent conservatives out there who would rather make excuses for a reported pedophile than see a Senate seat switch parties. I think the answer has to be: Don’t forget that this happened.

The next time a newspaper considers another “Steve Bannon is a political force of nature” profile, its reporters and editors should remember that he and his publication ran interference on behalf of a Republican accused of molesting children. The next time an op-ed page editor considers handing column space to Erick Erickson so he can bemoan political divisiveness, they should recall that he also rationalizes conservative support for a candidate whose alleged sexual misconduct renders him unfit for office.