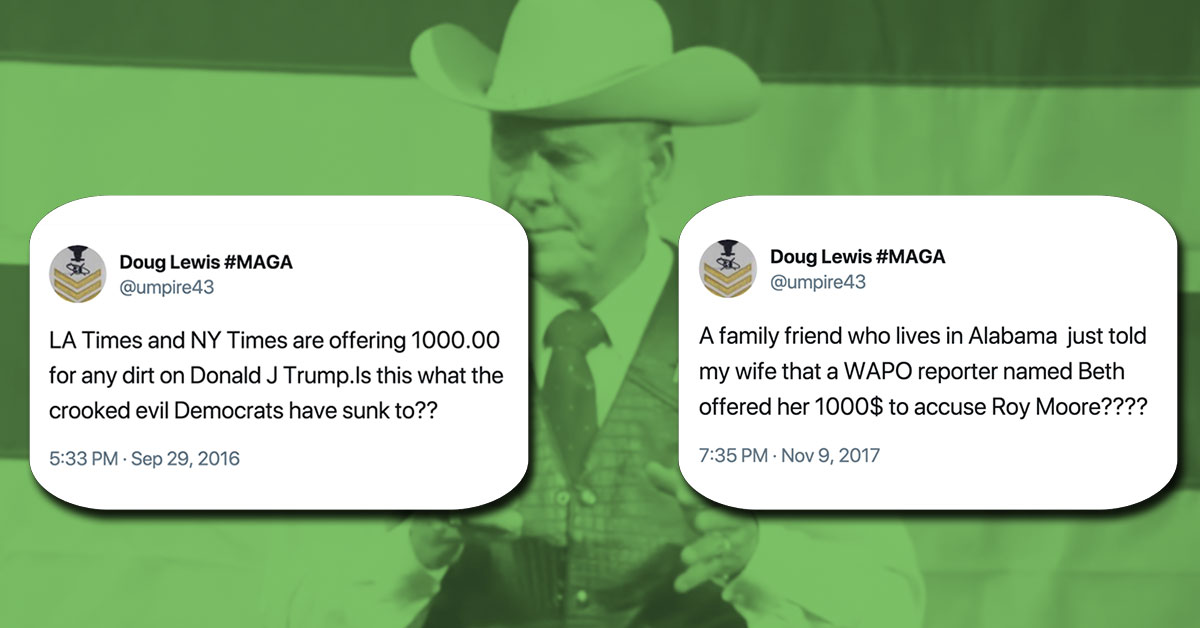 Right-wing websites are hyping the absurd claim of a user on Twitter that The Washington Post offered to pay an Alabama woman to say that Alabama Republican Senate candidate Roy Moore had engaged in sexual misconduct.

The account -- which goes by the name “Doug Lewis #MAGA” and has more than 17,000 followers -- previously made a nearly identical unfounded accusation involving The New York Times and the Los Angeles Times in September 2016.

The Washington Post recently reported that Leigh Corfman said Moore molested her when she was 14 years old and he was 32. Three other women told the Post that “Moore pursued them when they were between the ages of 16 and 18 and he was in his early 30s.” The report was based on conversations with more than 30 sources who knew Moore between 1977 and 1982, the time in which the reported misconduct occurred.

In an embarrassing attempt to defend Moore from these reports, some far-right websites began promoting an allegation that the Post offered to pay a woman to “accuse Roy Moore,” which Lewis sourced to an anonymous “family friend” who supposedly told his wife about it:

A family friend who lives in Alabama just told my wife that a WAPO reporter named Beth offered her 1000$ to accuse Roy Moore????

The Gateway Pundit, a disreputable website that frequently promotes hoaxes and employs far-right trolls, published an article based solely on Lewis' claims with the headline “Alabama Woman Claims WaPo Reporter Offered Her $1000s to Accuse Roy Moore of Sexual Abuse!!” While Hoft noted it was “just a report at this time,” he explained it is “HUGE news if true.” Infowars.com, which is operated by leading far-right conspiracy theorist Alex Jones, also ran with the report in an article bylined by reporter Kit Daniels that asked, “Accusations against Moore already debunked?”

The evidence-free allegation is also being promoted by fake news site TruthFeed. Another site that publishes fake news, Prntly, previously used tweets from the same account to claim voter fraud in New York.

“Doug Lewis #MAGA” has offered no evidence to support the claim. Furthermore, the account made a similar claim in 2016, writing in a tweet that “LA Times and NY Times are offering 1000.00 for any dirt on Donald J Trump.Is this what the crooked evil Democrats have sunk to??”

LA Times and NY Times are offering 1000.00 for any dirt on Donald J Trump.Is this what the crooked evil Democrats have sunk to??

The account also frequently changes patterns of speech in the tweets it posts:

I am Former Seal, 3 yrs SS,2 yrsSD CC for all 50 states.I will also offer free bodyguard for any elector near me.

Anyone come to my home in need and I will feed you and offer seasonal clothing and comfort.Come to harm my family I will shoot you dead.

May I also offer in Nomination for VP Condoleeza Rice to Trump both the SOS and Woman cards https://t.co/d9Af8Gqxsu