The New Jersey gubernatorial election, held on November 2, became the target of misinformation about voter fraud and election integrity even before Democratic Gov. Phil Murphy was declared the winner. As soon as it became clear that the race was going to be closer than what many expected, multiple election misinformation narratives started spreading across social media platforms, including in major Facebook groups.

Unsurprisingly, there has been almost no moderation or fact-checking of these claims from any platforms, including Facebook -- which has a history of allowing election misinformation to flourish, despite its promises and efforts to halt it.

The narratives, which spread on Facebook, Twitter, and alternative platforms -- Gab, Telegram, and Patriots.win -- ranged from calls for the GOP to send “an army of lawyers” to New Jersey and fight Democrats' alleged “election fraud” to accusations that early double-counted ballots for Murphy in Hudson County as a result of a now-fixed counting issue were evidence of Democrats being caught cheating.

Particularly prevalent narratives included baseless claims that there was a late-night flip in vote totals in Bergen County; that 56 voting machines that were shut down in Essex County were linked to election fraud; that two women being unable to select Republican candidate Jack Ciattarelli’s name on voting machines showed there was fraud; and that trash bins outside the Gloucester County Board of Elections were filled with blank and shredded ballots.

After the results showed a slim Murphy victory, the narratives spread more widely on the platforms and were used to call for an audit of the election.

Here are examples of those claims:

Baseless claim: There was a fraudulent late-night flip in vote totals in Bergen County

In the early hours of November 3, users on Facebook and other platforms started posting screenshots claiming there was an unexplained “flip” in vote totals in Bergen County from majority Republican to Democratic votes, after the county had already reported that 100% of the precincts were in. But this claim was debunked, as 100% of precincts reporting does not mean 100% of the vote has been counted, and mail-in ballots were still being counted.

Still, users claimed 40,000 votes were stolen from Ciattarelli, which they called proof that the Democrats had “rigged” the election. And Facebook has allowed the content to remain on the site, failing to even label most of the posts as false or misleading. The allegations also spread through the comments sections of posts, which Facebook consistently fails to properly moderate. 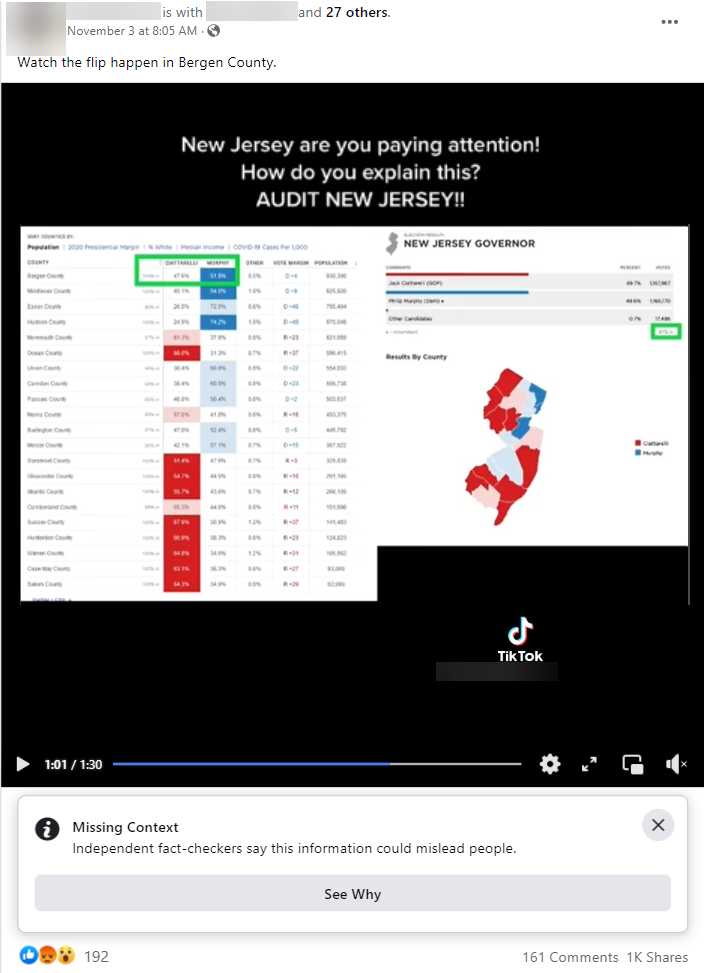 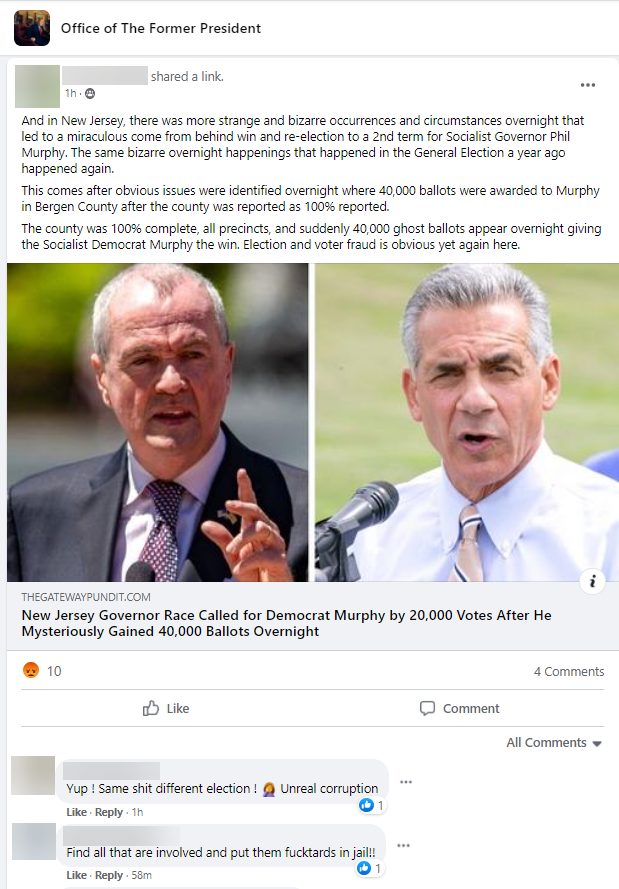 In addition to Facebook, these claims were popular on a variety of other platforms, including Twitter and Patriots.win, with no fact-checking. 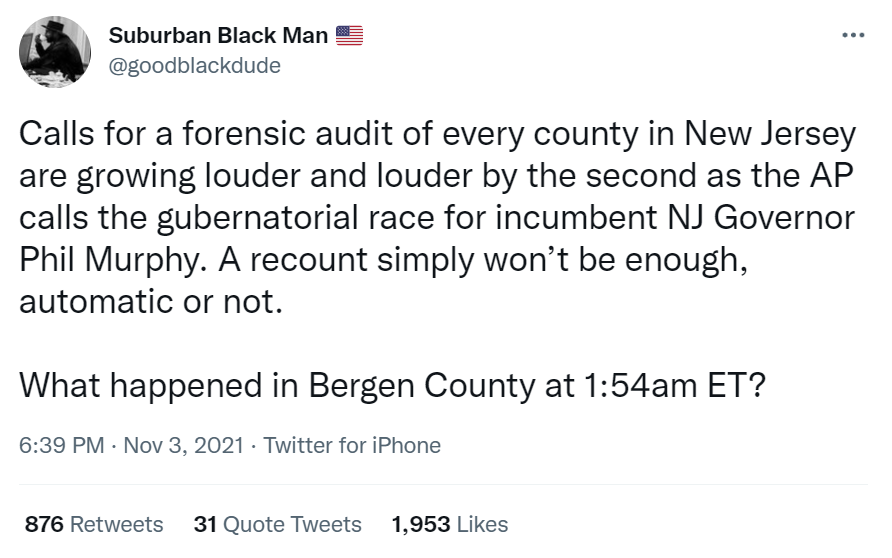 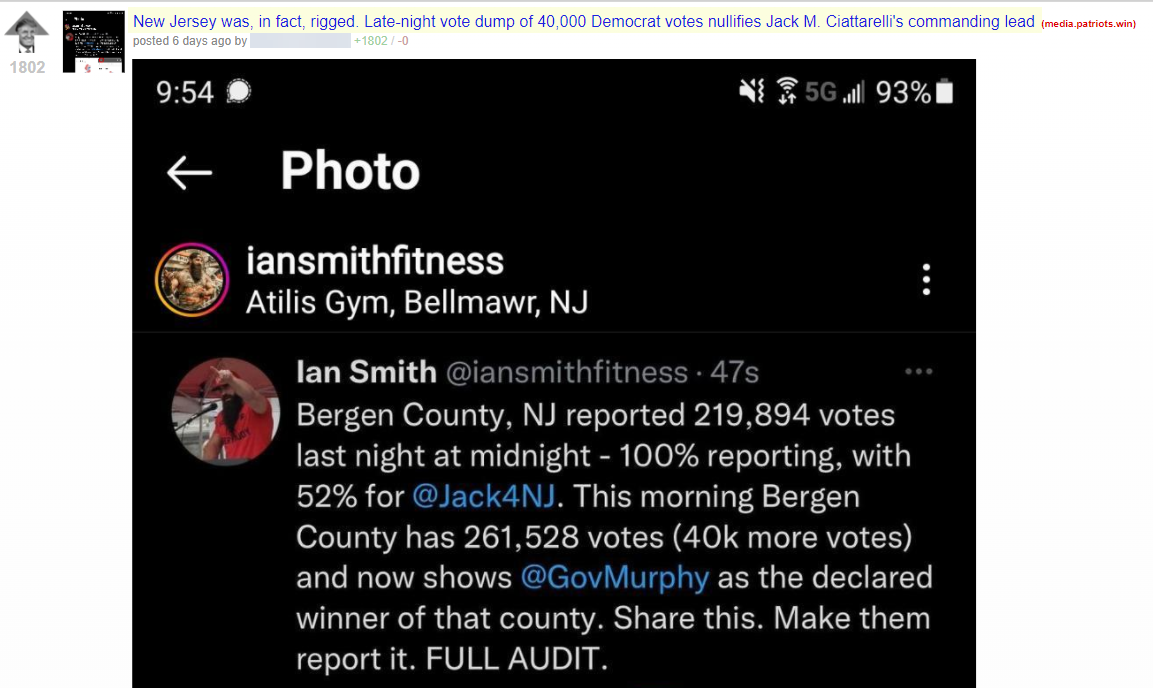 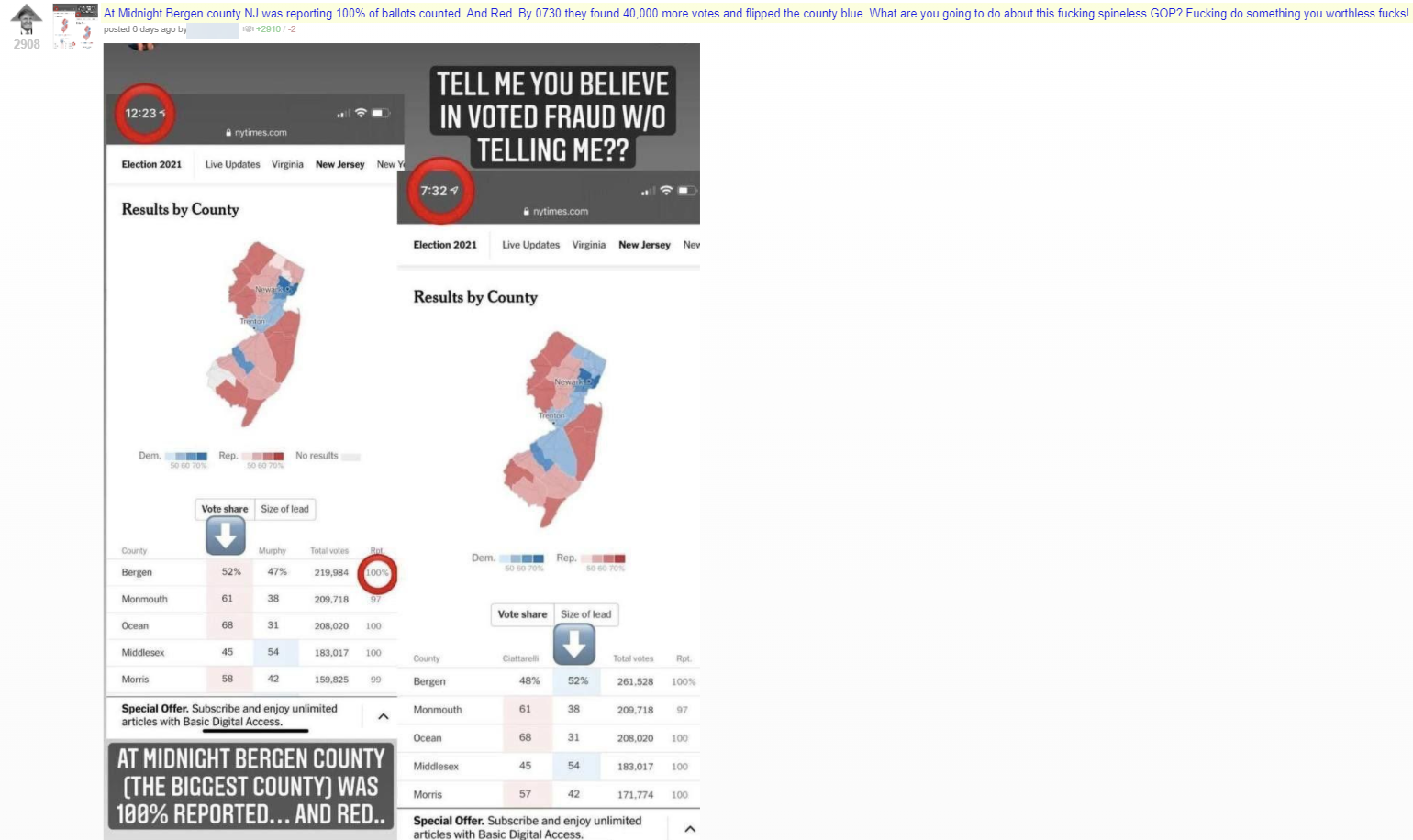 Baseless claim: The 56 voting machines shut down in Essex County are linked to election fraud

After Murphy was declared winner, social media users baselessly claimed that 56 voting machines were shut down for nefarious reasons. Before the votes were counted in Essex County, there were machines that were shut down erroneously, but officials impounded the machines and are working to rectify the mistake made by poll workers in the predominantly Democratic county.

Regardless, users on Facebook, Twitter, Telegram, and GreatAwakening.win claimed that this is proof of election fraud, and the platforms have not labeled the majority of these posts with accurate information or noted that the posts are missing context. 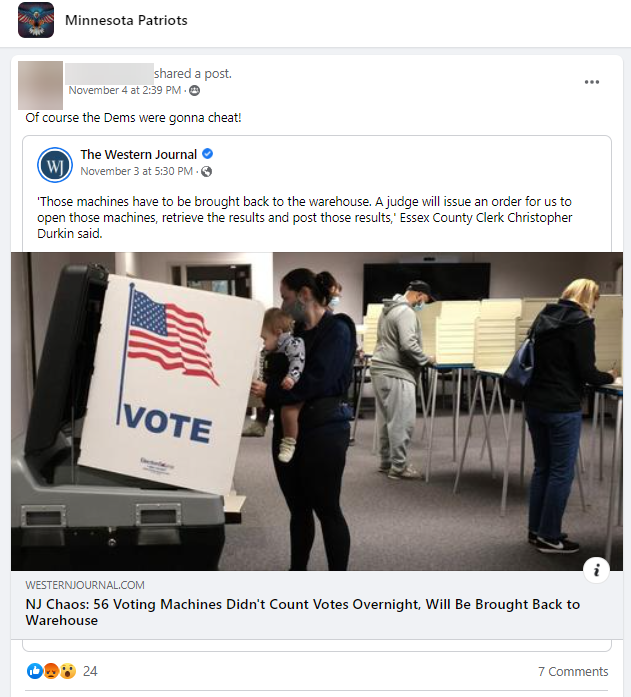 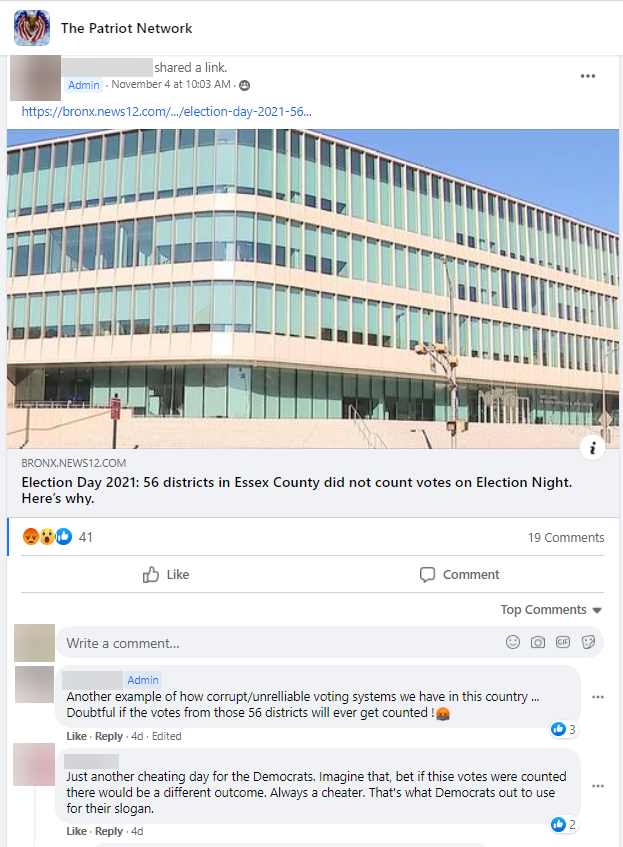 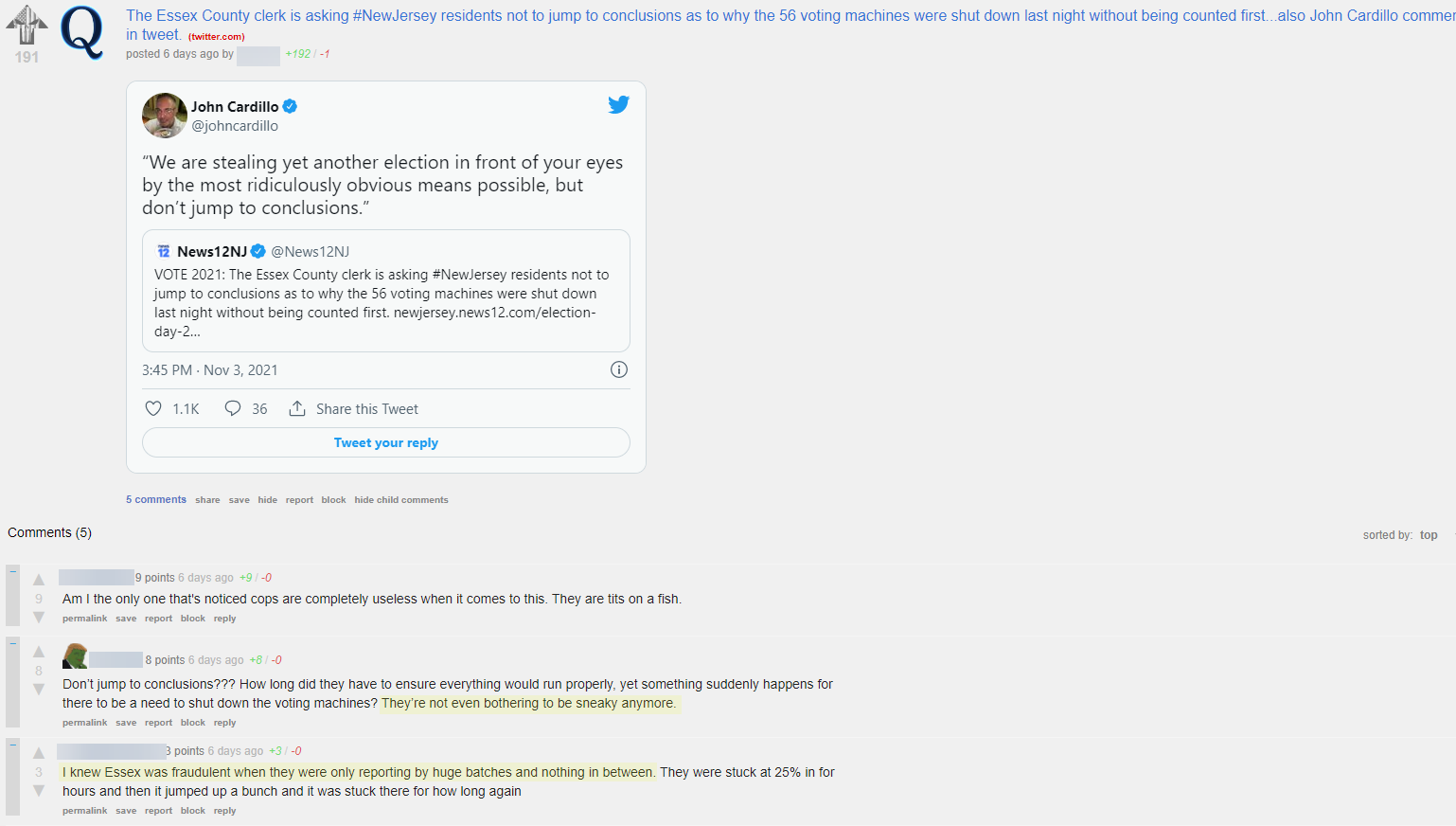 A third narrative that has proliferated across Facebook is based on two videos of voters (one in Monmouth County and the other in Bergen County) attempting to select Ciattarelli’s name on a voting machine but appearing to be unable to do so. Many users branded this “actual video evidence” of voter fraud, with some even calling it “treason.” These claims have been debunked; election officials confirmed the machines had technical issues, but they noted that the voters were either redirected to another machine or told to press harder. The videos posted on Facebook, Twitter, Rumble, and Bitchute lack this context and haven’t been labeled by the platforms. 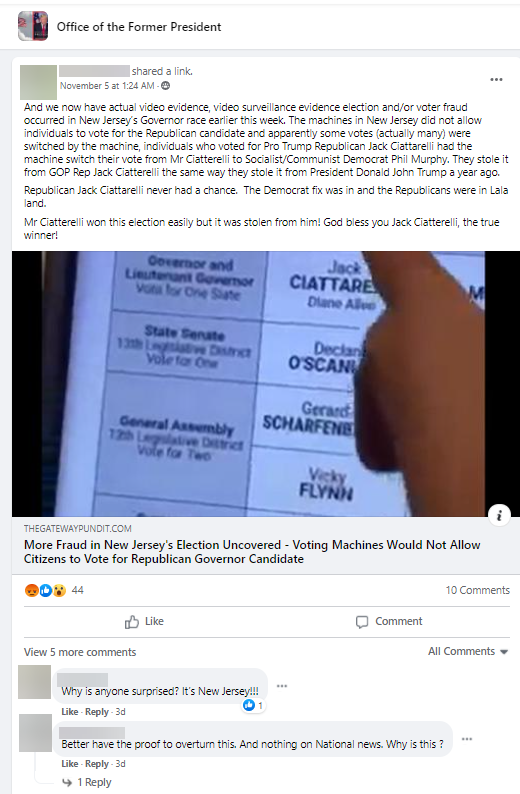 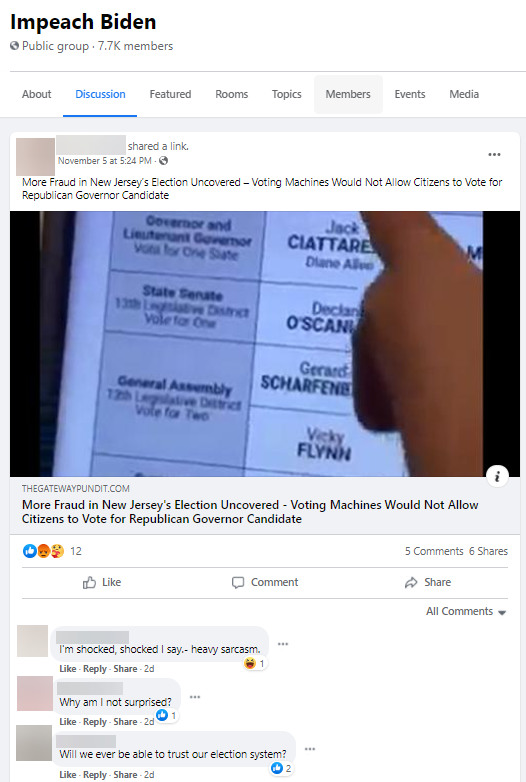 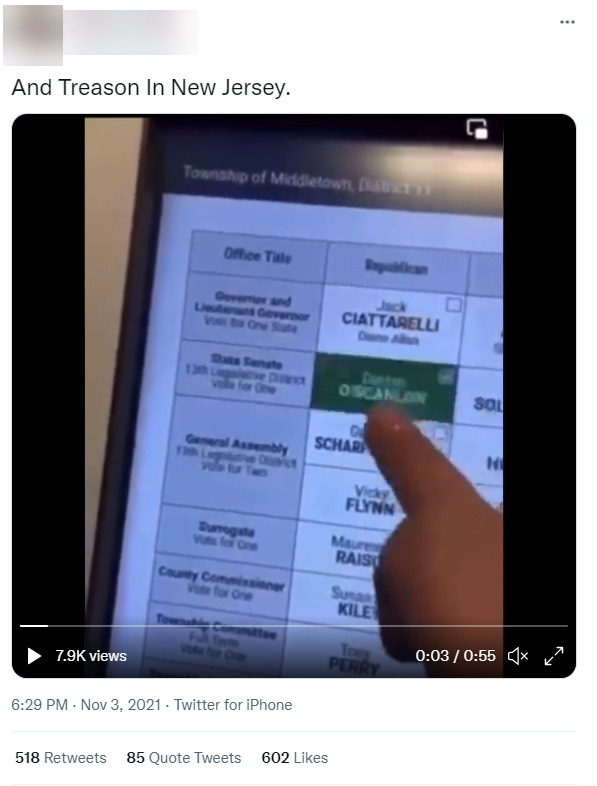 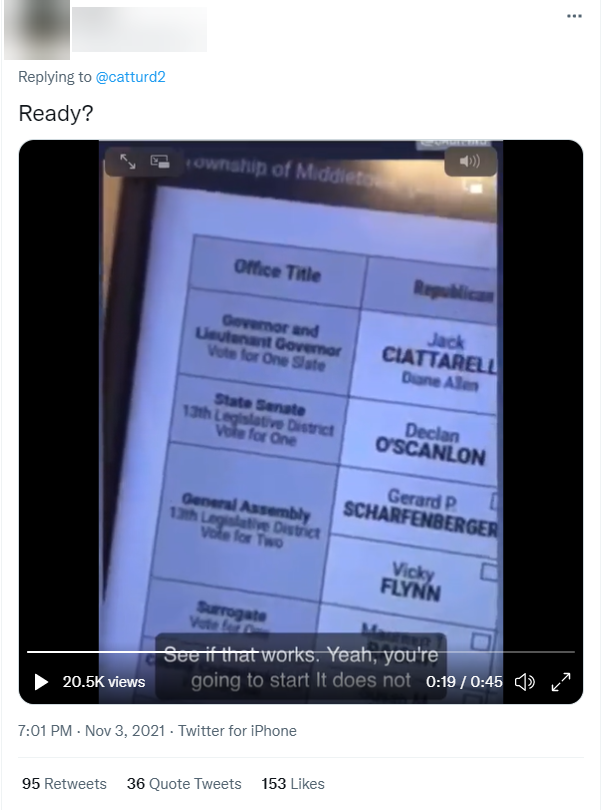 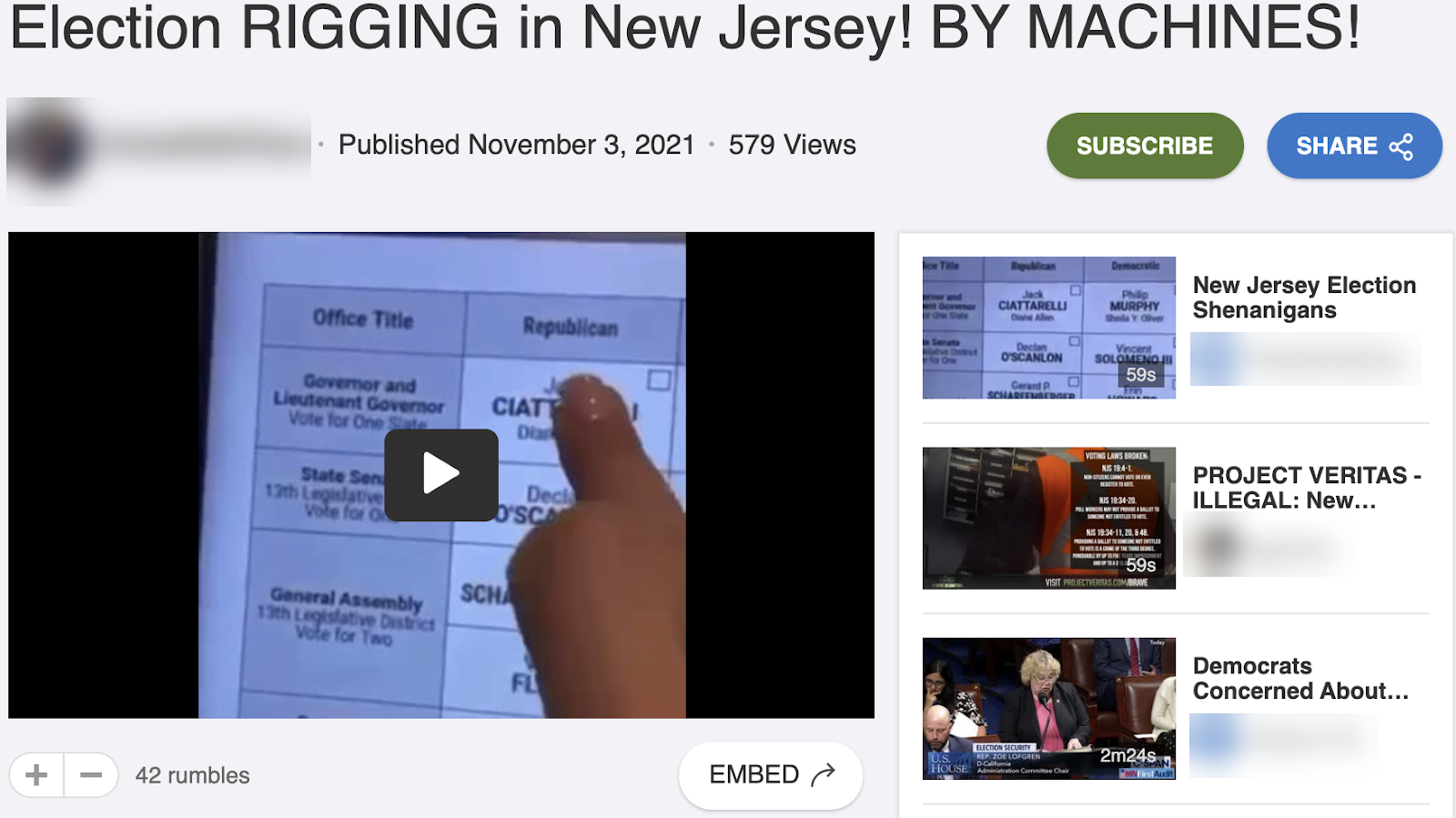 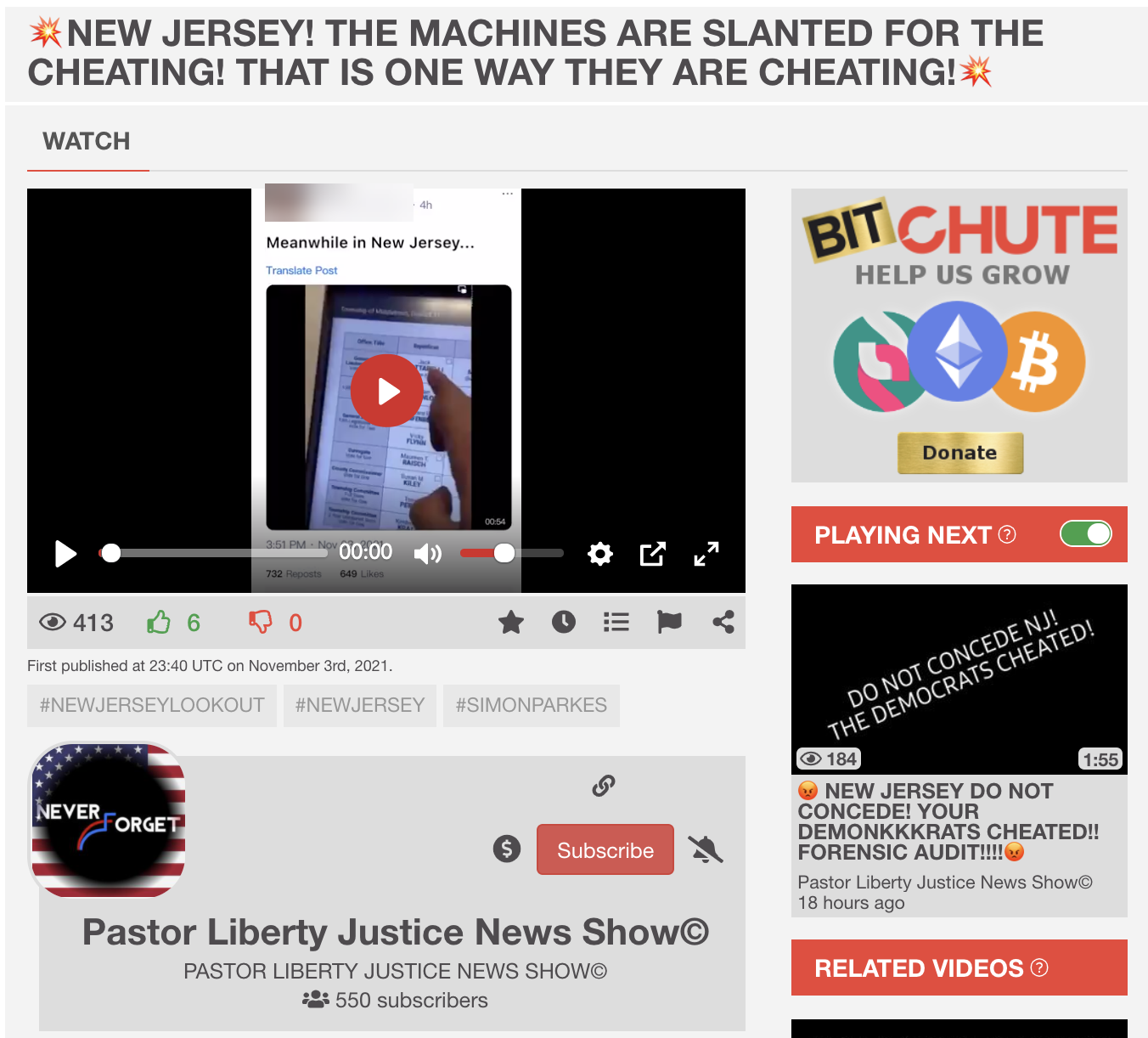 Baseless claim: Trash bins outside the Gloucester County Board of Elections were filled with ballots

The unsubstantiated claim that trash bins in Gloucester County were filled with “blank” and “shredded” ballots from the election was shared thousands of times, particularly in the Facebook group “Political Correctness Gone Wild.” There were multiple debunks of this claim, noting that the videos actually depicted outdated envelopes and instructional inserts as well as “spoiled ballots that were not viable for any electoral use.” Facebook has labeled at least one of the posts “false information,” but it has failed to label other posts. 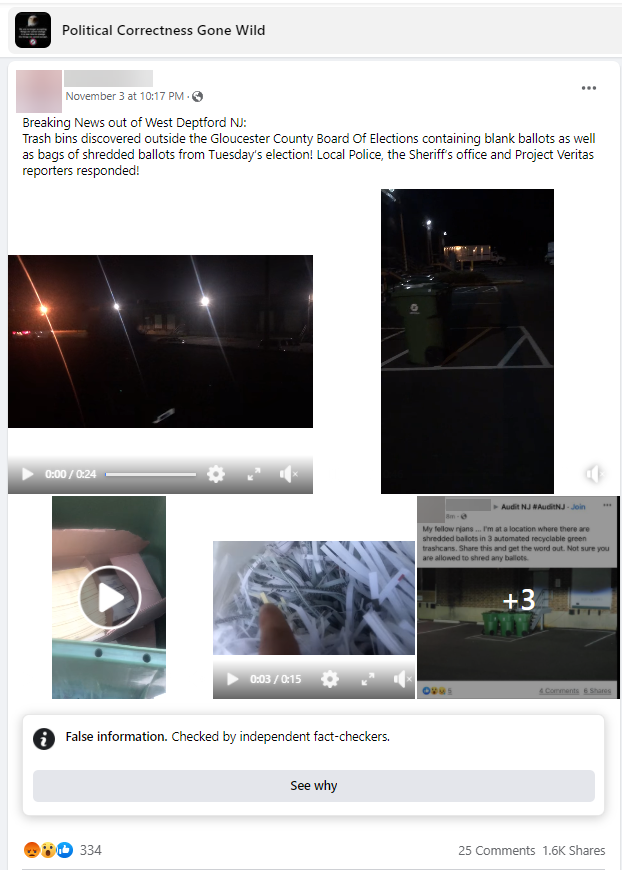 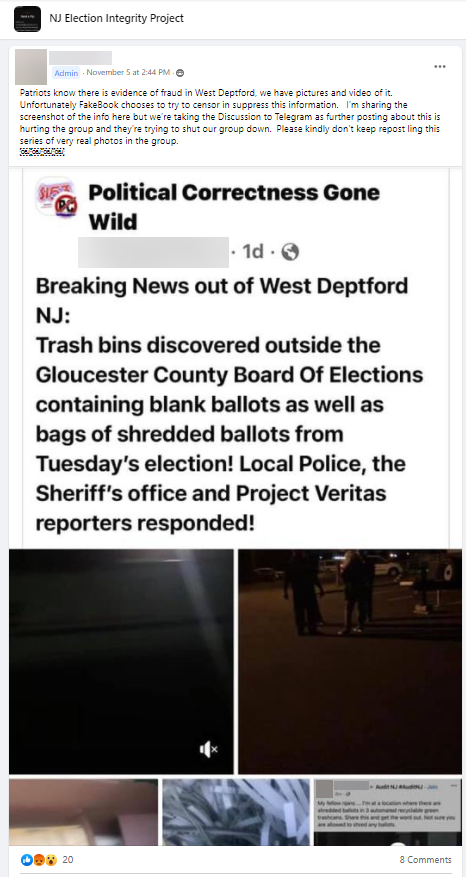 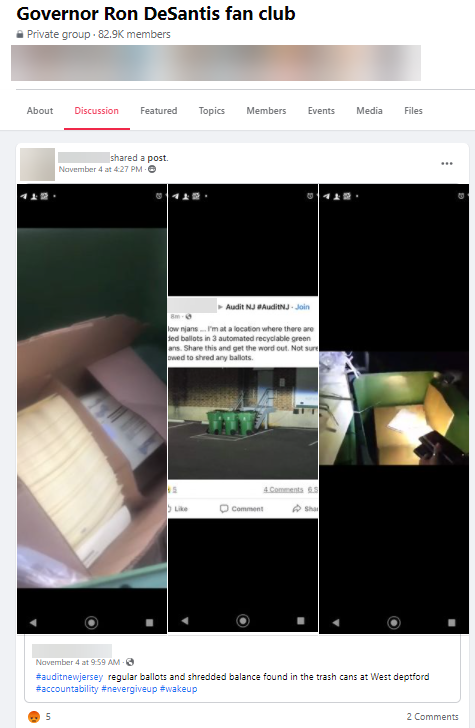 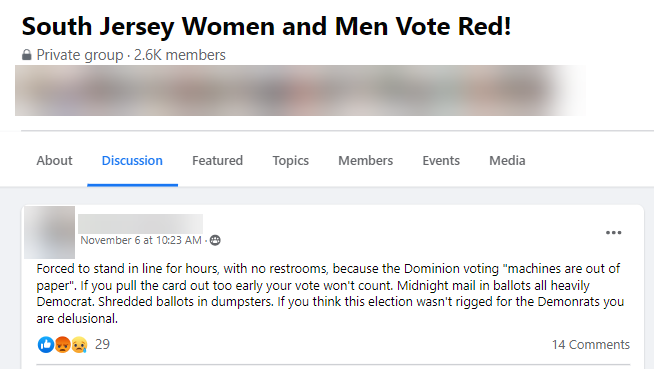