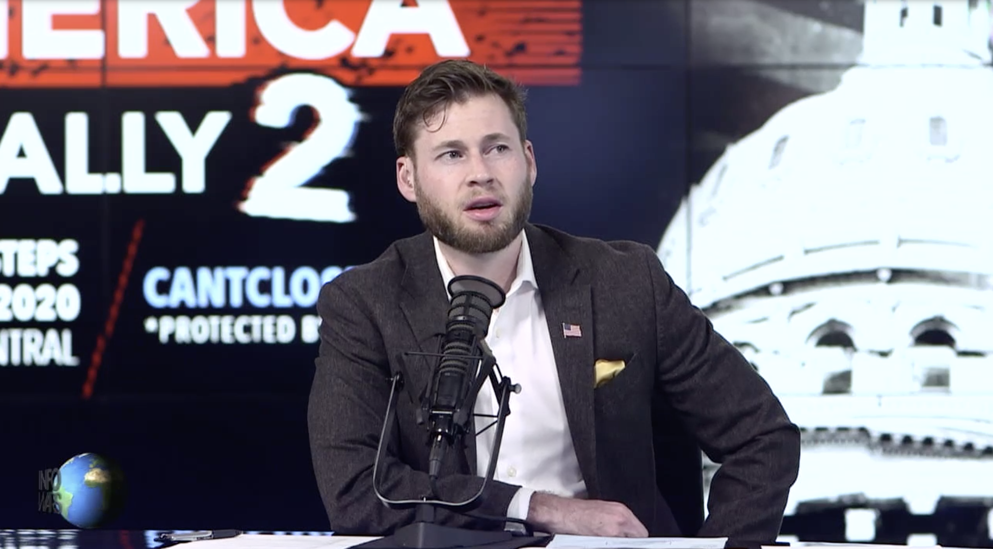 Far-right conspiracy theory outlet Infowars is organizing a second rally in Austin, TX, after host Owen Shroyer held a gathering at the Texas Capitol steps on April 18. During the April 18 rally, a few hundred people stood in close quarters with Shroyer and Infowars founder Alex Jones.

Texas is currently under a stay-at-home order because of the novel coronavirus outbreak. Republican Gov. Greg Abbott has begun issuing executive orders to lessen some restrictions, though social distancing guidelines remain. For example, while state parks have reopened, park visitors are not supposed to gather in groups of more than five.

During the April 18 rally, Shroyer -- who has said that reports of large numbers of U.S. coronavirus deaths are Chinese government propaganda and has repeatedly promoted the conspiracy theory that hospitals are actually empty -- led participants in chants, which included one calling for the firing of Dr. Anthony Fauci. Jones made an appearance and, after speaking, walked through the crowd and shook hands.

During the April 20 broadcast of his Infowars show War Room, Shroyer announced a follow-up rally this weekend in Austin. An article at Infowars.com explains that “Infowars is calling for another rally to show the establishment we will continue to exercise our rights until these draconian orders are lifted” and encourages supporters to share details of the event by getting “this link out to everyone you know!"

Discussing his April 18 rally, Shroyer said on his show that Jones had called him and was “pleased” with the rally and asked him to “double, quadruple down.” Shroyer claimed that people traveled from various parts of the country to attend the first rally and hoped that would happen again at his follow-up rally. He also suggested that his rally is a positive alternative to people participating in widespread looting, claimed that Fauci is trying to “collapse the economy,” and responded to people who have said Shroyer could help spread the coronavirus by saying, “Kiss my ass.”

Later during his show, Shroyer told Infowars supporters that they’re “going to have to make a sacrifice” by taking actions such as not wearing a mask in public or getting arrested or fined for violating public health orders. He also lashed out at people who criticized his event, calling The View’s Joy Behar, who called people who bring guns to rallies “terrorists,” an “anti-American scum bitch.”

Prior to the first rally, Shroyer was using his verified Twitter account to promote the event, but the account was permanently suspended before the rally took place. Shroyer has now turned to TikTok -- where he previously spread coronavirus conspiracy theories -- to promote his upcoming rally, though the platform claims it removes coronavirus content “related to misinformation that could cause harm to our community or the larger public.”