Instructional videos teaching users how to modify assault weapons at home to make them fully automatic, create their own ammunition, and purchase potentially illegal gun conversion kits are hosted and shared on TikTok, even though they seemingly violate the platform’s community guidelines.

TikTok is heavily saturated with firearm content, and it appears that the company is allowing much of that content to remain functionally unregulated. With an uptick of far-right militia content on the platform, as well as reports that a third of its users may be aged 14 or under, it’s time for TikTok to prioritize the safety of its community.

There is little transparency about how TikTok moderates firearm content, and the company itself has provided conflicting information. Gizmodo first reported on the presence of content featuring guns on TikTok and the company’s contradictory policies in May 2020, but the problems seem to have worsened since.

According to TikTok’s weapons policy, the company prohibits “the depiction, promotion, or trade of firearms, ammunition, firearm accessories, or explosive weapons,” as well as “instructions on how to manufacture those weapons.”

This policy is followed by a contradictory statement, walking back the initial hard line: “Content as part of a museum's collection, carried by a police officer, in a military parade, or used in a safe and controlled environment such as a shooting range may be allowed.”

Immediately after this disclaimer, TikTok forbids users from even displaying firearms and firearm accessories: “Do not post, upload, stream or share ... content that displays firearms, firearm accessories, ammunition, or explosive weapons.” TikTok also prohibits “content that offers the purchase, sale, trade, or solicitation of firearms, accessories, ammunition, explosive weapons, or instructions on how to manufacture them.”

Since TikTok’s firearm policies appear to be vague and contradictory, consistent enforcement seems to be an impossible task, leaving sizable loopholes for accounts to skirt these restrictions.

Hashtags used for firearm content on TikTok appear to be unmoderated and have billions of views. The following hashtags contain unregulated firearm content that is easily found on the platform. (This is not a comprehensive list, but a sample of commonly used hashtags.) 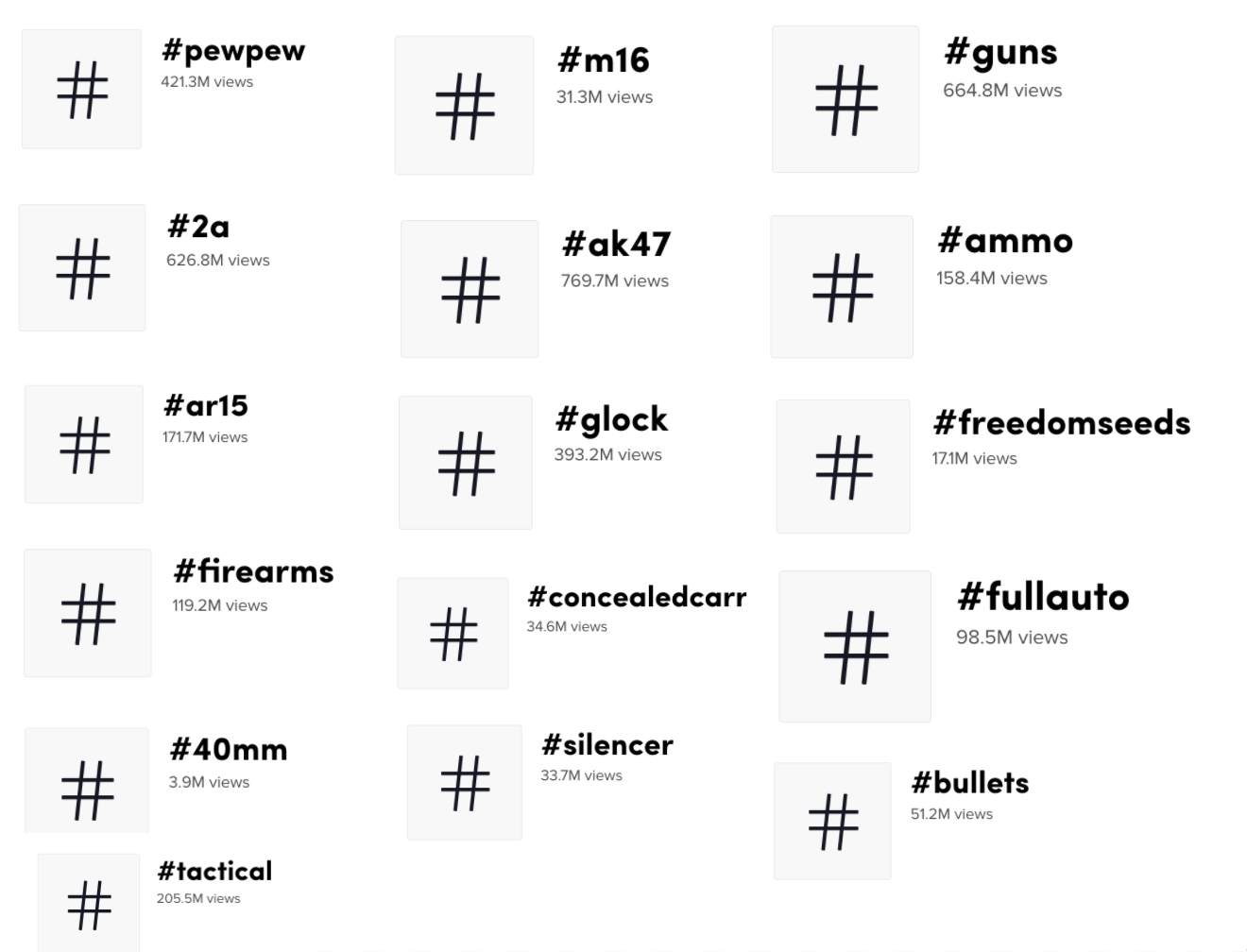 CAA USA is a company that sells handgun conversion kits, which are a workaround used to evade federal restrictions that enable handguns to use a brace or stock and be fired from the shoulder like a rifle. In 2019, a shooter used a similar workaround in a mass shooting in Dayton, Ohio, which resulted in nine deaths and dozens of injuries. Because of how quickly the shooting unfolded -- lasting just 30 seconds -- early reports described the shooter using an “assault rifle.” It was only later discovered that the shooter’s weapon was technically a pistol with a workaround to use “a barrel that's shorter than the federal minimum for a rifle.”

On TikTok, CAA’s account has over 33,000 followers and directs TikTok users to a website to purchase its products, where it also notes that those conversion kits can be used to manufacture a “short-barreled rifle” which “may not be lawfully possessed unless it is registered in the National Firearms Registration and Transfer Record.” 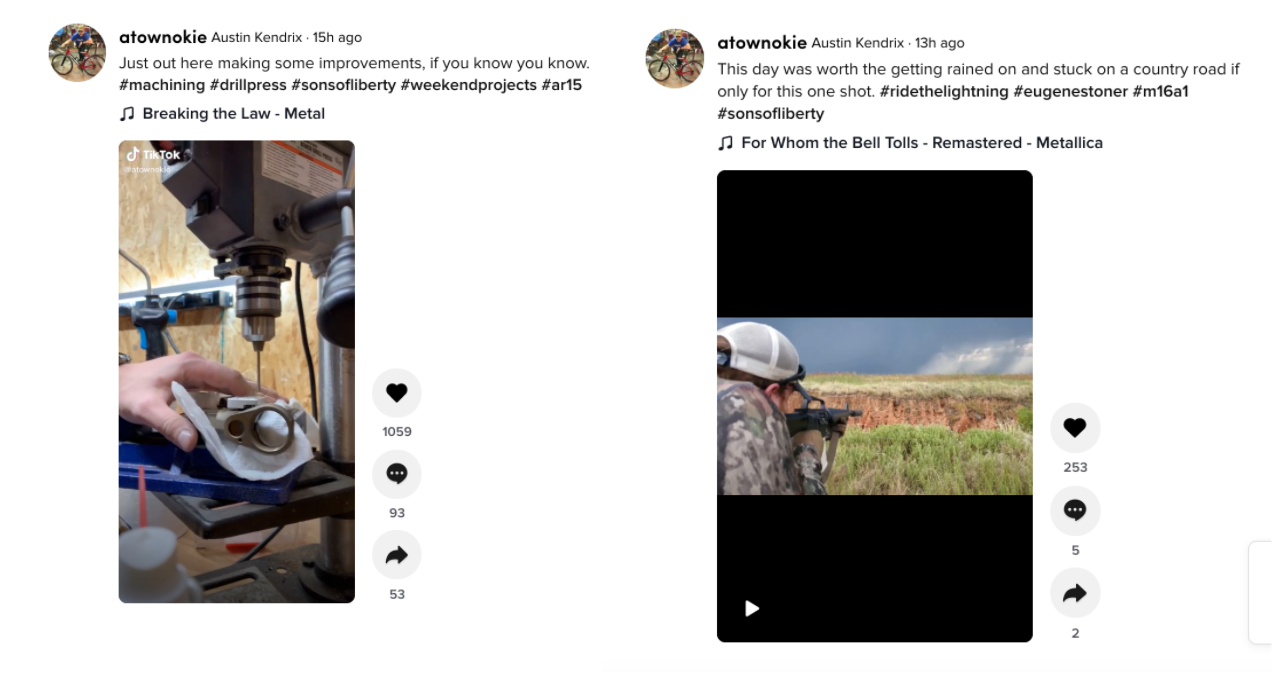 Build your own gun

In other instances, users are able to demonstrate processes for building their own firearms. One user, who appears to be an adherent of the Three Percenter militia movement, uploaded a video of building his own firearm, allegedly with parts purchased from a hardware store. “I lost all my [guns] in a voting accident, nothing to see here except a 40$ home depot receipt. Taken down at 2k no tags this time,” the caption reads. The video ends by showing viewers that the improvised firearm can shoot. It has over 1 million views. 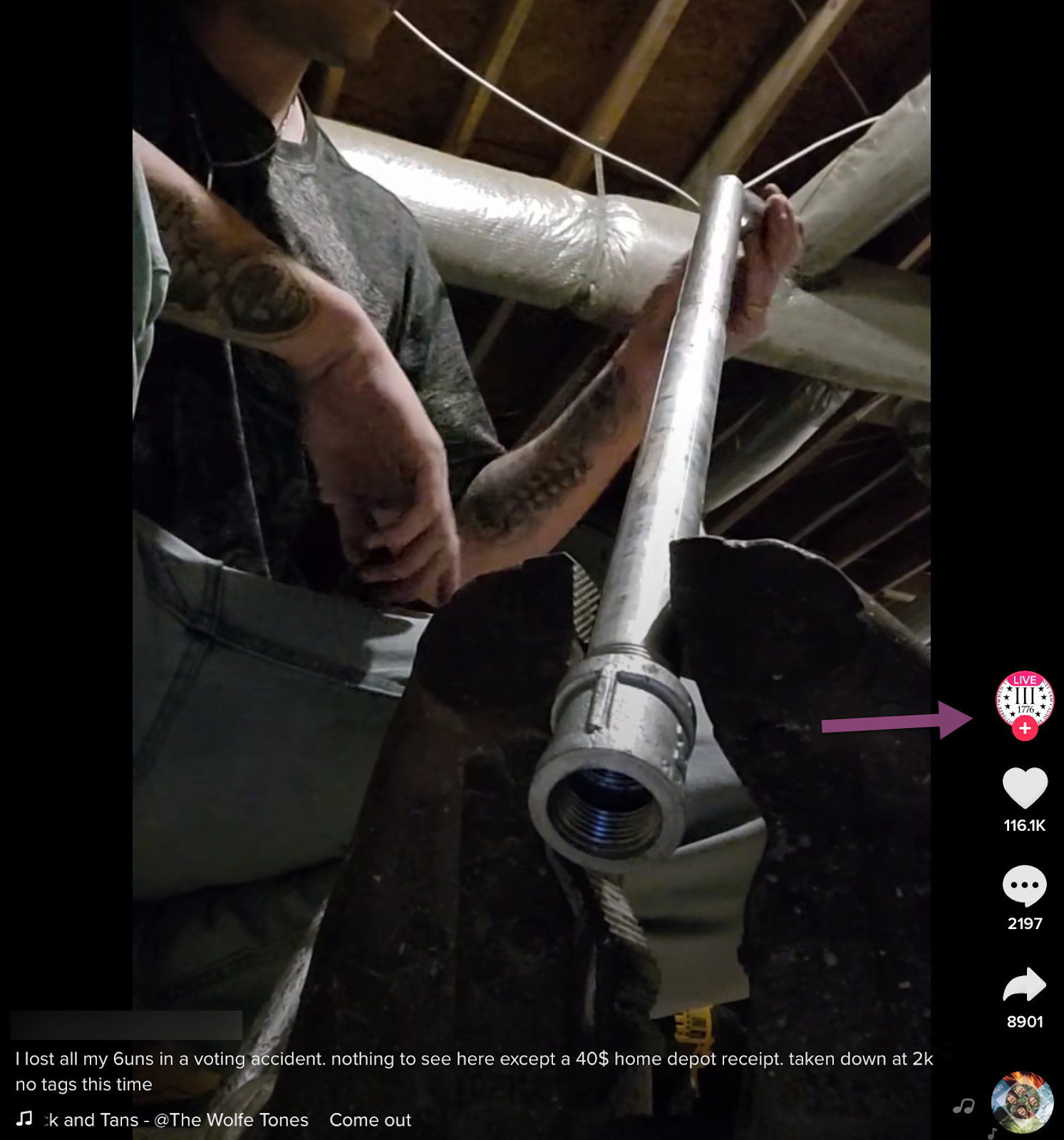 In a different video, a user appears to be manufacturing a firearm with a 3D printer, captioning it “#ar15” and “#3dprinting.” 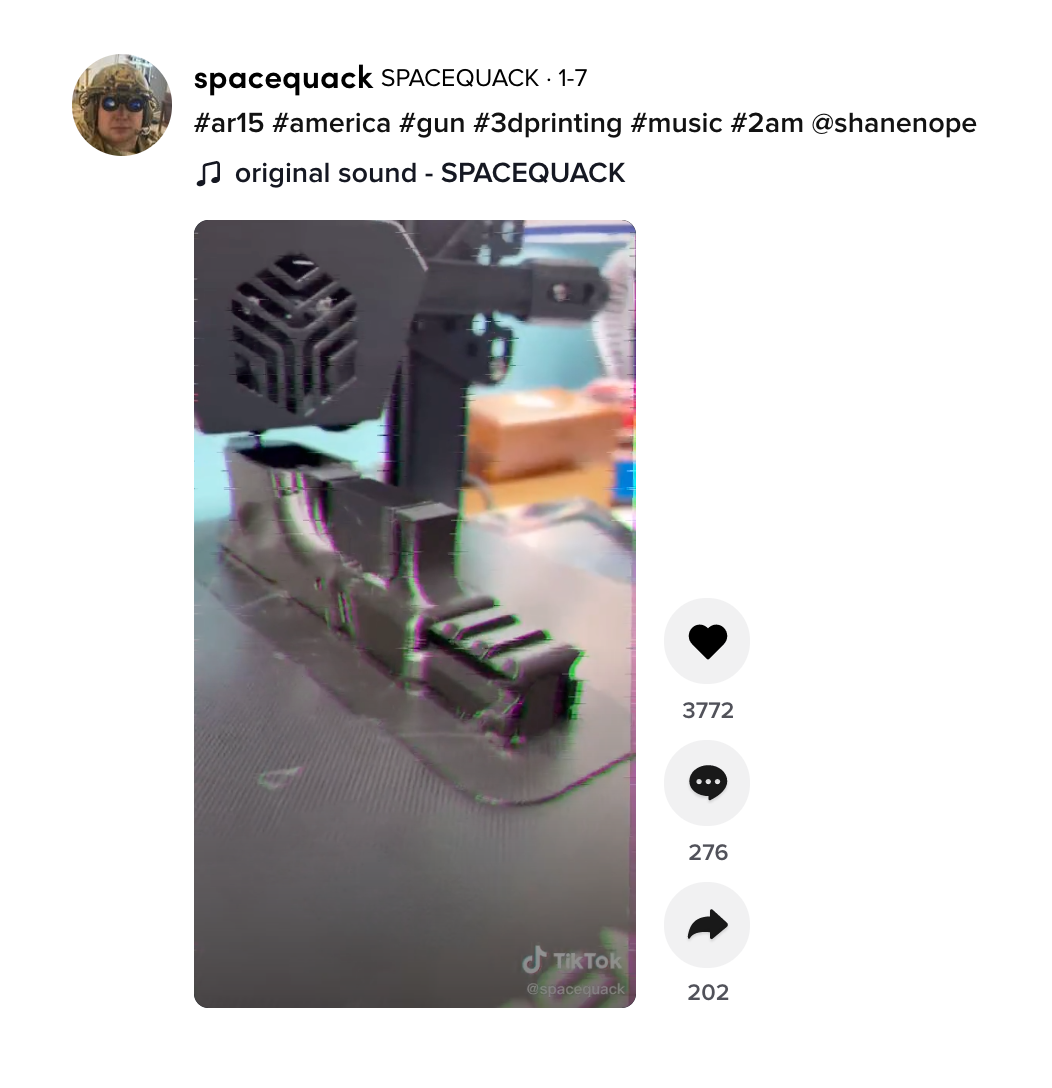 The hashtag “#HomeMadePew” refers to homemade ammunition and has over 10 million views. 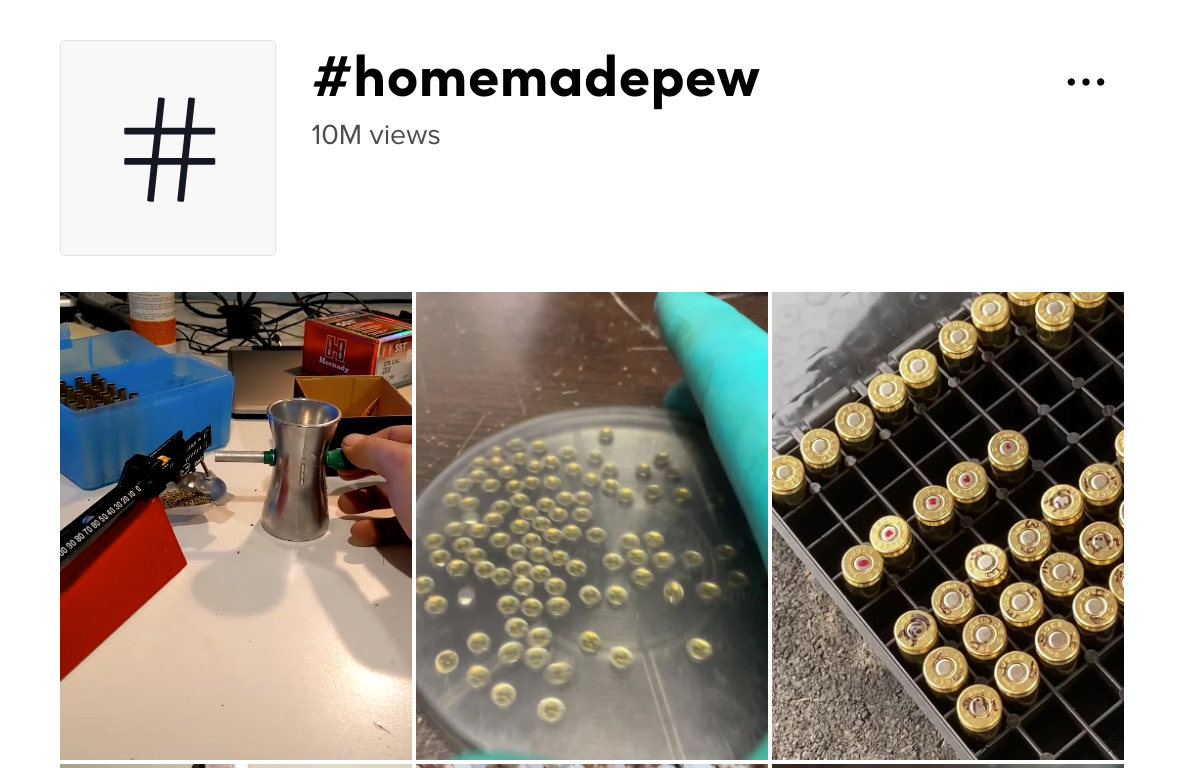 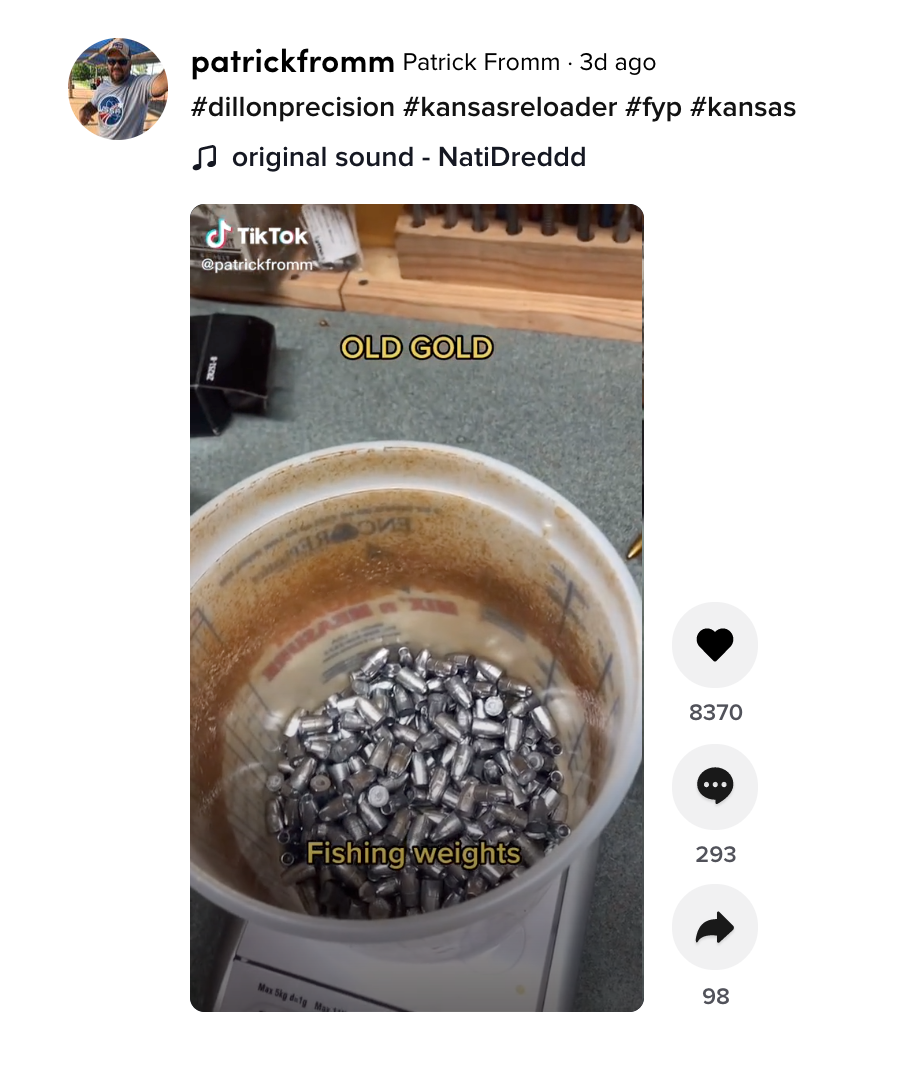 Ammunition companies use TikTok to sell their products

Ammunition companies and dealers also market their products on TikTok. For example, LAX Ammunition has a popular account with over 74,000 followers and directs users to its website, which is linked on TikTok. The company also updates users on ammunition it has in-stock and available for sale through its site. 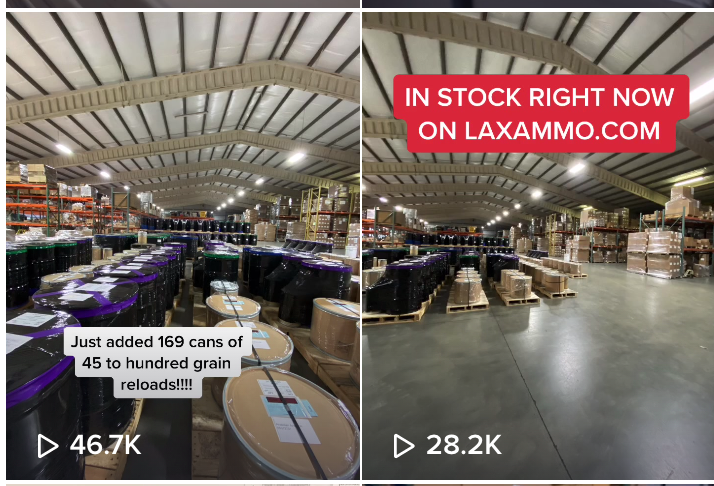