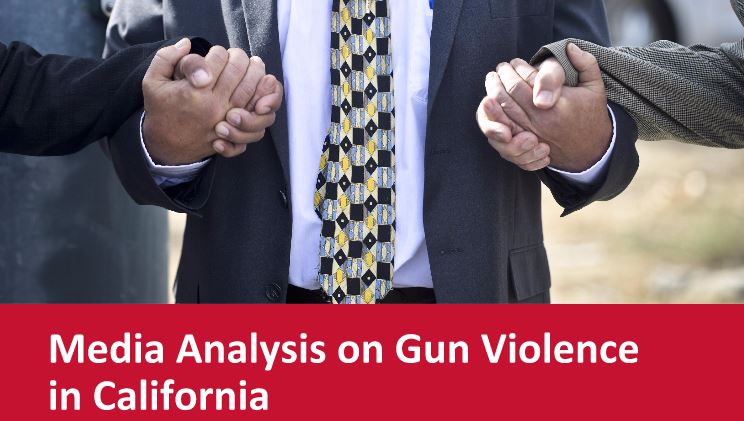 The media conversation on gun violence in California has been driven by instances of mass shootings and focused primarily on legislative solutions, according to a new report commissioned by Hope and Heal Fund. Meanwhile, the report found everyday gun violence including suicide, domestic violence, and community violence goes unnoticed in the media coverage – as do the community-based solutions that can help alleviate the bloodshed.

Hope and Heal Fund, a pooled fund working to stop gun violence in California, commissioned the media scan of nine regional newspapers to better understand the current conversation about gun violence in the state and identify previously overlooked opportunities to talk about everyday gun violence. The scan analyzed 218 news stories and opinion pieces in nine major newspapers in California from December 1, 2015, to January 1, 2017. 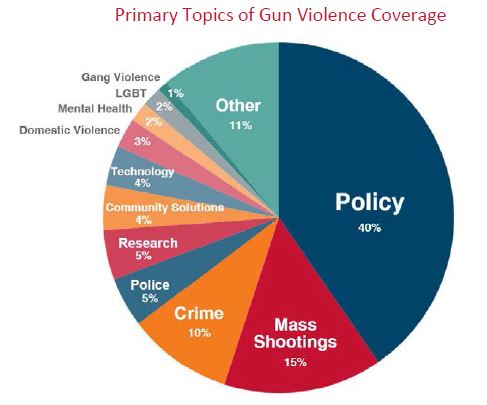 Mass shootings sparked and sustained most of these policy-heavy discussions in the newspapers. The shootings in San Bernardino, CA, and at Pulse nightclub in Orlando, FL, in particular prompted calls for policy change at both the state and national level. The press, however, didn’t cover day-to-day gun violence in any meaningful way; less than 3 percent articles focused on domestic violence, and less than 2 percent focused on the link between guns and suicide.

Politicians accounted for almost 40 percent of all quotes in the policy-dominated discussion about gun violence and potential solutions, with Democrats being more likely to talk about gun violence than Republicans. Politicians were quoted more than gun violence prevention funders, researchers, advocacy groups, and victims of gun violence combined. The gun lobby was the next most quoted group after the politicians, with its representatives making up 12 percent of the messengers quoted in news coverage around gun violence. 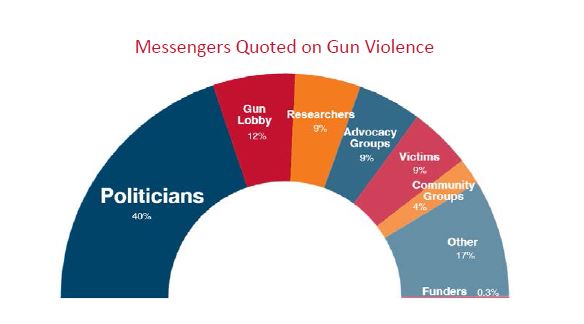 The study also found that the media often contrasted California’s strong gun regulations to other states with weaker laws, contributing to a narrative that there is little more to be done at the state level to decrease gun violence. Press coverage effectively overlooked the importance of investing in smart-gun technology and research and community-oriented programs to combat gun violence. Only 4 percent of the coverage focused on community-based solutions that are already working to stop gun violence and can be replicated across the state.

In light of these findings, the report included several recommendations that could be helpful for the press as it covers gun violence, including:

Elevate community voices and solutions to gun violence. Position community leaders and those directly impacted by gun violence as the primary messengers. They can speak most effectively to how the problem manifests in their communities and what it will take to solve it.

“Hope and Heal Fund is committed to changing the conversation on gun violence and advancing solutions that are already working to prevent violence in communities across the state,” Malte said.

Founded in 2016, Hope and Heal Fund brings together a diverse group of funders to combat the gun violence epidemic. The fund invests in research, strategic communication, and on-the-ground programs to address “all forms and root causes of gun violence, including violent crime, suicide, domestic violence and the socioeconomic conditions that can lead to violence.”

In response to the findings from the media scan, Hope and Heal Fund is investing in strategic communication to change the narrative on gun violence to one that is hopeful and solution-oriented. The fund has awarded its inaugural grant to Berkeley Media Studies Group to identify and position new messengers, including community leaders and gun violence survivors, to talk about the issue, and develop new messages that highlight the root causes of gun violence and advance potential solutions.

Disclosure: A co-author of the study discussed in this post is a previous employee of Media Matters.