In the early morning of March 21, a man suspected of killing and injuring several people in a string of bombings in Austin, TX, killed himself as police closed in on his location. Prior to authorities identifying him as 24-year-old Mark Anthony Coditt, right-wing internet trolls disseminated a number of reckless conspiracy theories about the suspect, and they continued to make irresponsible claims about the perpetrator even after he was identified. These are some of the hoaxes and false claims about the Austin bomber.

Conspiracy theorists speculated that an anonymous 8chan and 4chan user called QAnon “is the Austin bomber” and claimed the FBI is investigating him. On the online message board 4chan, a poster using the name QAnon posted a thread interpreted as predicting the Austin bombings, prompting some 4chan users to speculate that QAnon may be responsible for the bombings. Some QAnon conspiracy theorists also claimed that the post was used to allow the FBI to investigate QAnon.

Reddit AMA with user claiming to be the Austin bomber implied that Alex Jones may be a target. A Reddit user with the name “austinbomber” hosted an Ask Me Anything (AMA) session in which he or she wrote, “There will be another explosion within the next three days ... at a prolific radio-talk show host's house.” Some participants and right-wing Twitter users speculated that this was a reference to pro-Trump conspiracy theorist Alex Jones.

Pro-Trump Twitter users amplified a theory that London Mayor Sadiq Khan orchestrated the Austin bombings to retaliate against Trump for “[standing] against #Terrorism.” In a post that was retweeted over 1,000 times, a Twitter user by the name of “Patriot Kimberlee” questioned the timing of Khan’s trip to Austin and the bombings, linking to a Breitbart article that claimed he was traveling to Austin with the intention of advocating for increased censorship. 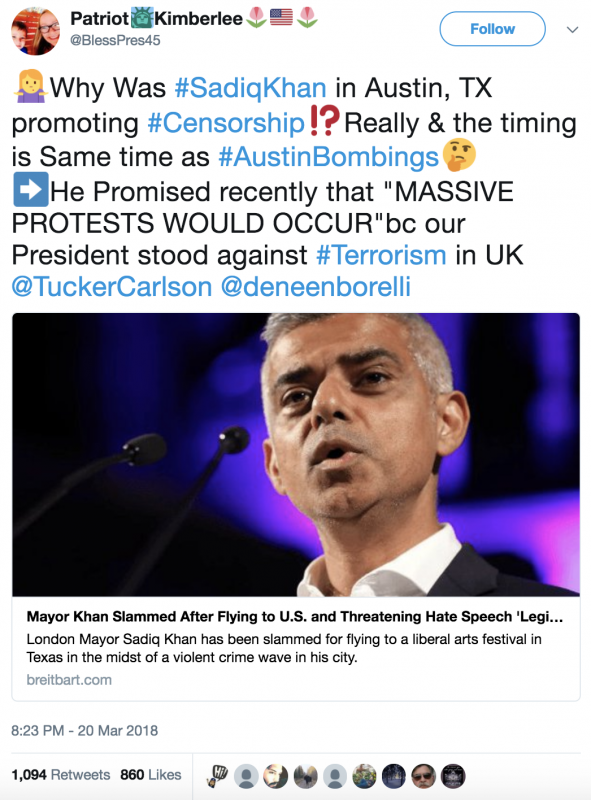 Some Twitter users rushed to identify bombing suspect Mark Anthony Conditt as a “leftist” and member of Antifa. One Twitter handle baselessly claimed that Facebook “scrubbed” Mark Conditt’s profile because he was a “leftist.” A network of fake antifa handles that had previously pushed viral conspiracy theories about the Parkland school shooting on Twitter also spread various false identifications of Conditt. One handle shared a seemingly fake Facebook post and stated that Conditt was a member of Nashville’s Anti-Racist Action group. Another tweeted out a picture of Sen. Tim Kaine’s (D-VA) son, saying he was the Austin bomber. 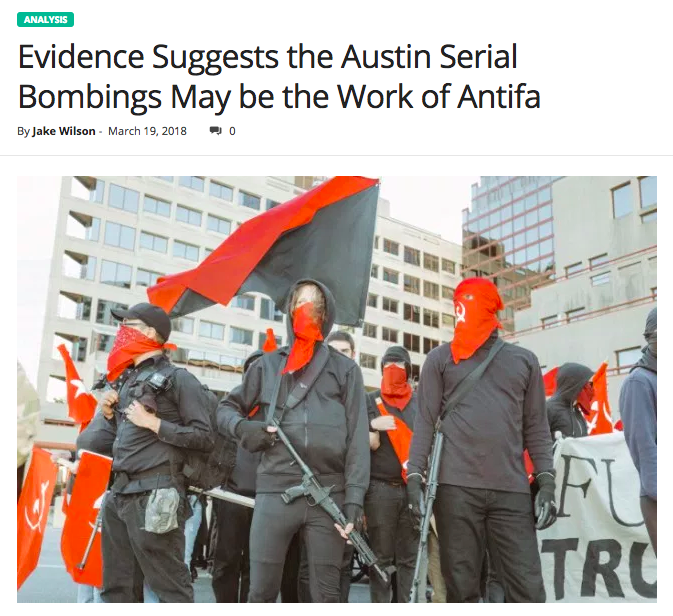