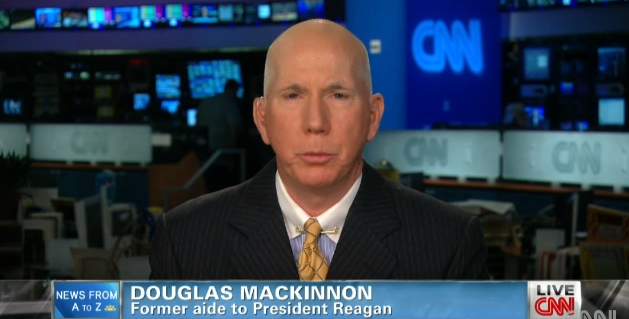 A conservative columnist for the Tampa Tribune criticized the Walt Disney Co. for allegedly pushing a “pro-gay agenda,” asserting that the company is using its programming to “indoctrinate” children about “gay lifestyles and gay marriage.”

In his August 12 column, Douglas MacKinnon - a former aide to Presidents Ronald Reagan and George H. W. Bush - charged that Disney was peddling the “gay agenda” to “impressionable children” by exposing them to “openly gay characters and couples”:

Beginning with the takeover of the company by Michael Eisner in 1984 and continuing under the leadership of Robert Iger since 2005, it can be argued that Disney has been working overtime to redefine “family values.”

Back in the late 1990s when I worked with former Sen. Bob Dole, I had the pleasure to interact with Iger. He was professional, respectful and could not have been more kind or considerate. Since taking over, he has only made the company more profitable. But beyond his fiscal responsibility to shareholders, does Iger have an even greater responsibility to impressionable children?

Disney has made no secret that it pushes a pro-gay agenda. That is most certainly its right. But where does the company draw the line? A former Disney executive I spoke with told me the company has taken direct aim at children to indoctrinate them about gay lifestyles and gay marriage through shows it airs on The Disney Channel and Disney XD.

The former executive said one of the more subtle techniques is to incorporate the colors of the gay-pride flag in as many shots as possible. The colors are woven in as a wink and nod to the gay community and show up on shirts, hats, posters, stacked cups and rings. The practice has been picked up by other children's networks and national advertisers.

Disney also pushes the gay agenda by introducing openly gay characters and couples on its children's programing. Again, that is their right, but should they be in the business of entertaining children or indoctrinating them? [emphasis added]

MacKinnon never explains what harm might be caused by featuring gay-inclusive programming - suggesting that he sees an inherent harm in simply letting children know that gay people exist and have families.

MacKinnon's attack on Disney's alleged “pro-gay agenda is just the latest in the columnist's history of rabid right-wing rhetoric.

As a syndicated columnist, he has staked out hardline positions and has often articulated decidedly paranoid views about President Barack Obama, whom MacKinnon once wrote ”has been handed most of his 'achievements' in life." MacKinnon has also dubbed the president a socialist. Just before the 2008 election, MacKinnon warned that if then-Sen. Obama ascended to the presidency, he would usher in a “draconian” leftist government by censoring conservative talk radio hosts and using “any means” necessary to “crush dissent.” The fact that Obama even had a chance of winning, MacKinnon suggested, meant that the United States didn't truly exist anymore. MacKinnon also proclaimed the “end of America” in 2007, declaring that the firing of radio host Don Imus after he called the Rutgers women's basketball team “nappy-headed hos” indicated that “truth and values” no longer had a place in America.

UPDATE: The Tampa Tribune has removed MacKinnon's column from its website. The Tribune published a new column by MacKinnon on August 14.