After the arrest of two black men in a Philadelphia Starbucks led to protests, and the corporation announced a day of “racial bias training” for its U.S. employees, multiple right-wing media figures reacted to the news by attacking “the cult of social justice warrior” and “the racism industry” for giving “national attention” to the incident. Some right-wing message boards promoted hoaxes designed to bring more controversy to the coffee chain. Several media figures gave an anti-Semite with white nationalist sympathies a platform simply because he trolled a Starbucks employee into giving him free coffee as “reparations.”

Two black men were arrested in a Philadelphia Starbucks

Two black men were arrested in a Philadelphia Starbucks as they sat waiting for a third person without buying anything. On April 12, Rashon Nelson asked to use the restroom at a Philadelphia Starbucks but was denied “because he wasn’t a paying customer,” according to an Associated Press report. Nelson returned to sit with his business partner, Donte Robinson, as they waited for a third person to arrive when, at the store manager’s request, police arrived to arrest the black men for trespassing. Though no charges were ultimately filed, the arrests sparked protests and prompted Starbucks to announce that, on May 29, “more than 8,000” of its U.S. locations will close for an afternoon so employees can undergo “racial bias training.” [The Associated Press, 4/19/18; The Washington Post, 4/17/18]

Fox contributor Kevin Jackson: The “cult of social justice warrior” forced an “isolated incident that never should have seen the light of day” into getting “national attention.”

Fox host Laura Ingraham: “How just is it to subject all Starbucks employees to the high-paid indoctrination of the racism industry because of the actions of one employee?”

Guest on Fox’s The Ingraham Angle: “Racial separatists are doing everything they can to exploit anything they can.” Commentator Horace Cooper also implied that Starbucks’ racial bias training constitutes a “violation of Title VII” of the Civil Rights Act.

Infowars’ Alex Jones: Black Americans should “go to Africa” if “America’s so bad”

Alex Jones to black Americans: “If America's so bad, the whole thing is, why don't you go to Africa?” pic.twitter.com/oAxNRNj4xM

Gab and 4chan message board “/pol/” pushed fake Starbucks coupons for a free drink for “people of color only.” The New York Daily News reported that far-right social network Gab used its Twitter account to share the fake coupons, but “the controversial website 4chan appears to be the source” of them. The article noted that the fake coupon had a QR code that, when scanned, redirected to a website displaying the N-word. Starbucks called the coupons “completely false.” [New York Daily News, 4/18/18; Business Insider, 4/18/18]

4chan’s /pol/ also pushed fake Starbucks fliers advertising bathroom access to homeless people. An April 19 thread on 4chan’s “politically incorrect” (/pol/) board encouraged users to “send the homeless to Starbucks” by posting fake fliers in the thread. The fake fliers vary in their wording, but they all announce some variant of the statement “Starbucks is committed to fighting homelessness,” noting that its stores “now offer access to restroom facilities, charging stations, and Wi-Fi to all. No purchase necessary.” 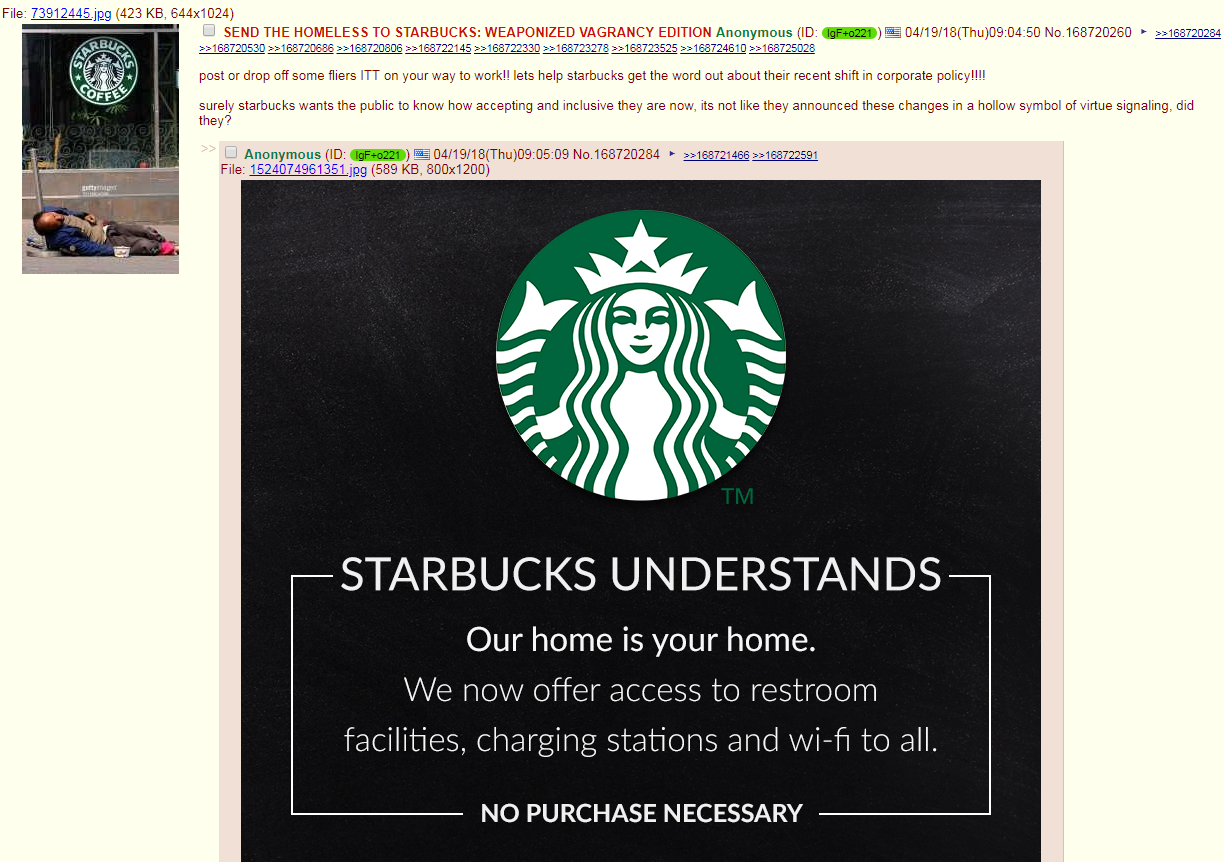 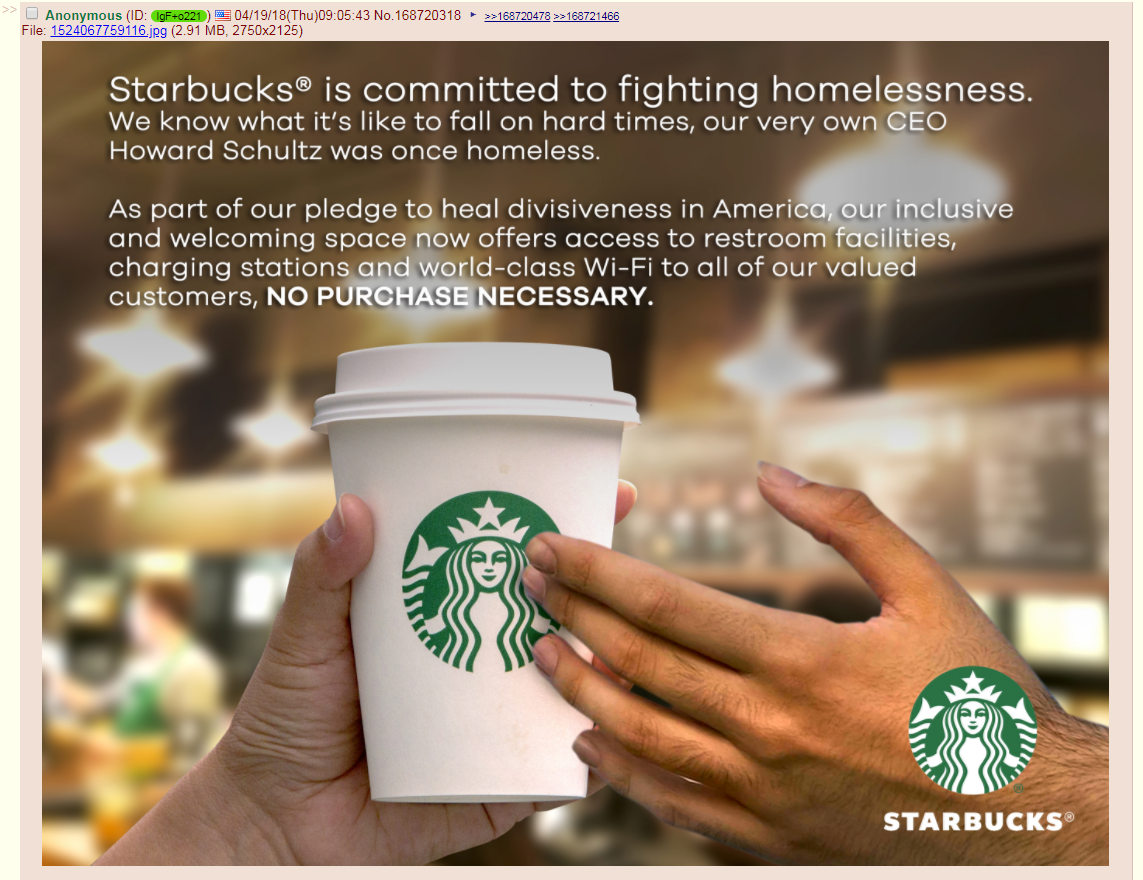 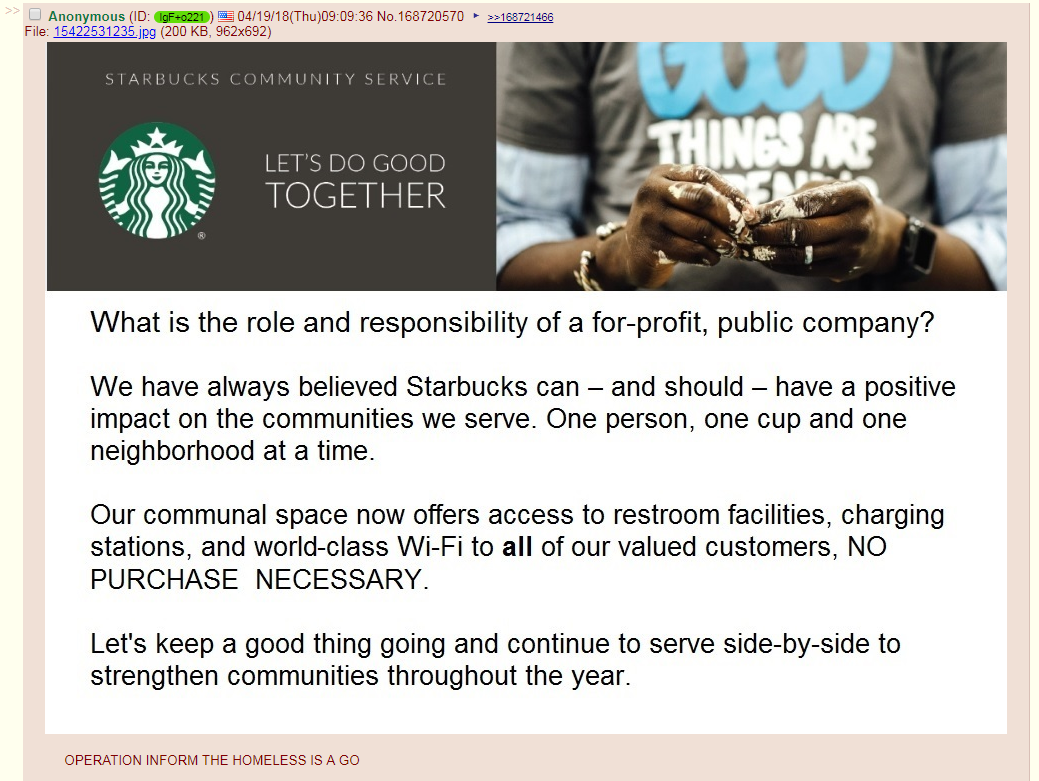 Multiple right-wing media figures promoted “Hotep Jesus,” a black anti-Semite with white nationalist sympathies, because he trolled a Starbucks employee into giving him free coffee as “reparations.” As reported by Jared Holt at Right Wing Watch, “Bryan Sharpe, who uses the moniker ‘Hotep Jesus’ online, has acquired overnight support from right-wing media” in the wake of a video he posted in which a Starbucks employee gives him free coffee as “reparations.” Sharpe’s video was shared by conspiracy theory websites Infowars and WorldNetDaily, popular right-wing news aggregator The Drudge Report, Glenn Beck’s TheBlaze, and right-wing talk radio host Rush Limbaugh, among others, even though “Sharpe has aligned himself with the white nationalist alt-right movement.” Sharpe appeared on Fox News’ The Ingraham Angle to discuss his video, and host Laura Ingraham told Sharpe, “You sound like Chris Rock.” [Right Wing Watch, 4/18/18; Fox News, The Ingraham Angle, 4/18/18]