Continuing their long history of engaging in race-baiting attacks against President Obama, right-wing media figures have accused Obama, his administration, and the progressive movement of trying to start a “race war” in order to divide the public and “seize absolute power.” 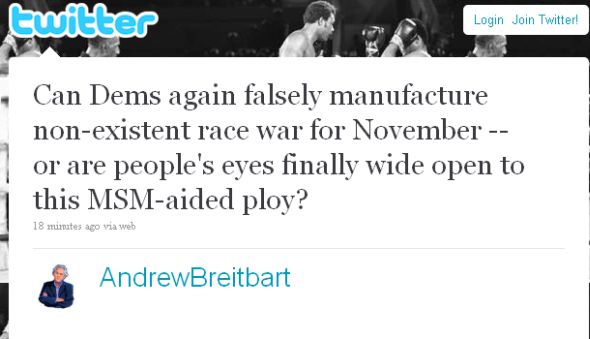 Media conservatives repeatedly attack Obama and his administration as “racist.” Since July 28, 2009, when Glenn Beck called President Obama a “racist” with a “deep-seated hatred for white people or the white culture,” right-wing media figures have routinely called Obama and members of his administration “racist.” During the March 9 edition of his Fox News show, Sean Hannity defended Beck's statement, questioning whether Beck had said anything “over the top.” Rush Limbaugh echoed these remarks when, after citing a campaign video in which Obama discussed voter turnout, including among minorities and women, he said, “This is the regime at its racist best.” Discussing the phony New Black Panthers scandal, radio host Jay Severin said Obama is “demonstrably a racist.” Right-wing media figures have also labeled Obama administration officials -- including Eric Holder and other members of the Department of Justice -- “racist,” accusing them of blatant reverse discrimination and of having “allowed and even encouraged race-based enforcement as either tacit or open policy."

Right-wing media level a wide variety of racially charged attacks against Obama. In addition to blatantly calling Obama a “racist,” conservative media figures have engaged in other race-baiting attacks and have fired off a litany of vituperative allegations against the president. On the July 6 edition of his radio show, Limbaugh said that “If Obama weren't black he'd be a tour guide in Honolulu.” During the same edition of his show, Limbaugh claimed that Obama “wouldn't have been voted president if he weren't black.” Beck continued his race-based fearmongering by warning that Obama's agenda is driven by “reparations” and a desire to “settle old racial scores.” On Fox News, radio host Laura Ingraham said the Obama administration has “set back race relations in this country perhaps a generation.”